This study was designed to identify the prognostic value of early response to neoadjuvant chemotherapy (NACT) for long-term survival of cervical cancer patients. We searched Pubmed and EMBASE for studies published through July 2016 on outcomes of cervical patients that received NACT. Eight studies involving 825 cervical cancer patients were ultimately included in our meta-analysis. We pooled the hazard ratios (HR) according to random-effects models and used funnel plots with Egger’s and Begg’s tests to explore potential publication bias. The HR between early response and 1-year overall survival (OS) was 3.60 (95% CI 1.93–6.72; I2 = 0). Similar results were found in the analysis of 3-year OS (HR 3.34; 95% CI 2.28–4.90; I2 = 0) and 5-year OS (HR 3.44; 95% CI 2.40–4.94; I2 = 0). Sensitivity analysis showed that all of the pooled results were robust, and all logHRs had confidence limits > 0. Our findings indicate that early response is associated with long-term survival, and responders achieved a higher survival rate than non-responders.

Cervical cancer is one of the most common cancers in females, second only to breast cancer in developing countries [1]. According to the latest report, there are 527,600 new cases and 265,700 deaths across the world every year [1]; there were 98,900 new cases in China in 2015 [2]. NACT plus surgery, has emerged as a new hope for cervical cancer patients [3–5] and an alternative to traditional therapies, such as radiotherapy or concurrent chemoradiotherapy. First, NACT often reduces tumor size [6], eliminates distant micro-metastasis, and thus makes surgery easier [7–9]. This is particularly important to patients in developing areas [10, 11], where sophisticated radiation equipment and expert radiologists are rare [11]. Second, for patients who cannot endure radiation, NACT largely protects vaginal and ovarian function. As a result, patients enjoy a relatively high quality of life, compared with those who receive traditional radiation therapy [12]. Third, with the help of NACT and radical trachelectomy, young women with cervical cancer can preserve their fertility [12, 13], even for those who are already pregnant at the time of treatment [14].

However, it remains controversial whether early response to NACT is an indicator of long-term survival in patients with cervical cancer, as previous studies provide conflicting results. We designed this study to identify the prognostic role of clinical response on OS by making a pooled analysis of the results from published studies. 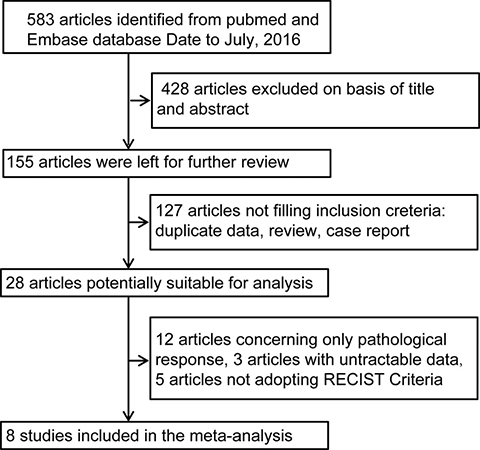 Table 1 shows the characteristics of the included studies, all of which reported clinical response and OS. Three articles were excluded from further analysis because they did not include detailed HR or survival curves of CR/PR vs. PD/SD (CR, Clinical Response; PR, Partial Response; PD, Progress Disease; SD, Stable Disease). Five articles were excluded because they did not use Response Evaluation Criteria in Solid Tumor (RECIST) criteria in evaluating the clinical response. The eight included studies consisted of 825 patients with 596 responders and 229 non-responders. Six studies came from Asian countries, and two came from European countries.

The HR for 1-year OS was significantly correlated with response using the random-effects model, as shown in Figure 2. The pooled HR was 3.60 for non-responders with 95% CI 1.93–6.72, compared with responders. No significant heterogeneity was observed across the studies (P = 0.97, I2 = 0). The same pooled HR with 95% CI 1.93–6.72 was detected in the fixed-effect model. 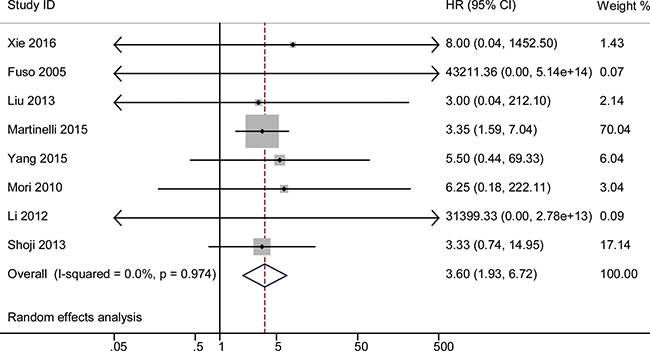 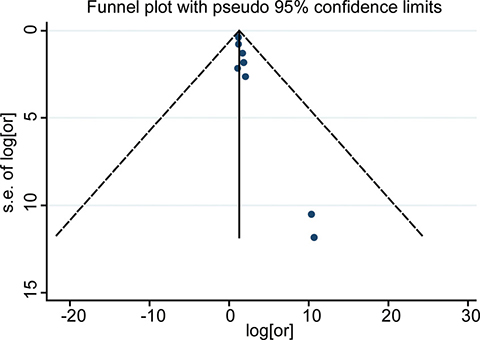 Figure 3: Funnel plots for detection of publication bias of HR for 1-year OS. The pseudo 95% CI is computed as part of the analysis that produces the funnel plot, and corresponding to the expected 95% CI for a given standard error (SE).

Sensitivity analysis was performed to detect potential heterogeneity and to identify the origin of any heterogeneity. Individual studies were excluded in turn, and the results of the remaining studies were pooled. The pooled HRs slightly differed with each other, but they did not change much across the sensitivity analysis. Figure 4 illustrates that the logHRs were distributed across a range from 0.31 to 2.59. These findings mean that the HR was significantly larger than in reference 1, and that no individual study will influence the final pooled HR. 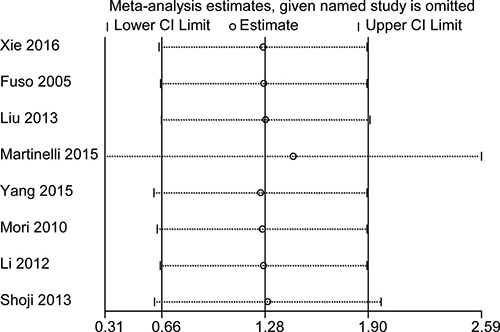 Figure 4: Sensitivity analysis for testing the robust of HR for 1-year OS. The small circle indicates the estimated logHR, given the named study is omitted. Accordingly, the bar corresponds to the lower limit of 95% CI of the logHR.

Forest plot showed that the HR for 3-year OS was significantly correlated with responsiveness, as shown in Figure 5. The pooled HR was 3.34 with 95% CI 2.28–4.90, and no significant heterogeneity was found (P = 0.80, I2 = 0). The random effect model was used in this analysis. A funnel plot was made for visual screening of any potential publication bias (Supplementary Figure 3). No evidence of obvious publication bias was observed by Egger’s test P = 0.59 (Supplementary Figure 4) or Begg’s test P = 1.00 (Supplementary Figure 5). Sensitivity analysis was performed to identify the origin of the heterogeneity. After excluding each study in turn and pooling the results of the remaining studies, no obvious variation of the HR was observed, and no heterogeneity from the included studies was identified. Supplementary Figure 6 illustrates that the logHRs were distributed across a range from 0.72 to 1.73. 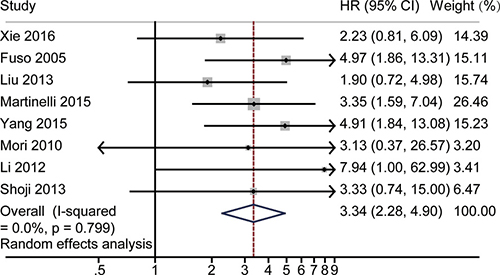 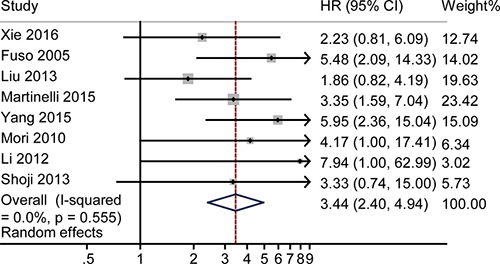 In this study, we made a pooled analysis for the predictive role of NACT treatment response by combining the findings of previously published studies. Our study revealed that OS favored responders with non-responders having a relatively higher risk of mortality. Similar results were observed in 3-year and 5-year OS.

Statistical analysis showed that the present study was properly designed. The studies included in the final analysis were of satisfactory origin, and no heterogeneity was observed when pooling the data. Good balance was also observed across the studies, and no obvious bias was detected while pooling the HR. By combing the previously reported results, both the total analysis and subgroup analysis for 3-year and 5-year revealed a moderate pooling result. Sensitivity analysis showed that the result was robust, as no heterogeneity from the included studies was observed across our research.

Our result validates previous findings reported by other scholars. Li and colleagues reported a similar result: response is a significant prognostic factor for disease-free survival [15]. Xiong and colleagues also reported response to NACT was the only factor associated with survival [16]. Cai and colleagues, who performed a prospective randomized study in Central China, found that survival time of responders was significantly higher than that of non-responders (P = 0.0049) [11]. Professor Wu and colleagues also conducted a prospective randomized study and demonstrated that NACT response was also an independent prognostic predictor (P = 0.005). Our result was different from some other studies [17, 18], possibly due to sample size.

There are some disadvantages to our study. First, responsiveness by WHO criteria, which were used in many studies [10, 16, 19–21], was not evaluated in our study. Second, the role of post-surgery chemotherapy was not evaluated in the present study. In a future study, we will evaluate the prognostic role of clinical response on survival using WHO criteria. Meanwhile, whether clinical response is able to suggest the use of post-chemotherapy still need to be precisely demonstrated through large data or meta-analysis.

In our systematic review and meta-analysis, we found that early response has a significant effect on survival, and it is a significant predictor of the OS rate using RECIST criteria. This finding may be useful in predicting the prognosis of cervical cancer patients and may provide some clues for their treatment.

A literature search was first performed in December 2015 and then updated on July 1st, 2016. Medline, Pubmed, and EMBASE were searched, according to the methods introduced by the previous studies [26]. The key words were used in term of “Neoadjuvant chemotherapy” or “NACT” or “preoperative chemotherapy”, plus “response” or “responding” or “responsiveness” or “responder” or “remission”, plus “uterine cervical cancer” or “uterine cervical carcinoma” or “uterine cervical neoplasms”. The relevant references in the retrieved articles were reviewed and hand-checked to include as many eligible articles as possible.

Inclusion criteria: Original research articles published in a peer-reviewed journal. English was used throughout the article. Patients with definitely diagnosed cervical cancer. RECIST was used in the evaluation of clinical response. The titles, abstracts, and the articles were screened by two authors, independently to determine the eligibility.

Data extraction was independently carried out by two reviewers. The following information were extracted from the included studies: (1) the name of the first author, (2) the publication year, (3) countries and origin of the study, (4) number of cases, (5) number of controls, (6) the period of follow-up, (7) HR and 95% confidence interval (95% CI) in Cox analysis, and (8) survival curve using Kaplan-Meier method. Discrepancies were resolved by discussing with a third author or consulting with the senior investigators.

Quality assessment of the included studies was carried out by using the Newcastle-Ottawa Scale (NOS), as used in the previous studies [35, 36]. The NOS is a nine-point scale that integrates the selection process of the study (≤ 4 points), the comparability of the studies (≤ 2 points), and the identification of the exposure and the outcome of the study participants (≤ 3 points). Two reviewers independently performed quality assessment as well as the risk of bias. Selection bias, statistical rationality, measurement error, and representativeness for the included studies were also studied. Disagreements were resolved by a third reviewer or consulting with the senior investigators.

The HR was used as the common measure of association across the studies. Meanwhile, forest plots were employed to visually illustrate the HR and corresponding 95% CI across the studies. Cochrane Q statistic was used to test the heterogeneity across the studies, and the significance level was set at P < 0.10 [26]. Meanwhile, I2 statistic was employed to test the heterogeneity across the studies, and it was considered to be significant if I2 > 50% [35]. The pooled HR was first calculated by using random effect model based on the DerSimonian and Laird method [37]. To inspect the differences between the random effect model and the fixed-effect model, we further calculated the pooled HR by using the fixed-effect model based on the Mantel-Haenszel method [38]. The possibility of publication bias was assessed by visually screening a funnel plot. Begg’s test and Egger’s test were also used to assess the publication bias [39–41]. Sensitivity analysis was carried out to assess the robustness of the study [26], and one study was omitted from each analysis to test the robustness of the combined results. Stata version 11 (StataCorp, College Station, TX, USA) was used for the statistical analysis. Difference with two-sided P < 0.05 was considered to be statistically significant.

When data including HR and 95% CI could not be obtained directly from the articles, Engauge Digitizer 4.1 were used to read the survival curve of the included studies [42], based on the calculus theory and integral theory [43, 44]. Engauge Digitizer was provided as a free software by previous scholars, and can be freely downloaded from http://digitizer.sourceforge.net, with instructions for readers [45].

Subgroup analysis was also performed based on the follow-up period; in this research, we calculated the pooled HR of 3-year survival as well as pooled HR of 5-year survival. The above software were also employed during the subgroup statistical analysis.

We thank scholars in Wuhan University and Huazhong University of Science and Technology for their kind support and encouragement.

36. Stang A. Critical evaluation of the Newcastle-Ottawa scale for the assessment of the quality of nonrandomized studies in meta-analyses. Eur J Epidemiol. 2010; 25:603–605.