The diagnostic and prognostic value of CHFR hypermethylation in colorectal cancer, a meta-analysis and literature review

Colorectal cancer (CRC) is the third most frequently diagnosed malignancy among males and females, and the third leading cause of cancer-related mortality in the United States [1, 2]. CRC is largely asymptomatic until alarm features develop to advanced stages [3]. Traditional CRC staging takes into account the depth of invasive growth, the histological differentiation grade, and the presence of metastasis in lymph nodes as well as in distant organs. This staging system assesses the anatomic tumor extent only, does not consider the various patients, tumor and environmental factors that influence prognosis. Thus, it is crucial to identify molecular biomarkers for prediction of prognosis and development of new drug target. Checkpoint with Forkhead-associated and Ring finger domains (CHFR) is a G2/M checkpoint gene that has lately been reported by Scolnik et al. [4]. This protein functions as an ubiquitin ligase that consists of a forkhead and a RING finger domain [5]. CHFR mediates delay in M-phase entry, when cells are challenged with an inhibitor of microtubule assembly. CHFR is a ligase that ubiquinates and inhibits Polo-like kinase 1 (Plk 1 kinase), leading to delay in activation of cdc2 kinase, the key regulator of G2/M phase entry [6]. CHFR promoter hypermethylation was observed in various human cancers including 20% in Non-Small Cell Lung Cancer (NSCLC) [7], 30% in esophageal cancers [8], and 40% in CRC [9]. However, the role of CHFR methylation in the progression and prognosis of CRC remains unclear due to the small size sample of individual studies. The aim of present study is to investigate the diagnostic and prognostic value of CHFR methylation in the tumorigenesis and progression of CRC with a meta-analysis which increases the sample size and thus the power.

A total of 132 references were identified in PubMed, EMBASE, and Web of Science databases. Most of them were excluded after reviewing the abstracts. Seven articles were included in the review (Figure 1). 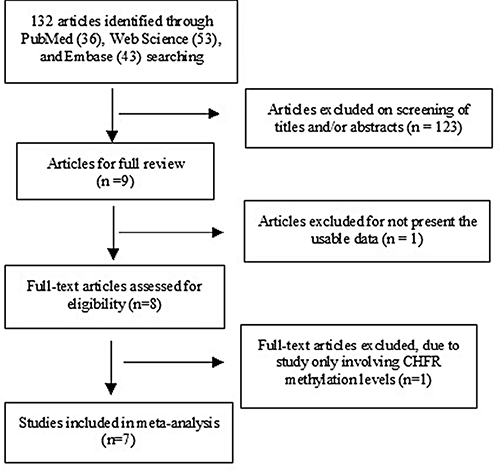 Seven articles were published from 2005 to 2014. A total of 966 CRC patients from the United States, the United Kingdom, Finland, Japan and the Netherlands were included. Their basic characteristics are presented in Table 1.

The quality of individual study was evaluated by using the Newcastle Ottawa Quality Assessment Scale (NOQAS). The score of six studies were greater than or equal to seven that indicated relatively high quality (data not shown), one of them scored six points. A sensitivity analysis was performed by omitting one study from the meta-analysis at a time, the overall results stayed stable (Supplementary Figures 1 and 2). The largely symmetric funnel charts indicated no publication biases in the meta-analysis (Figure 6A–6D).

The association of CHFR promoter hypermethylation with clinicopathological characteritics

Figure 5: Forest plot for the correlation between CHFR promoter hypermethylation and the overall survival of patients with CRC. 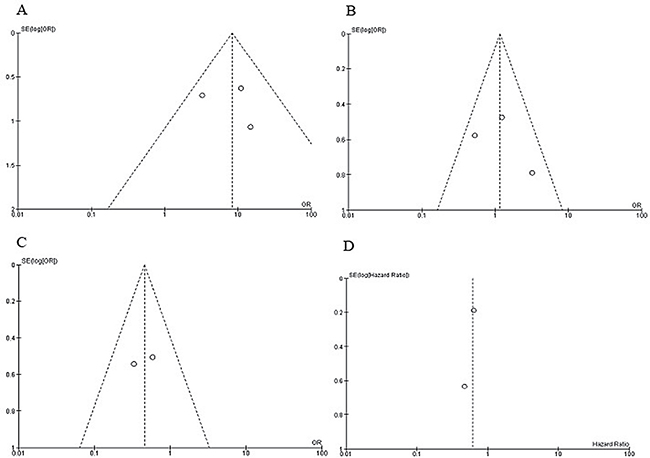 CHFR is a mitotic checkpoint and tumor suppressor gene, which is silenced in a variety of human cancers, mostly by promoter CpG island methylation [17]. Scolnick and Halazonetis first described the inactivation of CHFR in neuroblastoma and colorectal cancer cell lines [4]. In contrast to wild-type cancer cells, CHFR methylation led to an increased mitotic index in these cell lines treated with inhibitor of microtubule assembly. Whereas the mitotic index was decreased by re-expression of CHFR in the cell lines after demethylation with 5-aza-2′-deoxycytidine l [18]. In addition, the potential role of hypomethylation agents, such as azacitidine (AZA), has been demonstrated in reversing the effects of hypermethylation in solid tumors [16]. Therefore, CHFR demethylation is a promising personalized therapy, further validation is required in CRC patients with CHFR hypermethylation.

Previous data indicated that CHFR localizes to the mitotic spindle through an interaction with beta-tubulin and Translationally Controlled Tumor-associated Protein (TCTP), a protein related to microtubule stabilization [19]. Interruption of the spindle results in CHFR to release from TCTP and the mitotic spindle, which will activate the signaling pathways and finally delay cell cycle progression [20]. Oh et al. reported that, in vitro, CHFR binds and represses histone deacetylase 1 (HDAC1) leading to upregulating cycline-dependent kinase inhibitor 1 and the metastasis suppressors, KAI1 as well as Cadherin-1 [21].

Sensitivity analysis indicated that there was not an individual study was found to be significantly biasing the pooled result. There was no evidence of publication bias found. The meta-analysis has potential limitations: 1). Present findings were based on individual unadjusted ORs, while further evaluation needs to be finished by other potential risk factors. 2). All the included studies are observational studies that selection bias and publication bias may exist, since positive results may be more likely to be published than negative results. 3). The searching strategy was limited to articles published in English and Chinese, while studies published in other language were excluded in present study. 4). A small number of patients were evolved in some of included studies so that the confidence intervals within studies was large, this makes it difficult to estimate the real effect. 5). Finally, further studies with large numbers of subjects are essential to validate the results we obtained.

A systematic and comprehensive literature searches was performed for related studies published before March 2017 in the PubMed, EMBASE, Web of Science with no limit set for date and language of publication using the search terms: “colorectal carcinoma”, “CRC”, “methylation”, and “CHFR, or Checkpoint with Forkhead-associated and Ring finger domains”. There were 36 studies were identified from PubMed, 43 studies from EMBASE, 53 studies from Web Science. A total of 132 studies were reviewed by article titles and abstracts.

After reviewing by titles and abstracts, individual studies were screened using the inclusion and exclusion criteria. The inclusion criteria are as following: 1) studies that evaluated CHFR hypermethylation in the primary CRC tissues, 2) studies revealed the relationship between CHFR hypermethylation and CRC clinicopathological features, 3) CHFR hypermethylation examined by polymerase chain reaction (PCR). The exclusion criteria included the following: 1) case reports, conference abstracts, reviews, letters, editorials, expert opinion, 2) all studies using cell lines, human xenografts, and studies in vitro/ex vivo were also excluded. The search process was conducted independently by two reviewers (ZS and JL), discrepancies were discussed and resolved by the third reviewer (HJ). Forward and backward citation chasing of each included article was conducted. The most complete study was chosen to avoid duplication if same patient populations were reported in several publications. Seven articles were eligible for inclusion in this meta-analysis.

Two authors (JL and SD) independently reviewed and extracted following data: last name of the first author, year of publication, country where the study was conducted, number of CRC cases, clinicopathological parameters, cancer TNM (tumor node metastasis) stage, methylation detection method, methylation rate. The detailed information of seven relevant articles was listed in Table 1. Heterogeneity of investigation was evaluated to determine whether or not the data of various studies could be analyzed for a meta-analysis.

For the methodological evaluation of the studies, three investigators (HJ, SD, and JW) read through each publication independently, and they assessed and scored them according to the REMARK guidelines and ELCWP quality scale. Three reviewers provided the quality scores and compared them, and then they reached a consensus value for each item.

The quality of each study was independently scored by three reviewers according the Newcastle Ottawa Quality Assessment Scale (NOQAS). These scales were utilized to allocate a maximum of nine points for the quality of selection, comparability, exposure, and outcomes for study participants, and a score ≥ 7 was considered as a good quality.

Analysis was conducted using Review Manager 5.2 (Cochrane Collaboration, Oxford, UK). The pooled odds ratios (ORs) with its 95% confidence intervals were calculated. Heterogeneity among studies was estimated using the Cochran’s Q statistic and I2 tests [10]. The I2 statistics was used to examine the difference for between study variability due to heterogeneity rather than chance, with a range from 0 to 100 percent. When heterogeneity (I2) was less than < 50%, a fixed effect model was used to calculate parameters. If there was substantial heterogeneity (I2 values ≥ 50%), a random-effect model was used to pool data and attempt to identify potential sources of heterogeneity based on subgroup analyses. The analysis was performed to compare the frequency of CHFR methylation between CRC and normal colorectal tissue. The frequency of CHFR hypermethylation was compared in different tumor characteristics. The pooled ORs were estimated for the correlation between CHFR hypermethylation and clinicopathological features. P values tailed less than 0.05 were considered statistically significant. Publication bias is what occurs whenever the research in the published literature is systematically unrepresentative of population of completed studies. Funnel plots were used for detection of publication bias.

ZS, JL and HJ contributed substantially to the study and design, collection of data, and analysis of data. JL, HJ and SD contributed substantially to the acquisition, analysis, interpretation of data and performed the statistical analysis. HJ and SD have been involved in the drafting and revision of the article. JW has full access to all data and the final responsibility for the decision to submit the article for publication. All authors read and approved the final manuscript.