c-Met, CREB1 and EGFR are involved in miR-493-5p inhibition of EMT via AKT/GSK-3β/Snail signaling in prostate cancer

*These authors have contribute equally to this work

Prostate cancer is accepted as the most commonly diagnosed cancer among men worldwide, and ranks as the second cause of cancer-specific death in the United States [1]. Therefore, it is important to understand its carcinogenic mechanisms of prostate cancer and develop novel therapeutic targets.

MicroRNAs (miRNAs) are known as small non-coding RNAs (20~23 nucleotides) that comprise a new class of target gene mediators, acting by accelerating the degradation and/or blocking the translation of their target mRNAs [2, 3]. In our previous studies, we identified a series of miRNAs involved in prostate cancer proliferation, migration and invasion, including miR-449a, miR-195-5p, and miR-330 [4-6]. However, the biological function of miRNAs in prostate cancer is still unclear.

Based on the studies about expression profiles of miRNA in prostate cancer, we focused on the expression pattern and function of miR-493-5p. miR-493-5p locates at 14q32.2, which is an important miRNA in DLK1-DIO3 region. Previous studies indicated that miR-493-5p was relevant to the carcinogenesis and progression of many types of cancers, including colon cancer, gastric cancer, and bladder cancer [7]. Nevertheless, the function of miR-493-5p in prostate cancer has not been well elucidated.

Here, we explored the function of miR-493-5p in suppression of prostate cancer proliferation and migration. Furthermore, we identified c-Met, CREB1, EGFR and miR-493-5p establish a regulatory loop in prostate cancer.

miR-493-5p is downregulated in prostate cancer 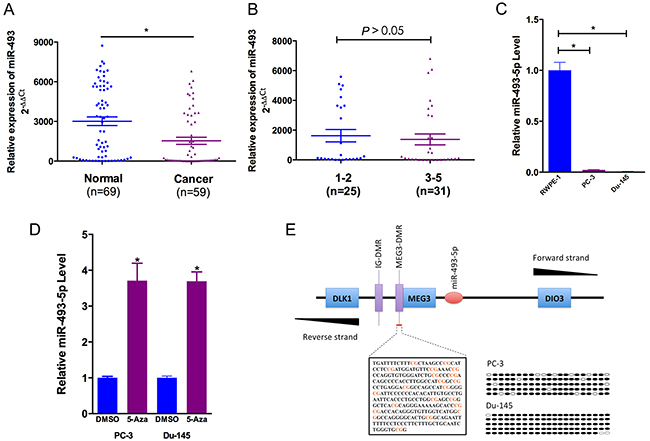 DNA methylation played an important role in microRNA regulation expression [9]. 5-aza-2′-deoxycytidine (short for 5-Aza), a DNA methyltransferase inhibitor, significantly increased miR-493-5p expression in PC-3 and Du-145 (Figure 1D). The CpG Island Searcher Program (http://www.urogene.org/methprimer) was searched to find CpG islands upstream of the miR-493-5p. The identified CpG island was evaluated by sodium bisulfite sequencing assay, and 84.8% and 97.1% of CpG islands were methylated in PC-3 and Du-145, which were dramatically increasing (Figure 1E). These data further verified the involvement of methylation in miR-493-5p silencing. 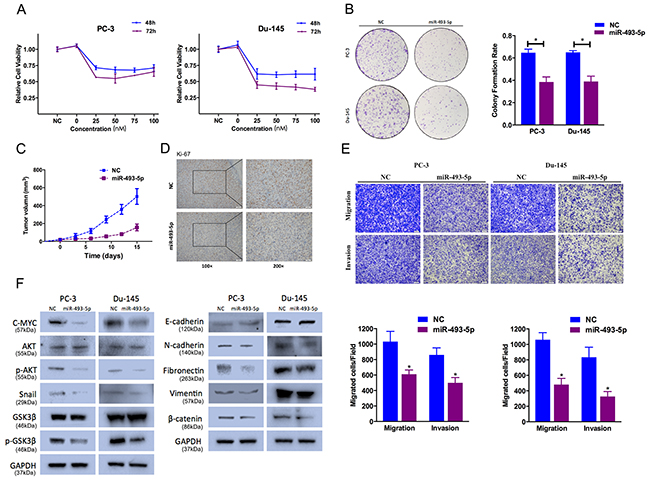 c-Met, EGFR and CREB1 are downstream targets of miR-493-5p

To identify potential downstream targets of miR-493-5p, we used miRanda and TargetScan online databases for analysis. Considering the candidate target genes predicted by the two online databases and the function of miR-493-5p, we chose c-Met, CREB1 and EGFR as candidate targets. Previous studies have shown that c-Met, CREB1 and EGFR are key cell motility and proliferation regulators, respectively [9]. We examined decreased expression of CREB1 and EGFR in miR-493-5p-treated prostate cancer cells at both mRNA and protein level (Figure 3A, 3B). Besides, decreased expression of c-Met was found at protein level, not mRNA level, which indicated miR-493-5p inhibited the translation of c-Met, not degradated the mRNA of c-Met (Figure 3A, 3B).

To avoid off-target phenomena, we use three different and effective siRNAs in our studies. The following results were obtained from one of the three siRNAs as a representative. We performed Transewell assays to identify the function of c-Met in prostate cancer cell motility. We found that Si-c-Met significantly suppressed PC-3 cell migration and invasion ability (Figure 4A). 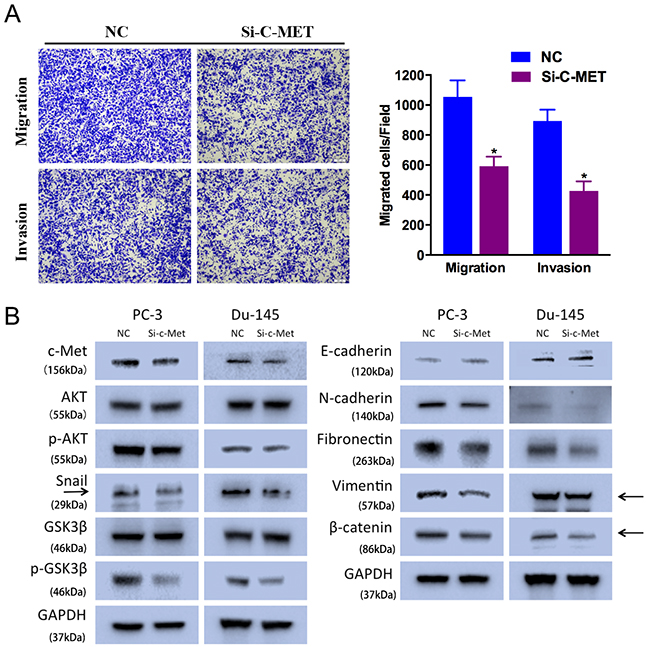 To avoid off-target phenomena, we use three different and effective siRNAs in our studies. The following results were obtained from one of the three siRNAs as a representative. Firstly, CCK-8 assays were performed, and illustrated that CREB1 silencing by Si-CREB1 suppressed PC-3 and Du-145 cell growth at different time points and concentrations (Figure 5A). Secondly, the colony-forming ability was also inhibited in Si-CREB1-transfected group (Figure 5B). We performed Transewell assays to identify the function of CREB1 in prostate cancer cell motility. We found that Si-CREB1 significantly suppressed PC-3 cell migration and invasion ability (Figure 5C). 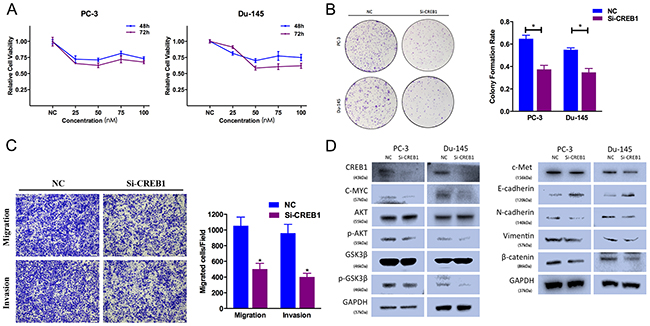 To avoid off-target phenomena, we use three different and effective siRNAs in our studies. The following results were obtained from one of the three siRNAs as a representative. Firstly, CCK-8 assays were performed, and illustrated that EGFR silencing by Si-EGFR suppressed PC-3 and Du-145 cell growth at different time points and concentrations (Figure 6A). Secondly, the colony-forming ability was also inhibited in Si-EGFR-transfected group (Figure 6B). We performed Transewell assays to identify the function of EGFR in prostate cancer cell motility. We found that Si-EGFR significantly suppressed PC-3 cell migration and invasion ability (Figure 6C). 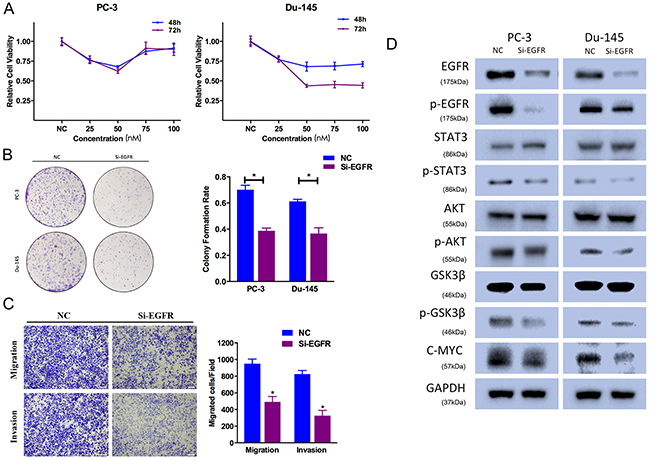 Figure 7 illustrates the critical outcomes of this study. 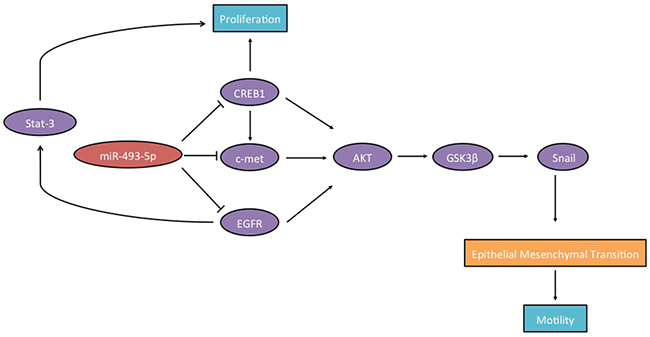 The DLK1-DIO3 region includes the paternally expressed DLK1 and DIO3, as well as the maternally expressed MEG3 and MEG8 [12-14]. Epigenetic changes regulate the DLK1-DIO3 imprinted miRNA cluster. This region contains 53 miRNAs on the forward strand and 1 miRNA on the reverse strand [7]. Previous studies indicated that DLK1-DIO3 miRNA cluster had crucial roles in carcinogenesis. miR-495, miR-409-3p, miR-379 have been found to be related to the pathogenesis and progression of gastric cancer [15]. miR-493 was deregulated in esophageal squamous cell carcinoma [16]. miR-323 was observed to be downregulated in colorectal cancer, and could possibly be a promising biomarker for early diagnosis [17]. miR-433 also locates in the DLK1-MEG3 region, and the CpG islands of miR-433 were hypermethylated. DNA methylation inhibitor, 5-aza-CdR, could increase miR-433 level [9]. In our study, epigenetic programming was involved in decreasing the expression of miR-493-5p in prostate cancer.

c-Met is a well-known receptor tyrosine kinase (RTK), and is frequently overexpressed many human cancers. Recent researches have illustrated that suppression of c-Met could inhibit cancer cell proliferation and invasion, which is a promising method in cancer therapy [18]. In our previous studies, we have confirmed that mir-101, miR-409-3p and miR-433 inhibit bladder cancer cell motility by downregulating c-Met [9, 19, 20]. In our study, miR-493-5p downregulation resulted in the abnormal activation of c-Met in prostate cancer. Furthermore, inhibition of c-Met by miR-493-5p downregulated the activating level of phosphorylated AKT and phosphorylated GSK-3β, resulting in the nuclear localization of Snail, higher level of E-cadherin, and lower level of Vimentin and N-cadherin.

EGFR family members played important roles in many types of cancers, which resulted in targeted therapies development, including synthesis of small-molecule inhibitors. Nevertheless, activation of the EGFR drove cancer progression via complex mechanisms, which were not well understood [22]. A previous study demonstrated that EGFR promoted prostate tumor-initiating cells and circulating tumor cells survival, and EGFR inhibitor led to suppression of tumor xenograft growth [23].

IHC staining was performed as previously described [24]. Tumor tissues from mice were analyzed. The strength of positivity was semi-quantified by considering the intensity and the proportion of positive cells.

Prostate cancer cells (4000 cells/well) were seeded into 96-well plates. After a 24 h incubation, the cells were treated with miR-493-5p, Si-c-Met, Si-CREB1, or Si-EGFR for 48 h or 72 h incubation. Cell viability assays were performed as previously described [25].

PC-3 and Du-145 prostate cancer cells were seeded into a new six-well plate and incubated for 24 h before treatment with 2′-O-Methyl-modified miR-493-5p, Si-c-Met, Si-CREB1, or Si-EGFR. Detailed experimental procedures were performed as previously described [25].

Genomic DNA from PC-3 and Du-145 prostate cancer cell lines was bisulfite modified, and the CpG islands were amplified by PCR (Primers sequences are listed in Supplementary Table 1). The PCR products were separated by agarose gel electrophoresis (3%), extracted and cloned into the pUC18 T-vector (Sangon, China). After bacterial amplification of the cloned PCR fragments by standard procedures, 5 clones were sent for DNA sequencing (Sangon, China).

Animal experiments were conducted in accordance with institutional guidelines (1st Affiliated Hospital, College of Medicine, Zhejiang University). Male BALB/c-nude mice (4 weeks old) were purchased from the Shanghai Experimental Animal Center, Chinese Academy of Sciences (Shanghai, China). Lipofectamine 2000-encapsulated miR-493-5p or NC was used for injection. PC-3 cells (1 × 108 in 100 μl PBS) were injected subcutaneously into the right flank of each mouse. When palpable tumors arose, the mice were injected intratumorally with 30μl of Lipofectamine 2000-encapsulated miR-493-5p or NC every 3 days for 15 days. Tumor size was monitored and evaluated every 3 days. Tumor growth was monitored by caliper measurements of the two perpendicular diameters every 3 days, and the volume of the tumor was calculated with the formula V = (width2 × length × 0.52).

Prostate cancer blood samples and benign prostate hyperplasia blood samples were obtained from patients diagnosed pathologically. The samples were collected between January 2016 and October 2016 at the First Affiliated Hospital of Zhejiang University, after informed consent of patients and approval of Ethics Committee of 1st Affiliated Hospital, College of Medicine, Zhejiang University (No. 201644).