MicroRNA-146a-5p (miR-146a) functions as a tumor suppressor or oncogene involved in multiple biological processes. But, the underlying molecular mechanisms by which miR-146a contributes to osteosarcoma (OS) remain unclear. The correlation of miR-146a expression with clinicopathologic characteristics and prognosis of OS patients was analyzed by Kaplan-Meier and Cox regression analysis. Cell growth in vitro and in vivo was assessed by MTT, cell colony formation and animal models. The target of miR-146a was identified by bioinformatics software and gene luciferase reporter. As a result, miR-146a expression was substantially elevated in OS tissues and was positively associated with the tumor size (P=0.001) and recurrence (P=0.027) of OS patients. Moreover, knockdown of miR-146a suppressed cell proliferation and colony formation in vitro and in vivo. In addition, zinc and ring finger 3 (ZNRF3) was identified as a direct target of miR-146a in OS cells, and was negatively correlated with miR-146a expression in OS tissues. Overexpression of ZNRF3 inhibited cell growth and rescued the tumor-promoting role of miR-146a via inhibition of GSK-3β/β-catenin signaling pathway. Taken together, miR-146a may function as an oncogene in OS cells by targeting ZNRF3/GSK-3β/β-catenin signaling pathway, and represent a promising biomarker for OS patients.

Osteosarcoma (OS) is considered to be an aggressive bone neoplasm and occurs mainly in children and young adults [1]. Although the great progress has been made in surgical treatment combined with multidrug chemotherapy, the five-year survival rate and recurrence risk of OS patients have not been significantly improved due to the tumor local relapse and metastases [2]. Many molecular alterations in critical signal transduction pathways contribute to the OS pathogenesis via promoting the proliferation and metastasis [3]. Herein, identifying the key molecular targets involved in OS progression will be highlighted for diagnosis and therapy of OS patients.

MicroRNAs (miRNAs) as noncoding RNAs have participated in multiple biological and pathogenesis of diseases by regulating gene expression. Dysregulation of miRNAs as oncogenes or tumor suppressors is involved in multiple steps of the oncogenic process [4]. On the one hand, miR-146a expression is found upregulated in gastric cancer [5], breast cancer [6], premalignant thymocytes [7] and thyroid cancer [8], and the rs2910164 polymorphism in miR-146a is related with the incidence of melanoma [9]. Ectopic expression of miR-146a results in cell proliferation [8, 10], migration [10], invasion and metastasis [11] in some cancers. Moreover, some key pathways mediate miR-146a promoting tumor progression. miR-146a facilitates growth and development of melanoma by activation of Notch signaling [12], reduces cell apoptosis in acute promyelocytic leukemia by Smad4 signaling [13] and enhances tumorigenic potential of breast cancer [14]. These data indicate that miR-146 may function as an oncogene involved in tumor progression.

Despite the bi-directional role of miR-146a in cancers, its function and underlying regulation mechanism remain unclear in OS. In the present study, we found that miR-146a expression was increased in OS tissues and was positively correlated with the tumor size and high recurrence rate of OS patients. Knockdown of miR-146a suppressed cell growth in vitro and in vivo. In addition, ZNRF3 was identified as a direct target of miR-146a in OS cells, and had a reverse correlation with miR-146a expression in OS tissues. Overexpression of ZNRF3 inhibited cell growth and attenuated the tumor-promoting effects of miR-146a via inhibition of GSK-3β/β-catenin signaling, indicating that miR-146a may function as a tumor suppressor and represent a potential biomarker for OS patients. 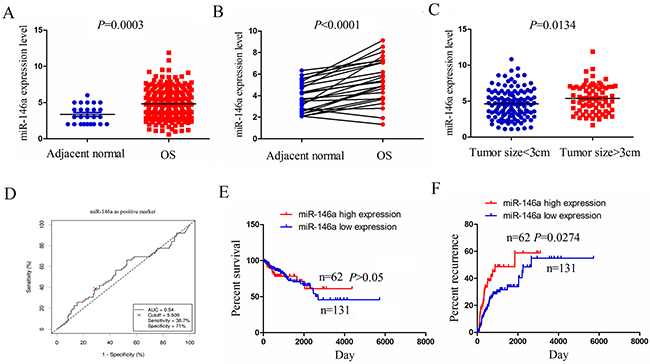 Table 1: The correlation of miR-146a expression with clinicopathological factors of OS patients

The effects of miR-146a on OS cell growth 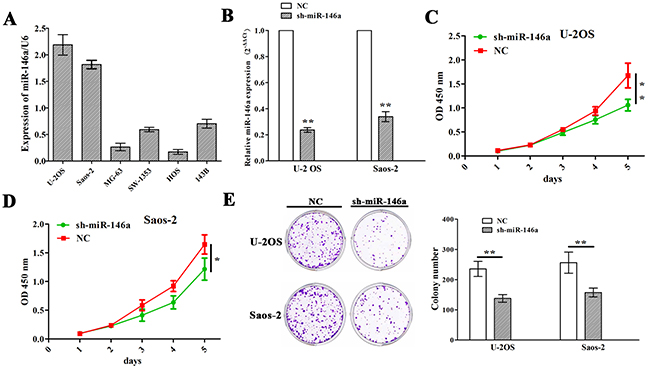 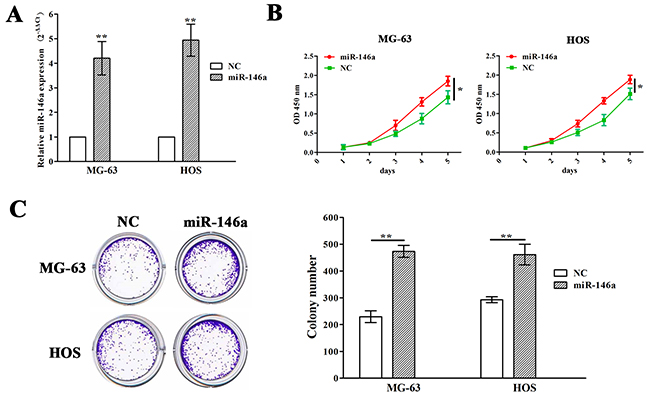 ZNRF3 was a target gene of miR-146a in OS cells

To confirm the molecular mechanism by which miR-146a regulates cell growth in OS cells, we identified the potential target genes of miR-146a by using prediction websites (http://starbase.sysu.edu.cn/targetSite.phpfor). As shown in Figure 4A, under the stringent conditions including very high stringency (≥5), cancer types (≥5) and prediction software (≥3), six target genes were identified to have the potential to bind with miR-146a, of which zinc and ring finger 3 (ZNRF3) was considered as the most suitable candidate target gene of the miR-146a due to its highest binding force (Supplementary Table 3). To further verify whether miR-146a directly binds to the 3’ UTR of ZNRF3, the wild type 3’ UTR or the mutant 3’ UTR target sequences of ZNRF3 (Figure 4B) were cloned into the luciferase reporter vector in MG-63 and HOS cells. It was demonstrated that miR-146a decreased the expression levels of ZNRF3 in OS cells (Figure 4C). Moreover, miR-146a overexpression lowered the luciferase activity of wild type 3` UTR of ZNRF3 in OS cells, but had no effect on that of mutation 3` UTR of ZNRF3 (Figure 4D). 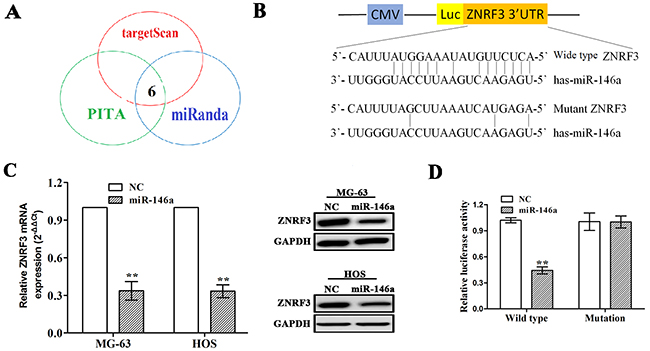 Figure 4: ZNRF3 gene was identified as a direct target of miR-146a. (A) 6 target genes of miR-146a were identified by miRNA forecasting software. (B) Diagrams demonstrated the miR-146a putative binding sites and corresponding mutant sites of ZNRF3. (C) The expression levels of ZNRF3 were examined after transfection with miR-146a by qRT-PCR and Western blotting assays in MG-63 and HOS cells. (D) Luciferase activity of ZNRF3 (wild type or mutation) was evaluated after miR-146a transfection into MG-63 and HOS cells. **P<0.01. 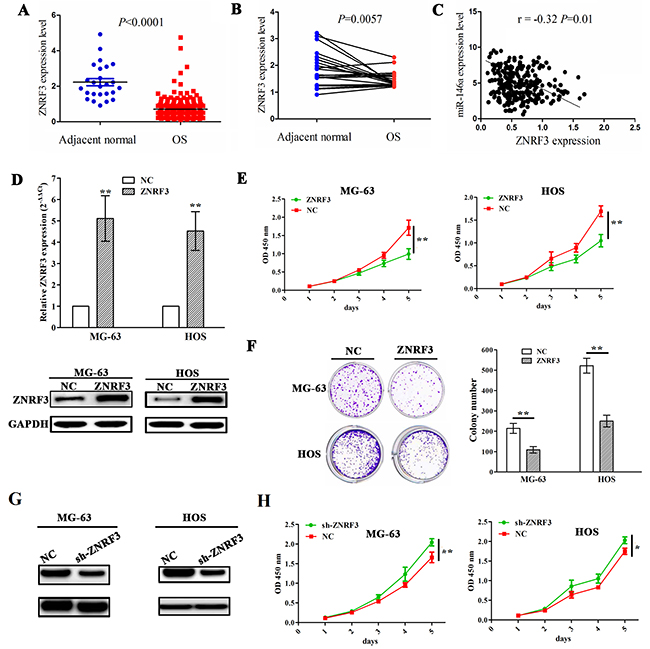 To uncover the molecular mechanism by which ZNRF3 rescues the proliferation-promoting effects induced by miR-146a, we co-transfected ZNRF3 and miR-146a overexpression vectors into MG-63 and HOS cells, indicating that ZNRF3 overexpression reduced miR-146a-induced cell proliferation (Figure 6A). Moreover, the expression levels of GSK-3β and β-catenin as potential downstream factors of ZNRF3 were detected by Western blot, indicating that miR-146a increased the activity of GSK-3β/β-catenin pathway, but this effect was reversed by ZNRF3 in OS cells (Figure 6B). Then, we co-transfected sh-ZNRF3 and miR-146a knockdown vectors into OS U2-OS and Saos-2 cells, and found that knockdown of ZNRF3 attenuated the effects of sh-miR-146a induced increased expression of ZNRF3 (Figure 6C and 6D) and decreased proliferation of OS cells (Figure 6E).

Having confirmed the proliferation-promoting role of miR-146a in OS cells in vitro, we further verified the effects of miR-146a on OS cell growth in vivo. A subcutaneous U-2OS tumor model was esbablished to assess the growth activity of xenograft tumors affected by miR-146a. During the 3 weeks’ investigation, the tumor length and width of the xenograft tumors was examined every other day. We found that the proliferation rates of tumors were significantly decreased by sh-miR-146a (Figure 7A and 7B). The average weight and volumes in sh-miR-146a group were lowered compared with those in NC group (Figure 7C and 7D). Further, western blotting analysis showed that knockdown of miR-146a downregulated the expression of ZNRF3 in xenograft tumor tissues (Figure 7E).

Accumulating evidence shows that miR-146a is implicated in cell growth and metastasis in various cancers, of which the dysregulation of miR-146a is associated with pathological staging, poor differentiation and distant metastasis, acting as an independent prognostic element for overall survival in gastric cancer [25, 26] and lung cancer [27]. In addition, miR-146a polymorphism rs2910164 is linked to the risk of esophageal cancer and colorectal cancers [28, 29]. In this study, we analyzed the correlation of miR-146a with clinicopathologic characteristics and prognosis of OS patients, which indicated that increased expression of miR-146a was positively linked to tumor size and OS recurrence, but Kaplan-Meier analysis indicated that miR-146a was not an independent prognostic factor for overall survival and recurrence for OS patients, unveiling that miR-146a might be a potential biomarker for OS patients.

Functionally, in terms of the diversity of tissue expressions and the difference in target gene function, imiR-146a can act as an oncogene [12-14] or a tumor suppressor [21-24] in a variety of malignancies. miR-146a inhibits cell invasion in pancreatic cancer via inhibition of EGFR and NF-kB pathways [30], weakens the metastatic potential in breast cancer [31] and reduces epithelial-mesenchymal transition of esophageal carcinoma [32]. But, the function of miR-146a in human OS tissues is elusive. To confirm its role in human OS, our results showed that knockdown of miR-146a inhibited growth and colony formation in vitro and in vivo, revealing the tumor-promoting role of miR-146a in OS cells.

ZNRF3 as a member of E3 ubiquitin ligases family is downregulated in gastric cancer [33] and papillary thyroid carcinoma [34] and colorectal cancer [35], and inhibits cell growth and invasion and induces apoptosis via regulation of the Wnt/β-catenin pathway [33, 36]. MiR-93 promotes growth of lung cancer cells via ZNRF3/Wnt/β-catenin axis [37], and ZNRF3 suppresses the tumorigenesis and metastasis of nasopharyngeal carcinoma cells by inhibition of Wnt/β-catenin signaling [38]. Intriguingly, we also found that ZNRF3 was a direct target of miR-146a in OS cells and was negatively correlated with miR-146a expression in OS tissues; Overexpression of ZNRF3 repressed cell growth and rescued the tumor-promoting role of miR-146a via inhibition of GSK-3β/β-catenin signaling, indicating that miR-146a might promote OS tumorigenicity via targeting ZNRF3/GSK-3β/β-catenin signaling (Figure 8). 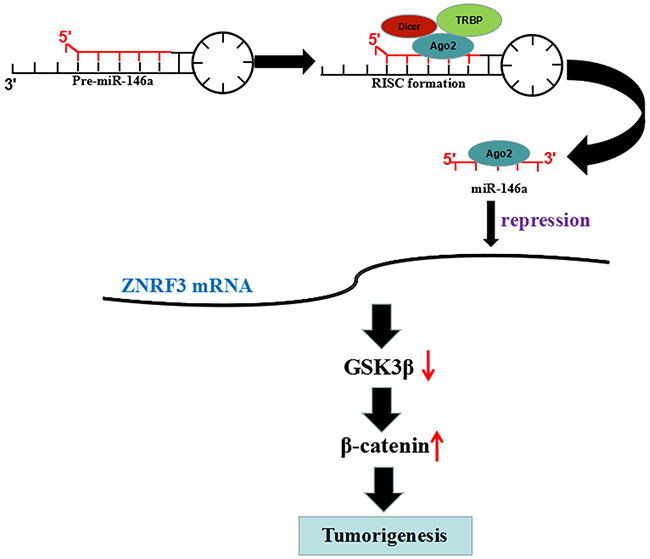 Figure 8: miR-146a promoted OS tumorigenicity via regulation of ZNRF3/GSK-3β/β-catenin signaling pathway. miR-146 reduced the transcriptional level of ZNFR3 gene by binding to its 3’ UTR, upregulated the expression of p-GSK-3β and β-catenin, but downregulated GSK-3β expression, thereby leading to the tumorigenesis of OS.

Taken together, our study demonstrates that miR-146a is highly expressed in OS tissues and has the positive correlation with tumor size and high recurrence of OS patients. Restoration of miR-146a expression promotes OS cell growth via targeting ZNRF3/GSK-3β/β-catenin pathway, and represents a promising biomarker for OS patients.

Cell resuscitation and frozen are manipulated according to the standard process. OS cells were cultured with DMEM medium added with 10% FBS and 1% penicillin (100U/ml) and streptomycin (100μg/ml) in a humidified atmosphere containing 5% CO2 at 37°C. Lentivirus-mediated miR-146a or miR-146 shRNA vector construction and cell transfection were referred as previously described [39]. The transfection efficiency of miR-146 or miR-146a shRNA were determined by qPCR.

Total RNA exaction, reverse transcription and cDNA amplification were manipulated depending on the protocols provided by the manufacturers, of which miR-146a exaction was based on the protocols provided by miRNeasy mini kit. The primers of miR-146a, U6, ZNRF3 and GAPDH were listed in Supplementary Table 5. Data were analysed using the comparative Ct method (2-ΔΔCt). Three separate experiments were performed for each clone.

OS cells transfected with miR-146a, miR-146a shRNA and ZNRF3 were incubated in 96-well-plates at a density of 2×103 cells. Cells were pretreated with 10μl of MTT dye each day. After incubation for 4 h, 100μl of DMSO were added into the cells for 15 min. The color reaction was measured at 570 nm using an Enzyme Immunoassay Analyzer (Bio-Rad, Hercules, CA).

OS cells transfected with miR-146a, miR-146a shRNA and ZNRF3 were trypsinized and reseeded into 6-well plate. The number of cell colonies in control and treatment groups were counted after a week and were stained with crystal violet.

Six-week-old female immune-deficient nude mice were fed in Animal Institute of Chinese Academy of Sciences based on the regulations and internal biosafety and bioethics guidelines of Renji Hospital, Shanghai Jiao Tong University. Mice were injected subcutaneously with 1×106 U-2OS cells stably transfected with sh-miR-146a or control cells. The length and width of the Xenograft tumors was measured with a caliper every other day.

SPSS 21.0 was applied for the statistical analysis of the values, which were recorded as the mean ±SEM. Paired or independent t test was used to analyse the differential change in each group. Statistical significance was set at P < 0.05.