Changes in body and heart weights and heart:body weight ratio

On postnatal day 14, the body and heart weights and heart:body weight ratio were comparable between normal rats and rats treated with normal saline (NS) or MSC (Table 1).

Values are expressed as the mean ± standard deviation.

We calculated the right ventricle (RV):left ventricle (LV) thickness ratio as an indicator of right ventricular hypertrophy. The rats exposed to prenatal lipopolysaccharide (LPS) and neonatal hyperoxia and treated with NS had a significantly higher RV:LV thickness ratio than did the normal rats and those exposed to prenatal LPS (Table 1). Human MSC transplantation (3 × 105 and 1 × 106 cells) in the prenatal LPS- and neonatal hyperoxia-treated rats significantly reduced the RV:LV thickness ratio to that reported in the LPS+room air (RA)+NS group. In addition, we estimated arterial remodeling by measuring the medial wall thickness (MWT) of the small pulmonary arteries, because the MWT is a surrogate marker of pulmonary hypertension. The rats exposed to prenatal LPS and reared in either RA or an O2-enriched atmosphere exhibited a significantly higher MWT than did the normal rats. Treatment with human MSCs (3 × 105 and 1 × 106 cells) significantly reduced the prenatal LPS- and neonatal hyperoxia-induced increase in MWT (Figure 1). 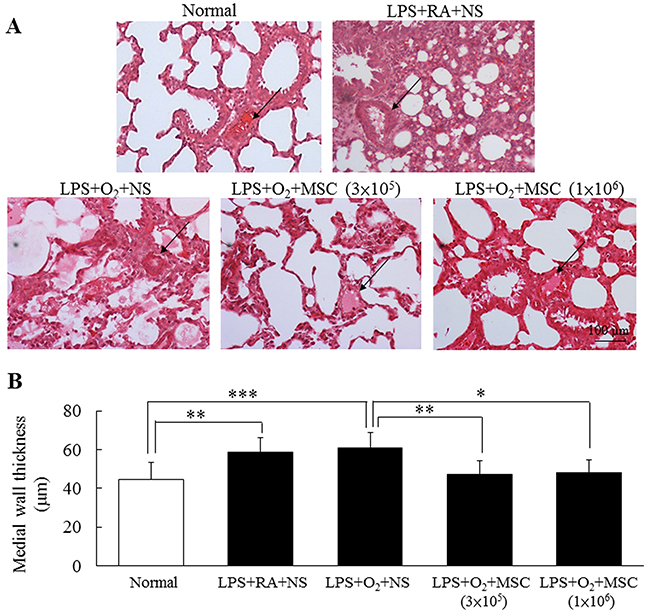 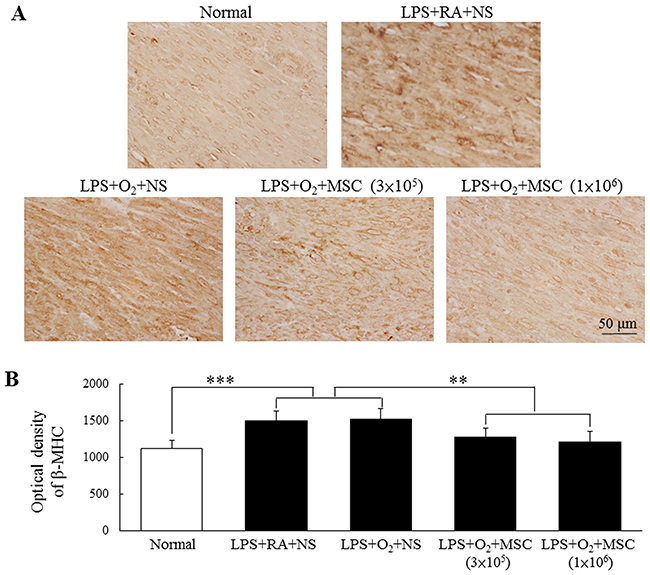 Figure 2: (A) Immunohistochemistry of β-MHC in heart sections and (B) semiquantitative analysis of β-MHC expression on postnatal day 14. Positive staining is depicted in brown. β-MHC was mainly distributed in the myocardial cell cytoplasm. Prenatal LPS and neonatal hyperoxia treatment increased β-MHC expression in the rats. β-MHC expression was significantly reduced in the human MSC-treated rats compared with the NS-treated rats (**P < 0.01 and ***P < 0.001). 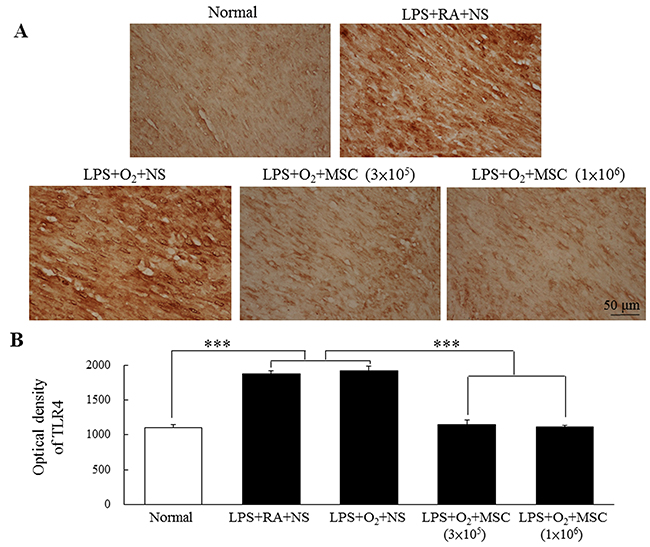 Figure 3: (A) Immunohistochemistry of TLR4 in heart sections and (B) semiquantitative analysis of TLR4 expression on postnatal day 14. Positive staining is shown in brown. TLR4 expression was diffused and predominantly confined to cardiomyocytes. The rats exposed to prenatal LPS and reared in either RA or O2 exhibited increased TLR4 expression. Treatment with human MSCs (3 × 105 and 1 × 106 cells) significantly reduced TLR4 expression in the prenatal LPS- and neonatal hyperoxia-treated rats compared with the normal rats (***P < 0.001).

Figure 4 shows increased β-MHC and TLR4 expression levels in the heart tissues of the rats exposed to prenatal LPS and reared in either RA or O2. Treatment with human MSCs (3 × 105 and 1 × 106 cells) significantly reduced TLR4 expression in the prenatal LPS- and neonatal hyperoxia-treated rats compared with that in the NS-treated rats; the difference was statistically nonsignificant for β-MHC.

Figure 4: Representative Western blots and quantitative data determined using densitometry for β-MHC (A) and TLR4 (B) expression in heart tissues on postnatal day 14. The rats exposed to prenatal LPS and reared in either RA or O2 exhibited increased β-MHC and TLR4 expression. TLR4 expression was significantly reduced in the rats treated with MSCs (3 × 105 and 1 × 106 cells) compared with those treated with NS (*P < 0.05 and **P < 0.01). The difference was statistically nonsignificant for β-MHC. 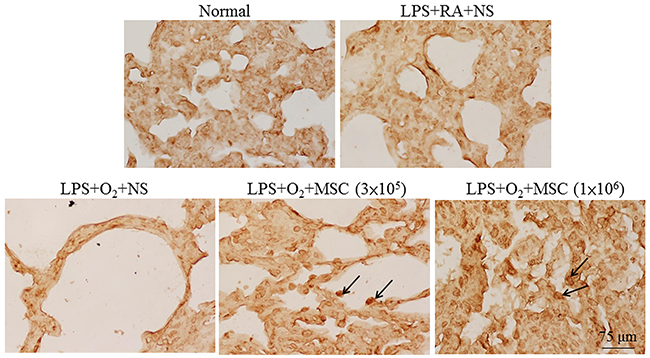 Figure 5: Representative immunohistochemical staining for a human-specific nuclear antigen in lung tissues on postnatal day 14. Positive staining is depicted in brown on the nuclei of MSCs (arrows).

The main findings of this in vivo study are that the prenatal LPS and neonatal hyperoxia intervention increased the pulmonary arterial MWT, RV:LV thickness ratio, and β-MHC and TLR4 expression in rat hearts on postnatal day 14. However, the intratracheal administration of MSCs on postnatal day 5 reduced these parameters. These data suggest that human MSCs ameliorated right ventricular hypertrophy and pulmonary hypertension in the prenatal LPS- and neonatal hyperoxia-treated rats by suppressing TLR4 expression through paracrine effects.

Maternal, genetic, and environmental factors lead to an early injury of the developing lung, which impairs angiogenesis and alveolarization, thus resulting in the simplification of the distal lung airspace and clinical manifestations of BPD. Impairments in the developing pulmonary vasculature may cause severe pulmonary vascular disease; this disease in preterm infants with BPD is characterized by altered lung vascular development, growth, structure, or function, which precedes the onset of measurable pulmonary hypertension [9]. Pulmonary hypertension caused by pulmonary arterial remodeling and the disruption of angiogenic factor expression has been reported in the autopsy data of infants who died because of BPD [15, 16]. Recent animal studies have shown that intervention through either prenatal inflammation or postnatal hyperoxia could cause pulmonary hypertension in newborn rats [17, 18]. However, the treatment for pulmonary hypertension induced by prenatal inflammation and postnatal hyperoxia remains unclear.

LPS, a pathogen-associated molecule, is present in the outer membrane of most gram-negative bacteria. LPS was reported to activate TLR4 and downstream TLR signaling molecule expression in bovine endometrial epithelial cells [23]. TLRs are essential components of the innate immune system that recognize pathogens and initiate inflammatory responses [24]. LPS induced an increase in myocardial tumor necrosis factor (TNF)-α and interleukin-1β mRNA expression, and the response was blunted in TLR4-deficient mice [25]. We previously demonstrated that prenatal LPS injection increased nuclear factor (NF)-κB and TNF-α expression in the hearts of rat pups [18]. NF-κB is a downstream transcription factor in the TLR-mediated signaling pathway. The findings of these studies suggest that TLR4 is crucial in signaling cytokine production in the heart during endotoxic shock and maternal inflammation.

The beneficial effects of MSCs have been suggested to be predominantly influenced by paracrine effects [31, 32]. We observed that intratracheal MSC transplantation reduced right ventricular hypertrophy and pulmonary hypertension in prenatal LPS-treated rats. This paracrine effect of MSCs is analogous to that reported in a previous study, in which the intratracheal transplantation of stem cells attenuated hyperoxia-induced pulmonary hypertension in rats [13]. Additional studies are warranted to evaluate the optimal dose of MSCs in experimental pulmonary hypertension. In conclusion, intratracheal MSC transplantation protected cardiomyocytes from hypertrophy and reduced TLR4 expression, although we did not measure the specific factors. These results suggest that human MSCs protect cardiomyocytes by inhibiting TLR expression through a paracrine pathway.

Our study was approved by the Animal Care and Use Committee of Taipei Medical University. Time-dated pregnant Sprague–Dawley rats were housed in individual cages under a 12-h light–dark cycle, with ad libitum access to food and water. On gestational days 20 and 21, the rats received an intraperitoneal injection of LPS (0.5 mg/kg/day, Escherichia coli serotype 0111:B4; Sigma–Aldrich, St. Louis, MO, USA) dissolved in NS. The rat dams were allowed to deliver vaginally at term. Within 12 h of their birth, the pups were pooled, randomly redistributed to the mothers, and randomly assigned to either RA or O2 treatment. The pups in the O2 treatment subgroups were reared in an atmosphere of 85% O2 from postnatal days 1 to 14. The pups in the RA control subgroups were reared in normal RA for 14 days. The nursing mothers were rotated between the O2 treatment and RA control groups every 24 h to avoid O2 toxicity. An O2-rich atmosphere was maintained in a transparent 40 × 50 × 60-cm plexiglass chamber with a continuous supply of O2 at 4 L/min. O2 levels were monitored using a ProOx P110 monitor (BioSpherix; Redfield, NY, USA).

On postnatal day 5, human MSCs (3 × 105 cells and 1 × 106 cells) in 0.03 mL of NS were transplanted into the trachea of the pups by using a 30-gauge needle syringe. The administration route and MSC dose were based on the studies by van Haaften et al. and Chou et al., who have respectively demonstrated that the intratracheal injection of MSCs (1 × 105, 3 × 105, 1 × 106 cells per animal) attenuates pulmonary hypertension induced by postnatal hyperoxia or prenatal LPS treatment in newborn rats [13, 18]. After the procedure, the pups were allowed to recover from the anesthesia and were returned to their dams. We examined five study groups: normal, LPS+RA+NS, LPS+O2+NS, LPS+O2+MSCs (3 × 105 cells), and LPS+O2+MSCs (1 × 106 cells). The normal group included rats that had received no treatment and were reared in the same environment as prenatal LPS-treated rats. The pups from each study group were strongly anesthetized with an overdose of gaseous isoflurane on postnatal day 14, and their body and heart weights were recorded. Immediately after death, their left lungs were ligated, and the right lungs were fixed by the tracheal instillation of 10% buffered formalin at a pressure of 25 cm H2O for 10 min.

Cardiac tissues were homogenized, sonicated, and centrifuged at 13,000 rpm for 15 min at 4°C to remove cellular debris. Proteins (30 μg) were subjected to 12% sodium dodecyl sulfate polyacrylamide gel electrophoresis under reduced conditions and were electroblotted onto polyvinylidene difluoride membranes (Immobilon-P; Millipore, Bedford, MA, USA). After blocking with 5% nonfat dry milk, the membranes were incubated with TLR4 (SC-293072) and β-MHC (MYH7, SC-53090) antibodies (1:1,000; Santa Cruz Biotechnology, Dallas, TX, USA) or anti-β-actin (SC-47778), and they were subsequently incubated with horseradish peroxidase-conjugated antimouse IgG antibody (Pierce Biotechnology, Rockford, IL, USA). The protein bands were detected using a SuperSignal substrate (Pierce Biotechnology. A densitometric analysis was performed to measure the intensity of TLR4 and MYH7 expression and β-actin bands by using AIDA software. Data were normalized to β-actin for each animal.

The lungs and hearts were removed and placed in a fixative at room temperature; 5-μm-thick lung sections were stained with hematoxylin and eosin for light microscopy analysis. Right ventricular hypertrophy was assessed by measuring the RV:LV thickness ratio. The MWT of vessels with an external diameter of 20–65 μm was measured. The wall thickness and external diameter were measured using Image-Pro Plus 6.0 (Media Cybernetics, Silver Spring, MD, USA). For each rat, 14–26 vessels were measured. The percentage medial thickness of an individual vessel was calculated using the following formula: (medial thickness × 2 × 100)/external diameter [33].

The data are presented as the mean ± standard deviation. Statistical analyses were performed using one-way analysis of variance with a Bonferroni post hoc test for multiple group comparisons. The differences were considered statistically significant at P < 0.05.