Excretory/secretory antigens (ESAs) produced by Toxoplasma gondii enable this parasite to invade and survive within the host cells through immunomodulation. In this study, the modulating effects of T. gondii excretory/secretory antigens (TgESAs) on the Ana-1 murine macrophage cell line were evaluated. Ana-1 cells were incubated with several concentrations of TgESAs, and the resulting effects on cellular viability, phagocytotic ability, and apoptosis induction were determined. Pro-inflammatory and anti-inflammatory cytokine secretion, nitric oxide production, toll-like receptor expression, and nuclear translocation of NF-κB were all measured after incubation with TgESAs. After TgESAs treatment, the proliferation and phagocytosis ability of Ana-1 cells decreased, and apoptosis was induced in a dose dependent manner. Analysis of Ana-1 cell culture supernatants showed that TgESAs not only upregulated secretion of anti-inflammatory cytokines (interleukin-10 and transforming growth factor-β1), they also inhibited secretion of pro-inflammatory cytokines (tumor necrosis factor-α and interleukin-1β). Additionally, TgESAs inhibited nitric oxide production, toll-like receptor (TLR) 2 and 4 activation, and the nuclear translocation of NF-κB in lipopolysaccharide-stimulated Ana-1 macrophages. These results suggest TgESAs inhibit the functional activity of Ana-1 murine macrophages by inhibiting TLR-induced NF-κB activation, which suppresses pro-inﬂammatory cytokine secretion.

Toxoplasmosis is caused by Toxoplasma gondii, which is widespread in humans and animals and is an opportunistic pathogen infecting patients that are immunocompromised [1]. During T. gondii infection, the parasite releases a number of molecules termed T. gondii excretory/secretory antigens (TgESAs) into its surrounding environment, which enables the organism invade and survive within the host cells through immunomodulation [2]. These TgESAs might be one of the first targets of the host’s immune system, and could be a valuable candidate for toxoplasmosis diagnosis and useful for the development of immunization strategies [3-6].

TgESAs from both the virulent and less virulent T. gondii strains display a chemokine-like activity, which leads to a dysfunctional dendritic cell-mediated immune response [7]. In murine bone marrow-derived macrophages, TgESAs not only inhibited the up-regulation of major histocompatibility complex (MHC) class II molecules, they also inhibited the release of tumor necrosis factor-α (TNF-α), a pro-inflammatory cytokine [8].

Macrophages resist toxoplasmosis by limiting parasitic replication and releasing cytokines that inhibit T. gondii infection [9-11]. Macrophages, a target for immunomodulation by the T. gondii, play a critical role in initiating and modulating the host immune response to T. gondii infection. In the present study, we examined the effect of TgESAs on modulating Ana-1 macrophage activities, which laied the foundation for further understanding of the effective immune-evasion mechanism used by T. gondii.

Ana-1 cells were exposed to different concentrations (0, 5, 10, 20, 40, 80 μg/mL) of TgESAs for 48 h, and the resulting cell viability was assessed. CCK-8 assay results showed that TgESAs significantly decreased Ana-1 cell viability (Figure 1). Decreased cell viability could be caused by the induction of apoptosis, so we measured the amount of early- and late- stage apoptotic cells. Both early-stage and late-stage apoptosis were induced by different concentrations of TgESAs at 48 h (Figure 2A, 2B). 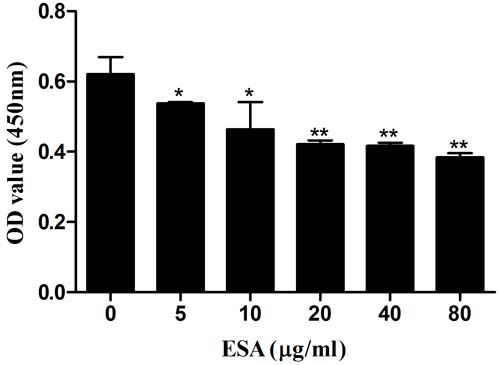 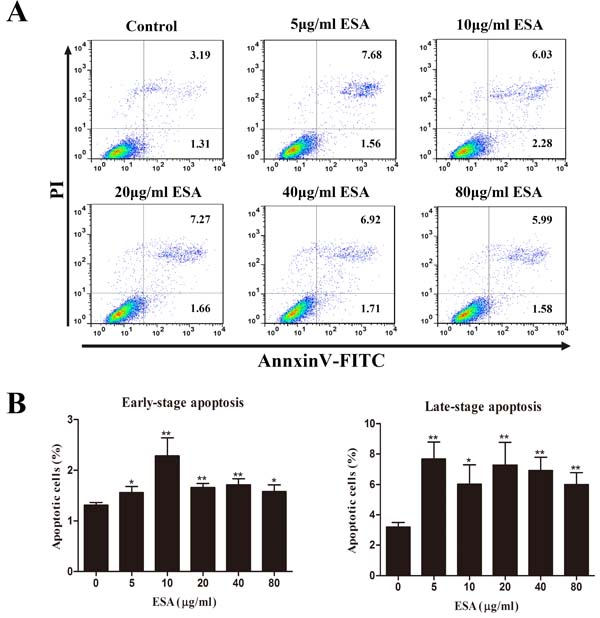 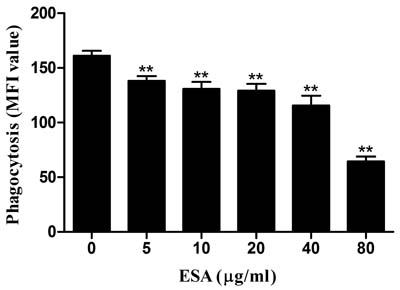 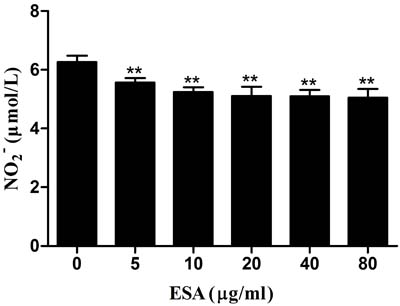 NF-κB levels were very low in the nucleus of the no treatment control (Figure 7). However, high nuclear NF-κB levels were observed after LPS treatment for 1 h. A 48h pre-treatment of Ana-1 macrophages with TgESAs significantly inhibited the LPS-induced NF-κB activation. 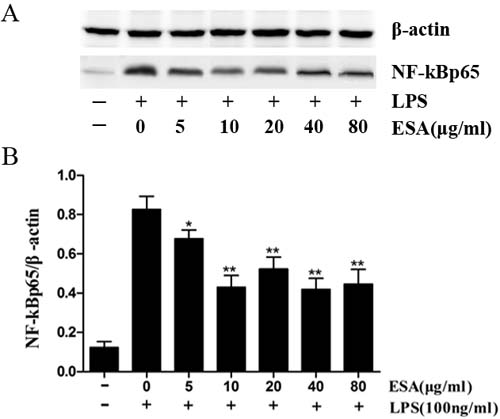 Figure 7: Effect of TgESAs on the activation of NF-kB, detected by Western blotting. (A) The nuclear NF-kB protein expression of Ana-1 macrophage cells that were treated with 0, 5, 10, 20, 40 or 80 μg/ml ESAs from T. gondii for 48 h before LPS stimulation at 100 ng/ml for 1 h. (B) The results were analyzed by Quantity One software and stated in NF-kB vs β-actin. Values are mean ± standard deviation of three independent experiments. *P < 0.05 and **P < 0.01 compared with control group (0 μg/ml TgESAs plus LPS). 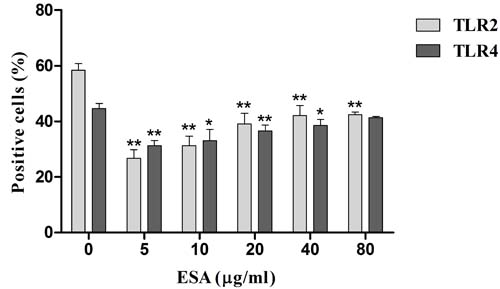 In the present study, TgESAs decreased Ana-1 cell viability and induced both early- and late-stage apoptosis. Inducing apoptosis could actually be the cause of the decreased cell viability. In agreement with our findings, the culture supernatant of T. gondii inhibited the proliferation and caused apoptosis of human gastric cancer BGC-823 cells, which might be related with up-regulating p53 expression and down-regulating Bcl-2 expression [12]. The exact mechanism of TgESAs-induced macrophage apoptosis needed further research.

In this study, we found that treating Ana-1 macrophages with TgESAs significantly inhibited the LPS-induced nuclear translocation of NF-κB p65. By inhibiting the NF-kB transcription factor, T. gondii tachyzoites suppress TNF-α and IL-12 secretion, which are pro-inﬂammatory cytokines [17].

TLR2 and TLR4 promote the recognition and stimulation of immune responses against T. gondii [21, 22]. In this study, TgESAs suppressed both TLR2 and TLR4 expression in Ana-1 cells. TLR4 can use both MYD88- and TRIF-dependent pathways to active the downstream pro-inflammatory transcription factor NF-κB [23]. TLR4 down-regulation inhibits NF-κB signaling, which is followed by the reduction of pro-inﬂammatory cytokines TNF-α and IL-1β. We demonstrated that TgESAs suppress pro-inﬂammatory cytokine secretion by inhibiting TLR-induced NF-κB activation.

In conclusion, TgESAs from the virulent RH strain (Type I) inhibited the functional activity of murine macrophage Ana-1 cells. These data reinforced the understanding of strategies used by T. gondii to evade anti-parasitic mechanisms of the host cell. T. gondii strains are highly diverse but only a few lineages (Type I, II and III) are widely spread [24]. Hence, it might need further study whether TgESAs from the less virulent strain (Type II) or non-virulent strains (Type III) exhibit the same inhibitory effects on functions of murine macrophages. Additionally, the discrete immunomodulators exhibiting the inhibitory effects on host macrophages should also be identified in future research.

This study was approved by the Ethical Committee of Animal Experiments of the College of Veterinary Medicine, Nanjing Agricultural University, China. All experimental protocols were approved by the Science and Technology Agency of Jiangsu Province. The approval ID is SYXK (SU) 2010-0005.

T. gondii RH tachyzoites were grown and maintained in BALB/c mice by intraperitoneal inoculation. Three to four days after infection, the peritoneal fluids from infected mice were collected in PBS. Tachyzoites were harvested by passage twice through a 27-gauge needle followed by filtration through a membrane with 5 μm pores (Millipore Corp., Bedford, MA, USA) to remove host cell debris. Parasites were washed twice, counted, and suspended in fetal bovine serum-free RPMI 1640 medium for preparing excretory/secretory antigens.

TgESAs were obtained according to a previously-described method [4] with minor modifications. Briefly, T. gondii tachyzoites (approximately 108 tachyzoites/ml) were resuspended in RPMI 1640 containing 100 IU/ml penicillin and 100 μg/ml streptomycin. Next, they were transferred to sterile 15 ml conical centrifuge tubes and incubated at 37 oC for 3 h with gentle shaking under sterile conditions. After incubation, tubes were centrifuged at 1000×g for 10 min, and their supernatants were collected. The supernatants referred to as TgESAs were concentrated by Millipore ultrafiltration tube (MWCO 3,000, Millipore Corp., Bedford, MA, USA). TgESAs were treated with AffinityPak Detoxi-Gel Endotoxin Removing Gel (Thermo Fisher Scientific, Waltham, MA, USA) to achieve an endotoxin level < 0.1 EU/mg and filtered through a 0.22 μm millipore membrane filter (Millipore Corp., Bedford, MA, USA), and stored at -80oC until use. The protein concentration of TgESAs was determined with a BCA protein assay kit (Bio-Rad, Hercules, CA, USA).

A CCK-8 assay was performed to measure the effect of TgESAs on cell viability of Ana-1 cells. Ana-1 cells were cultured in 96-well plates at a density of 2×105 cells/ml in the presence of different doses (0, 5, 10, 20, 40, 80 μg/mL) of TgESAs at 37oC in 5% CO2 incubator for 48 h. After incubation, 10 μL of CCK-8 solutions were added to each well of the plate for additional 2 h of incubation. The optical density of each well was measured at 450 nm using a microplate reader (Molecular Devices Co, Sunnyvale, California, USA). The data are expressed as the mean ± the standard deviation of the mean (SD) for at least three independent experiments.

The Ana-1 cells were treated with different concentrations (0, 5, 10, 20, 40, 80 μg/mL) of TgESAs for 48 h, followed by treatment with LPS (100 ng/ml) for an additional 12 h. Cell supernatants were collected and analyzed for nitrite (NO2-) accumulation as an indicator of NO production using a NO assay kit (Beyotime Institute of Biotechnology, Haimen, Jiangsu, China) according to the manufacturer’s protocol. Briefly, a standard curve was prepared with standard nitrite solutions in DMEM medium. The standard solutions or cell supernatants were reacted with nitrate reductase for 30 min in a 96-well plate, and then Griess reagent I and Griess reagent II were added. After a 10 min incubation at room temperature, the absorbance at 540 nm was read in a microplate reader. The samples were assayed in triplicate.

The levels of TNF-α, IL-1β, IL-10, and TGF-β1 in treated macrophage cell supernatants were determined using commercially available ELISA kits according to the manufacturer’s instructions (Boster Systems, Wuhan, China). The cytokine concentrations were determined by reference to standard curves constructed with known amounts of mouse recombinant TNF-α, IL-1β, IL-10, and TGF-β1. The analysis was performed with data from three independent experiments.

This work was supported by the Special Fund for Public Welfare Industry of Ministry of Agriculture of China (200903036-04) and the Priority Academic Program Development of Jiangsu Higher Education Institutions (PAPD).