Objective: To explore the influence of angiographic spontaneous coronary reperfusion (SR) on the short- and long-term outcomes in patients with ST-segment elevation myocardial infarction (STEMI).

Reperfusion strategy, including fibrinolytic therapy or primary percutaneous coronary intervention (PCI), is the key point to reduce mortality in ST-segment elevation myocardial infarction (STEMI). In daily practice, it is not rare that some patients may achieve reopening of the culprit artery without undergoing any reperfusion therapy, which is termed as spontaneous reperfusion (SR).

In previous studies, SR was defined as initial coronary flow of Thrombolysis in Myocardial Infarction (TIMI) [1] grade 3 assessed by emergent angiography [2–4]. Frequency of SR varies around 10%–30% [5–9]. Compared to non-SR (NSR) patients, SR is associated with a lower rate of short-term mortality or heart failure [2–5, 7, 9]. However, the relationship between SR and patient characteristics is still unclear. Moreover, fewer studies have reported the influence of SR on treatment strategy or long-term outcomes.

In the current study, we collected patients diagnosed with STEMI and tried to investigate the relation between clinical features and SR. We also explore the relationship of ST segment resolution and symptom relief and SR. Moreover, in-hospital events and long-term outcomes were compared between SR patients and NSR patients.

All patients received 300 mg of aspirin loading dose and 300 mg of clopidogrel, followed by 100 mg of aspirin maintenance dose and 75 mg of clopidogrel per day. Patient characteristics and in-hospital events were collected by questionnaires or medical records. In-hospital events referred to composite of any-cause death, reinfarction, congestive heart failure and cardiogenic shock [10]. Reinfarction was identified as an acute myocardial infarction occurred during the time of in the hospital after an incident myocardial infarction. Reinfarction was considered when ST elevation ≥ 0.1 mV recurs, or new pathognomonic Q waves appear, in at least two contiguous leads, particularly when associated with ischaemic symptoms for 20 min or longer. If the cTn concentration is elevated, but stable or decreasing at the time of suspected reinfarction, the diagnosis of reinfarction requires a 20% or greater increase of the cTn value in the second sample. If the initial cTn concentration is normal, the criteria for new acute myocardial infarction apply [11]. All biochemistry indexes were tested in the center laboratory within 24 hours.

Chest pain was assessed with a numerical rating scale (NRS). Patients were asked to rate their pain on an 11-point scale, where 0 indicated no pain and 10 indicated the worst imaginable pain [12] at the admission (emergency room or at home). Reduction in pain for each patient was inquired before initiation of emergency coronary angiography. Symptom relief was defined as above 50% easement of pain as compared to the top level of pain for each patient.

Electrocardiograms were examined at the admission and initiation of emergency coronary angiography. ST segment resolution was defined as 50–100% reduction in sum ST elevation.

Coronary angiography was performed using 5–6 French Judkins catheters through femoral or radial approaches [13]. The decision to perform PCI was made based on the discretion of operators. Usually, if patients in the SR group had significant stenosis in the target vessel or other vessels, we preferred to perform an elective PCI after 7 days of the initial angiography.

Follow up information was collected via phone call every 6 months. Primary endpoint was defined as major adverse cardiovascular and cerebrovascular events (MACCE), referring to composite of any-cause death, non-fatal cardiac arrest, acute coronary syndrome, congestive heart failure and stroke [14]. If any event occurred, primary endpoint was reached. This study was approved by the ethics committee of the hospital and the informed consents were obtained from patients. All authors have approved the manuscript and we confirm that all methods were performed in accordance with the relevant guidelines and regulations. The full disclosure of any potential conflict of interest has been declared.

Continuous variables are presented as mean ± SD or if not normally distributed as median with interquartile range. Two-sample t-tests or rank-sum tests were used to test group differences. For categorical variables, the data were summarized in percentages and X2 or Fisher exact test was used to assess group differences, where appropriate. Multivariate logistic regression analysis was performed to estimate odds ratios (OR) and 95% confidence intervals (95% CI) to identify independent predictors of SR. Long-term survival of MACCE was estimated with the Kaplan-Meier method. The Cox proportional hazard survival model was used to assess the association between SR and long-term outcomes while adjusting for potential confounders. A value of p < 0.05 was considered significant. All tests were two-sided, with a 5% level of significance. All analyses were performed using SPSS software 13.0 (SPSS Inc; Chicago, IL, USA). 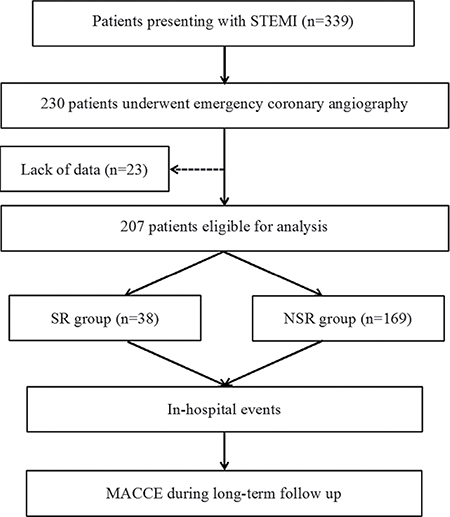 The coincidence rate of patients both with ≥ 70% ST-segment resolution and ≥ 70% relief of chest pain and SR was 100%. 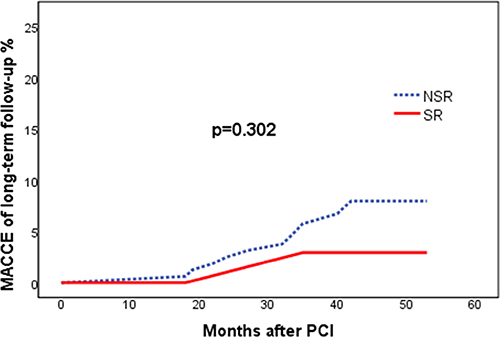 In this study, we found the incidence of SR was 18.4%. Combination of ≥ 70% ST-segment resolution with ≥ 70% of relief in pain could clinically predict SR with high accuracy. Platelet count, lower levels of blood glucose and uric acid, distal lesions and LAD as infarct-related artery (IRA) were independently associated with SR. More importantly, SR may result in lower rate of in-hospital events despite less stent placement.

Previous studies [6–8] have suggested that STEMI patients with SR had improved left ventricular function, lower incidence of congestive heart failure and decreased short-term mortality, as compared to patients without SR. In the current study, we also indicated significantly better in-hospital outcome among patients with SR. The possible mechanism could be: 1) SR may be associated with earlier opening time in occluded arteries, resulting in smaller myocardial infarct size. 2) In our study, 23.1% of patients in the NSR group did not achieve blood flow of TIMI grade 3, which may result in poor outcomes. Furthermore, when we only compared patients having TIMI grade 3, SR was still associated with lower in-hospital events. We therefore speculate that the SR group might have more effective reperfusion not only by the reopening of epicardial arteries but also in the microcirculatory level, as compared to patients in the NSR group. 3) Our data demonstrated that stent placement could be safely deferred in the patients with SR. The SR group had a lower rate of stent placement (10.5% vs. 84.6% in emergent procedure and 60.5% vs. 86.4% totally) which might be associated with less procedure-related complications as compared to NSR group. Future studies are needed to confirm our speculations regarding the mechanism of benefit associated with SR.

Although SR was associated with favorable in-hospital events, but no significantly difference was verified with regarding to the long-term follow up. The MACCE were 2.6% in SR group and 6.9% in NSR group, which were relatively lower compared to previous studies [15]. This may somewhat reflect the improvement on management of STEMI and therefore diminish the gap on prognosis between the two groups. Moreover, patient amount was relatively small in the current study, which may impair the power of statistical analysis.

In fibrinolytic era, complete resolution of ST segment elevation, early peaking of biomarkers, reperfusion arrhythmias and relief of chest pain, has been investigated for noninvasive assessment of TIMI grade 3 after thrombolytic therapy, indicating patency of the culprit vessel [16–18]. Even so, clinical features are still considered to be poor markers of reperfusion, without any combinations of them being more able to predictive coronary artery patency more reliably [19]. In our study, when ST segment resolution ≥ 70% and symptom relief ≥ 70% were combined to predict SR, the coincidence rate of patients both with ≥ 70% ST-segment resolution and ≥ 70% relief of chest pain and SR was 100%. Thus, it may be feasible for physicians to accurately identify the restoration of coronary blood flow in patients with STEMI, based on those clinical features.

Since endogenous fibrinolysis or pretreatment with anti-thrombotic agents is regarded to be conducive to SR [2], some clinical characteristics may be associated with SR. Rimar D [10], et al. found the incidence of SR was 4% of STEMI patients, and old age, preinfarction angina, hypertension, non-Q wave myocardial infarction, and Killip class I on admission were independent variables associated with SR. However, Stone GW [2], et al. indicated the rate of SR is 16% but no baseline characteristics clearly predicted SR. In this study, we founded that higher level of uric acid and blood glucose were independently related to SR. Akpek M [20], et al. reported uric acid had a negative relation with TIMI blood flow in STEMI patients undergoing primary PCI. Timmer JR [21], et al. showed hyperglycemia could predict an initial TIMI flow grade 0 to 2 before primary PCI in STEMI patients. Theoretically, uric acid may promote activation of clotting factors, inhibit natural anticoagulant and lead to mural thrombosis through inflammation or platelet pathway, therefore inhibit thrombus autolysis [22–23]. Hyperglycemia could increase activation platelet, damage endothelium-dependent vasodilation and increased inflammatory responses, finally affect platelet function, blood coagulation and fibrinolysis, leading to thrombosis hard to dissolve [24–25]. Interestingly, our data showed patients in SR group had lower platelet levels compared to NSR group. We speculate that these patients may have more severe platelet consumption due to higher thrombotic burden in the culprit lesion. Further studies are needed to elucidate the mechanism.

Limitations of the study include that all data were collected from one institution which may leave selection bias. Moreover, we could not identify the exact duration between coronary blockage and reopening in SR patients. Also, we did not have data about peak levels of CK-MB or troponin to represent and compare the myocardial damage between the SR and NSR groups. Additionally, we speculated that less PCIs might be associated less procedure-related complications, which may partly account for the favorable outcome in the SR group. However, no consolidate data supported it. Further studies are needed to confirm this point. Finally, this study could not reflect influence of new anti-thrombosis agents on SR.

Spontaneous reperfusion is not rare daily practice. SR is associated with favorable outcomes, despite of less stent usage. Stent placement could be safely deferred in the patients with SR.

There were no potential conflicts of interest.

This study was supported by the grant 81470491 from the National Natural Science Foundation of China to Dr. Li.