The aim of this study was to evaluate the predictive role of preoperative retinal nerve fiber layer (RNFL) thickness for postoperative visual recovery in patients with chiasmal compression through performing a meta-analysis. PubMed, EMBASE, Cochrane Library and China National Knowledge Infrastructure were searched for relevant studies. The study and patient characteristics were extracted. Pooled odds ratio (OR) with 95% confidence interval (CI) was calculated to estimate the predictive value of RNFL thickness. Subgroup analyses were also performed. Four studies with 202 patients and 395 eyes were included. The pooled results showed that patients with normal RNFL thickness could achieve better visual recovery compared with those with thin RNFL with the OR of 15.61 (95% CI, 4.09-59.61). Significant heterogeneity was observed (I2 = 54.5%, P=0.086). Publication bias was not present. Normal preoperative RNFL thickness could predict better postoperative visual recovery than thin RNFL in patients with chiasmal compression.

Sellar and parasellar region lesions, such as pituitary adenoma, cystic lesions, craniopharyngioma and meningioma, always lead to the compression of optic chiasm [1–3]. Among them, pituitary adenoma, which accounts for 12–15% of all intracranial lesions, is the most common [4]. As a consequence, visual impairment, including visual field (VF) defects and loss of visual acuity (VA), is a common complaint in these patients [3, 5]. Surgical removal of the lesions is an important aspect of clinical management. Although some patients could gain an appreciable visual recovery after surgical decompression, a great number of them could not [6]. Many researchers have investigated potential predictive factors, and variables such as age, size of tumor, preoperative visual impairment, preoperative duration of symptoms and optic atrophy were suggested [7–9]. However, conflicting results still remain, and none of them were regarded as reliable predictors for visual recovery [10, 11].

The initial literature search identified 356 studies. After removing duplicates, 285 studies were reviewed for titles and abstracts. Six reviews, 13 case reports and 245 unrelated articles were excluded. The rest 21 studies were assessed in full text and 17 were excluded due to unrelated or lack of enough data. Finally, 4 studies [3, 11, 14, 15] were included in this meta-analysis. The study selection process was shown in Figure 1. 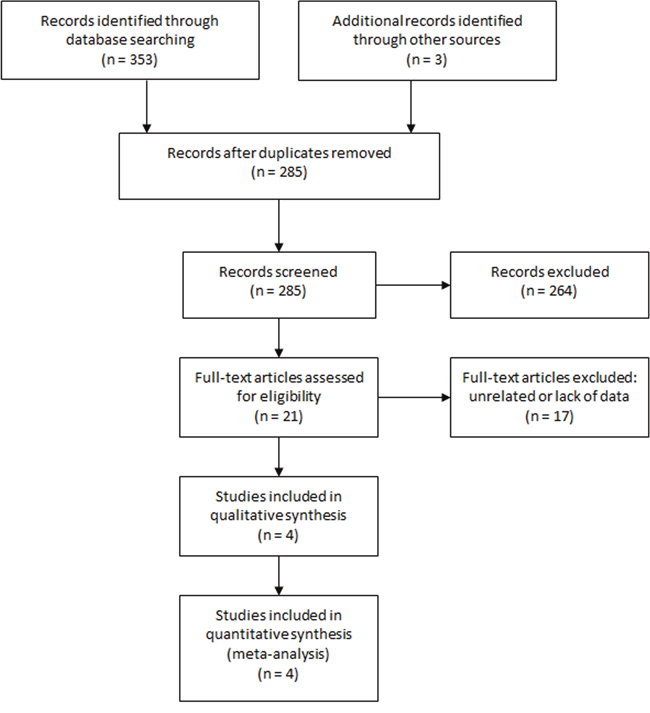 The main characteristics of the 4 included studies were shown in Table 1. The patients in two of the four studies were from Asia. Three studies were prospective and one was retrospective. The total number of patients was 202 (range from 25 to 107) with 395 eyes (range from 49 to 213) investigated. All the patients were diagnosed with chiasmal compression and were treated with surgery. Three studies used visual field examination as visual function evaluating tool while one study used visual acuity examination. Three studies had a follow-up time of more than 3 months and one study assessed postoperative visual function within 6 weeks after surgery. All the studies concluded that normal RNFL thickness predicted better visual recovery.

# RNFL cut-off: thinner than 99%/97.5%/95% of normative values obtained from the manufacturer’s database; 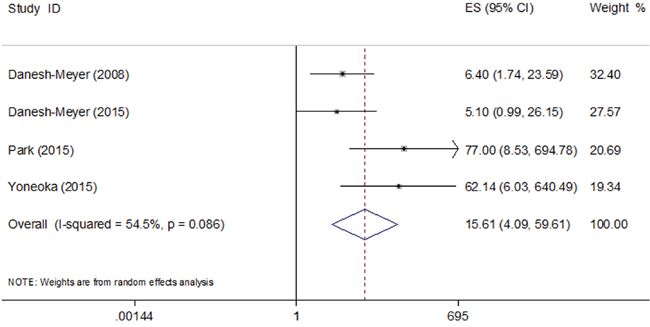 Figure 2: Pooled odds ratio (OR) of visual recovery in patients with normal RNFL thickness compared with those with thin RNFL.

All the pooled results were shown in Table 2. 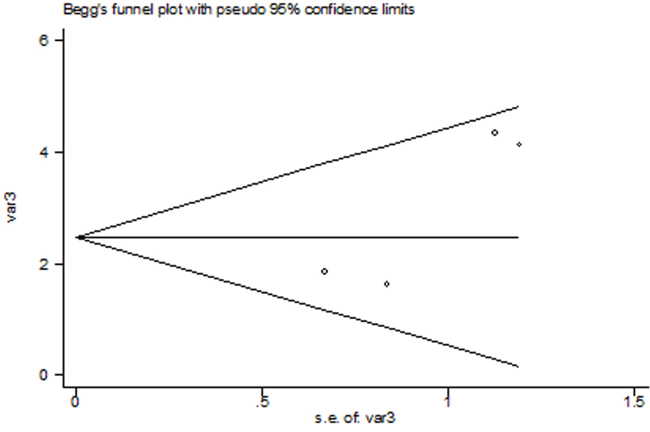 Figure 3: The Begg’s publication bias plot of the 4 included studies.

Subgroup analyses were also performed to examine the role of RNFL thickness. The pooled OR in the Asian group was much higher than that in the non-Asian group, demonstrating that the predictive value of RNFL thickness for visual recovery might be stronger in Asian population than non-Asian population. The OR in the only one retrospective study was much higher than the pooled OR of the three prospective studies, and that could be explained that the retrospective study might have potential selection bias. The pooled OR of the three studies that used visual field examination as visual function evaluating tool was higher than the OR of the study that used visual acuity examination, showing that RNFL thickness might better predict visual field recovery than visual acuity recovery. The pooled OR of the three studies that had a follow-up time of more than 3 months was higher than the study with the follow-up time within 6 weeks, suggesting that RNFL thickness might have a stronger predictive value for long term visual recovery. Some researchers found that most visual recovery occurs within 3 months [14], even within 2 weeks [15]. Lee et al. [10] found that the visual field did not recovery significantly between 3 and 6 months after surgery. So our results revealed that normal RNFL thickness might lead to better long term visual recovery. We also found that the pooled OR in the pituitary adenomas group/transsphenoidal group was almost the same as that in the mixed tumors group/non-transsphenoidal group. As we know, there is little surgical trauma via transsphenoidal approach [11]. Our results showed that RNFL thickness could well predict visual recovery no matter whether there was much surgical trauma to the visual pathway or not. However, one thing that should be paid attention to is that our study was based on only four studies, so our conclusions from subgroup analyses are still open to discuss.

Despite the included studies, Jacob et al. [18] found that, for each increase by 1μm of mean RNFL, the odds of complete recovery was multiplied by 1.29 (P=0.037) three months after the initial VF defect. Also, Garcia et al. [19] found that nasal RNFL thickness was a good prognostic factor for VF recovery with the OR of 1.56 per 15 μm (P=0.041). Furthermore, Avery et al. [20] suggested the use of RNFL thickness measurement as a biomarker of vision in children who could not cooperate for VA/VF testing. Since the thinning of RNFL reflects axonal degeneration of RGC, undelayed surgical decompression before axonal loss is desired. Maybe in the future, with the evidence accumulates, the time for surgical treatment rely on the preoperative RNFL thickness even in asymptomatic patients with chiasmal compression.

Nevertheless, a thin RNFL could not preclude visual recovery and RNFL thickness is not the only marker for visual recovery. Other factors, such as age, preoperative duration of symptoms, optic atrophy, size of tumor, adjacent tissue adherence of tumor [21], and optic canal invasion [11] are also important in visual recovery. Considering that, Lee et al. [10] constructed a nomogram to predict restoration of the visual field in patients with pituitary adenomas using MRI compression grade, preoperative VF, and preoperative inferior RNFL thickness. The area under the curve (AUC) of their nomogram was 0.84. More well-designed studies are warranted to establish a good predictive model for visual recovery after decompressive surgery to allow a tailored counseling of individual patients.

There are some limitations in this study. Firstly, our meta-analysis was based on a limited number of studies. And the results in the subgroup analyses were not definitely accurate. Secondly, the cut-off values of RNFL thickness in the included studies varied. More studies are needed to address the best cut-off value to predict visual recovery. Furthermore, significant heterogeneity was present and random effects model was used. Besides, publication bias was a major concern for all meta-analyses. No publication bias was found in our study, but it should not be completely excluded.

We followed the developed guidelines for systematic reviews and meta-analyses in performing our study [16]. PubMed, EMBASE, Cochrane Library and China National Knowledge Infrastructure (CNKI) were searched for potentially relevant literature (last search ran on Nov 16th, 2016). The following search terms were used: (chiasmal compression OR optic chiasm compression OR parachiasmal OR optic chiasm OR sellar OR parasellar OR pituitary neoplasms OR craniopharyngioma OR parachiasmal meningioma) AND (retinal nerve fiber layer OR optical coherence tomography) AND (vision OR visual). Reference lists of selected articles were also screened for any additional studies. No language restrictions were used.

The study selection process was performed by two reviewers (J.Z. and Z.W.) independently with any discrepancies being discussed. Studies were included according to the following inclusion criteria: (1) the patients were diagnosed with chiasmal compression and surgery was indicated; (2) preoperative RNFL thickness and visual function were assessed in patients; (3) postoperative visual function was also assessed; (4) enough data were reported to estimate the prognostic role of preoperative RNFL thickness in postoperative visual recovery. Visual recovery was defined as the improvement of visual acuity or visual function. Reviews, letters, meeting abstracts, case reports, unrelated articles, and studies without enough data were excluded.

Two independent researchers (J.Z. and Y.S.) extracted the data from the included studies and disagreements were resolved by consensus. Odds ratio (OR) with 95% confidence interval (CI), or the data that could be used to calculate the OR with 95% CI was extracted as primary data. If adjusted OR and unadjusted OR both existed, adjusted OR was used. The study and patients characteristics included first author, publication year, patient source, study design, number of samples, patients’ mean age and sex, tumor type, surgical details, the machine type used to measure RNFL thickness, the cut-off value of RNFL thickness, visual function evaluating tools, follow up time and study attitude.

As to the studies without OR or 95% CI, OR and 95% CI were calculated using the patients data by RevMan 5.1 (Cochrane collaboration, Oxford, UK). The logOR and variance were then calculated and used for aggregation of the prognostic role of RNFL thickness. The data was pooled together by STATA 11.0 (STATA Corporation, College Station, TX). Forest plots were used to estimate the pooled OR. The pooled OR was considered significant if the 95% CI did not overlap 1 and the P value was less than 0.05. Subgroup analyses based on patient source, study design, tumor type, surgical details, visual function evaluating tools and follow up time were performed. The between-study heterogeneity was assessed and significant heterogeneity was considered present with P value<0.10 or I2>50% [17]. A random effect model was used if heterogeneity existed. And sensitivity analysis was performed to examine the contribution of each study to heterogeneity by excluding individual studies one at a time when heterogeneity was present. Publication bias was assessed by Begg’s test with P<0.05 indicating potential publication bias. Heterogeneity assessment and publication bias assessment were performed by STATA 11.0.

In conclusion, our study suggested that normal preoperative RNFL thickness could predict better postoperative visual recovery than thin RNFL in patients with chiasmal compression. These findings could help the management of the timing of surgery, counseling patients on prognosis, and even monitoring disease progression. More studies are needed to corroborate these findings and address the predictive value of each quadrant of RNFL. Moreover, studies are warranted to establish a model that takes account various factors to predictive visual recovery.

The authors received no funding.