The positive lymph node ratio (LNR) has been suggested as a predictor of survival in patients with esophageal carcinoma (EC). However, existed evidences did not completely agree with each other. We sought to examine whether LNR was associated with overall survival (OS). Electronic database was searched for eligible literatures. The primary outcome was the relationship between LNR and OS, which was presented as hazard ratio (HR) with 95% confidence intervals (CIs). All statistical analyses were performed using STATA 11.0 software. A total of 18 relevant studies which involved 7,664 cases were included. Patients with an LNR of 0.3 or greater had an increased risk of death compared to those with an LNR of less than 0.3(HR = 2.33; 95% CI 2.03-2.68; P<0.01). Similarly, patients with an LNR greater than 0.5 was also associated with a decreased OS(HR = 1.95; 95% CI 1.52-2.50; P<0.01). No publication bias was found. This meta-analysis confirmed that LNR was a significant predictor of survival in patients with EC and should be considered in prognostication.

Esophageal cancer (EC) is one of the most common and aggressive malignancies globally, resulting in more than 400,000 deaths each year [1]. Despite the significant improvement in its diagnosis and treatment in recent decades, the prognosis of EC patients remains poor. Radical esophagectomy and subsequent lymph node (LN) dissection are considered the best option for potentially curable EC patients. The status of LN metastasis is a key factor that closely relates with the long-term survival of EC patients who underwent surgery [2-5]. Both involved LN and retrieved LN count are prognostic [6, 7]. However, insufficient LN retrieval would happen because of various factors such as physical condition of each patient, surgical or pathological diagnosing skills in clinical practice, and the number of the pathologically involved lymph nodes is significantly influenced by the number of the removed LNs.

Recent studies have proposed a superior prognostic factor, the positive lymph node ratio (LNR), for EC patients especially when insufficient LN retrieval happened [8-10]. LNR, also known as metastatic lymph node ratio (MLNR), is the ratio of the number of positive lymph nodes to the total number of dissected lymph nodes. LNR has been proposed to be used to assess the prognoses of several other solid cancers, such as colorectal cancer, non-small-cell lung cancer and pancreatic adenocarcinoma [11-13]. However, its prognostic significance in EC patients is still controversial as the existed evidence did not completely agree with each other. We sought to examine the relationship between LNR and prognosis of EC by integrating all available published data.

We identified 1,448 potentially relevant records according to the search strategy. 1,376 studies were excluded after checking the corresponding title and abstract. Then the full texts of 72 articles were carefully reviewed. A total of 18 studies [8, 9, 14-29] were finally included in this meta-analysis according to the eligible criteria. Figure 1 summarized the flow chart. 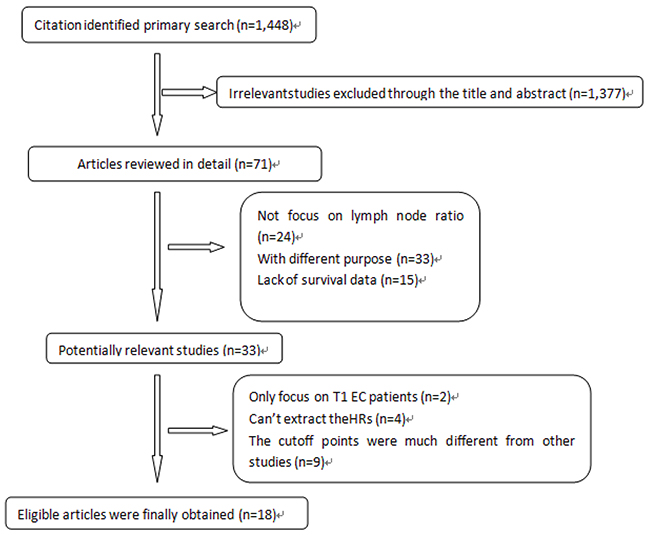 Our meta-analysis was composed of 18 studies including 7,664 EC patients. These studies were conducted between 2000 and 2016. The characteristics of all included studies were summarized in Table 1. We listed the HRs and their 95% CIs under specific cut-off values of the LNRs of the collected studies in Table 2. Since the determined cut-off values of the LNRs varied from study to study, we uniformed the cutoffs for the LNRs according to the selection in the majority of studies. Therefore, 0.3(representing the range from 0.2 to 0.4) and 0.5(representing the range from 0.4 to 0.6) were selected as the cutoff values of LNR in our study.

Table 1: Characteristic of the included studies 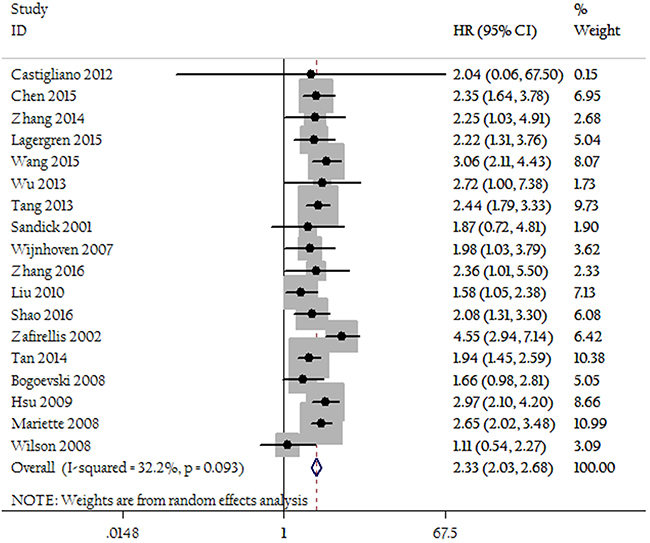 Figure 2: Forest plots show the association between LNR of 0.3 and overall survival. 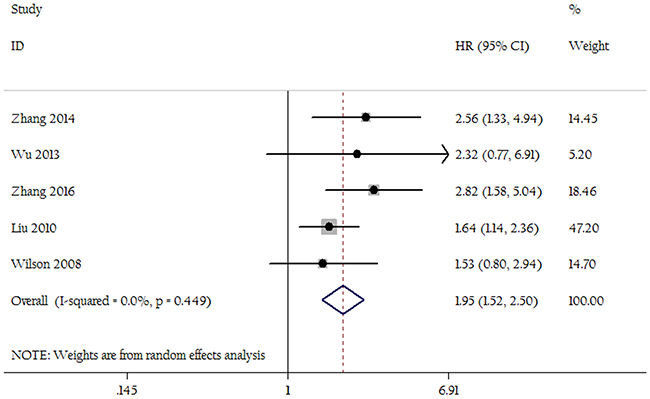 Figure 3: Forest plots show the association between LNR of 0.5 and overall survival. 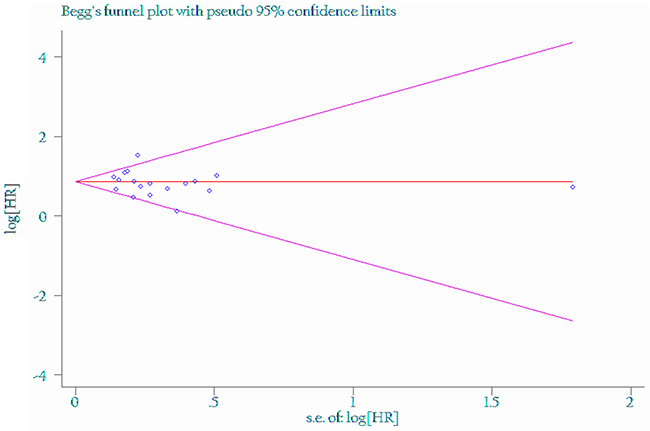 Figure 4: Funnel plot of the association between LNR of 0.3 and overall survival. 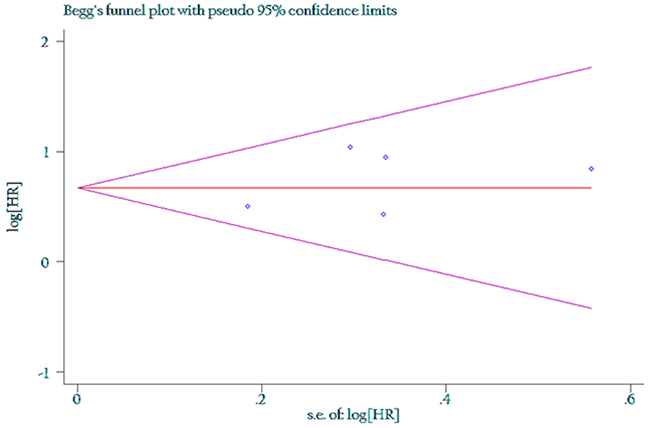 Figure 5: Funnel plot of the association between LNR of 0.5 and overall survival.

Tumor staging system has multiple roles: prognosis prediction, determination of treatment strategy, and the adjustment for the comparison of treatment effects. The status of LN metastasis in patients with esophageal cancer has been considered a pivotal prognostic factor [30, 31]. Since the accuracy of the number of metastatic LNs depends on the number of nodes removed, the 7th edition AJCC TNM staging system suggested more than 12 nodes should be sampled. To allow best predictive outcome, Peyre et al. have suggested that the number of removed nodes should range from 23 to 29 [32]. Considering the total number of LNs retrieved may be affected by many factors, LNR emerged as a more simple strategy to make up for insufficient LN retrieval. Furthermore, emerging evidence indicates that LNR showed better prognostic value than metastatic LN number for esophageal cancer [17, 33, 34].

Combining the available data of 18 studies, our results confirmed that no matter the cutoff point was 0.3 or 0.5, higher LNR is significantly associated with a poorer survival of esophageal cancer. Observations on other malignancies from many other studies were consistent with ours that LNR could be a prognostic factor. Sun and his coworkers [35] published a meta-analysis involving12 observational studies, showing that higher LNR was significantly associated with a poorer survival of NSCLC(OS HR=1.93; 95% CI 1.64-2.28, DDS HR=1.82; 95% CI 1.55-2.14). A previous meta-analysis also indicated that LNR was a prognostic factor with regard to overall survival for breast cancer and colorectal cancer [36, 37].

Since the different extent of lymph node dissection and the pathological type of esophageal cancer, various cutoffs of LNR have been used in different studies. For breast cancer, Liu et al. suggested that the suitable cutoff point were 0.2 and 0.65 [36]. In the present study, we determined 0.3 and 0.5 as cutoff values since they were used in most of the articles.

This is the first study to comprehensively answer the prognostic role of LNR in EC patients. However, there are several limitations. First, it was based on retrospective analyses; prospective analysis is needed to further clarify these issues. Second, the different cutoff values for defining high LNR may have contributed to heterogeneity. Third, we can’t rule out the effects of the chemotherapeutic agents or radiotherapy after surgery or concurrent radiochemotherapy (CRT) before surgery as such information was not provided in the original reports. In addition, we cannot study adenocarcinoma and squamous cell carcinoma, or the location of the tumor separately for insufficient information provided by primary studies; we can distinguish the prognostic roles of LNR on these subtypes. Further studies are warranted.

In conclusion, this meta-analysis confirmed that LNR was a strong predictor of survival in patients with EC. The appropriate incorporation of LNR into the prognostic system or the treatment determination (such as postoperative radiotherapy) of EC should be discussed.

All relevant articles were retrieved by searching PubMed, Embase and the Central Registry of Controlled Trials of the Cochrane Library using a combination of the terms: (“EC or “esophageal carcinoma” or “esophageal cancer”) and ratio. No restriction by language or year was set in the search. The last research time was October 23, 2016. References from relevant articles, including review papers, were also reviewed.

Eligible studies should meet the following criteria: (1) studies which evaluated the association between LNR and prognosis of EC. (2) studies published in English or Chinese regardless of publication time.(3) the original papers containing enough data. Studies failed to meet the inclusion criteria will be excluded.

Two authors searched eligible studies and extracted information independently and finally negotiate to reach consensus. Details of publication characteristics such as first author’s name, publication year, middle/mean age of study sample, sample size, T stage, N stage, cutoff point and hazard ratio (HR) and the corresponding 95% CI were collected from each eligible publication. If the results of univariate and multivariate analysis were both reported in a study, the former was chosen. If precise HR (95% CI) were provided in the study, we used them directly, otherwise we used Engauge Digitizer version 2.11 software to extract relevant numerical value from survival curves and calculate the HR(95% CI) when only Kaplan-Meier survival curves were provided [38, 39].

Cochran’s Q-statistic test and I2 test were used to calculate the heterogeneity. As to Q-statistic, P < 0.05 was considered to have statistical significance. For I2 statistics, I2 < 25% indicated no heterogeneity; I2 = 25–50% indicated moderate heterogeneity; and I2 > 50% indicated strong heterogeneity [40, 41]. A random effects model was applied to minimize the impact of any potential bias. Subgroup analysis and sensitivity analysis were performed. Sensitivity analyses were conducted to assess the strength of our findings by excluding one study at a time. Publication bias was investigated by funnel plots and by Egger’s test. All statistical analyses were performed with STATA 11.0 software.

We declare no conflicts of interests.