CD147 as a novel biomarker for predicting the prognosis and clinicopathological features of bladder cancer: a meta-analysis

Objective To assess the prognostic and clinicopathological characteristics of CD147 in human bladder cancer.

Methods Studies on CD147 expression in bladder cancer were retrieved from PubMed, EMBASE, the Cochrane Library, Web of Science, China National Knowledge Infrastructure, and the WanFang databases. Outcomes were pooled with meta-analyzing softwares RevMan 5.3 and STATA 14.0.

Conclusion CD147 could be a biomarker for early diagnosis, treatment, and prognosis of bladder cancer.

Bladder cancer is the ninth most common cancer worldwide [1]. It was estimated that 76,960 new cases (4.6% of all new cancer cases) and 16,390 deaths would occur due to bladder cancer in the United States in 2016 [2]. High-grade invasive bladder cancer usually has a worse prognosis than low-grade superficial tumors. Unfortunately, approximately 30% newly diagnosed bladder cancer patients have invasive cancer [3], and 10-20% of superficial tumors will progress to invasive diseases. Thus, prediction of the progression of bladder cancer in certain patients remains a major challenge. Invasive cystoscopy is the most common method to detect suspected bladder cancer, because of the low sensitivity of other diagnostic tests, like urine cytology [3]. Bladder cancer has different biological characteristics, and patients with the same disease stage may have divergent clinical courses and different outcomes after receiving the same therapy [4]. Therefore, there is an urgent need for more sensitive and specific biomarkers that provide reliable information for tumor diagnosis, and elucidate the biological behavior of these tumors. This may allow more precise assessment of and better-targeted effective therapy for bladder cancer. A number of biomarkers such as survivin [5], fascin [6], MCT1, MCT4, and CD147 [7] were found to be involved in the development and progression of bladder cancer. Among these biomarkers, CD147, or extracellular matrix metalloproteinase inducer (EMMPRIN), is a transmembrane protein that acts as an important mediator of tumor cell invasion [8]. It is overexpressed in various tumors such as breast, lung, oral, esophageal, laryngeal, and renal cancers [9–14]. In vitro suppression of CD147 has been shown to inhibit the proliferation, migration, and invasion of T24 bladder cancer cells [15]. There are also a number of studies on CD147 expression profiles in bladder cancer patients, which indicate that CD147 may serve as a prognostic biomarker. However, some of these study results are controversial. For example, some studies showed that the positive expression of CD147 predicts poor overall survival (OS) [4, 7, 15-18], while Afonso et al. [16] and Choi et al. [7] declared no significance of positive or negative expression of CD147. Furthermore, Afonso et al. [16] and Han et al. [19] claimed that CD147 predicts poor disease specific survival (DSS), which contradicts the results of Hemdan et al. [17]. Some studies showed a significant association between CD147 over-expression and tumor stage [7, 20], while others disputed this [21]. The same conflict was also seen in the studies of lymphatic invasion status [7, 22], TNM stage [21, 23], and recurrence status [18, 24]. Therefore, we conducted this meta-analysis to quantitatively evaluate the relationship between CD147 and clinicopathological features and survival of bladder cancer patients.

A total of 147 studies were identified, of which 63 were excluded because of duplication. After reading the titles and abstracts, a further 50 studies were excluded. The remaining 34 full text studies were carefully reviewed (animal studies [n=3]; review and meta-analysis [n=5]; no control group [n=2]). Finally, 24 studies [4, 7, 15-36] were included for quantitative analysis (Figure 1). 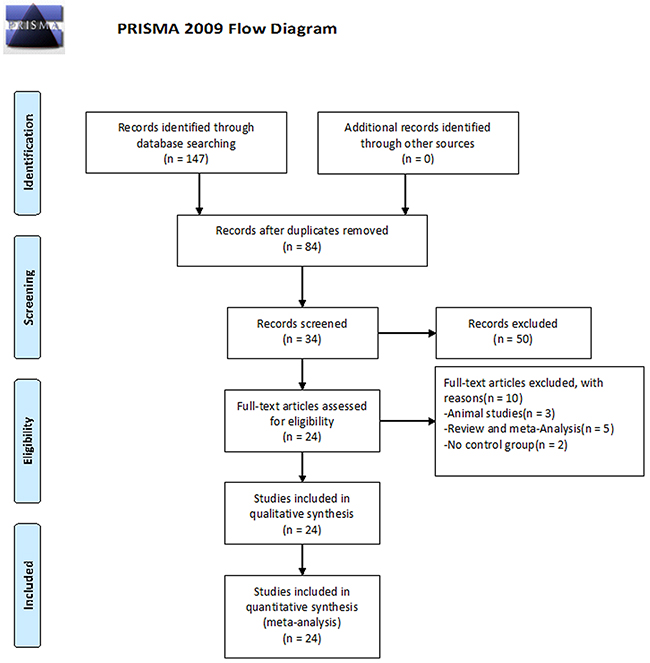 The characteristics of these studies are summarized in Table 1. A total of 2493 patients, with or without bladder cancer, are included in 24 studies mostly in China (sixteen studies conducted in China [15, 18, 19, 21-25, 28-35], one from Portugal [16], one from Sweden [17], one from Korea [7], one from Egypt [20], one from India [26], one from Germany [27], one from Denmark [4], and one from Japan [36]). 8 studies [4, 7, 15-19, 22] with 9 datasets (the study by Hemdan et al. [17] had 2 datasets, grouped based on differences in treatment) are included in the survival analysis (Table 2). The pathological types of bladder cancer were transitional cell carcinoma, squamous cell carcinoma, and adenocarcinoma. The studies were published between 1993 and 2015. Immunohistochemistry (IHC) was used to detect the expression of CD147 in all studies, while reverse transcriptase polymerase chain reaction, Western blot, array analysis, immunoelectron microscopy, and nucleic acid in situ hybridization were also used in six studies [4, 21, 22, 26, 27, 36].

Table 2: Characteristics of the included studies

#: chemotherapy prior to cystectomy

The study quality was assessed using the Newcastle-Ottawa quality assessment scale (NOS), generating scores ranging from 7 to 8 (with a mean of 7.25), where a higher value (0-9) indicates better methodology. The results of the quality assessment are shown in Table 1, with detailed information shown in Supplementary Table 1.

We conducted a subgroup analysis based on IHC and cut-off values. This revealed that CD147 expression is correlated with a poor prognosis for bladder cancer in almost all subgroups (P<0.05), except multivariate analysis of OS (P=0.081) and DSS (P=0.068) in positive cell percentage only subgroup and multivariate analysis of DSS (P=0.153) in non- streptavidin-perosidase (SP) subgroup. This may attributes to the insufficiency of sample size and studies. In summary, our results are reliable (Table 3). 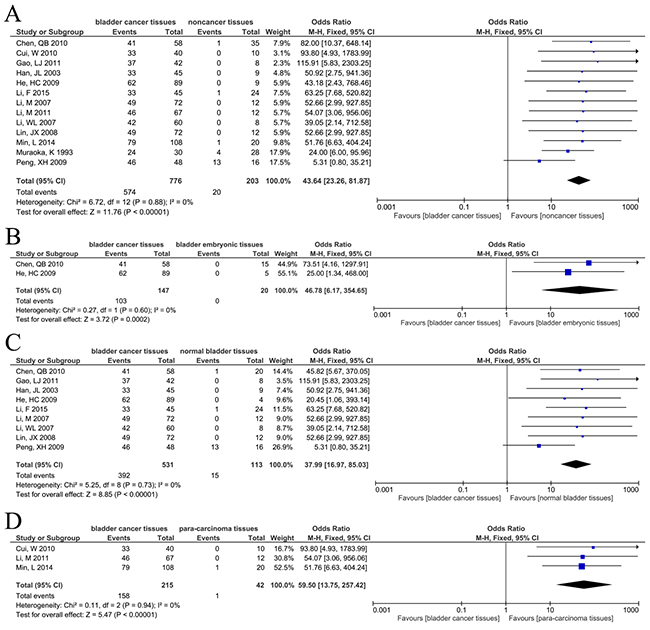 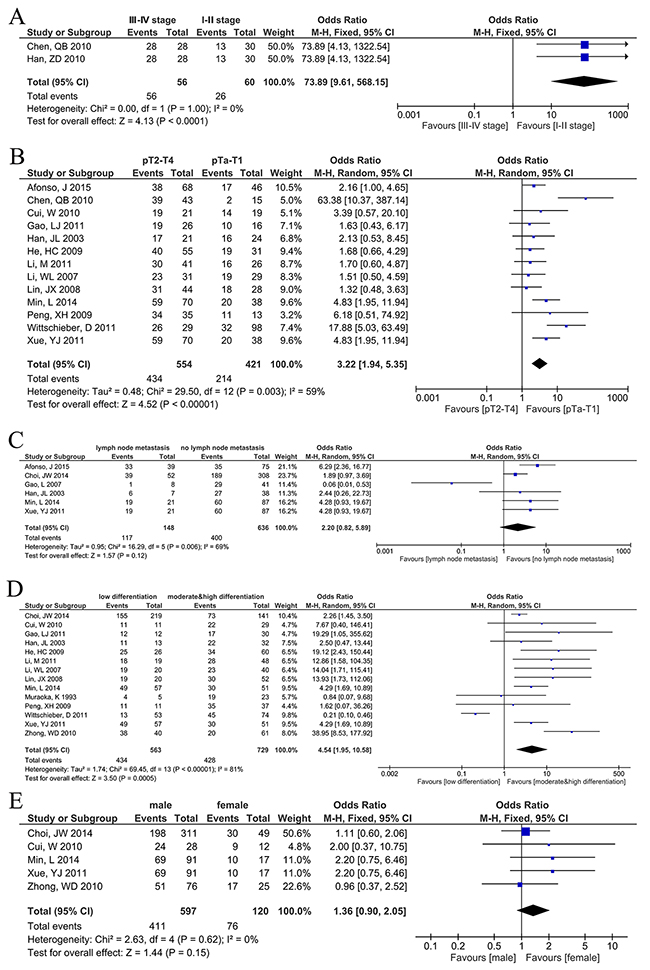 Correlation of CD147 with invasive depth

A sensitivity analysis was performed to evaluate the reliability of the results. While multiple datasets were available, sensitivity was tested by excluding studies one by one. Except in the case of Lymph node metastasis vs. No lymph node metastasis, all analyses were stable. To test for publication bias, we use Egger's test. All P values were higher than 0.05, indicating no publication bias. In summary, the results were stable and reliable (Table 4, Figure 5 and Figure 6). 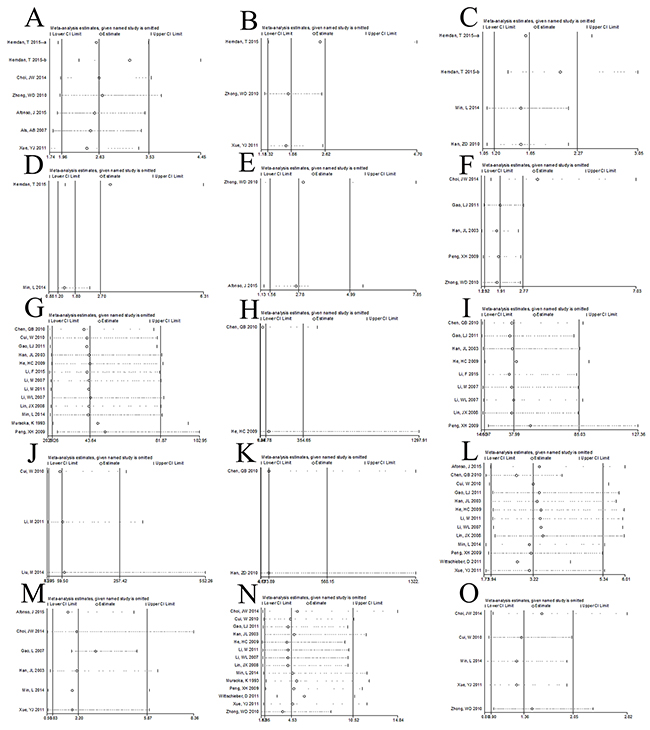 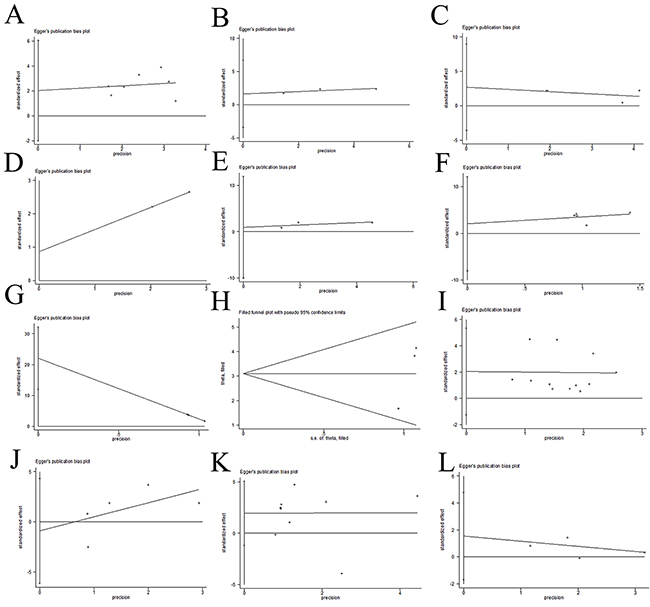 CD147, also known as EMMPRIN, is a transmembrane glycoprotein in the immunoglobulin superfamily. It is highly expressed in many types of malignant tumors, including breast carcinoma, gastrointestinal cancer, prostate cancer, and bladder cancer, and plays a significant role in tumor proliferation, invasion, metastasis, as well as in many other processes in tumorigenesis and tumor development [37–39]. In the current meta-analysis, we pooled 25 datasets from 24 studies [4, 7, 15-24, 25-36] and demonstrated a notable association between CD147 expression and patients with bladder cancer.

Furthermore, CD147 expression is associated with the response to chemotherapy for bladder cancer, and Misra et al. [43] demonstrated that CD147 enhances tumor growth and chemoresistance via the phosphatidylinositol 3-kinase (PI3K)/Akt pathway in a hyaluronan-dependent manner. Als et al. [4] found that the response rates in patients with CD147-negative and CD147-positive tumors were 74% and 39% respectively, with an odds ratio of 4.41 (95% CI=[1.91-10.1]). In addition, by silencing CD147 via RNA interference In vitro, Afonso et al. [16] showed a lower cisplatin IC50 for bladder cancer (from 24.11 μg/ml to 7.42 μg/ml). That is, the downregulation of CD147 sensitizes bladder cancer cells to chemotherapy.

To our knowledge, this meta-analysis is the first to report the relationship between CD147 and bladder cancer. We analyzed 24 high-quality studies (NOS≥7 points) with significant results. Meanwhile, some limitations need to be acknowledged. First, our analysis is based upon published studies found in the literature, but we failed to obtain any unpublished data. Second, patients we included are mostly from China, which limits the universality of our results. Third, different studies used different criteria for CD147 expression, with different follow-up times. This may result in some bias. Nevertheless, we conducted subgroup analyses based on IHC and cut-off values, and this indicates that our results were reliable.

In this meta-analysis, we demonstrated that CD147 expression is increased in bladder cancer tissues compared with non-cancer tissues. This is strongly correlated with poorer OS, DSS, and DFS; recurrence; advanced clinical stages; greater invasive depth; and poorer histological differentiation. However, it was not correlated with lymph node metastasis or sex. In summary, CD147 could be an important diagnostic and prognostic biomarker for bladder cancer.

Criteria for including studies

1. Published or unpublished case control study or cohort study in English or Chinese with the full text available;

2. All cases had survival data or clinical pathological characteristic data, without radiotherapy or chemotherapy or biological therapy before sampling;

3. Diagnosis of bladder cancer was proven by pathological methods;

4. Studies of CD147 expression based on primary bladder cancer tissue (via either biopsy or surgical), rather than serum or any other kinds of indirect specimen were included;

5. The best quality study was retained for dealing duplicated study.

2. The standard of pathological diagnosis was not clear.

The Newcastle-Ottawa quality assessment scale of case control studies (NOS) [47] was adopted to assess the quality of included studies. It has three categories (selection, comparability, and exposure) and eight items. The quality assessment values ranged from 0 to 9 stars. Studies scored more than 6 stars was included for our analysis.

Literature were independently filtered by two authors to exclude unrelated studies. Then, full texts were independently reviewed, and controversies were solved by discussion. Data were extracted independently by two authors. The software Revman 5.3 and Stata 14.0 were applied. Results were showed with odds ratios (OR), standard mean difference (SMD) or HR (hazard ratio) with 95% confidence intervals (95% CI). Fixed-effects model was adopted for non-heterogeneous data (P > 0.1 and I2 < 50%); otherwise, random-effects model was used. If possible, heterogeneity was explored and subgroup analyses were performed.

Additionally, sensitivity analysis was performed to evaluate the influences of individual studies on the final effects size if the parameter has no less than three datasets for parameter. Otherwise, analysis based on different models was used.

Finally, publication bias was assessed by Egger’s test (P < 0.05 was considered statistically significant). If publication bias was confirmed, a trim-and-fill method developed by Duval and Tweedie was implemented to adjust for this bias. Then, we replicated the funnel plot with their ‘‘missing’’ counterparts around the adjusted summary estimates [48].

All authors disclosed no relevant relationships.

29. Cui W. The expression and clinical significance of EMMPRIN and MMP-9 in urothelial carcinoma of the bladder. ZunYi Medical University. 2010:34.

30. He HC. Relationship between the expression of CD147 and clinic pathological data in bladder cancer. Guangzhou Medical College. 2009:38.

37. Grass GD, Toole BP. How, with whom and when: an overview of CD147-mediated regulatory networks influencing matrix metalloproteinase activity. Biosci Rep. 2015;36:e283.