High-intensity focused ultrasound (HIFU) is a minimally invasive technology for cancer treatment. It uses a FUS transducer to concentrate low-energy ultrasound waves and increase the temperature above 60°C in tumor tissue causing coagulative necrosis [1]. HIFU is used to treat benign and malignant solid tumors such as uterine fibroids, pancreatic cancer, hepatic carcinoma, breast cancer, and osteosarcoma [2–6]. Focused ultrasound (FUS) has demonstrated efficacy in the treatment of pancreatic cancer [7, 8]. As a retroperitoneal organ, the pancreas is surrounded anteriorly by the gastrointestinal tract, blood vessels, and biliary tract. Pancreatic tissues contain large amounts of digestive enzymes. Animal experiments and clinical studies have confirmed that improper doses of FUS therapy can result in severe side effects such as damage to normal tissues outside the target region [9, 10]. Reduction of the FUS dose can prevent these adverse effects.

Magnetic resonance imaging (MRI) and contrast-enhanced MRI (CE-MRI) play important roles in FUS therapy efficacy evaluation and follow-up. These methods can detect tumor and ablation lesion morphology (e.g. size and contours), and perfusion defects within ablation regions. An increase in tissue injury after local heat therapy has been associated with the progression of microvascular injury [11, 12]. The effects of FUS on microvessels may extend beyond the target regions [13, 14]. Reduced FUS doses can induce apoptosis and reduce coagulation necrosis. We investigated the efficacy and the optimal period for using magnetic resonance imaging (MRI) to detect sub-threshold FUS. We compared the results with pathological data to determine whether CE-MRI was feasible for the evaluation of the early efficacy of FUS. 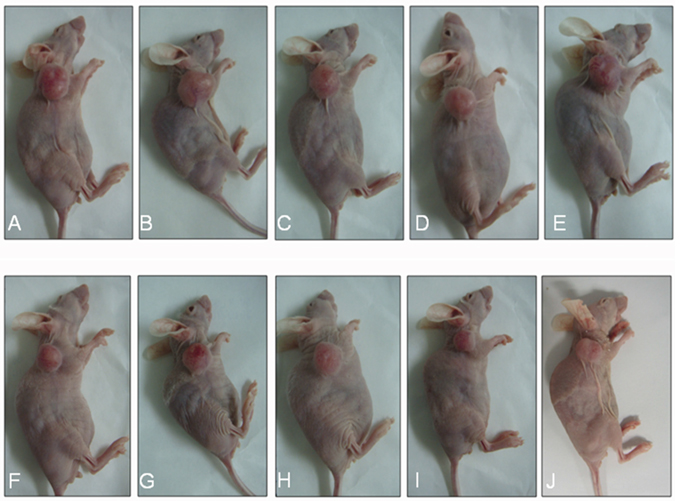 The T1WI-TSE sequence of subcutaneous pancreatic cancer xenografts in nude mice before FUS therapy displayed either a homogeneously low signal, iso-signal, or a mix of low and high signals (Figure 2A). The T1WI-SPIR sequence images of xenografts enhancement were divided into two types: those with strong signals and heterogeneous internal enhancement, and those with weak signals and enhancement at the edge of the tumors (Figure 2E). 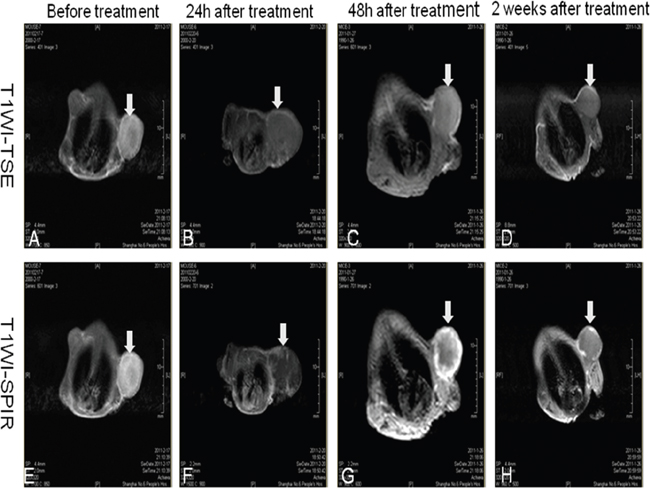 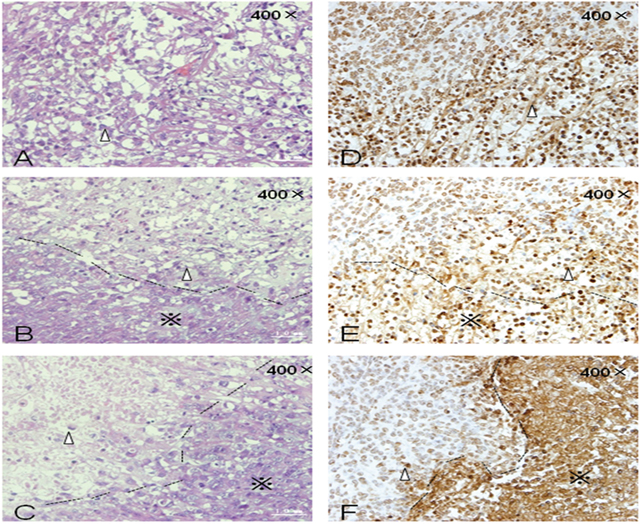 Accurate and objective evaluation of changes in lesions after FUS treatment is important for ensuring efficacy. MRI can detect changes in temperature within tissue with an accuracy of 1°C. During FUS therapy, observation of the areas heated by the focused beam using the temperature-sensitive T1WI-TSE sequence had an accuracy within 1 mm. These features can facilitate monitoring and localization by MRI during FUS treatment [15, 16]. MRI produces images with strong soft tissue resolution. MRI is also capable of multi-faceted and multi-sequence imaging. Therefore, it is advantageous for post-operative evaluation of FUS therapy. Given the pathological changes that occur after FUS therapy, evaluation of FUS efficacy using MRI and CE-MRI is better at approximately 1 week compared to immediately after treatment. Early evaluation may cause inaccurate determination of the treatment dose, leading to ineffective treatment.

Apoptosis was observed immediately following irradiation at the sub-threshold ablation temperature. The signal changes observed by MRI using the T1WI sequence were not significant compared to the signals before treatment. By using gadolinium chelates, CE-MRI can increase the imaging contrast between the untreated normal and tumor tissue and ablation lesions. Xenograft tumors demonstrated enhancement on CE-MRI before treatment. After treatment, these areas no longer demonstrated enhancement. The efficacy of FUS at the sub-threshold ablation temperature was evaluated. However, because enhancement of some xenografts is not obvious before treatment, efficacy evaluation after treatment is more difficult.

During the early phase after FUS therapy at the sub-threshold ablation temperature, CE-MRI demonstrated heterogeneous partial perfusion areas. The biological effects of FUS therapy at the sub-threshold ablation temperature were not sufficient to cause instant tissue necrosis. Tumor growth was inhibited through the induction of apoptosis. Therefore, efficacy evaluation immediately after FUS therapy may not be accurate due to possible contrast agent enhanced imaging in treatment areas. This may result in overtreatment. However, with a longer time interval after FUS therapy, ablation lesions gradually became fibrosed, absorbed, and exhibited clear boundaries. CE-MRI could better display the boundary and range of ablation lesions 2 weeks after treatment. In comparison, contrast-enhanced ultrasound may be able to evaluate the efficacy at an early stage after FUS therapy due to changes in the blood supply in the FUS target regions. In the future, we will evaluate the ability of contrast-enhanced ultrasound to assess the efficacy of FUS therapy during the early phase after treatment.

We established a subcutaneous xenograft mouse model using the PaTu 8988t human pancreatic cancer cell line derived from a liver metastasis of a primary pancreatic adenocarcinoma. This cell line was a gift from Professor Xingpeng Wang at the Shanghai First People's Hospital. PaTu 8988t cells were cultured in RPMI-1640 medium supplemented with 10% fetal bovine serum, 100 U/mL penicillin, and 100 U/mL streptomycin and maintained in a 37°C incubator with 5% CO2. Adherent cells were passaged every other day.

Twenty female BALB/c nude mice were obtained from the Chinese Academy of Sciences Shanghai Experimental Animal Center. The mice were 4–6 weeks of age and, weighed 20 ± 2.0 g. Mice were bred in SPF clean rooms at the Shanghai Sixth People's Hospital Experimental Animal Center. PaTu 8988t cells were diluted in RPMI-1640 medium and a single-cell suspension generated. The rate of living cells was > 95%. Following centrifugation, the supernatant was discarded, and the cells washed twice with PBS and resuspended in normal saline. A total of 1 × 107 PaTu 8988t cells in a 0.2 mL suspension were subcutaneously injected into the right shoulders of nude mice. Tumor size was measured every 3 days using vernier calipers. The longest diameter (L) and width (W) were recorded. Tumor volume (V) was calculated using the following equation: V = 1/2 (L × W2).

FUS treatment was performed with a HY2900 HIFU therapy system (Wuxi Haiying Techonology, Wuxi, China). The device consisted of an ultrasonic diagnostic unit under the control of a central processing unit. The 1.5 MHz therapeutic transducer (25 cm diameter, 14 cm focal length) consisted of six spherically focused elements. It was fixed on the top of a capsule filled with degassed water. The transducer was fixed on a computer-controlled, three-dimensional positioning device. Field mapping conducted at Wuxi Haiying Technology yielded an ellipsoidal focal volume with dimensions of 1.15 mm × 1.21 mm × 8.0 mm (-6 dB beam profile) based on the measurement of the field using a Tun001 hydrophone (NTR System, Inc., Onda Corp. Sunnyvale, CA, USA). Measurements were obtained at 0.64% of the maximum amplitude. Waveforms were recorded on a TDS5052 oscilloscope (Tektronix, Inc., Beaverton, OR, USA). The maximum electrical power from the amplifier to the therapy transducers was 1.02 kW. The corresponding total acoustic power of 479.2 W was measured using a Sartorius BS300 Balance (Beijing Sartorius Balance Co., Ltd, Beijing China). The spatially averaged intensity level at -6 dB was 11,340 W/cm2. All intensities shown were obtained in water.

A 3.5 MHz diagnostic transducer was positioned in the center of the therapeutic transducer to guide and monitor HIFU treatment. Tissues in the path of therapeutic ultrasound waves were visualized in diagnostic ultrasound images. The water bag had an acoustic transparent membrane bottom for HIFU to transmit without obstruction. The thermal needle (200 mm length, 1 mm outer diameter) was obtained from Haiying Electronic Medical System Co. (Wuxi, Jiangsu). The temperature-sensing point was located at the tip of the needle. MRI was performed with a Philips Achieva 3.0 T super-conductive magnetic resonance scanner (Eindhoven, Netherlands) combined with a four-channel imaging coil.

Ten tumor-bearing nude mice were anesthetized once the tumor volume reached approximately 500 mm3 with intraperitoneally injected pentobarbital sodium (50 mg/kg). Small animal protection molds were developed in-house using sound-absorbing rubber plates. Tumors could be accessed by the FUS device from the approximately 1.2 cm round hole in the mold. The top contact surfaces were coupled with ultrasonic coupling agents. The equipment is shown in Figure 4.

The highest rate of FUS-induced pancreatic cancer cell apoptosis occurred at the dose that produced the sub-threshold ablation temperature (55–60°C). Therefore, we irradiated xenograft tumors using FUS at the sub-threshold ablation temperature. Sham irradiation was performed in the control group. The treatment regimen in the FUS therapy group consisted of single irradiation for one focal point. The irradiation time (Ton) of a single point was 500 ms, the irradiation interval time (Toff) was 2000 ms, the acoustic output power (P) was 47.92 W, the distance between two points was 1 mm, and the spatial average intensity was 11,340 W/cm2. The acoustic output power in the control group was 0 W. The tip of the thermal needle was inserted into the tumor to a depth of approximately 4 mm. The tumor temperature during the FUS therapy was monitored to ensure that the highest temperature inside the tumor was < 60°C. The treatment area was a square area of 25 mm2 on the X-Y plane.

During the T1WI-SPIR sequence, 0.05 mL Gadopentetate Dimeglumine Injection Solution (Bayer, Berlin, Germany) containing 469.01 mg/mL gadopentetate dimeglumine was injected into the tail veins of nude mice followed by 1 mL of normal saline. The perfusion of the contrast agent before and after xenograft irradiation of xenografts was monitored. Mice were sacrificed 24 h, 48 h, and 2 weeks after FUS therapy (1 mouse/timepoint). Xenografts tumors were excised, fixed in 10% neutral formalin, embedded in paraffin, sectioned, stained with HE, and analyzed using TUNEL assays. The morphology and range of FUS ablation lesions in xenografts were visualized by microscopy and compared to the results of MRI and CE-MRI scans.