Materials and Methods: Fifty-nine MG patients who had undergone transsternal thymectomy were classified as low or high BMI based on the criteria for Asian-Pacific populations. An association between BMI and complications was analyzed.

Conclusions: MG patients with a BMI indicating overweight or obesity have a higher risk of postoperative complications after thymectomy. Thus, close monitoring must be performed when surgery is necessary.

Worldwide, it is estimated that 110 million children and adolescents in 2013, and 640 million adults in 2014, were overweight or obese. In 2013 about 4.5 million deaths were related to being overweight or obese [1]. Mounting evidence indicates that obesity is linked to a high risk of multiple serious conditions, including type 2 diabetes, cardiovascular disease, metabolic disturbances, and several cancers [2–7]. Considering the potential for obesity to become a global health crisis, it is not only a chronic health condition but also a disease [8].

Myasthenia gravis (MG) is a common autoimmune disorder that results from neuromuscular transmission abnormalities via several types of autoantibodies. MG is clinically characterized by muscle weakness and fatigue upon mild exertion [9–11]. The annual incidence of MG is 8–10 persons per million, and the prevalence rate is 150–250 per million [12]. The weakness may be localized or generalized, and the eye muscles are the most affected. MG can become life threatening when respiratory insufficiency occurs, due to involvement of the intercostal and diaphragmatic muscles.

Thymectomy has been shown to benefit MG patients with thymoma or thymic hyperplasia, and also in some patients with non-thymomatous MG [13–15]. However, it is noted that special attention must be paid to MG patients undergoing surgery, since administration of muscle relaxants may aggravate muscle weakness [14].

The low- and high-BMI groups were statistically comparable with regard to each clinical characteristic (Table 1).

Association between BMI and postoperative complications

Of the 59 patients, 9 (15.3%) experienced severe postoperative complications that required rescue treatment or secondary surgery: 8 with respiratory failure due to various causes, and 1 with sternal dehiscence (Table 2). Using a logistic regression model, we investigated associations between each of the clinical parameters and major adverse complications, and found that only BMI was a statistical factor (Table 3).

Considering the high incidence of PRF (13.6%) and subsequent threat to life, we further analyzed the reasons for PRF (Figure 1). Five cases were caused by postoperative myasthenic crisis, and there was one case each of pulmonary infection, bilateral pneumothorax, and pulmonary edema. The patient with pulmonary edema had a long disease history and giant tumor (17.0 cm). The high-BMI group had a significantly higher incidence of PRF compared with the low-BMI group (Table 4). Based on the receiver operating characteristic (ROC) curve, the cut-off BMI for PRF was determined to be 23.3 kg/m2. The area under the ROC curve (AUC) was 0.721 with a sensitivity of 75.0% and a specificity of 64.7% (95% CI 0.570–0.871, P < 0.05; Figure 2).

Table 4: The correlation between PRF and BMI 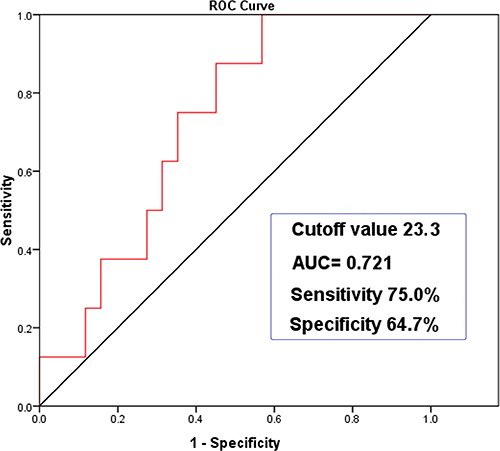 In addition to the major complications, other clinical monitoring parameters were evaluated (Table 5). These included: operative time (mean, 128 min); drainage time (mean, 4 d); total drainage volume (mean, 557 mL); and postoperative hospital stay (mean, 14 d). The postoperative hospital stay of patients in the high-BMI group was significantly longer than that of the low-BMI group (P = 0.005). Otherwise, the clinical monitoring parameters of the 2 groups were similar.

In the current study, BMI was positively associated with major postoperative complications in patients with MG after transsternal thymectomy. Of particular note, these complications included PRF, which can be fatal, and which is caused by factors such as thymoma, drugs, pneumonia, surgery, and postoperative myasthenic crisis [19–21]. In the present study, the incidence rate of PRF was significantly higher in the patients of the high-BMI group compared with the low-BMI group (P = 0.045). Postoperative myasthenic crisis has a predominant role in PRF, with an incidence of 6–34% [21–23]. Similarly, myasthenic crisis occurred in 8.5% (5/59) of our patients. Thus, special monitoring care must be planned for overweight or obese MG patients scheduled for thymectomy.

Other reasons also contribute to PRF after surgery in MG patients with high BMI. Hypoxia is a main driver of adipose tissue dysfunction in obesity [24, 25], and oxygen tension activates hypoxia inducible factor-1 (HIF-1), a key factor in the response to low oxygenation, which in turn generates a series of inflammatory responses [6, 26]. There is no doubt that both hypoxia and systemic inflammation have adverse effects on MG. In addition, obesity is generally considered a high risk factor for postoperative complications [16–18]. This may partially be due to a raised diaphragm, increased chest pressure, and impaired pulmonary function. Hypoxia of the body can also be caused by MG itself, where respiratory muscles are affected. Accordingly, it is logical that a high BMI is tightly linked with PRF, as found in the present study. Furthermore, according to the ROC curve, the optimal cutoff value of BMI for PRF was determined to be 23.3 kg/m2, with a sensitivity of 75.0% and a specificity of 64.7%.

Besides major adverse complications, the present study showed that the postoperative hospital stay of patients in the high-BMI group was significantly longer than that of the low-BMI group. That may be a result of higher complication rates in high-BMI group. However, the groups were comparable with regard to operative time, days of drainage, and total drainage volume.

Excessive weight has attracted global attention, not only for its increased incidence, but for its association with cardiovascular disease, diabetes, and many cancers [2–4]. Positive dose-response links between weight and cancer risk have been demonstrated, with ~1.2 to 1.5-fold and 1.5 to 1.8-fold higher risks for overweight and obesity, respectively [1]. High BMI indicates a poor prognosis in breast, colon, liver, and prostate cancer [8, 27–31]. Besides serving for lipid storage, adipose tissue is now recognized as an important endocrine organ [32, 33], secreting hormones such as adiponectin, leptin, interleukin (IL)-6, tumor necrosis factor α, IL-1β, and estrogen, most of which are linked to tumor proliferation, angiogenesis, invasion and metastasis [6–8]. Recent research suggests that DNA methylation changes as BMI increases [34].

There are several limitations in the present study. First, the data was retrospectively collected in a single center, and the sample size was limited. Given that, more samples and further investigation are necessary to expand on these findings in the future. Secondly, the BMI standard that is specific for Asian populations was adopted in this research, which has a lower threshold for overweight and obesity compared to the WHO classification [1, 35]. It remains unclear whether this biased the results, since theoretically, the higher the BMI, the more severe the dysfunction and chronic inflammation induced by adipose tissue. Finally, although BMI is considered a measure of adiposity, not all overweight or obese people demonstrate impairment, and some individuals with normal weight are impaired [36]. Therefore, further biomarkers are needed in addition to clinical measures.

The Ethics Committee of First Affiliated Hospital of China Medical University approved this retrospective study. The research was performed in accordance with the guidelines of the Ethics Committee, and conformed with the Declaration of Helsinki.

We conducted a retrospective analysis of the clinical data of 59 MG patients, who had undergone transsternal thymectomy at our institute from June 2011 to May 2016. Patients who had received video-assisted thoracoscopic surgery were excluded from this study, to prevent bias with regard to inflammatory response, hospital stay, and surgery-related complications [37].

MG was diagnosed based on clinical manifestations, edrophonium test, electromyography, and serum auto-antibody test [40]. Histological classification was in accordance with the revised World Health Organization (WHO), and clinical staging was based on the Masaoka system [10, 41].

38. WHO Expert Consultation. Appropriate body-mass index for Asian populations and its implications for policy and intervention strategies. Lancet. 2004; 363:157–163.