Lymph node ratio, but not the total number of examined lymph nodes or lymph node metastasis, is a predictor of overall survival for pancreatic neuroendocrine neoplasms after surgical resection

Materials and Methods: Surgically resected pNENs were assimilated from the Surveillance, Epidemiology, and End Results database. Kaplan-Meier and Cox proportional hazard models were used to examine the prognostic effect of clinicopathological characteristics on overall survival; Harrell’s concordance index was performed to assess the prognostic accuracy of all independent prognostic factors; and the Spearman’s rank correlation was used to assess the correlation between LNR and other clinicopathological characteristics.

Results: Totally, 1,273 pathologically confirmed pNENs were included in our study. The extent of ELNs failed to show any survival benefit in entire cohort (ELNs ≤ 12 vs. ELNs > 12, P = 0.072) or pNENs without lymph node metastasis (ELNs ≤ 28 vs. ELNs > 28, P = 0.108). Lymph node metastasis and LNR > 0.40 were significantly (both P < 0.001) adverse prognostic factors of overall survival. However, only LNR > 0.40 was the independent predictor of survival after adjusted for other clinicopathological characteristics. Besides LNR, the age, gender, primary tumor site, grade and stage also were the independent predictors of overall survival; and this survival model had an acceptable predictive power (Harrell’s concordance index, 0.731).

Conclusions: The current study suggested that the LNR, not the total number of ELNs and the lymph node metastasis, is an independent prognostic indicator of overall survival for pNENs after surgical resection.

Pancreatic neuroendocrine neoplasms (pNENs), also known as pancreatic endocrine tumors, islet cell neoplasms or islet cell carcinomas, are rare tumors with an annual incidence of 0.19/100,000–0.32/100,000 [1–3]. However, compared to 1973, the incidence of NENs in 2004 has increased 382% in United States [3]. Although pNENs are associated with relatively indolent physiological behavior, most patients eventually succumb to mortality due to the disease [4, 5].

However, the benefit of ELNs in pNENs is still unclear; and the role of LNR in predicting survival is contradictory. Boninsegna et al. [19] and Ricci et al. [20] proposed that LNR > 0.20 and LNR > 0.07, respectively, was the robust predictor of recurrence of pNENs. On the other hand, Murakami et al. [8] found that LNR > 0.20 did not correlate with poor overall survival (OS). These contradictory results might be attributed to the relative rarity of the samples and the cut-off values of LNR in these studies, which limited the identification of LNR in survival.

The Surveillance, Epidemiology, and End Results (SEER) database is an authoritative source of information with high-quality cancer registries, established in 1973, encompassing approximately 28% of the USA population. All the malignant cases were followed-up annually to determine the vital status. The large population and completed follow-up of SEER program can be safely speculated to represent the total USA population.

The aim of the present study was to use a large population to evaluate the predictive role of ELNs, lymph node metastasis, and LNR in OS of pNENs after surgical resection. Furthermore, we attempted to establish the correlation between LNR and clinicopathological characteristics (tumor size, grade, and stage). 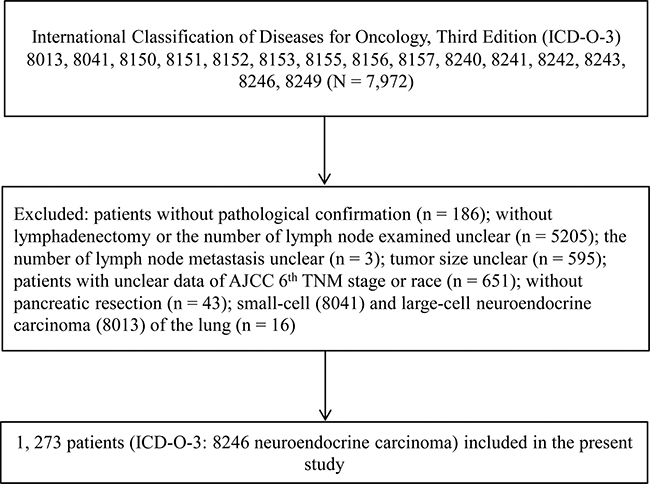 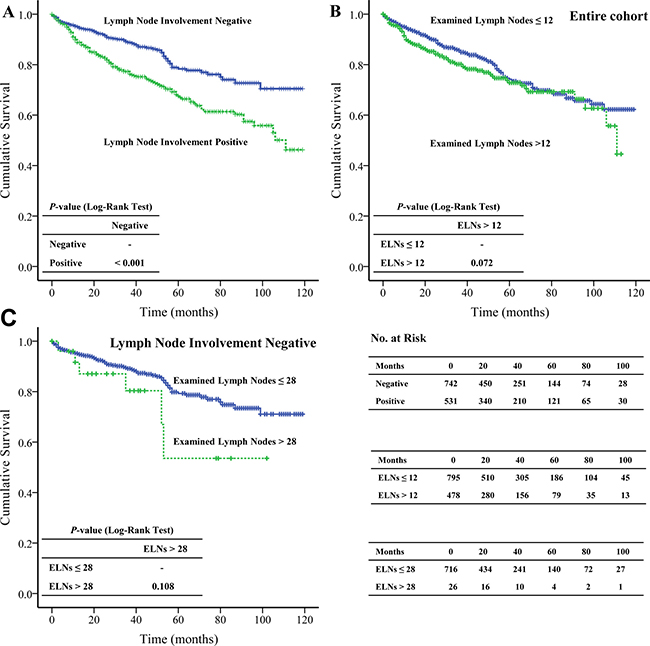 The extent of examined lymph nodes and overall survival 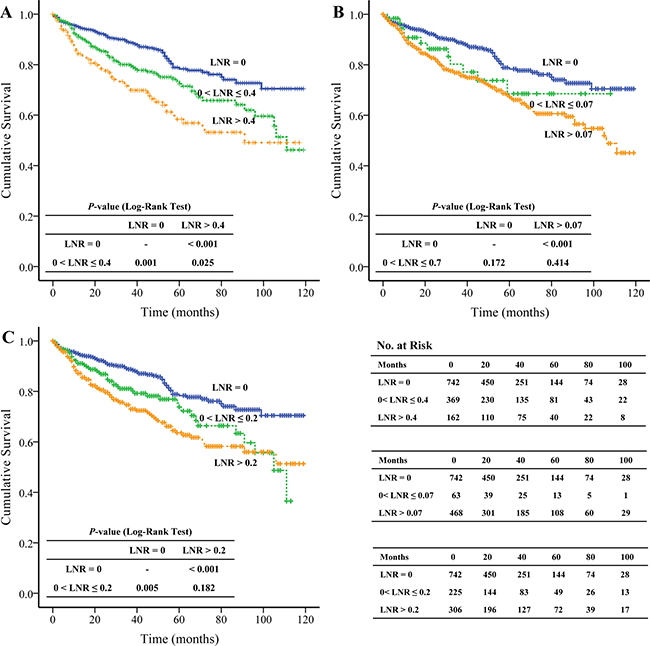 Figure 3: The Kaplan-Meier and log-rank tests of overall survival based on different cut-off values of lymph node ratio.

The LNR and clinicopathological characteristics

Currently, the AJCC and the European Neuroendocrine Tumor Society staging classification use the regional lymph node metastasis as a prognostic indicator of pNENs [21]. However, several studies proved contrary conclusions [22–25]. The conflicting results may be due to the incomplete lymphadenectomy or inadequate histopathological examination [26]. As the total number of ELNs rises, the number of metastatic lymph nodes also rises; and previous study demonstrated the number of ELNs were associated with the accuracy of lymph node staging and OS in PDAC, especially in patients without lymph node metastasis [15]. Thus, the International Study Group on Pancreatic Surgery recommended that at least 12 lymph nodes should be examined for PDAC [27].

In the present study, we only included patients underwent lymphadenectomy and the median of ELNs was 10 (IQR, 5–16). The most appropriate cut-off value of ELNs for entire cohort and pNENs without lymph node metastasis were 12 and 28, respectively. Surprisingly, we found the extent of ELNs failed to demonstrate any survival benefit in entire cohort (ELNs > 12 vs. ELNs ≤ 12) or in the negative lymph node metastasis pNENs (ELNs > 28 vs. ELNs ≤ 28). Similar to our findings, Conrad et al. [28] also demonstrated that the extent of ELNs (ELNs ≥ 10) failed to show significant survival advantage.

Recently, LNR has been demonstrated as a superior prognostic parameter than lymph node metastasis in PDAC [10, 11, 15], bladder [29], esophageal [30], and colon cancers [31]. Boninsegna et al. [19] and Ricci et al. [20] also demonstrated that LNR was an independent prognostic factor of recurrence in pNENs. However, Murakami et al. [8] reported LNR was not an independent prognostic factor of OS in pNENs.

In contrast to pNENs, several studies had demonstrated LNR > 0.2 was an independent negative prognostic factor of OS in PDAC [32, 33]. The contradictory results can notably be explained by the relatively indolent physiological behavior of pNENs. pNENs are characterized by long term survival, even if lymph node metastases are present. Thus, the low cut-off value of LNR (0.20) may limit the identification of LNR in OS.

Besides LNR > 0.40, age older than 60 years, advanced AJCC stage, and SEER grade, the multivariate Cox regressions also demonstrated that male and primary tumor located in pancreatic head were associated with poor outcome. This is probably due to that the carcinoid syndrome was more frequently in female patients; and this increased the likelihood of diagnosis and surgical treatment in the early lesions for female patients [34]. Hashim et al. [35] reported that compared to pancreas body or tail, the head was more likely associated with lymph node metastasis; and this can explain the adverse prognostic role of primary tumor located in pancreas head.

We also found that the higher LNR was positively correlated with bigger tumor size, advanced AJCC stage, and SEER grade. To our knowledge, this is the first study to investigate the correlation between LNR and clinicopathological features.

Notably, there were several limitations to our study. First, due to the constraints of the SEER database, we failed to evaluate the role of Ki-67, mitotic index, lymphovascular invasion, resection margin in OS. Second, this was a retrospective study; thus, the selection bias was inevitable.

In summary, our study demonstrated that it was LNR, not the number of ELNs or lymph node metastasis, proved to be an independent prognostic indicator. In the future, it is better to take into account the LNR for the pNENs staging classification; and further prospective study is needed to determine these findings.

The cut-off value of continuous variables

The continuous non-normal distribution variables were expressed as median and IQR, and the categorical or ordinal variables were presented as frequencies and proportions. The OS was analyzed using the Kaplan-Meier and log-rank tests and presented as mean ± standard deviation. Univariate (enter) and multivariate (forward stepwise regression) Cox proportional hazards models were used to identify the independent factors associated with OS. The Harrell’s concordance index was used to evaluate the combined predictive power of all independent prognostic factors [38]. If the value is more than 0.70, it can be concluded that the model has an acceptable discriminatory capability [39]. Spearman’s rank correlation coefficient, rs, was used to quantify the correlation between LNR and clinicopathological characteristics. rs ranged from −1 to +1, where −1 indicates a perfect negative association of ranks, zero indicates no association between ranks and +1 refers to a perfect association of ranks. All statistical analyses were performed using SPSS version 19.0 (IBM Corporation. Armonk, NY, USA). P-value ≤ 0.05 was considered statistically significant.

We thank the support of Dr. Weiguo Xu and Dr. Yumei Yan for the first version of our manuscript.

All authors declare that no conflicts of interest exits in the submission of this manuscript.

36. Niederle MB, Hackl M, Kaserer K, Niederle B. Gastroenteropancreatic neuroendocrine tumours: the current incidence and staging based on the WHO and European Neuroendocrine Tumour Society classification: an analysis based on prospectively collected parameters. Endocr Relat Cancer. 2010; 17:909–918.