Limited data is available regarding lung cancer in Chinese young adults. This study was aimed to determine the characteristics, survival, and prognostic factors of young lung cancer patients in China. We reviewed demographic and clinical data, and survival information of 420 young patients (20–45 years old) diagnosed with lung cancer in two Chinese hospitals between 2000 and 2013. The results showed that lung cancer occurred more frequently (70%) and affected more males than females (43.8% vs 26.7%) in patients older than 36; whereas, more females were affected under age 35 (16.7% vs 12.8%). Most patients had adenocarcinoma (67.6%) and stage IV disease (72.4%) at presentation. The median survival of all young patients with lung cancer was 44 months (95% CI: 39–49), of which patients with stage I–IIIA disease had a longer survival than those with stage IIIB/IV disease (101 vs 22 months, p < 0.001). No significant difference in survival was found in patients having different histological subtypes or genders. Multivariate analysis revealed that high exposure risk occupations, smoking, family history of lung cancer were risk factors of young lung cancer patients. This study provides an overview of the clinical characteristics, patterns and prognostic factors of young patients with lung cancer in China.

Lung cancer has become a serious health burden worldwide, accounting for more than one-quarter (27%) of all cancer-related deaths, with an estimated 2.2 million new cases and 1.6 million deaths per year [1]. During the past decades, the incidence and mortality of lung cancer in China are increasing sharply, with an estimated 733300 newly diagnosed cases and 610200 deaths in each year [2–4]. 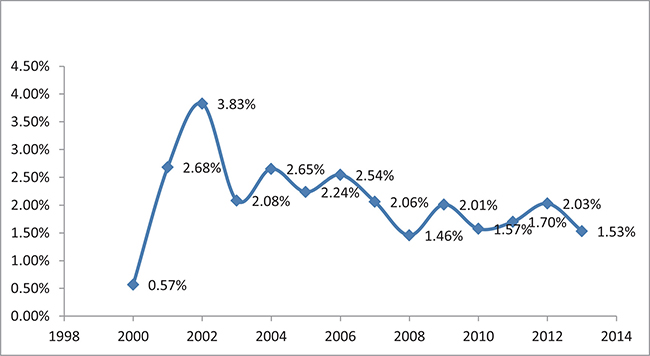 The basic characteristics of the study population were listed in Table 1. Study subjects were aged between 20 and 45 years old, with a median age of 39 years. Patients aged 36 to 40 comprised the largest subgroup (37.6%, Figure 2) while patients aged 20 to 25 years were the smallest subgroup in this cohort (9.5%, Figure 2). Most cases (70%) of young lung cancer were occurred in patients older than 36. Gender distribution showed that lung cancer affected more males than females (56.7% versus 43.3%, Table 1). Current smokers or individuals with a smoking history accounted for more than two thirds (304/420, 72.4%) of the entire group, in which most patients (58.6%) consumed 100–1000 cigarettes per year. Among these smokers, 14.8% had family history of lung cancer.

b Refers to a history of lung cancer within 3 generations. 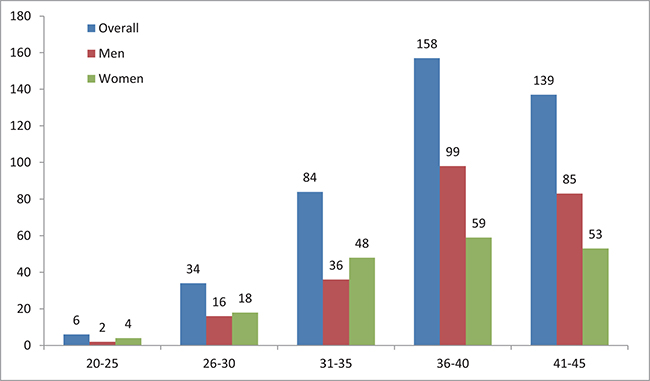 Adenocarcinoma was the most common histological type (67.6%) of young lung carcinoma, followed by small cell lung cancer (SCLC) (12.4%). Other histological types such as squamous cell carcinoma (7.4%), adeno-squamous carcinoma (3.6%), neuroendocrine carcinoma (1.4%), and unknown (7.6%) were much less common (Table 1). With respect of staging at diagnosis, most patients had stage IV disease (72.4%), followed by stage III (12.9%), while 14.8% patients had stage I or II disease. A total of 176 (41.9%) subjects were engaged in high-risk occupations that were subjected to soot, dust particles, and toxic gases exposures. 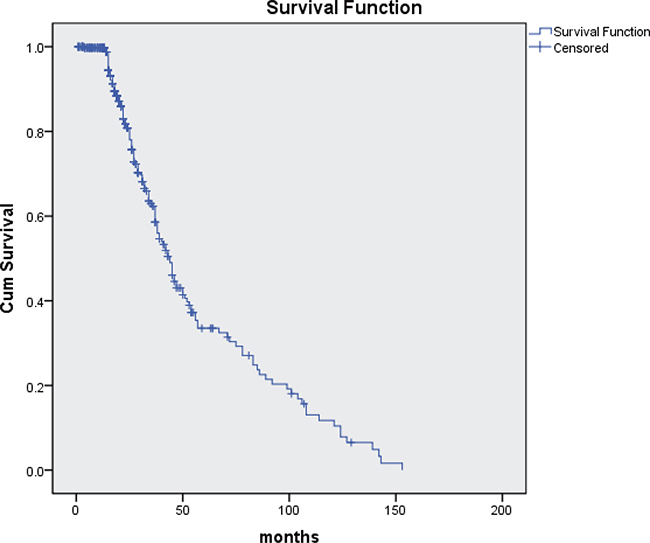 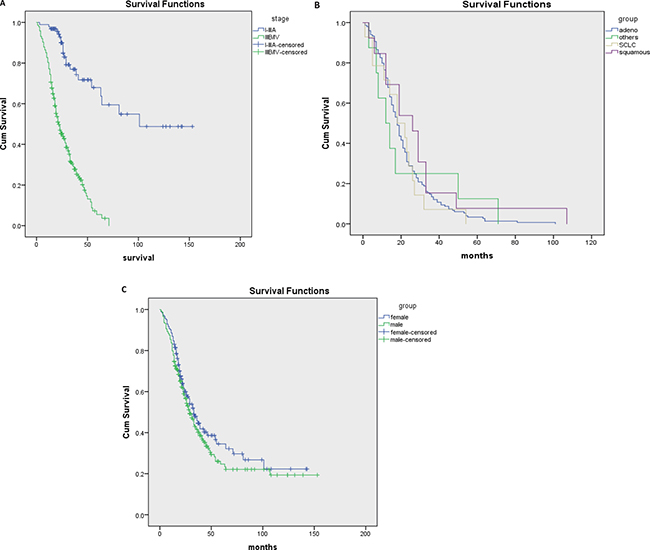 In the current study, a decreasing trend was revealed, which may be attributed to the increasing awareness of risks of smoking in China. The incidence of lung cancer increased beyond age 30 and peaked at age 36–40, which were consistent with previous studies despite various upper limitation of patients age (40, 45 or 50 years) [7, 13]. The gender distribution in our series favored male (56.7% of cases), however, a higher percentage of lung cancer in women was noted in another study [14]. In addition, women develop earlier-age-onset lung cancer compared to men [15, 16]. We also noticed this trend in our study: more women younger than 35 years develop lung cancer when compared to men (38.3% vs 23.0%). Most patients (72.4%) were current or former smokers, in which the majority of patients (58.5%) consuming 100–1000 cigarettes per year. We also noted that only 9.3% of cases had a small amount of tobacco smoked (≤ 100 cigarettes per year).

Adenocarcinoma was the most common histological type in our study, presenting 67.6% of all patients. It was also noted as the major type of lung cancers in other aged group. The smoking habits contributed to the high adenocarcinoma incidence in young lung cancer patients [17]. We tentatively believe that person with a family history of smoking or smoking habit will have a higher chance of getting lung related disease and smoking, either in an active or passive way, than person with no family history of smoking or not smoke. On the contrary, person with a family history of lung cancer would have an increased risk of developing lung disease due to genetics but might not significantly affecting life styles such as alcohol drinking and cigarette smoking habits [18, 19]. Our study found that 72.4% patients had stage IV disease at presentation while only 62 (14.8%) stage I and II diseases were recorded. Molecular alterations were seen in lung carcinomas of the young patients when compared with middle-aged and elderly patients [20]. A previous study reported a significantly higher percentage of advanced lung cancer (III/IV stages) in the young population (< 45 years) as compared with that in the elderly group (46% vs 16.6%), with stage I lung cancer rarely found in the young population [21]. Yang et al. also demonstrated that stage IIIB/IV lung cancer is more frequently seen in the population less than 50 years old than in the elderly group (72% vs 47%) [4]. One possible explanation is that lung cancer in the young population is easy to be misdiagnosed [22], suggesting more attention is needed in the diagnosis for young lung cancer patients.

Smoking status, high-risk occupations/carcinogens, and family history of lung cancer adversely affected the development of lung cancer in the young patients in the present study. Smoking status is directly associated with the development of lung cancer, a five-fold increase in risk was seen in young subjects with a smoking history more than 20 years than non-smoking population [23–25]. Familial aggregation of lung cancer was also existed [26]. Kreuzer et al. indicated a threefold increase in risk of getting lung cancer in younger subjects under 46 years if their relatives had lung cancer [27]. One possible explanation is that younger subjects were more susceptible to develop a smoking habit if family relatives smoke. We also found that 14.8% of former or current smoker in this study had family history of lung cancer. The certainty of enhanced risk for genetic susceptibility in young patient population should be explored in our future study. In addition, risk factors differed between women and men. Higher exposure to other risk factors, such as work-related air pollution or carcinogens, may result in an increased susceptibility in men [27, 28], while passive smoking and household exposure was demonstrated as important causes of the development of lung cancer in women according to recent studies [29–31].

Survival for lung cancer was strongly dependent on diagnosed age (young patients were always related with advanced disease and their survival was greater than older patients). A European study demonstrated that estimated 5-year relative survival was 18% in patients aged 15–44 years while only 6% in patients older than 75 [32]. The SEER study also reported a significantly better 5-year survival rate in the younger group compared with that in the older group (16.1% versus 13.4%, P < 0.001) [13]. However, the recruiting period of these studies were 1990–1994 and 1973–1992, respectively, while great improvements of diagnosis and treatments took place in the recent decades. In the current study, the median survival of all young patients with lung cancer was 44 months. Better survival (101 months) was seen in patients with early disease stage (I–IIIA), while only 22 months was seen in stage IIIB/IV patients. Patients with squamous cell carcinoma had a better survival although no significance of survival was found among different histological types. Several factors should be considered when interpreting these results: only 420 were enrolled in this study, the relative small sample size would induce selection bias; 14.8% of cases had stage I or II disease, which are associated with better survival [33]; in addition, young patients are more likely to receive aggressive multimodality therapy. Our study analyzed data from young population diagnosed between 2000 and 2013. During this time, some advancements of diagnosis and treatment were introduced into clinical practice. Our study reflects the clinical outcome after these advancements introduced into clinical practice.

Our study has several limitations: the results were limited by the lack of control group; the small sample size and the study population restricted to two centers would induce selection bias and referral bias to some extent. Despite increasing recognition on the importance of biomarkers, we failed to collect the biological data since biomarker analysis has not universalized in clinical practice until very recent years and our patients were from areas nationwide in which some had few access to biomarker testing, further studies are warranted for targetable driver mutations in young patients. A very recent retrospective study published on JAMA Oncology has reported that younger patients (less than 40 years old) have high frequency of targetable mutations (EGFR mutations, ALK and ROS1 translocations) [34]. However, only 81 patients in that study were less than 40 years old. Therefore, studies with larger young lung cancer patient number are needed to make the conclusions more valid, and we would like to include large scale genetic analysis of young lung cancer patients in China into our future work. Furthermore, our study did not include the interactions of all possible risk factors on young lung cancer patients, this was due to the immature electronic hospital information system at this study starts, and most of data were collected by paper-based system. Despite of these limitations, this study still holds some source value since little data is available in Chinese young lung cancer patients.

In summary, our study demonstrated a decline trend of lung cancer in young patients. The overall prognosis for lung cancer patients remains poor, with smoking, family history of lung cancer, and high-risk occupations/carcinogens were the main adverse factors. Efforts should be made on the tobacco products elimination, and the occupational protection. Family history of lung cancer was also identified as a risk factor; therefore, further studies are warranted to detect the possible underlying biological mechanism. In addition, young population deserves more studies, especially studies on searching targetable driver mutations.

Patients aged 18 to 45 years who had pathologically confirmed lung cancer were identified from prospectively maintained database in Department of Thoracic Surgery of People’s Hospital of Peking University, and Departments of Pulmonary Tumor and Respiration in the 307 Hospital Affiliated to the Academy of Military Medical Sciences between 2000 and 2013. The study protocols were approved by the Institutional Review Board of both Hospitals. Written consent was waived because only non-identifiable information was used. The majority of patients enrolled in this study were ethnically Han Chinese. Because of the minute number of patients with other ethnicities, the impacts of different susceptible genetic background could be ignored.

Smoking status was divided into current or former smoker versus never-smoker. Never-smokers were defined as individuals who report smoking less than 100 cigarettes per lifetime. Former smokers were defined as smoking cessation at least 2 years prior to diagnosis of lung cancer. Patients diagnosed before 2009 were re-staged according to the TNM classification by American Joint Committee on Cancer. High risk occupational exposure population were defined as individuals with exposure to soot, dust particles, toxic gases such as cooks, carcinogens, and miners. No family history of cancer referred to individuals who have no history of cancer within the family for three generations. First-degree relatives referred to parents, second-degree relatives to grandparents, and collateral relatives to uncles and aunts. Overall survival was defined as the time from the date of diagnosis to the date of death.

This work was supported by the 307 Hospital of PLA Innovation Fund (Youth Support Program, No. FC-2014-8).