Hepatocellular carcinoma (HCC) is one of the most aggressive malignancies and a leading cause of cancer-related mortality [1]. This may be attributed to the rising trend of chronic hepatitis B virus (HBV) and hepatitis C virus (HCV) infections and incidence of nonalcoholic fatty liver disease [2]. HCC is the most common histological type of liver cancer. After a curative hepatic resection, the overall 5-year survival for HCC remains dismal despite improvements in screening and surveillance efforts for HCC [3].

The standard treatment for small HCC is still unable to reach a consensus compared with simple surgery or simple transcatheter arterial chemoembolization (TACE), radiofrequency ablation (RFA), and surgery-based comprehensive treatment, which have remarkable advantages and significantly improved survival time and local recurrence rate, especially for patients with microvascular invasion (MVI). For example, laparotomy after partial hepatectomy, supplemented with intraoperative RFA, is a radical treatment for patients with liver cancer having severe cirrhosis. This also avoids excessive removal of normal liver tissue [4, 5]. The ability of MVI is important to guide surgical management in patients with HCC for selection of the type of hepatectomy AR(anatomical resection) or NAR (non-anatomical resection), width of surgical margins, and use of adjuvant or neoadjuvant therapy. Surgical resection with a wide margin could better eradicate MVI adjacent to the tumor, the decision to resect with a wide margin has to be made before treatment. Although postoperative supplementation with remedy TACE treatment can improve the postoperative survival time and recurrence time, it still lags behind in the progress of the tumor, with poor long-term efficacy [6, 7].

MVI is a histopathological diagnosis, although imaging techniques, such as ultrasonography, computed tomography (CT), and magnetic resonance imaging (MRI), are widely used to assess preoperative examinations of patients with HCC. However, it is difficult to effectively detect MVI, which requires to be diagnosed by postoperative histopathology. MVI more directly reflects the ability of tumor invasion and metastasis compared with morphological indicators [8]. It can represent the degree of malignancy of the tumor, and is an independent predictor of both disease-free survival (DFS) and overall survival (OS) [9]. It is vital in making reasonable surgical planning and selecting suitable treatment options for postoperative patients [10]. A study by Jang reported that the recurrence rate for patients with MVI was higher compared with the rate in those without MVI, and the recurrence time was earlier [11]. Therefore, an accurate preoperative prediction of the MVI status is critical to the choice of HCC therapy for impeding recurrence and improving the outcome.

Chronic inflammatory response has already been considered as the main cause of HCC, such as of HBV and HCV. In this study, chronic hepatitis (especially HBV infection) was the most common cause of HCC. A decade ago, some clinical medical institutions were already aware of the predictive value of systemic inflammatory response in the outcome of patients undergoing resection for HCC [12]. Both neutrophils and lymphocytes were the most important part of white blood cells in systemic inflammatory response and recognized as key participators in metastasis based on increasing evidence [13–15]. Neutrophil-to-lymphocyte ratio (NLR), platelet-to-lymphocyte ratio (PLR), and aspartate aminotransferase/platelet count ratio index (APRI) were convenient markers for predicting poor prognosis for HCC [16, 17]. Whether NLR, PLR, or APRI can predict the MVI of HCC is still unknown. Therefore, a retrospective analysis of the predictive value of preoperative NLR and possible clinical parameters to MVI in patients with HCC was performed in this study.

Table 1: Univariate and multivariate analysis of clinicopathologic variables in relation to DFS and OS after curative operation

Table 3: Univariate analysis of clinical characteristics according to microvascular invasion 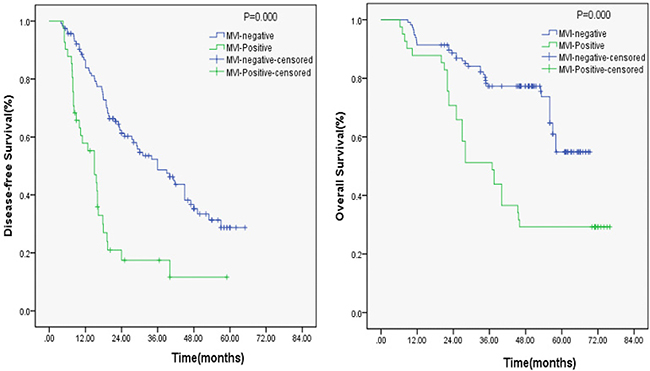 Figure 1: Kaplan-Meier curve for DFS and OS of patients with HCC by MVI-positive vs MVI-negative; MVI-positive is associated with Early recurrence (P = 0.000).

Determination of the cut-off values 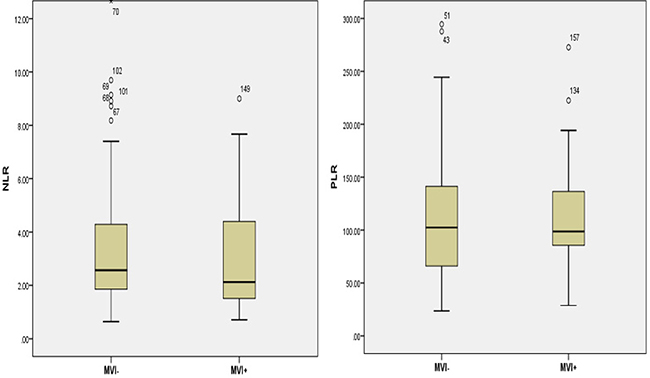 Figure 2: Distributions of NLR A. and PLR B. between MVI+ and MVI−.

Preoperative NLR, PLR, APRI, and clinical parameters of HCCs with and without MVI 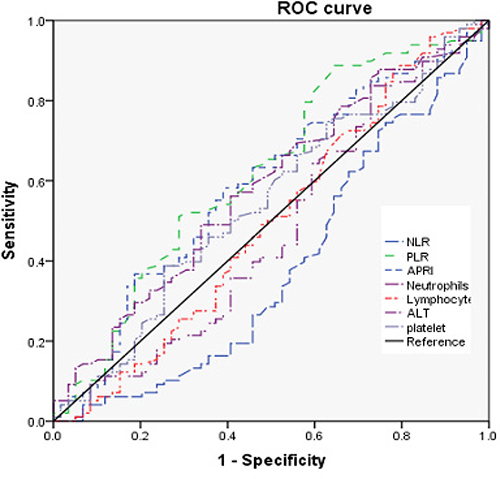 Table 4: Results of the clinicopathological for HCC with MVI-Positive by multivariate logistic analyses

The present study demonstrated that NLR and MVI were closely related (P = 0.045), and 84.7% (113/157) patients were infected with HBV and HCV, consistent with many previous studies. Chronic inflammation was correlated with the occurrence and development of HCC [21, 22]. Neutrophils maintain the tumor microenvironment, exert protumoral functions, and enhance tumor cell invasion and metastasis, angiogenesis, and extracellular matrix remodeling in cancers [13], such as colorectal cancer, pancreatic carcinoma, and lung cancer, an thus are important in tumorigenesis and progression [23, 24]. Studies have shown that neutrophils are crucial in tumor development and metastatic progression [14, 25]. Catharina Hagerlinga and Zena Werba clarified that neutrophils create a mutagenic environment capable of initiating and promoting tumor development [26]. Therefore, it could be concluded that neutrophils might mediate MVI.

AFP is a common serum marker for tumor. It is the most useful single biomarker for diagnosing HCC [27, 28] and gynecological tumors [29]. The usefulness of AFP as a biomarker for detecting HCC was examined based on previous studies, demonstrating that elevated levels of AFP in patients with HCC was a risk factor for the development of HCC [30]. Data in the present study indicated that AFP (P = 0.001) was an independent predictive indicator of MVI, consistent with many previous studies [31]. Therefore, AFP might be a promising, noninvasive, MVI-associated biomarker for HCC.

This study had some limitations. First, it was a retrospective, hospital-based, single-institution, and not a population-based, study. However, this limitation was outweighed by its strength. No ascertaining bias was introduced for misdiagnosis because all patients had both pathologically and clinically confirmed MVI and HCC. Second, the loss of information on some quantifiable factors and the small size of patients did not allow the estimation of the magnitude of HCC risk for MVI associated with these factors. Although this study had a relatively small sample size, the incidence of MVI was high in HCC after operation, and given that this was the major focus of this study, the sample size was probably adequate.

In conclusion, this study showed that MVI was an independent predictor of DFS in patients with HCC who underwent a curative resection. NLR and AFP could be used as a convenient, reliable, and economical predictive means to distinguish between patients with and without MVI in HCC, which can be useful for further planning of comprehensive treatment.

This study was approved by the Clinical Ethics Committee of Chifeng, Inner Mongolia Medical University. The patients’ data were analyzed anonymously because written consent was not obtained from all participants.

A total of 157 patients who had undergone a primary attempt of curative resection for HCC were included in this study. All participants were enrolled from Chifeng Municipal Hospital, Inner Mongolia Medical University institute of clinical from February 2010 to December 2014. There is Exclusion criteria included: presence of extrahepatic malignancy and previously treated for any type of malignancy before HCC was diagnosed;existing second malignancy;all other conditions with elevated AFP rather than liver disease. All diagnoses were confirmed by pathological examination. All surgical specimens were evaluated pathologically to determine the extent of tumor differentiation, MVI, and surgical margins following surgery.

Microscopic vascular invasion was diagnosed by the presence of clusters of cancer cells floating in the vascular space fine by endothelial cells on histopathologic examination of the resected specimen. Surgical specimens were collected and evaluated by hematoxylin and eosin (HE). A biochemical examination of blood, including a complete blood count, was generally performed 3–7 days before surgery. According to the previous studies, the preoperative NLR, PLR, and APRI were calculated as follows: preoperative NLR = the neutrophil count/lymphocyte count, preoperative PLR = platelet count/lymphocyte count, and preoperative APRI = aspartate aminotransferase count/platelet count.

Radical resection was defined as complete tumor clearance both macroscopically and histologically. All patients were followed up by telephone or as outpatient. Within 2 years after surgery, regular monitoring of serum (AFP, CEA, CA199), liver function every 3 months, liver ultrasound, and chest x-ray investigations were performed, besides contrast CT and/or MRI every 6 months, when suspected for tumor recurrence or metastasis. Tumor recurrence was defined by clinical, radiological diagnosis. Intrahepatic recurrence or metastasis was determined by two imaging examinations with typical performance. The DFS was the time of operation to patients with tumor recurrence time. OS was the time of operation to the patient’s death or the last follow-up time. Remedial treatments were selected, including reoperation, TACE, RFA, sorafenib, and radiotherapy, when the recurrence was determined.

Statistical analysis was performed using the SPSS 20.0 statistical software (SPSS, IL, USA). A P value < 0.05 was considered statistically significant. The Mann–Whitney U-test and a box plot were used to describe the normality of each continuous parameter’s distribution. Quantitative values were reported in the form of means ± standard deviation. Associations between clinical and histopathological parameters with OS, DFS, and MVI were analyzed using the Kaplan–Meier curves and compared using the log-rank test. Univariate and multivariate Cox regression analyses were performed to determine the effects of possible prognostic factors on MVI after curative operation. HRs estimated from the Cox analysis were shown as relative risks with corresponding 95% CIs. The ROC curve was used to estimate the performance of NLR, PLR, and APRI. The χ2 test was used for the univariate analysis of MVI. Associations between clinical and histopathological parameters with MVI were evaluated by both univariate and multivariate logistic regression analyses.

There is no funding