Although the death rate of gastric cancer has declined for several decades, epidemiological data from the American Association of Cancer suggest that gastric cancer is the fourth and fifth most common cancer in men and women, respectively, and it remains a major public health problem worldwide [1, 2]. As the mortality rate of gastric cancer remains high, a specific prevention strategy is urgently needed.

The occurrence of gastric cancer involves a multi-factorial (Helicobacter pylori infection, dietary factors, smoking, family history of cancer), multi-stage developmental process; the exact cause of the disease is still not fully understood [3, 4]. Lifestyle habits and diet may play key roles in the etiology of gastric cancer [5, 6]. Many studies have shown that alcohol consumption affects gastric cancer cell proliferation and cell cycle distribution and apoptosis [7–9]. The results of a meta-analyses published in 2012 [10] suggested a slight association between alcohol consumption and gastric cancer risk [11–24], although the authors did not evaluate the quality of the articles or classify them. In recent decades, numerous prospective cohort studies have investigated the association between alcohol consumption and gastric cancer [25–33]. The results from these studies were inconsistent; therefore, a comprehensive meta-analysis is necessary.

To explore the relationship between gastric cancer incidence and alcohol consumption and to provide a scientific basis for gastric cancer prevention, we conducted a meta-analysis of the evidence across all prospective cohort studies published in 1987–2016.

Figure 1 depicts the study selection process; we initially reviewed 85 potentially relevant records, and an eventual 23 articles, involving 5,886,792 subjects, that met the inclusion criteria were included in the meta-analysis (Supplementary Table 1). We subsequently excluded 62 studies because they used combined intervention, were duplicate reports or studies, or their endpoints were not relevant. Among the 23 included articles, five had been conducted in Japan, four had been conducted in Korea, and three had been conducted in the USA and other countries (Brazil, Lithuania, the Netherlands, Norway, Denmark). Fourteen and nine studies had an impact factor of > 3 and ≤ 3, respectively. Seven, 13, and three studies had a NOS (Newcastle–Ottawa Quality Assessment Scale) score of 8, 7, and 6, respectively. We used the risk estimate that was the most representative of the most commonly consumed alcohol. 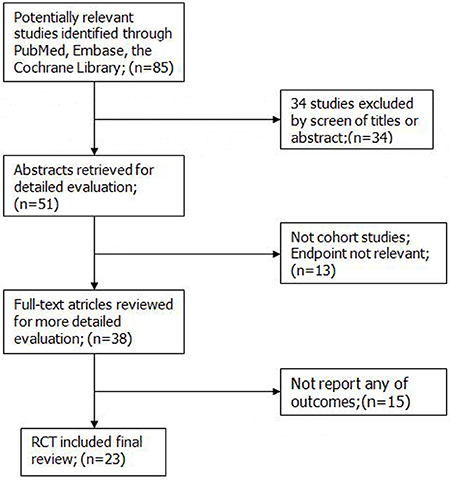 We generated forest plots for alcohol consumption and gastric cancer. The results from the 23 studies were inconsistent: two studies reported that alcohol consumption was associated with significantly reduced gastric cancer risk, and six studies reported no association; however, 15 studies reported significantly increased gastric cancer risk. Analysis of the 23 studies yielded a combined risk estimate of 1.17 (95% confidence interval (CI), 1.00–1.34; p < 0.05) with a heterogeneity value (I2) of 79.6% (Figure 2). We conducted sensitivity analysis (Figure 3) and meta-regulation testing (Figure 4). As the figure shows, the results showed that the omission of any study did not alter the observed effect, which revealed that the publication dates were similar. Geographic area was associated with ~53.7% heterogeneity reduction across the studies. 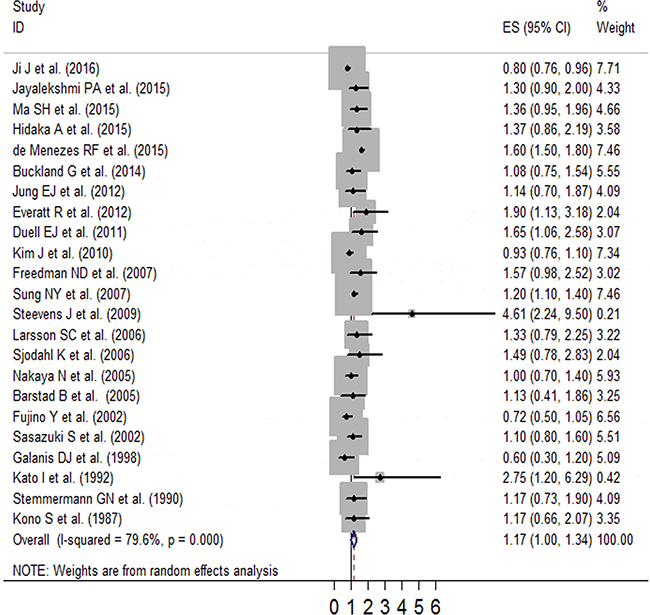 Figure 2: Forest plot of RR (with 95% CI) examining the association between alcohol intake and gastric cancer risk in a random-effects model. 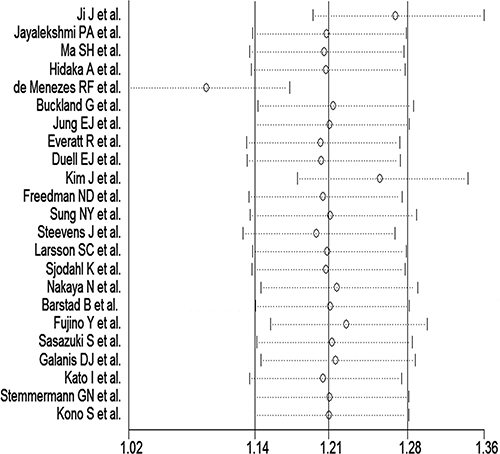 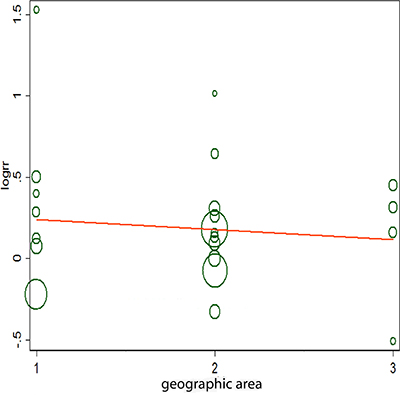 As the studies differed in terms of geographic area (Asia, America, Europe), sex (female or male), impact factor (> 3 or ≤ 3), and NOS score (6/7/8), we conducted subgroup analyses to determine the effect of these factors on our analyses (Table 1). We obtained a statistically significant protective effect of alcohol consumption (relative risk [RR]: 0.85; 95% CI: 0.76–0.95) in Europe, and a statistically significant harmful effect of alcohol consumption in the studies that adjusted for age, education level, smoking status, and body mass index (BMI), studies with NOS scores of 8, impact factor > 3, and in men and in Americans. 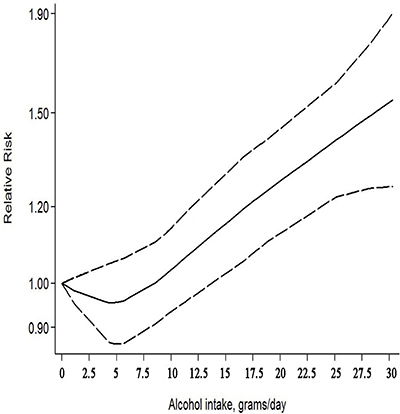 The Egger and Begg regression models [34] revealed no evidence of publication bias (Figures 6 and 7) with regard to the consumption of alcohol in relation to gastric cancer risk. The Egger funnel plot and Egger linear regression test yielded p > 0.05 and p > 0.05, respectively. 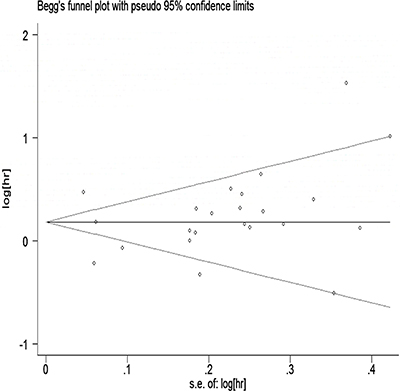 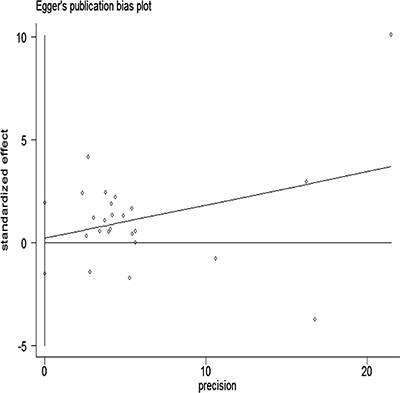 Meta-analysis is a method of summarizing the results of the same research purpose and comprehensively evaluating its combined effect. It can be objective, systematic, comprehensive, qualitative, and quantitative statistical analysis [35]. Considering consistency, meta-analysis can be used to combine all available information, the range of total odds ratio (OR) values obtained by convergence, resolve inconsistent or even mutually contradictory original research results. It has functions that improve estimates of effect, construct a general review method for omitting inadequate study conclusions, and reinforce the effectiveness of statistical results to yield more comprehensive and reliable study results that are more representative of the general population.

The limitations of the present meta-analysis should be noted. Only studies written in English were included; studies that were not written in English would have been overlooked. In our meta-analysis, there was heterogeneity across the studies, and regulation testing showed that geographical area was associated with ~53.7% reduction in heterogeneity across the studies. We did not have information on wine variety classification; as wine varieties might differ between regions, the results would also have differed. Furthermore, heterogeneity among studies was allowed to account for the use of the random-effects model. Meta-analysis is an observational study, and bias in the design, data collection, and statistical analysis of a meta-analysis is unavoidable; accordingly, the quality of the data is used to evaluate and decide if here will be bias.

Our meta-analysis had several strengths. To improve the statistical power, we included several studies, all of which were prospective cohort studies. This design minimizes selection and recall bias.

In conclusion, our meta-analysis reveals a negative association between alcohol consumption and gastric cancer risk, with an RR value of 1.17 (95% CI: 1.00–1.34, p < 0.05 and an I2 value of 79.6%. Due to the limitations mentioned above, more high-quality cohort studies are required to strengthen the findings.

We updated the systematic literature review published in 2012 [10]. We used the PubMed (http://www.ncbi.nlm.nih.gov/pubmed/), Embase (http://www.embase.com/), Web of Science (http://wokinfo.com/), and Cochrane Library (http://www.thecochranelibrary.com/) databases to identify articles using the terms “alcohol beverages/consumption/drinking” and “gastric/stomach cancer/neoplasms/tumor/malignancy”. In addition, we reviewed the reference lists of the 23 included studies to identify additional studies. The language of the studies was limited to English, and we did not search for unpublished studies. In addition to the reference lists of the included studies, we also searched those listed in the Meta-analysis Of Observational Studies in Epidemiology guidelines [41, 42]. We followed standard criteria for conducting and reporting the meta-analysis [43].

We included prospective cohorts of alcohol consumption and gastric cancer incidence. The inclusion criteria were: (1) a prospective cohort design; (2) investigation of the association between alcohol consumption and gastric cancer incidence; (3) reported the OR or RR with 95% CI; and (4) prospective cohort studies. For the dose–response analysis, a quantitative measure of intake had to be provided. When there were several publications from the same study, we selected the publication with the largest number of cases and the longest study period.

From each study, we extracted the first author’s last name, year of publication, country in which the study was conducted, age, duration, number of cases, exposure range, adjusted OR, RR, or hazard ratio (HR) with the 95% CI and adjustments, NOS score, and impact factor (Supplementary Table 1). The RR was used as the common measure of association across studies, and the OR and HR were directly considered the RR. We used Q and I2 statistics to estimate heterogeneity among the studies; disagreements were resolved by discussion. Two authors assessed the methodological quality of the included studies independently using the NOS.

The association between alcohol consumption and gastric cancer risk was assessed using the RR. We used Q (p ≤ 0.10) and I2 statistics to examine heterogeneity across the studies and used the random-effects model when substantial heterogeneity was detected [44]. Subgroup analyses were conducted on adjustment for age, sex, education level, smoking status, family history of gastric cancer, BMI, NOS score, impact factor, sex distribution of the study population, and geographic region. Additionally, we investigated the effect of a single study on the overall risk estimate (Figure 3). This allowed us to determine whether a single study could have affected the results significantly.

The authors report no conflicts of interests. We confirm that none of the authors are related to authors of studies included in the meta-analysis.

4. Baroudi O, Benammar-Elgaaied A. Involvement of genetic factors and lifestyle on the occurrence of colorectal and gastric cancer. Crit Rev Oncol Hematol. 2016; 107:72–81.

21. Galanis DJ, Kolonel LN, Lee J, Nomura A. Intakes of selected foods and beverages and the incidence of gastric cancer among the Japanese residents of Hawaii: a prospective study. Int J Epidemiol. 1998; 27:173–180.