Human Homeobox A transcript at the distal tip (HOTTIP) is a putative oncogene in solid tumors. We performed a meta-analysis to investigate the association between HOTTIP expression and clinical outcomes in cancer patients. Eligible studies were collected from a literature search of the online electronic databases of Embase, Web of Science, PubMed and the China National Knowledge Infrastructure (up to January 2, 2017). Fixed-effects models were used to compute pooled odds ratios (ORs) and hazard ratios (HRs). In total, we analyzed nine studies that included 800 patients with seven tumor types. Overall survival was lower for patients with high HOTTIP expression than for those with low expression (HR = 2.30, 95% confidence interval [CI]: 1.81–2.91, P < 0.001). High HOTTIP expression was also associated with lymph node metastasis (OR = 2.40, 95% CI: 1.70–3.37, P < 0.001), distant metastasis (OR = 3.30, 95% CI: 1.78–6.12, P < 0.001), poor tumor differentiation (OR = 1.55, 95% CI: 1.03–2.32, P = 0.036) and a poor clinical stage (OR = 3.28, 95% CI: 2.22–4.83, P < 0.001). This meta-analysis demonstrated that high HOTTIP expression in cancer patients is associated with poor clinical outcomes. Thus, HOTTIP is a potential predictive biomarker of cancer.

Cancer is a major health problem all over the world, as the second leading and leading cause of death in the US and China, respectively [1, 2]. Although diagnostic and treatment modalities have been developed for decades, the average five-year survival rate for cancer patients is still very low. The main reasons for the high cancer mortality rate are the lack of effective detection methods at early stages and the high recurrence rate. Therefore, the study of diagnostic and prognostic markers in cancer patients has major clinical significance.

Long noncoding RNAs (lncRNAs) are RNA molecules ranging from 200 nucleotides to 100 kilobases in length, without protein-coding abilities [3, 4]. LncRNAs are deregulated in a variety of diseases, including cancer [5–8]. These differentially expressed RNAs participate in various regular biological processes at the transcriptional and posttranscriptional levels [5]. LncRNAs can regulate gene expression through multiple approaches, such as by recruiting transcription factors or directly binding to proteins, RNA and DNA [5]. Many lncRNAs have been reported to participate in tumorigenesis, tumor progression and cancer prognosis [9–12].

Homeobox A transcript at the distal tip (HOTTIP) is a 3,764-nucleotide-long lncRNA encoded by a gene at the 5’ end of the HOXA cluster (chromosome 7p15.2) [4]. HOTTIP is upregulated in various carcinomas, such as lung carcinoma [13], gastric carcinoma (GC) [9], pancreatic carcinoma [11], hepatocellular carcinoma (HCC) [8] and squamous cell carcinoma [14]. In addition, HOTTIP levels have been associated with tumor pathological characteristics and patient prognostic outcomes [10–14]. These findings suggest that HOTTIP could be developed as a potential diagnostic and prognostic biomarker for human cancers. However, individual studies may be inaccurate or inadequate due to limitations of the sample sizes or research programs. Therefore, in this study, we collected all relevant publications and conducted a meta-analysis to explore the relationship between HOTTIP expression and cancer clinical outcomes, and to determine the potential of HOTTIP as a common predictive biomarker for metastasis and prognosis in cancer patients.

Our initial search retrieved 327 potentially relevant papers from Embase, Web of Science, PubMed and the China National Knowledge Infrastructure (CNKI). Following the removal of duplicates, 290 records were preserved. After the titles and abstracts were screened, 39 full-text articles remained. However, 30 of them were excluded due to incomplete data. Ultimately, nine studies met the eligibility criteria and were included in the meta-analysis [8–12, 13, 15–17]. A flow diagram of the study selection process is shown in Figure 1. 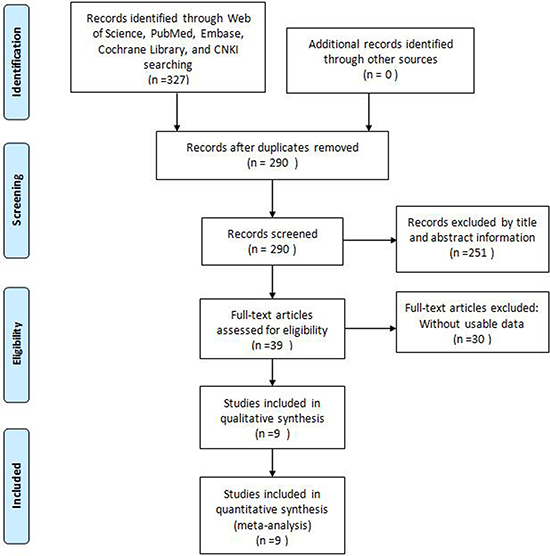 Figure 1: Flow diagram of the literature search and selection.

In total, 800 patients were included in this study. Eight studies came from China and one came from Switzerland. Cancers of seven carcinoma types were included in our study: HCC, osteosarcoma (OSA), colorectal cancer (CRC), pancreatic cancer (PC), GC, tongue squamous cell carcinoma (TSCC) and breast cancer (BC). In all of the studies, lncRNA HOTTIP expression was detected by quantitative reverse transcription PCR (qRT-PCR). The main features of the nine studies that qualified for the present meta-analysis are summarized in Table 1.

The relationship between HOTTIP expression and overall survival (OS) was evaluated in eight studies including 752 patients. No significant heterogeneity was observed among the studies (I2 = 0%, P = 0.922), so a fixed-effects model was used to pool the results. The pooled HR indicated that HOTTIP expression was negatively associated with OS (HR = 2.30, 95% confidence interval [CI]: 1.81–2.91, P < 0.001, fixed-effects model) (Figure 2). To evaluate the robustness of the merged results, we conducted a sensitivity analysis by successively omitting each individual study. The results were not significantly affected by the exclusion of any individual study, indicating that the results of this meta-analysis were robust (Figure 3). 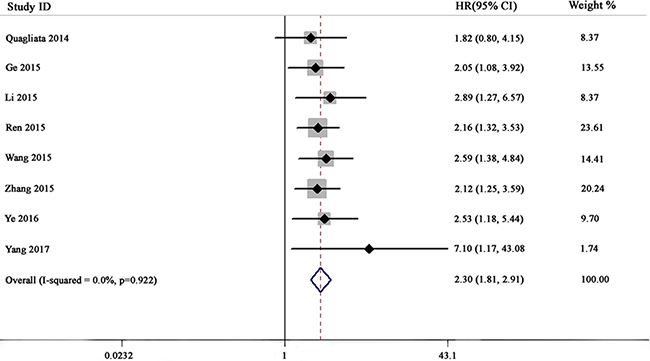 Figure 2: Forest plot for the relationship between HOTTIP expression and OS. 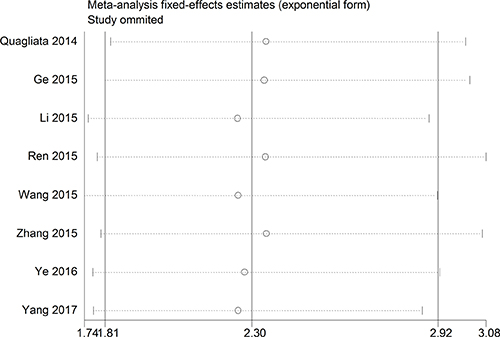 Figure 3: Sensitivity analysis for the meta-analysis.

Six articles encompassing 632 patients evaluated lymph node metastasis (LNM) according to lncRNA HOTTIP expression. There was no significant heterogeneity among these studies (I2 = 0%, P = 0.964). Subsequently, a fixed-effects model was adopted to analyze the data (Figure 4, Table 2). The odds ratio (OR) of LNM for the high HOTTIP expression group versus the low expression group was 2.40 (95% CI: 1.70–3.37, P < 0.001). 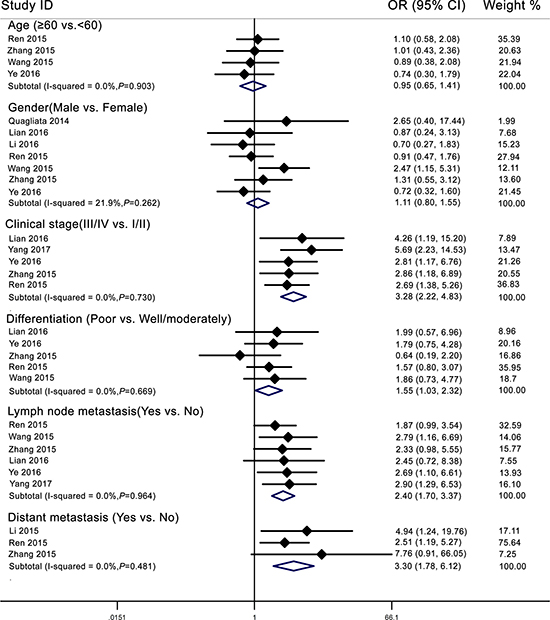 Figure 4: Forest plot for the relationship between HOTTIP expression and clinicopathological parameters.

Table 2: Meta-analysis results on the association of increased HOTTIP expression with clinicopathological parameters 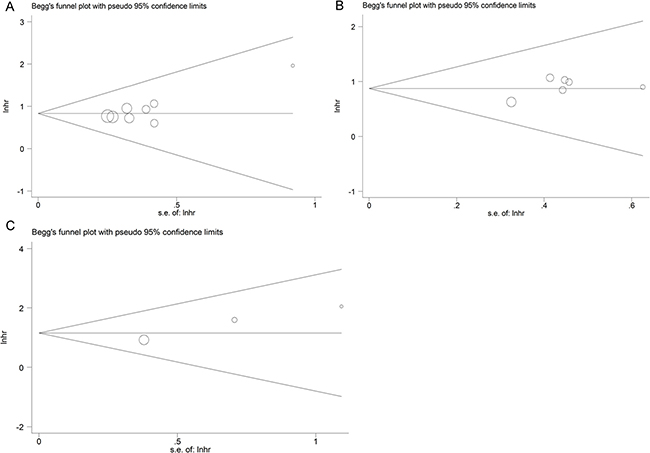 HOTTIP is a 3,764-nucleotide-long lncRNA encoded by a gene at the homeobox A (HOXA) locus [4]. HOTTIP recruits histone-modifying enzymes to activate HOX gene transcription and inhibit tumor-suppressor gene expression [4, 18]. Therefore, HOTTIP has been considered as a carcinogenic factor, and overexpression of HOTTIP has been reported to promote tumor growth [13, 18]. We conducted this comprehensive meta-analysis to evaluate the relationship of lncRNA HOTTIP expression with prognostic results and clinicopathological parameters in cancer patients.

Nine eligible studies met the selection requirements of this meta-analysis. The data from tumor patients were processed according to OS, age, gender, clinical stage, differentiation, LNM and DM. Our results suggested that cancer patients with high HOTTIP expression in tumor tissues were more likely to exhibit poor tumor differentiation, a poor clinical stage, LNM and DM than patients with low HOTTIP expression. In addition, we found that increased HOTTIP levels were significantly and negatively associated with shorter OS times in tumor patients. Sensitivity analysis indicated that no single study impacted the overall results, suggesting that the pooled results were robust. Furthermore, no obvious publication bias or heterogeneity was observed among our included studies.

Many studies have demonstrated that HOTTIP may be an oncogenic lncRNA. HOTTIP was reported to influence HCC cell proliferation [8]. Knockdown of HOTTIP reduced HOXA13 expression, and knockdown of HOXA13 also reduced HOTTIP expression in HCC-derived cell lines [8]. Tsang and colleagues [19] found that downregulation of HOTTIP markedly reduced the expression of numerous HOXA genes and weakened liver cancer growth and metastasis both in vivo and in vitro. HOTTIP also was shown to be upregulated in human pancreatic ductal adenocarcinoma tissues and to promote pancreatic ductal adenocarcinoma cell proliferation, migration, invasion and resistance by regulating HOXA13 [20]. However, another study in pancreatic cancer cells demonstrated that HOTTIP did not modulate HOXA13 expression, but did regulate the expression of other HOX genes such as HOXA1, HOXA9, HOXA10, HOXA11 and HOXB2 [21]. In addition, Lian and coworkers [12] found that HOTTIP promoted CRC cell growth by silencing p21 expression. Furthermore, HOTTIP was reported to inhibit cell apoptosis and promote the progression of prostate cancer and lung cancer [13, 22]. These results may illustrate why high HOTTIP expression was significantly associated with a poor prognosis in cancer patients in this meta-analysis.

There are some limitations that should be noted for the current study. Firstly, most of the included cancer patients were from Chinese populations. Thus, our results need to be confirmed with more clinical data from other ethnic groups. Secondly, some HRs and their corresponding 95% CIs were extracted from Kaplan-Meier curves, and may have been less reliable than those obtained directly from articles. Thirdly, the number of original studies included in this meta-analysis was small. Fourthly, studies with positive results are more likely to be published than those with negative results. Thus, as a literature-based analysis, this study may have overestimated the association between high HOTTIP expression and clinical outcomes. Finally, many other factors may also influence OS, such as gender, age and treatment. Thus, the results of our meta-analysis should be confirmed in future studies.

In conclusion, our meta-analysis suggests that the upregulation of HOTTIP is a risk factor for poor clinical outcomes in diverse cancers, and could serve as a potential prognostic biomarker. Nevertheless, given the limitations described above, well-designed studies of particular carcinoma types and large sample sizes are needed to confirm the clinical utility of HOTTIP.

We conducted a literature search in the online electronic databases of Embase, Web of Science, PubMed and CNKI (up to January 2, 2017). The search keywords and their combinations were: “HOTTIP OR Homeobox A transcript at the distal tip” AND “cancer OR carcinoma OR tumor OR tumour OR neoplasm”. Only English and Chinese articles were included in this study.

The inclusion criteria of this meta-analysis were: (1) research on the association between HOTTIP and cancer prognosis, (2) division of patients into two groups: high or low HOTTIP expression, and (3) sufficient data for the computation of ORs or HRs with 95% CIs. The exclusion criteria for our meta-analysis were: (1) duplicate articles, (2) case reports, letters, expert opinions, editorials and reviews, and (3) studies without available data.

Two investigators (Wei Li and Xinmei Kang) extracted and reviewed the data from the eligible studies independently. Another researcher (Ke Shi) resolved any disagreements. The collected data were as follows: first author’s name, publication date, study region, tumor type, tumor stage, detection method for HOTTIP expression, criteria for high HOTTIP expression, sample size, total patient number, number of patients in the high HOTTIP and low HOTTIP groups, number of patients with LNM and DM in each group, survival analysis, follow-up period, HR and corresponding 95% CI. If the survival data were not shown directly in the article, Engauge Digitizer v.4.1 software was used to obtain them from the Kaplan-Meier curve, as previously described [23].

STATA 12.0 software (Stata, College Station, Texas) was used to perform all statistical analyses in this study. Patients were separated into the high and low HOTTIP expression groups according to the original published articles. The heterogeneity among the included studies was judged with the Q-statistic test and the chi-squared test. A “Begg’s funnel plot” was used to determine the potential publication bias. A fixed-effects model was used to analyze the pooled results when the included studies did not exhibit significant heterogeneity (P > 0.1); otherwise, a random-effects model was employed (P < 0.1). A sensitivity analysis was conducted to evaluate the robustness of the overall results. All P-values were determined with a two-tailed test, and P < 0.05 was regarded as statistically significant.

This work was supported by funding from the Key Program of Hunan Province Science and Technology Hall (2015SK20662).