Nasopharyngeal carcinoma (NPC) is primarily found in the nasopharynx. As one of the world regions with highest incidence rates for this disease, south China has a standardized incidence rate of 20–30/100 000 [1, 2]. Non-keratinizing carcinoma (WHO 2005 classification), especially the undifferentiated type of Non-keratinizing carcinoma [3], is the major pathological type in regions with high incidence, and has better sensitivity to chemoradiotherapy. Oncogenes and tumor suppressor genes are involved in tumorigenesis and development, while DNA repair genes are involved in drug resistance [4–6]. Expression level of these protein should be considered to predict treatment responses and prognoses in NPC patients besides pathological type, clinical staging, and chemoradiotherapy. Therefore, understanding the underlying intrinsic factors would help predict the prognosis and select optimal treatments.

The Ki67 protein is closely related to mitosis and reflects the proliferation activity of malignant tumors [7], while indicating the development and prognosis of various malignant tumors such as breast, lung, urinary tract, and cervical cancers [8–11]. As an independent prognostic indicator, it is conventionally applied in the molecular classification and treatment strategies of breast cancer [12]. Regarding head and neck cancer, high expression of Ki67 affects the treatment response of oral squamous cell carcinoma [13] with high risk of recurrence of early tongue cancer [14]. However, the significance of Ki67 expression in NPC is unclear, and conclusions from few small sample studies are different [15, 16].

*According to the 2005 WHO histological classification and pathologic stage [3]

#According to the 2010 International Union against Cancer/American Joint Committee on Cancer (UICC/ AJCC) staging system [25] for NPC.

Expression levels of Ki67 and ERCC1 in nasopharyngeal carcinoma

Table 2: Associations of Ki67 and ERCC1 levels in nasopharyngeal carcinoma with clinical characteristics 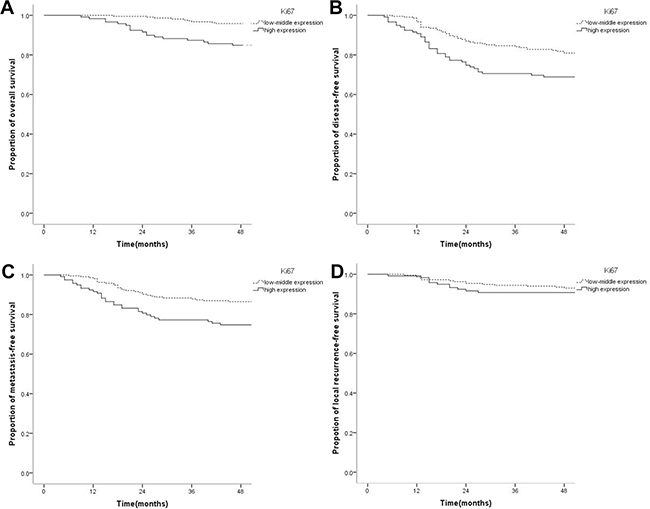 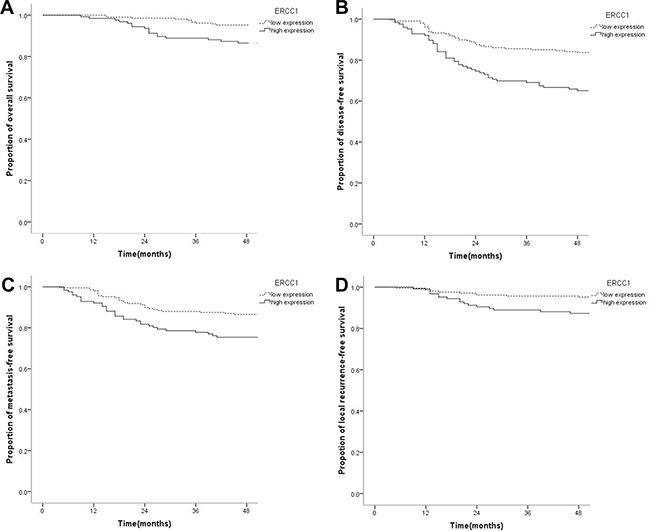 Combined Ki67 and ERCC1 expression and survival of nasopharyngeal carcinoma 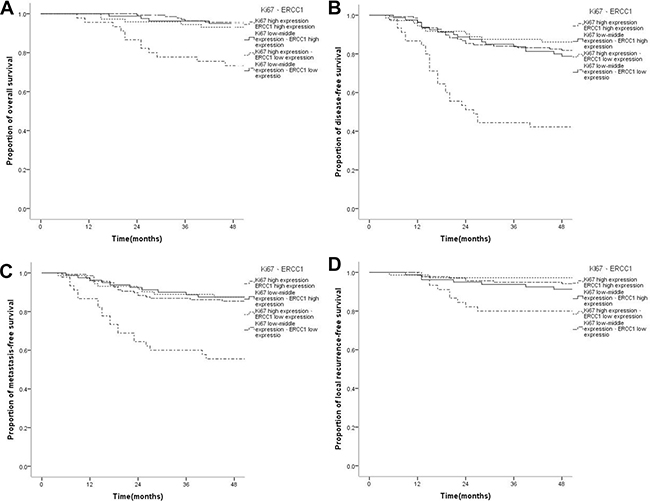 The combination therapy with IMRT as the major therapy has dramatically improved the prognosis of NPC patients; metastasis is the main manifestation of failed treatment [26, 27]. In this study, 87.4% of patients had local advanced disease, and 4-year OS and LRFS rates were 91.3% and 91.9%, respectively, for a DMFS rate of 82.0%, achieving better overall survival and local control. Distant metastasis was the main cause of disease progression, consistent with previous reports [26, 27]. With inherent tumor parameters, some patients with the same clinical characteristics and treatment show different treatment responses and prognoses [26]. Therefore, understanding potential biological indicators and a more accurate prediction of NPC prognosis might contribute to individual treatment options.

It is convenient to detect Ki67 and ERCC1 expression levels in primary tumor tissues as biological prognostic indicators. In this study, patients with NPC expressed Ki67 and ERCC1 at various degrees. Ki67 expression can highly reflect the proliferative activity of malignant tumors [7]; however, its threshold for clinical significance remains unclear. The 14% threshold recommended by common sense remains controversial even in breast cancer [12]. The limited available small sample studies of NPC involving Ki67 expression have yielded discrepant conclusions due to different thresholds used. Gene et al. [15] evaluated 35 NPC cases, and found that Ki67 < 10% indicates longer survival (P = 0.03), but Ki67 expression was not significantly associated with T/N and clinical staging. Ma et al. [16] used 60% as a threshold for high Ki67 expression, and found that Ki67 expression is not significantly associated with clinical staging and survival prognosis. In this study, OS, DFS, DMFS, and LRFS rates between patients with Ki67 ≤ 25% (low expression) and those with Ki67 > 25%~50% (median expression) were not significantly different (P = 0.449, P = 0.136, P = 0.266, P = 0.515). For the high expression group (Ki67 > 50%), OS, DFS, and DMFS rates decreased significantly compared with the low-medium expression group (P = 0.001, P = 0.012, P = 0.007), with the corresponding risks of adverse prognosis increasing significantly (P = 0.003, P = 0.014, P = 0.008), corroborating the findings by Shi et al. [28], who used 50% as observation threshold. Due to sample size difference, the high expression rate of Ki67 in this study was 35.6%, which was lower than that reported by Shi et al. (54.5%, 30/55) [28]; meanwhile, Ki67 expression was significantly correlated with clinical staging (P = 0.005) and N staging (P < 0.001). Thus, selection of an appropriate threshold based on sample size is key to effectively investigate the predictive role of Ki67 in NPC; Ki67 > 50% used as a better observation threshold could reveal adverse prognosis in NPC. Observations with larger samples could help clarify the uncertainty of the association of Ki67 expression with T staging observed in this study (P = 0.058).

In this study, high expression of Ki67 or ERCC1 alone indicated adverse prognosis of NPC. However, combined analysis found no statistically significant differences in OS, DFS, DMFS, and LRFS rates as well as corresponding prognostic risks between the patients with Ki67 and ERCC1 cross-expression, and those with low-medium Ki67 expression combined with low ERCC1 levels (P > 0.05). On the one hand, tumor cells are in the proliferation period when Ki67 is highly expressed. Highly proliferative cells often are more sensitive to drugs and radiation, which results in better therapeutic response [32]. Koelbl et al. [33] reported a complete remission (CR) rate of preoperative chemoradiotherapy in OSCC patients with high Ki67 expression of 43.5%. This was significantly higher than values obtained in the low (26.1%) and medium (30.9%) expression groups. In this study, the high and low-medium Ki67 expression groups showed no statistically significant difference in LRFS of NPC (P = 0.547), and local recurrence risk did not increase significantly (HR = 1.266, 95% CI 0.587–2.728, P = 0.547). On the other hand, tumors with high ERCC1 expression have better ability of damage repair, which is associated with resistance to platinum radiotherapy. The therapeutic response of NPC is therefore worse [31, 34]. Sun et al. [34] assessed 118 cases of NPC who received radiation therapy alone, and found that the LRFS rate in patients with high ERCC1 expression is significantly lower than that of the low expression group (70% vs 86%, P = 0.046). Liang et al. [31] evaluated 76 NPC cases with concurrent chemoradiotherapy, and demonstrated that the response rate of patients with positive ERCC1 expression is significantly lower than that of the negative expression group (75% vs 97.7%, P = 0.008). Therefore, although NPC with high Ki67 and low ERCC1 levels has higher risk of cell proliferation, it also presents increased sensitivity to chemoradiotherapy, which can improve prognosis. However, in patients with low-medium Ki67 and high ERCC1 levels, although there is a certain degree of resistance to chemoradiotherapy, the risk of proliferation for the tumor itself is not high, which can yield relatively better prognosis. With both Ki67 and ERCC1 highly expressed, and the patients having both high risk of tumor proliferation and resistance to treatment, the risk of adverse prognosis may increase significantly.

This study had some limitations. First, due to limited data in this retrospective analysis, we did not assess the efficacy of Ki67 and ERCC1 as well as chemoradiotherapy, or verify the impacts of Ki67 can ERCC1 on radiation and drug sensitivity. Insufficient follow-up time and small sample size were additional shortcomings. Longer follow-up and/or prospective studies with larger sample size would be helpful to further confirm the actual significance of Ki67 and ERCC1 expression in NPC. Moreover, combination analysis of Ki67 and ERCC1 could guide prognosis prediction and treatment options for NPC.

362 NPC patients were selected from the Fourth Affiliated Hospital of Guangxi Medical University from January 2011 to December 2014. Inclusion criteria were: 1) no distant metastasis or previous treatment; 2) pathology of non-keratinizing carcinoma according to the 2005 WHO pathological classification [3]; 3) defined stage according to seventh edition of UICC/AJCC clinical staging standard [25]; 4) IMRT-based radiotherapy or Platinum-based chemoradiotherapy. The study was approved by the Ethics Committee of our Hospital, and informed consent was waived.

Tissue sections were dewaxed and hydrated, and placed in 0.01 mol/L citrate buffer at pH 6.0 for high temperature and high pressure antigen retrieval. The sections were washed with PBS for 5 min, and 3% H2O2 was added for 10 min at room temperature. Next, the sections were washed with PBS for 5 min (three times) before addition of primary antibodies raised against Ki67 and ERCC1, respectively, for overnight incubation at 4°C. Subsequently, the sections were incubated with secondary antibodies for 15 min at room temperature. After washing with PBS as above, the DAB reagent was added for color development, and counterstaining was carried out by hematoxylin staining. All antibodies and kits were purchased from Beijing Zhongshan Biotechnology Co., Ltd (China).

Independent assessments of the results for immunohistochemical staining of ERCC1 and Ki67 were performed by two blinded pathologists.

(3) Rensheng Wang: Final approval of the version to be submitted.

We would like to thank the patients and staff of the Fourth Affiliated Hospital of Guangxi Medical University Oncology Department.