Lung cancer is the most common cancer in men and the leading cause of cancer death in women [1]. The 5-year relative survival of lung cancer is currently 18% [2]. Especially, lung cancer diagnosed in China comprises about 33-50% of the global incidence burden. For lung cancer, 733,300 new cases and 432,400 deaths were estimated to appear in China in 2015 [3]. Cyclophosphamide (CTX) has been widely used to block the progression of lung cancer in clinic [4]. However, CTX generally causes severe acute toxicities like myelosuppression [5]. Once myelosuppression appears, patients are more likely to suffer from infection. Currently, protecting patients from CTX-induced myelosuppression is a main challenge in lung cancer treatment.

Nowadays, colony-stimulating factor, granulocyte colony-stimulating factor and granulocyte-macrophage colony-stimulating factor are the main drugs in treating myelosuppression [6, 7]. However, these drugs can lead to lung injury, splenic rupture and vascular events, and they even promote cancer development and metastasis [8, 9]. As a traditional Chinese medicine, Shuanghuang Shengbai (SHSB) granule has been widely used in clinic for decades in China [10]. It can increase white blood cells (WBCs) and cure myelosuppression, whereas it cannot cause obvious adverse effect or cancer progression [11, 12]. Reportedly, SHSB granule can enhance the epidermal growth factor receptor signaling pathway in bone marrow and the Notch signaling pathway in bone marrow nuclear cells [13, 14]. SHSB granule can reduce the percentage of bone marrow cells (BMCs) in G0/G1 phase and increase the proliferation index of BMCs via up-regulating CDK4, CDK6 and cyclin D1 [15]. Also, it promotes the transformation of hematopoietic stem cells from G0/G1 phase to S phase via up-regulating c-Myc, cell division cycle 25A, Rb, pRb and E2F in bone marrow nuclear cells [10]. On the contrary, it inhibits the proliferation of tumor cells in an opposite way [10, 15].

Reportedly, WBCs are mainly differentiated from bone marrow hematopoietic stem cells (BMHSCs; e.g. CD34+SCA1+ BMHSCs). Lung cancer stem cells (LCSCs) are responsible for the initiation, progression, metastasis and relapse of lung cancers (e.g. SP+ LCSCs, CD24+IGF1R+ LCSCs and CD133+ LCSCs) [16, 17]. Therefore, the proliferation and numbers of BMHSCs and LCSCs are critical for myelosuppression and lung cancer. As a kind of non-coding RNAs, microRNAs play crucial roles in cell proliferation via regulating the expression of target genes post-transcriptionally [18, 19]. However, the effect of SHSB granule on LCSCs and BMHSCs and the corresponding mechanism at microRNA level are still unclear.

In the present study, nude mice with lung cancer were treated with physiological saline, CTX, or CTX + SHSB granule. Then, LCSCs ratio and BMHSCs ratio were determined. Microarray analysis was performed to study the microRNA profiling of LCSCs and BMHSCs. MicroRNA expressions were further validated using quantitative real time-polymerase chain reaction (qRT-PCR). Our results might shed light on the mechanism and therapeutic targets of SHSB granule in curing myelosuppression from the aspect of microRNAs.

Tumor masses in CTX and CTX+SHSB groups were significantly smaller than that in control group (4-d, 6-d, 8-d and 10-d; P<0.05; Figure 1A). When compared with control group, WBCs were significantly decreased after CTX injection (4-d, 6-d and 8-d; P<0.05; Figure 1B). However, SHSB treatment reversed the CTX-induced decline in WBCs, and the number of WBCs was completely recovered 10 days after SHSB treatment (10-d; Figure 1B). Besides, red blood cells and platelets in the three groups were similar (4-d, 6-d, 8-d and 10-d; Figure 1C and 1D). 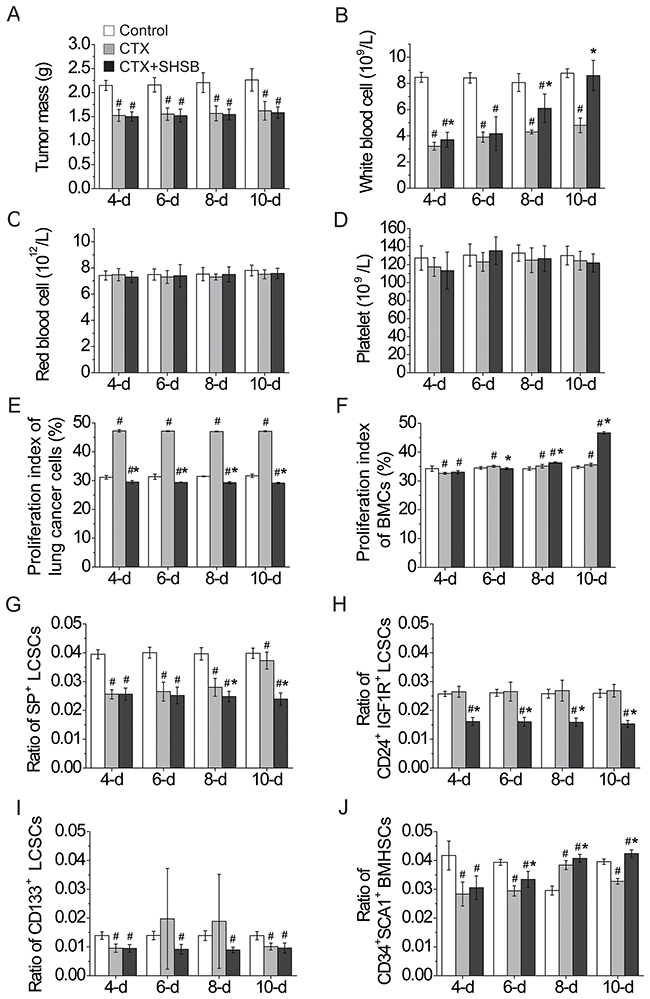 In comparison with control group, CD34+SCA1+ BMHSCs ratio in CTX group was first decreased (4-d and 6-d; P<0.05), then increased (8-d; P<0.05), and finally decreased (10-d; P<0.05) after CTX injection (Figure 1J and Supplementary Figure 1). In contrast, CD34+SCA1+ BMHSCs ratio in CTX+SHSB group was remarkably higher than that in CTX group and constantly increased along with the treating time (4-d, 6-d, 8-d and 10-d; P<0.05; Figure 1J and Supplementary Figure 1). These results were consistent with the results of proliferation index of BMCs (Figure 1F). 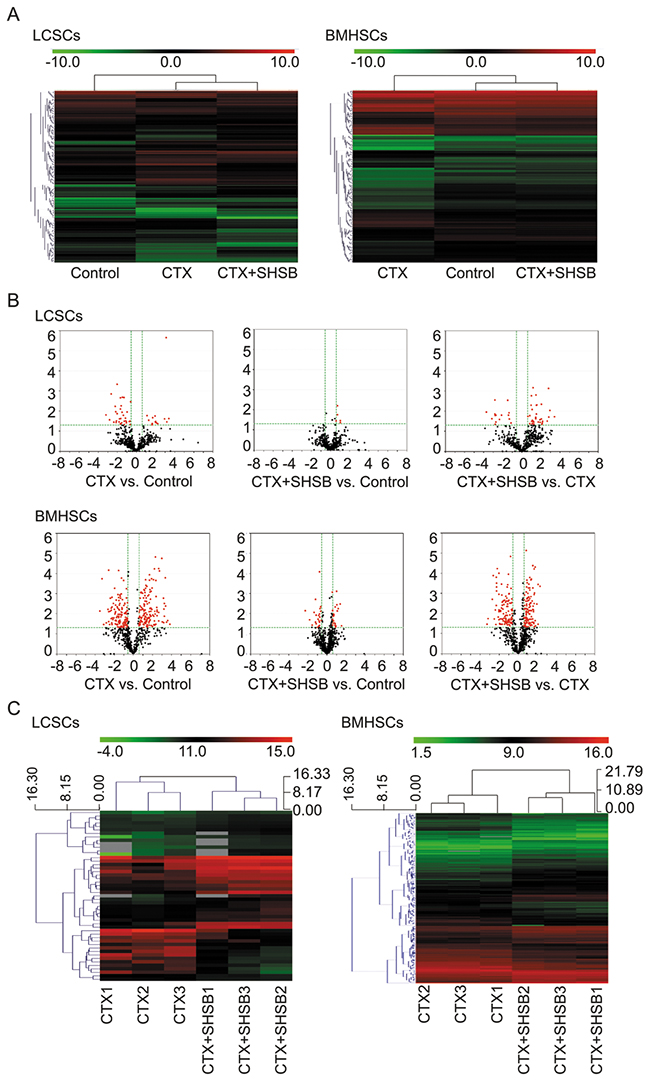 QRT-PCR was performed to confirm the differential expression of 12 DEmiRNAs (Table 2 and Figure 3). As shown in Figure 3, mmu-miR-32* (Figure 3A), mmu-miR-466i-5p (Figure 3B) and mmu-miR-669c (Figure 3C) in SP+ LCSCs were significantly up-regulated after CTX treatment. These microRNAs were further up-regulated after CTX+SHSB treatment. These results demonstrated that CTX promoted the expression of these microRNAs in SP+ LCSCs, and SHSB further strengthened their expression. 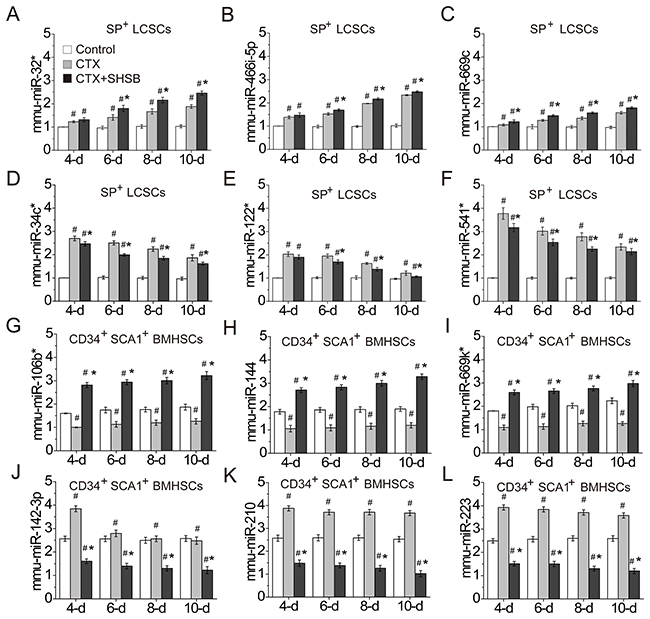 CTX frequently causes myelosuppression [5], and SHSB granule can cure myelosuppression without promoting the development of lung cancer [11, 12]. However, its mechanism and therapeutic targets are still unclear.

As shown in qRT-PCR results, CTX enhanced the expression of mmu-miR-32*, mmu-miR-466i-5p and mmu-miR-669c in SP+ LCSCs, and SHSB granule further strengthened their expression (Figure 3A–3C). Reportedly, miR-32 is located at 9q31.2 in a region of homozygous deletion in various types of cancer [23]. For instance, it promotes the growth, migration and invasion of colorectal carcinoma cells [24]. Currently, little is known about the role of miR-466i-5p in cancer development. Ionizing radiation can induce apoptosis in cochlea hair cells, and miR-466i-5p in HEI-OC1 cells is significantly up-regulated 12, 24 and 48 h after ionizing radiation [25]. MiR-669c is significantly down-regulated in mice with Bronchiolo-alveolar adenocarcinoma [26]. In this study, the up-regulations of miR-32*, miR-466i-5p and mmu-miR-669c in SP+ LCSCs after CTX treatment were consistent with previous studies [23, 25, 26]. Besides, these microRNAs were further up-regulated after CTX+SHSB treatment. This indicated that SHSB might further inhibit SP+ LCSCs proliferation via enhancing the expressions of miR-32*, miR-466i-5p and mmu-miR-669c.

Nude mice are immune deficient, and tumor can be easily established in them. Therefore, four-week old male BALB/C nude mice weighted 20±2g were purchased from Shanghai Laboratory Animal Center of Chinese Academy of Sciences [Batch Number: SCXK (Shanghai) 2007-0005]. These mice were bred in the Specific-Pathogen-Free animal laboratory of Longhua Hospital (Shanghai, China) under a condition of 24-26°C, 65-70% humidity and free access to diet and water.

Lung adenocarcinoma is one of the main kinds of lung cancer, and A549 is a cell line of human lung adenocarcinoma. In this study, A549 was obtained from the Shanghai Cell Bank of Chinese Academy of Sciences. A549 cells were cultured in F12k medium supplemented with 10% fetal bovine serum (Gibco, NY, USA). Then, 0.2 ml 1×107/ml A549 cells with high proliferating activity were inoculated into the oxters of nude mice. Lung cancer models were successfully constructed four weeks after inoculation.

Eyeball was removed, and peripheral blood was taken from mice 4, 6, 8 or 10 days after intraperitoneal injection. WBCs, red blood cells and platelets were counted using an automatic blood cell analyzer (DxH 800™; Beckman Coulter Inc., Miami, FL, USA). Thereafter, mice were sacrificed by cutting off their neck under anesthesia. Xenograft tumors were obtained and weighted under a sterile and RNAase-free condition.

Lung cancer cells were generated from xenograft tumor (4-d, 6-d, 8-d and 10-d) after trypsin digestion. The femur and tibia were taken from the sacrificed mice (4-d, 6-d, 8-d and 10-d) and sterilized using 75% alcohol. BMCs were obtained after splitting and opening the femur and tibia. Then, 2 ml hemolysin was added into BMCs suspension to damage red blood cells. The suspension was centrifuged at 2000 rpm for 15 min.

For each BMCs sample (500 μl, 2×106/ml), 20 μl Anti-CD34 labeled with allophycocyanin and 20 μl Anti-SCA1 labeled with phycoerythrin were added to mark CD34+SCA1+ BMHSCs. Flow cytometry was used to detect the ratios of these stem cells.

All data were shown in a “mean ± standard deviation” manner and analyzed using Statistical Product and Service Solutions (SPSS; version: 18.0) software. Differences between groups were determined using one-way ANOVA method. Least-Significant-Difference test was utilized under a condition of equal variance. Otherwise, Dunnett’s T3 method was used to adjust results. The threshold for statistical difference was set as P<0.05.

To sum up, SHSB granule might cure CTX-induced myelosuppression and increase WBCs via enhancing CD34+SCA1+ BMHSCs proliferation (SHSB granule up-regulated the expressions of mmu-miR-106b*, mmu-miR-144 and mmu-miR-669k*, as well as down-regulated the expressions of mmu-miR-142-3p, mmu-miR-210 and mmu-miR-223 in CD34+SCA1+ BMHSCs). Besides, SHSB granule might also suppress lung cancer progression via inhibiting SP+ LCSCs proliferation (SHSB granule up-regulated miR-32*, miR-466i-5p and mmu-miR-669c in SP+ LCSCs). These findings might help us to better understand the mechanism of SHSB in curing myelosuppression and blocking lung cancer development. Our results might also provide potential therapeutic targets for treating CTX-caused myelosuppression in patients with lung cancer.

In the present study, microRNA profiling was only determined in SP+ LCSCs (8-d) and CD34+SCA1+ BMHSCs (6-d). A time-course microRNA profiling analysis might provide more information. Only the change patterns of 12 microRNAs were detected by using qRT-PCR. Much more microRNAs will be selected to perform qRT-PCR in our future study.