Objective: Our network meta-analysis aimed to determine the assistant efficacy of targeted therapy in combined with chemotherapy for advanced/metastatic triple-negative breast cancer (TNBC).

Results: A total of 15 randomized controlled trials (RCTs), involving 2,410 patients, met our inclusion criteria. Eight targeted agents involving 11 treatment arms were included. The methodological quality of included RCTs was acceptable. The results of direct comparisons showed that progression-free survival (PFS) was significantly longer with bevacizumab+chemotherapy when compared to chemotherapy alone (hazard ratio [HR] = 0.62, 95% credible intervals [CrI]: 0.41–0.87). However, there were no statistically significant differences for all other direct comparison groups. The results of indirect comparison of different targeted agents revealed no significant differences regarding all outcomes of interest. According to ranking probabilities, all outcomes favored bevacizumab+chemotherapy and veliparib+chemotherapy. Bayesian and Frequentist network meta-analysis showed similar results, and the probability of bias of small-study effects was small.

Breast cancer (BC) is by far the most frequent cancer among women, with an estimated 232,670 new cancer cases diagnosed and 40,000 deaths in the United States in 2014 [1]. Triple-negative breast cancer (TNBC), which is characterized by the lack of estrogen/progesterone-receptor (ER/PR) and human epidermal growth factor receptor-2 (HER-2), accounts for 15 to 20% of all BC cases [2]. Because of the absence of specific treatment guidelines for TNBC [3], many clinicians consider TNBC as the most difficult type of BC to treat, and some patients think it is a death sentence [4]. Some studies have also demonstrated that the prognosis of TNBC is poor [5, 6].

Current cytotoxic drug chemotherapy is the mainstay of TNBC treatment despite the absence of a specific therapeutic target [7]. A recent meta-analysis also showed that the odds of pathologic complete response (pCR) to neoadjuvant chemotherapy were highest for the triple-negative in all breast cancer subtypes [8]. However, a standard chemotherapy regimen for adjuvant treatment of TNBC is yet to be established, and a high risk for recurrence and disease progression was found after chemotherapy. Therefore, there remains an urgent need to develop more therapeutic strategies, especially targeted therapies for TNBC [2, 7, 9]. 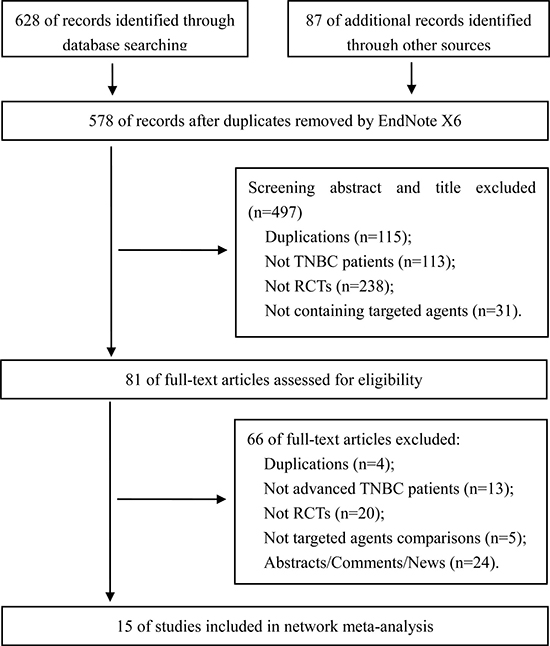 The results of assessment of risk of bias showed that most RCTs (66.7%) mentioned the methods of adequate sequence generation. Six RCTs had double-blind designs. Eight RCTs had open-label designs (Figure 2, Supplementary Table 2). 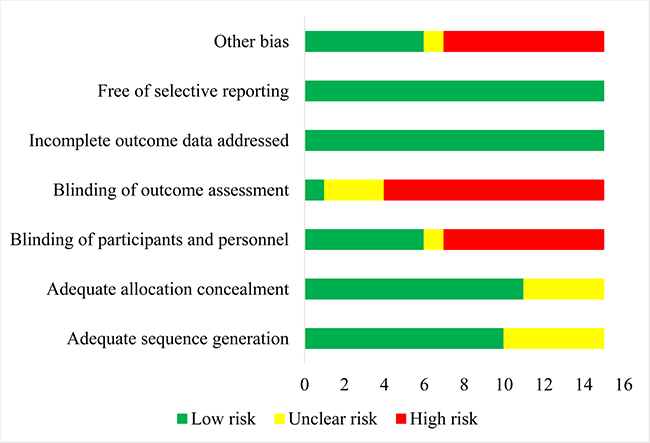 Analysis of heterogeneity and inconsistency 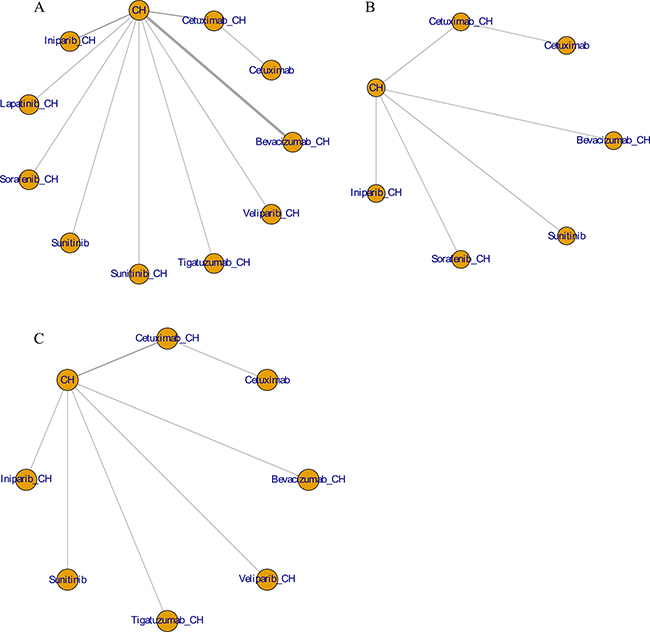 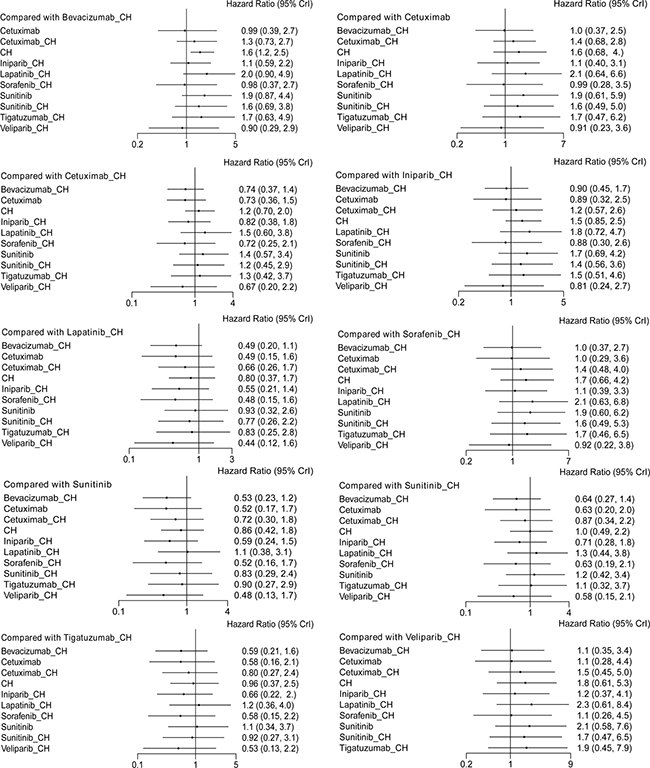 Six studies [16, 17, 19, 21–23] (827 patients), involving seven treatment arms, reported on OS, (Figure 3B). There were no statistically significant differences for all comparison groups in the improvement of OS (Figure 6). According to the results of treatment rank probabilities, iniparib+chemotherapy had the highest probability of being the best treatment arm, followed by bevacizumab+chemotherapy and cetuximab (Figure 7). 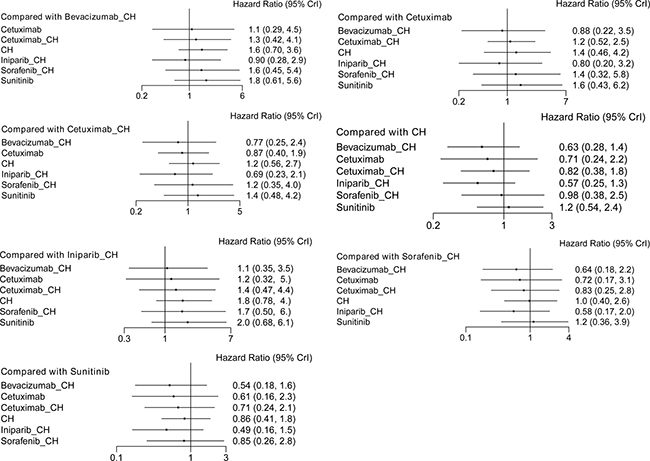 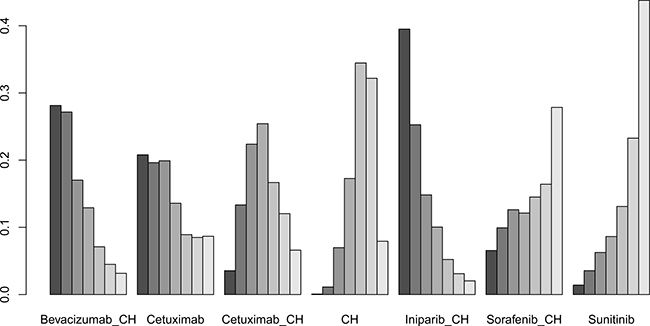 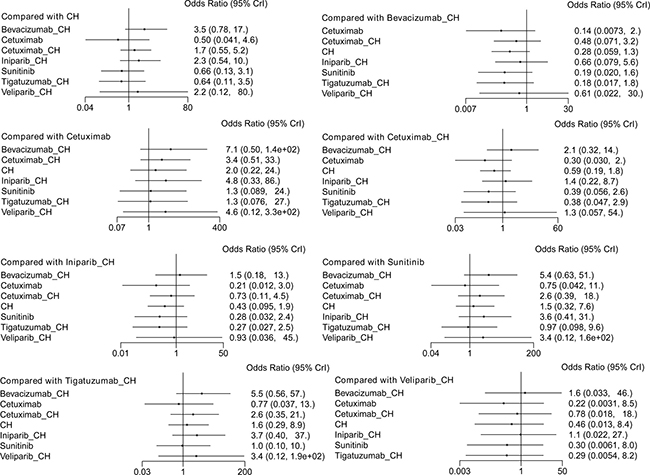 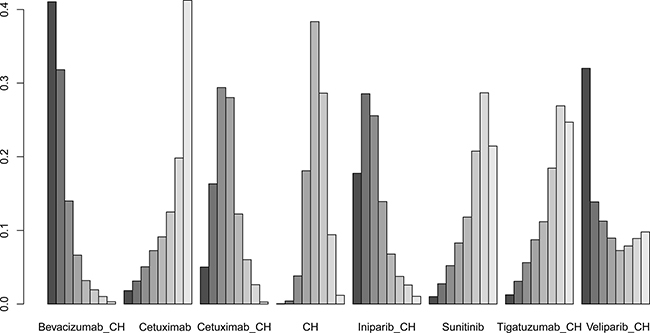 Consistency of Bayesian and Frequentist methods

We also performed a Frequentist network meta-analysis for PFS. Relative HR (RHR) values were calculated to compare the robustness of results between Bayesian and Frequentist methods. The results indicated that there were no inconsistencies among all comparison groups, although the rank was slightly inconsistent. The top four treatments of P-score were still bevacizumab+chemotherapy, veliparib+chemotherapy, sorafenib+chemotherapy, and cetuximab (Supplementary Table 3).

The comparison-adjusted funnel plot can be found in Supplementary Figures 1–3. Different colors correspond to different comparisons. The results showed that the probability of bias of small-study effects was small for three outcomes.

Previous meta-analysis demonstrated that the pCR rate has achieved a significant improvement in TNBC patients treated with a carboplatin-containing or bevacizumab-containing regimen [33]. However, there were no RCTs to compare the clinical efficacy of bevacizumab+carboplatin and carboplatin alone, although our study confirmed that PFS favored bevacizumab+chemotherapy. While the differences in effect size were not statistically significant for veliparib+chemotherapy, it had a high rank probability to be the best treatment option. Kummar et al.’ study indicated that the addition of veliparib to cyclophosphamide did not improve the response rate for TNBC. Careful consideration will be needed for future trial designs involving veliparib [30]. Only two studies were included to compared iniparib+chemotherapy to chemotherapy alone with favored treatment rank probabilities. The results of phase 2 trials showed that the addition of iniparib to chemotherapy improved the clinical benefit and survival of patients with metastatic TNBC without significantly increasing toxic effects [17]. The phase 3 trial of iniparib indicated that no statistically significant difference was observed for OS (HR = 0.88; 95% CI, 0.69 to 1.12; P = 0.28) or PFS (HR = 0.79; 95% confidence interval [CI], 0.65 to 0.98; P = 0.027) [28].

No single-targeted agents have been approved for TNBC, and combining two or more targeted agents might be considered as a more rational and optimal approach to treat TNBC [31]. Our network meta-analysis showed that bevacizumab+chemotherapy had better efficacy in the improvement of PFS than chemotherapy alone, although statistical differences were not found for other comparison groups. However, clinicians should be cautious when considering the implications of targeted agents in the patients of TNBC because the statistical power was insufficient, and the safety of targeted agents was not a concern in the present study.

The methodological quality was moderate to high for included studies. All included RCTs were from multicenter studies, indicating that our original data was more reliable than that of single-center RCTs [34]. The sample sizes of included RCTs ranged from 39 to 519. Small to moderately sized trials have stronger effect estimates than larger trials [35]. Therefore, we used a comparison-adjusted funnel plot to identify the bias of small-study effects. The results showed that the probability of bias of small-study effects was low. Although eight open-label studies were included, performance bias and measurement bias remained small because all outcomes of interest were objective.

There were some limitations in our study. First, the number of studies included was relatively small, and the differences of size ranges were large. In particular, only one RCT was identified for chemotherapy combined with lapatinib, sorafenib, sunitinib, tigatuzumab, and veliparib, respectively. More blinded, rigorously designed RCTs are needed. Second, there were no head-to-head RCTs to compare the efficacy between different targeted agents combined with chemotherapy, and thus evaluation of inconsistency was impossible. Third, we did not detail the composition of chemotherapy because different compositions of chemotherapy were found in the limited number of studies included. Fourth, we only focused on advanced/metastatic TNBC. More evidence-based data was needed to confirm the clinical efficacy of targeted agents for early TNBC. Finally, limited outcomes were reported in each study included, preventing the performance of comparisons between some targeted agents. However, our study also had some strengths. This is the first network meta-analysis of RCTs to systematically compare the PFS, OS, and ORR of targeted agents and chemotherapy in advanced/metastatic TNBC.

In summary, this network meta-analysis showed that only bevacizumab+chemotherapy resulted in a significant improvement in PFS when compared with chemotherapy alone for advanced/metastatic TNBC. However, there were no significant differences between different combination regimens of targeted agents’ in the improvement of PFS, OS, and ORR. Further investigation of novel therapies for TNBC is required to improve patient outcomes.

A systematic search was performed using PubMed, EMBASE, the Cochrane Central Register of Controlled Trials (CENTRAL), Web of Science (via ISI Web of Knowledge), BIOSIS Previews (via ISI Web of Knowledge), and Chemical Abstracts (CA). The search terms were as follows: triple-negative breast cancer*, breast tumor*, breast carcinoma*, breast neoplasm*, random*, randomized controlled trial*, randomized trial*. The search strategy was developed by Ge L and Tian JH (more than 10 years’ experience as information specialist). Full details of the search strategy regarding PubMed and EMBASE are included in Supplementary Text 1. There were no language restrictions on our search. The last search was updated November 18, 2016. The references of included articles and reviews were tracked to identify other relevant studies.

All RCTs that met following eligibility criteria were included: Types of participants: female sex, age of 18 years or older, and advanced/metastatic TNBC patients who had been histologically documented as ER-negative, PR-negative, and not having overexpression of HER-2‚ Types of interventions: targeted agents combined with chemotherapy. ƒ Type of studies: RCTs that compared different targeted agents to chemotherapy for treating TNBC. We excluded non-randomized, phase I clinical trials and studies that compared the efficacy of TNBC to non-TNBC. „ Types of outcome measures: PFS (defined as the time from randomization to confirmation of disease progression or death), OS (defined as the time from randomization until the date of death), and ORR (defined as the percentage of patients who had a complete response, a partial response, or stable disease for at least 6 months).

Two independent reviewers examined the title and abstract of studies found in the search to identify relevant studies according to inclusion criteria. Then, full-text versions of all potentially relevant studies were obtained. Full-texts were examined independently by pairs of reviewers. Excluded trials and the reason for their exclusion were listed and examined by a third reviewer.

Data extraction and assessment of risk of bias

The risk of bias was evaluated according to the Cochrane Handbook version 5.1.0 [37], including the method of random sequence generation, allocation concealment, blinding, incomplete outcome data, selective reporting, and other bias. Disagreements were resolved by a third reviewer.

Geometry of the network

A Bayesian network meta-analysis was performed using the ‘gemtc’ version 0.8.1 package of R-3.3.2 software [38]. The function mtc.run was used to generate samples using the Markov chain Monte Carlo sampler. Four Markov chains were run simultaneously. We set 5000 simulations for each chain as the ‘burn-in’ period. Then, posterior summaries were based on 50,000 subsequent simulations. The model convergence was assessed using Brooks-Gelman-Rubin plots [39].

If a loop connecting three arms existed, inconsistency between direct and indirect comparisons was evaluated by the node-splitting method [40]. A comparison-adjusted funnel plot was used to identify whether there the small sample effect existed between intervention networks.

A frequentist network meta-analysis was also conducted for PFS using the ‘netmeta’ version 0.9–2 package of R-3.3.2 software [41]. RHR was calculated to assess the consistency of results of Bayesian and Frequentist methods.

We are grateful for helpful reviewer comments on this paper.

No funding bodies played any role in study design, data collection and analysis, decision to publish, or preparation of this manuscript.