Recent studies have revealed that rottlerin is a natural chemical drug to exert its anti-cancer activity. However, the molecular mechanisms of rottlerin-induced tumor suppressive function have not been fully elucidated. Notch signaling pathway has been characterized to play a crucial role in tumorigenesis. Therefore, regulation of Notch pathway could be beneficial for the treatment of human cancer. The aims of our current study were to explore whether rottlerin could suppress Notch-1 expression, which leads to inhibition of cell proliferation, migration and invasion in nasopharyngeal carcinoma cells. We performed several approaches, such as CTG, Flow cytometry, scratch healing assay, transwell and Western blotting. Our results showed that rottlerin treatment inhibited cell growth, migration and invasion, and triggered apoptosis, and arrested cell cycle to G1 phase. Moreover, the expression of Notch-1 was obvious decreased in nasopharyngeal carcinoma cells after rottlerin treatment. Importantly, overexpression of Notch-1 promoted cell growth and invasion, whereas down-regulation of Notch-1 inhibited cell growth and invasion in nasopharyngeal carcinoma cells. Notably, we found the over-expression of Notch-1 could abrogate the anti-cancer function induced by rottlerin. Strikingly, our study implied that Notch-1 could be a useful target of rottlerin for the prevention and treatment of human nasopharyngeal carcinoma.

Nasopharyngeal carcinoma (NPC) is an Epstein-Barr virus (EBV)-associated malignant tumor that occurs in nasopharyngeal epithelial tissues. NPC has the highest incidence rate in Southern China and Southeast Asia, which represents a significant disease burden. NPC has an incidence of approximately 2/10,000 per year in endemic areas [1]. Radiotherapy remains the most powerful treatment modality for NPC, especially with the development of advanced imaging and radiation technologies [2]. However, NPC portends a poor prognosis, and the major reason is high rates of recurrence and metastasis. The relapse rate for metastatic patients is as high as 82% by the therapies of combination of radiation and chemotherapy [3]. Therefore, it is required to develop new treatments.

Notch signaling pathway, an evolutionarily conserved transmission mechanism, plays an important role in various cellular and developmental processes [12]. Notch signaling is implicated in tumor angiogenesis and metastasis [13]. Aberrant activation of Notch signaling has been involved in various malignancies, such as pancreatic cancer, breast cancer, lung cancer and leukemia [14–17]. Notch family includes four members (Notch-1, Notch2, Notch3 and Notch4), and serves as receptors for Notch ligands [18, 19]. Then, upon the binding with Notch ligands, Notch will be cleaved by several proteases, including γ-secretases, to release its intracellular domain (NICD), which can translocate to the nucleus and act as a transcription cofactor to regulate target genes expression in a cell-context-dependent manner [20]. Notch-1 has been shown the oncogenic or tumor suppressive character. Under the condition of hypoxia, Notch-1 could be activated by HIF1α (hypoxia-inducible factor 1-α) in lung adenocarcinoma cells, then the activated Notch-1 could suppress the expression of PTEN (phosphatase and tensin homolog) and activate AKT [21]. The status of p53 has a primary impact on the effects of Notch-1 signaling in lung tumorigenesis [22]. The outcome of targeting Notch-1 in NSCLC (non-small cell lung cancer) patients would be dependent on p53 status [22]. The NF-κB (nuclear factor-kappaB) signaling pathway has been proved to play a critical role in the promotion of proliferation and anti-apoptosis of B-lymphoid tumor cells [23]. One study showed that Notch-1 mutations constitutively activate the NF-κB signaling pathway in CLL (chronic lymphocytic leukemia), and indicating Notch1 and NF-κB could be as potential therapeutic targets in the treatment of CLL [23]. These reports suggest that targeting Notch pathway could be helpful for the treatment of human cancers.

In the present study, we explored the effect of rottlerin in CNE1 and CNE2 cells, such as proliferation, apoptosis, cell cycle, migration and invasion. We also determined whether rottlerin impacted Notch-1 signaling pathway, leading to its anti-cancer properties. We provided evidence that rottlerin inhibited cell proliferation, triggered apoptosis, and arrested cell cycle and retarded cell motility in nasopharyngeal carcinoma cells. More importantly, we identified that rottlerin-induced anti-cancer activity via inhibition of Notch-1 signaling pathway in CNE1 and CNE2 cells. These results elucidated that rottlerin could be a potential efficient agent for the treatment of nasopharyngeal carcinoma. 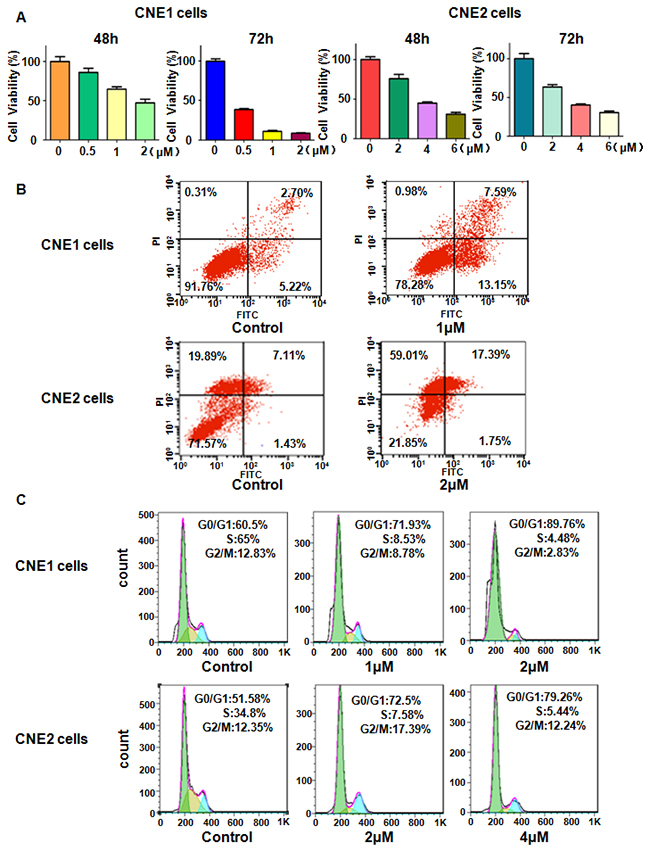 Figure 1: Effect of rottlerin on cell growth, apoptosis, and cell cycle. (A) Effect of rottlerin on cell growth in nasopharyngeal carcinoma cells was detected by CellTiter-Glo® luminescence assay. Compared to control.Control: DMSO treatment. (B) Cell apoptosis in nasopharyngeal carcinoma treated with rottlerin was tested via Flow cytometry. (C) Flow cytometry was used to determine cell cycle.

To explore whether rottlerin controlled cell invasion and migration, we selected Transwell and scratch healing assay to detect this inference. Our transwell assay results showed that rottlerin treatment significantly inhibited cell invasion in dose-dependent manner in nasopharyngeal carcinoma cells (Figure 2A). Our scratch healing assay result demonstrated that the presence of rottlerin decreased the cell migration, and suppressed to more degree with the increase of the dose in CNE1 and CNE2 cells (Figure 2B). These findings indicated that rottlerin inhibited invasion and migration in nasopharyngeal carcinoma cells. 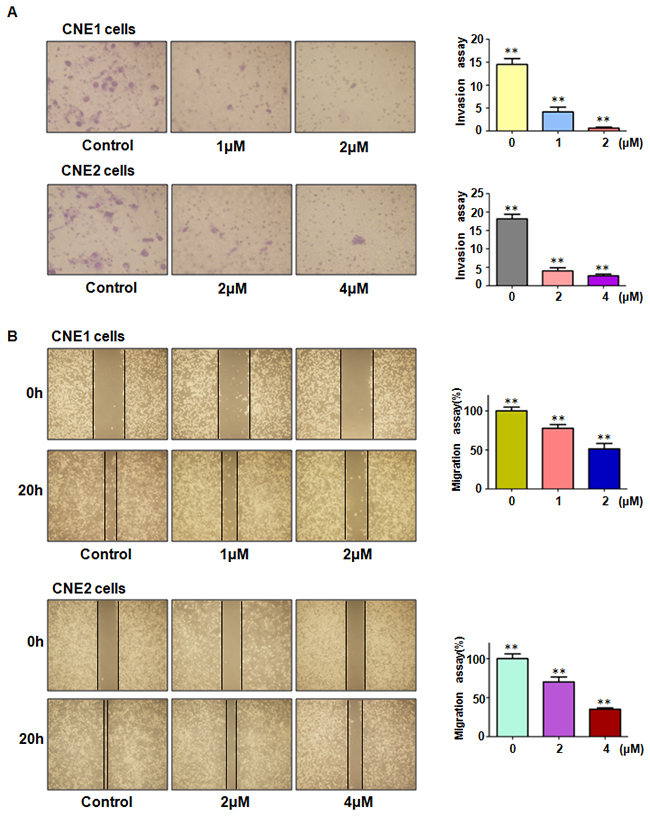 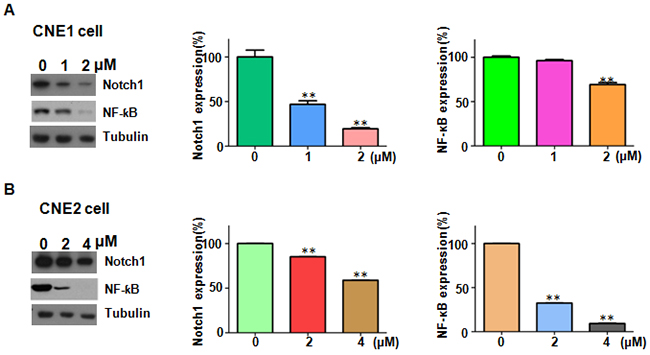 Over-expression of Notch-1 abrogated the anti-proliferation of rottlerin 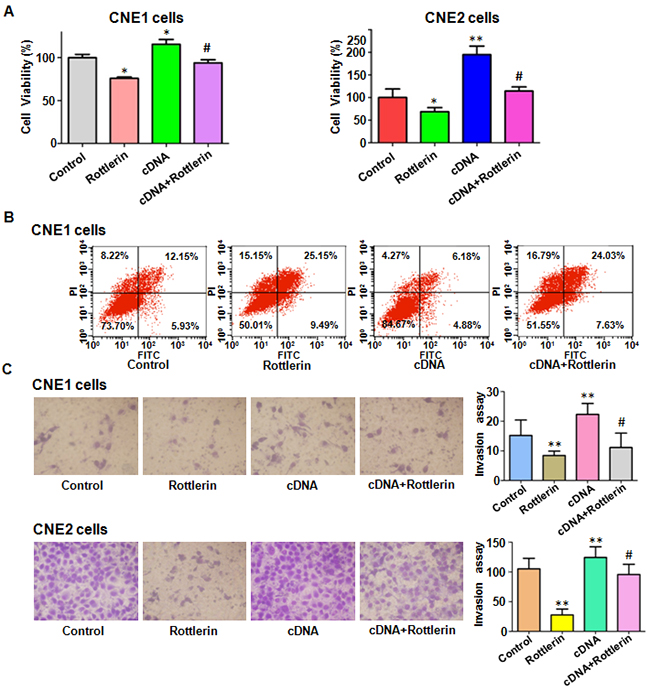 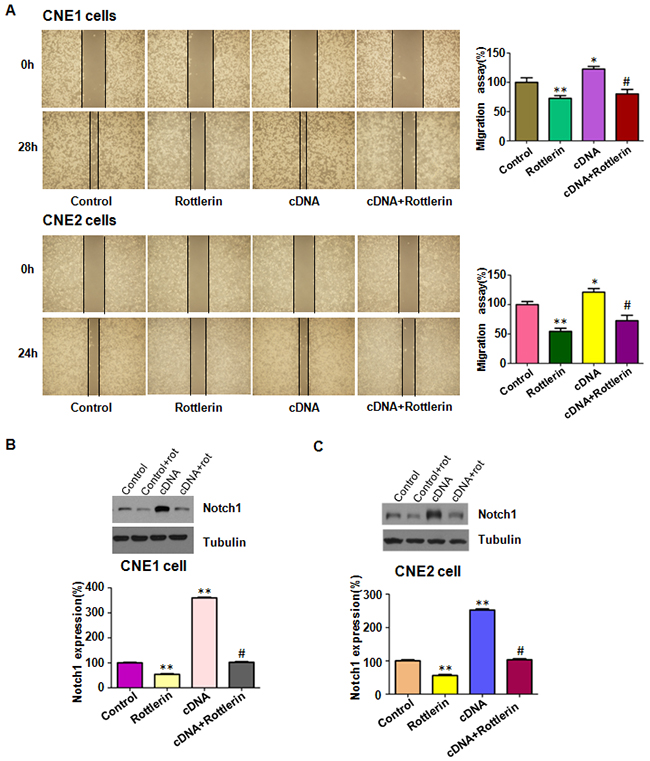 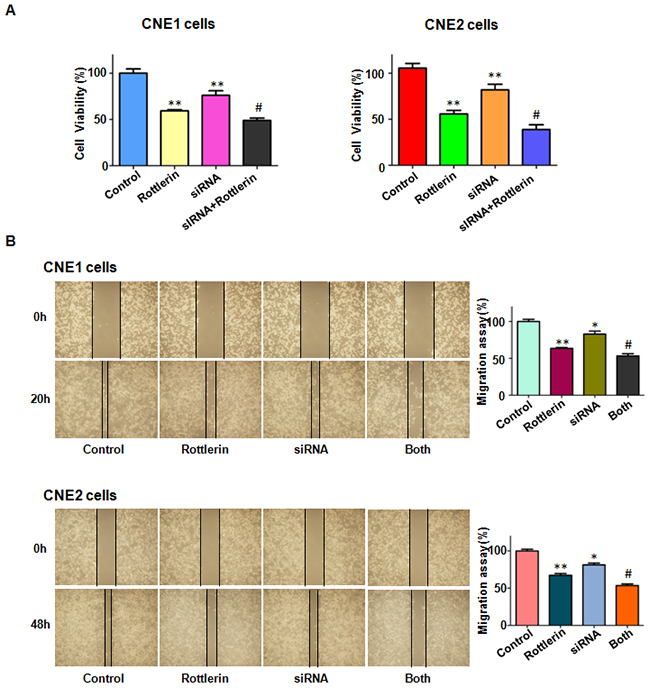 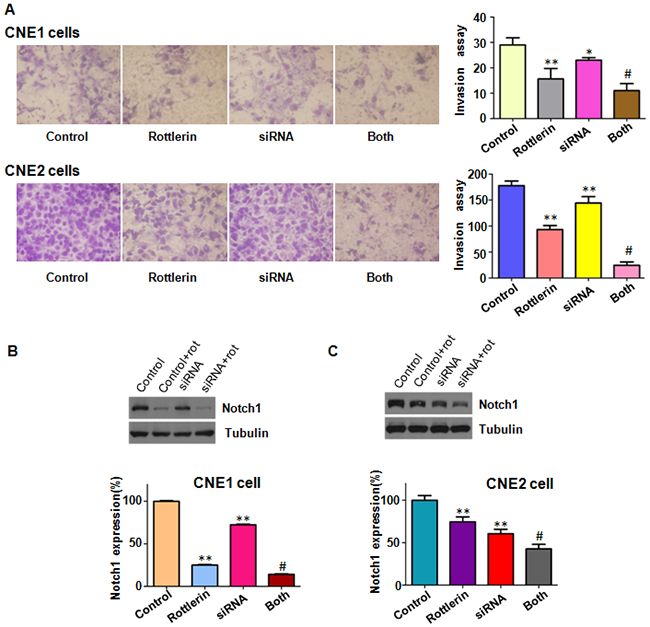 Interestingly, Notch signaling pathway was validated to play tumor suppressive functions in several types of human cancers, suggesting that Notch functions depend on the cellular context [42]. Since Notch-1 could be an effective target to treat nasopharyngeal carcinoma, development of Notch-1 inhibitors is important for the treatment of NPC. Several GSIs have been developed for clinical trials. However, GSIs exhibits non-specific inhibition of Notch receptors and multiple other γ-secretase substrates [43]. GSIs are associated with cytotoxicity in the gastrointestinal tract [43]. Natural compounds have been identified as the inhibitors of Notch signaling pathway. Curcumin was reported to inhibit the DNA-binding ability of ICN and suppress the MT1-MMP and MMP2 proteins in prostate cancer cells [44]. Genistein inhibited Notch-1 expression in pancreatic cancer cells [45]. One study showed that corilagin suppressed cholangiocarcinoma progression through Notch signaling pathway in vitro and in vivo [46]. Another study revealed that alpinetin targets glioma stem cells by suppression of Notch pathway [47]. Our study suggests that rottlerin could be a new inhibitor of Notch-1 in nasopharyngeal carcinoma. More experiments are necessary to determine how rottelrin inhibited Notch-1 expression. Does rottlerin inhibit γ-secretase in NPC cells? Does rottlerin regulate the upstream genes of Notch-1? Does rottlerin govern miRNAs that target Notch-1 expression? Does rottlerin upregulate Fbw7 that degrades Notch-1 level? Further investigation is required to explore whether rottlerin exerts its anti-tumor activity via inhibition of Notch-1 in animal mouse model.

Human nasopharyngeal carcinoma CNE1 and CNE2 cells were cultured in DMEM medium with 10% fetal bovine serum and 1% penicillin and streptomycin in a 5% CO2 at 37°C. Primary antibody for Notch-1 (recognize ICN, sc-6014, 1:1000) was purchased from Santa Cruz Biotechnology (Santa Cruz, CA). And NF-κB p65 (#9936, 1:1000) antibody was brought from Cell Signaling Technology. Then monoclonal Anti-Tubulin was purchased from Sigma-Aldrich (St. Louis, MO). All secondary antibodies were purchased from Thermo Scientific. Rottlerin (CAS number 82-08-6, 85% rottlerin) was obtained from Sigma-Aldrich (St. Louis, MO). Rottlerin was dissolved in DMSO to make a 10 mM stock solution and was added directly to the medium at different concentrations. Lipofectamine 2000 was purchased from Invitrogen. CellTiter-Glo (®) luminescent cell viability assay was purchased from Promega (Madison, WI). Cells were treated with 0.1% DMSO as the control group.

Cells were seeded into 96-well plates (5×103 cells/well) for overnight incubation and then treated with different concentrations of rottlerin. After 48 h and 72 h treatment, cell viability was assessed using the CellTiter-Glo® luminescence (CTG) assay. Each value was normalized to cells treated with DMSO.

Exponentially growing cells (3 × 105 cells/well) were cultured in a six-well plate overnight and treated with various concentrations of rottlerin for 48 h. After trypsinizion the cells were washed with PBS, then resuspended in 500 μl binding buffer with 5μl Propidium iodide (PI) and 5μl FITC-conjugated anti-Annexin V antibody. Apoptosis was analyzed by a FACScalibur flow cytometer (BD, San Jose, CA, USA)[48].

Cells (3× 105 cells/well) were seeded in a 6-well plate overnight and then treated with 1 μM and 2 μM rottlerin for 48 h. After 48 h, cells were collected and washed with PBS. Then, suspended cells with 70% cold alcohol were kept at 4°C overnight. Prior to analysis, the cells were washed with cold PBS, and re-suspended at 1×106 cells/ml in PBS. Cells were incubated with 0.1 mg/ml RNase I and 50 mg/ml Propidium iodide (PI) for 30 min. Cell cycle was analyzed with a FACScalibur flow cytometer (BD, San Jose, CA).

CNE1 and CNE2 cells were cultured in 6-well plates. After cells converged almost 100%, scratched the cells with a 200 μl yellow pipette tips, and then absorbed the supermatant cells washed with PBS. Treated with different concentrations of rottlerin to cells and incubated for 20h. The scratched area was photographed with a microscope at 0 h and 20 h, respectively [49].

The transwell invasion assay was performed using a 24-well plate with 8-mm pore size chamber inserts (corning, New York, NY, USA) and Matrigel (BD Biosciences). The cells were treated with rottlerin or Notch-1 transfection or combination, and seeded into the upper chamber of insert, which were suspended in serum-free culture medium. Then, complete medium was added into the under chamber. After incubation for 24 h, the invaded cells in the membrane of the chamber were stained with Wright’s-Giemsa, and then photographed with a microscope.

CNE1 and CNE2 were transfected with Notch-1 cDNA or Notch-1 siRNA or empty vector using lipofectamine 2000 following the manufacture’s instruction. Notch-1 siRNA sense: 5’-CCG UCA UCA AUG GCU GCA ATT-3’; antisense: 5’UUG CAG CCA UUG AUG ACG GTT-3’. They were purchased from GenePharma (Shanghai, China). After the transfection about 2 days, these cells were harvested to future analysis as a part of the results.

Cells total protein were extracted, and then tested protein concentrations by BCA Protein Assay kit (Thermo Scientific, MA). Each containing 40 μg of total protein were separated by 10% SDS-polyacrylamide gel and transferred to Polyvinylidene Flouride (PVDF) membranes. Then the membranes were blocked by 5% nonfat milk in TBST at room temperature. The immunoblots were probed with primary antibodies overnight at 4 °C. After washed with TBST for three times and then incubated with secondary antibody for 1h at room temperature. The immune reaction was visualized detected by electrochemiluminescence (ECL) assay [50].