A patient-derived orthotopic xenograft (PDOX) mouse model of a cisplatinum-resistant osteosarcoma lung metastasis that was sensitive to temozolomide and trabectedin: implications for precision oncology

In the present study, we evaluated the efficacy of trabectedin (TRAB) and temozolomide (TEM) compared to cisplatinum (CDDP) on a patient-derived orthotopic xenogrraft (PDOX) of a lung-metastasis from an osteosarcoma of a patient who failed CDDP therapy. Osteosarcoma resected from the patient was implanted orthotopically in the distal femur of mice to establish PDOX models which were randomized into the following groups when tumor volume reached approximately 100 mm3: G1, control without treatment; G2, CDDP (6 mg/kg, intraperitoneal injection, weekly, for 2 weeks); G3, TRAB (0.15 mg/kg, intravenous injection, weekly, for 2 weeks); G4, TEM (25 mg/kg, oral, daily, for 14 days). Tumor size and body weight were measured with calipers and a digital balance, respectively, twice a week. On day 14 after initiation of treatment, TEM and TRAB, but not CDDP, significantly inhibited tumor volume compared to untreated control: control (G1): 814.5±258.8 mm3; CDDP (G2): 608.6±126.9 mm3; TRAB (G3): 286.6±133.0 mm3; TEM (G4): 182.9±69.1 mm3. CDDP vs. control, p=0.07; TRAB vs. control, p=0.0004; TEM vs. control p =0.0002; TRAB vs. CDDP, p =0.0002; TEM vs. CDDP, p =0.00003. The results of the present study show that a PDOX model of an osteosarcoma lung-metastasis that recurred after adjuvant CDDP-treatment has identified potentially, highly-effective drugs for this recalcitrant disease, while accurately maintaining the CDDP resistance of the tumor in the patient, thereby demonstrating the potential of the osteosarcoma PDOX model for precision oncology.

Osteosarcoma is a mesenchymal tumor comprising spindle cells and osteoid formation. Osteosarcoma incidence is greatest in adolescence and again in the seventh and eighth decades. Osteosarcoma first-line therapy is high-dose methotrexate, cisplatinum (CDDP), doxorubicin, and ifosfamide. Metastatic osteosarcoma has a less than 20% long-term survival rate that has not improved for many years [1–7].

Temozolomide (TEM) has been used clinically against high-grade glioma [8], melanoma [9], and pediatric rhabdomyosarcomas [10]. TEM has been tested pre-clinically against osteosarcoma cells combined with a molecular targeting drug [11]. TEM has also been tested as a single-agent against 6 osteosarcoma xenograft models and achieved complete response in two and stable disease in one [12]. Methylation of the O-6-methylguanine-DNA methyltransferase (MGMT) gene is correlated with sensitivity to TEM and may become as a biomarker for TEM. Methylation of the MGMT gene occurred in 23.5% of osteosarcoma patients in one study [13].

Trabectedin (TRAB) is an alkylating agent derived from the Caribbean tunicate, Ecteinascidia turbinate [14]. TRAB has been tested on patients with liposarcoma and leiomyosarcoma [15, 16]. TRAB arrests cells in the G2/M phase of the cell cycle [17]. TRAB has shown efficacy against CDDP-resistant bone cancer in vitro [18]. TRAB is marketed as Yondelis (Johnson & Johnson, Raritan, NJ) for leiomyosarcoma and liposarcoma. (https://www.cancer.gov/news-events/cancer-currents-blog/2015/fda-trabectedin-sarcoma).

TRAB has been used for recurrent osteosarcoma patients with a 12% partial response rate [19]. Patients with metastatic osteosarcoma that had the wild-type AAP1164-excision-repair cross-complementing 5 (ERCC5) gene had major responses to TRAB [20], suggesting this gene could be a biomarker for TRAB.

We previously reported that a subcutaneous transplant nude-mouse model of an ostoeosarcoma lung metastasis that occurred after adjuvant CDDP treatment of the patient, was regressed by tumor-targeting Salmonella typhimurium A1-R (S. typhimurium A1-R). The osteosarcoma was only partially sensitive to the molecular-targeting drug sorafenib, which did not arrest its growth. S. typhimurium A1-R was significantly more effective than sorafenib [21].

In the present study, we tested a PDOX model established from an osteosarcoma lung metastasis that recurred after adjuvant cisplatinum treatment of the patient, for sensitivity to CDDP, TRAB and TEM.

Efficacy of CDDP, TRAB and TEM on the osteosarcoma PDOX mouse model 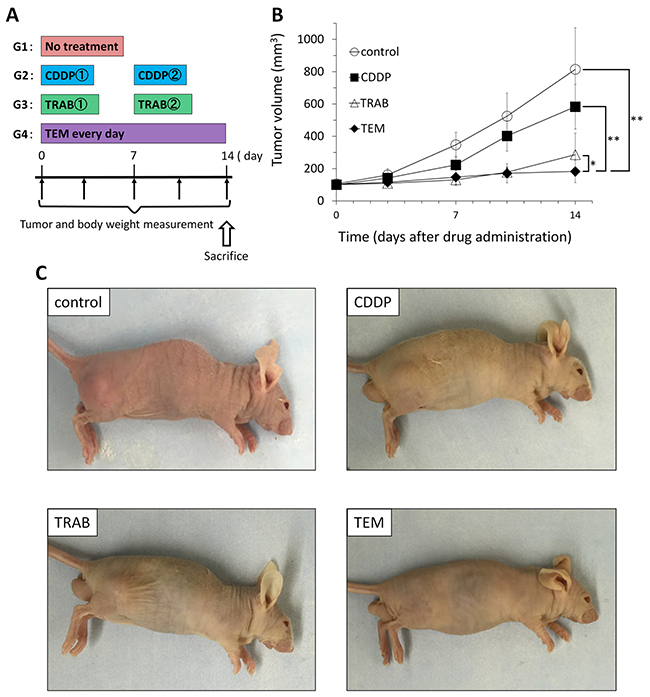 Histology of original patient tumor and control and treated tumors 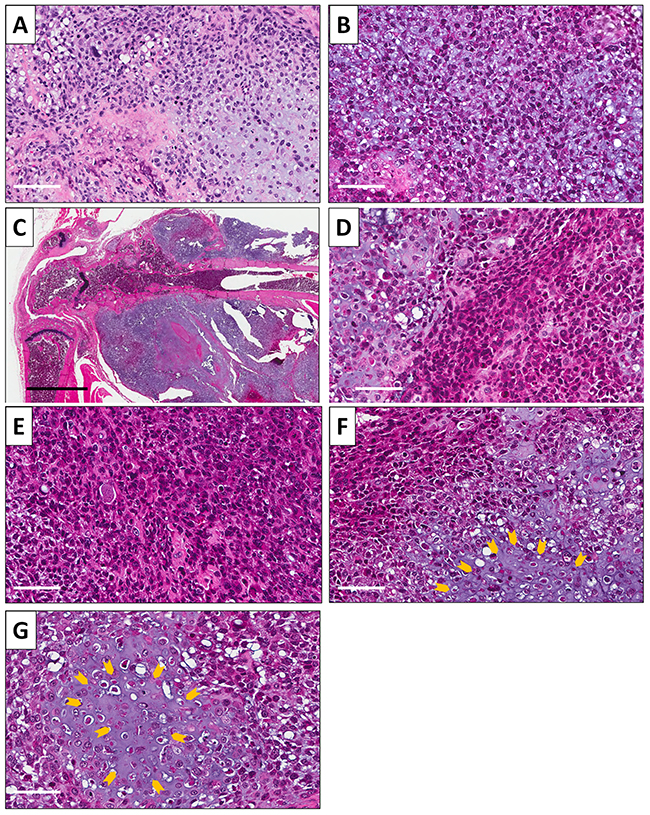 Recurrent metastatic osteosarcoma that has failed first-line therapy is a recalcitrant cancer. The results of the present study suggest that novel active drugs can be identified for this disease using the PDOX model. Further studies are necessary to determine the clinical significant of the present findings. The PDOX model of lung metastatic osteosarcoma that failed CDDP treatment replicated the clinical outcome of CDDP treatment of the patient.

Previously-developed concepts and strategies of highly-selective tumor targeting can take advantage of molecular targeting of tumors, including tissue-selective therapy which focuses on unique differences between normal and tumor tissues [46–51].

Athymic nu/nu nude mice (AntiCancer Inc., San Diego, CA), 4–6 weeks old, were used in this study. Animals were housed in a barrier facility on a high efficiency particulate arrestance (HEPA)-filtered rack under standard conditions of 12-hour light/dark cycles. The animals were fed an autoclaved laboratory rodent diet. All animal studies were conducted with an AntiCancer Institutional Animal Care and Use Committee (IACUC)-protocol specifically approved for this study and in accordance with the principles and procedures outlined in the National Institute of Health Guide for the Care and Use of Animals under Assurance Number A3873-1. In order to minimize any suffering of the animals, anesthesia and analgesics were used for all surgical experiments. Animals were anesthetized by subcutaneous injection of a 0.02 ml solution of 20 mg/kg ketamine, 15.2 mg/kg xylazine, and 0.48 mg/kg acepromazine maleate. The response of animals during surgery was monitored to ensure adequate depth of anesthesia. The animals were observed on a daily basis and humanely sacrificed by CO2 inhalation when they met the following humane endpoint criteria: severe tumor burden (more than 20 mm in diameter), prostration, significant body weight loss, difficulty breathing, rotational motion and body temperature drop.

The study was previously reviewed and approved by the UCLA Institutional Review Board (IRB #10-001857) [17]. Written informed consent was obtained from the patient as part of the above-mentioned UCLA Institutional Review Board-approved protocol. A 16-year old patient with localized left-distal-femoral high-grade osteosarcoma underwent CDDP-based neo-adjuvant chemotherapy and limb salvage with distal femoral replacement. One year later, the osteosarcoma recurred with three bilateral metachronous pulmonary metastases. The patient was treated with curative surgery at the Division of Surgical Oncology, University of California, Los Angeles (UCLA). The patient did not receive chemotherapy or radiotherapy after tumor occurrence prior to lung surgery [21].

A lung metastasis from the osteosarcoma patient was previously established subcutaneously in mice [21]. Subcutaneously grown tumors were harvested and cut into small fragments (3-4 mm). After nude mice were anesthetized, a 10 mm skin incision was made on the right thigh, the vastus lateralis muscle was opened and the biceps femoris muscle was split to reach the distal femur. An incision was made in the lateral patello-femoral ligament, sparing the knee joint and then the lateral condyle of the femur was resected. A single 3 to 4 mm tumor fragment was implanted orthotopically into the space to establish a PDOX model. The muscle and wound was closed with 6-0 nylon suture (Ethilon, Ethicon, Inc., NJ, USA) (Figure 4). 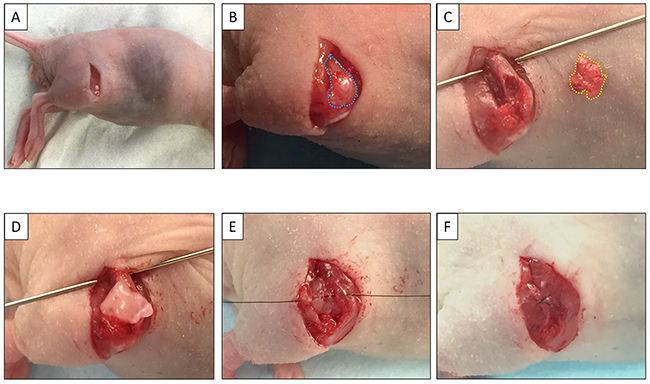 Figure 4: Establishment of the osteosarcoma PDOX model. (A) A skin incision was made on the right thigh. (B) The vastas lateralis muscle and biceps femoris muscle were split to reach the distal femur. (C) The lateral condyle of the distal femur was resected. (D) A single 3 mm tumor fragment was implanted orthotopically into the space. (E) The muscle was closed with a 6-0 nylon suture. (F) The tumor fragment was totally covered by the muscle.

Fresh tumor samples were fixed in 10% formalin and embedded in paraffin before sectioning and staining. Tissue sections (3 μm) were deparaffinized in xylene and rehydrated in an ethanol series. Hematoxylin and eosin (H&E) staining was performed according to standard protocol. Histological examination was performed with a BHS system microscope. Images were acquired with INFINITY ANALYZE software (Lumenera Corporation, Ottawa, Canada).

In the present study, the PDOX model identified TEM and TRAB as potential effective drugs for a recurrent, recalcitrant, CDDP-resistant metastatic osteosarcoma. The PDOX model precisely replicated the CDDP resistance of the patients recurring lung metastasis, suggesting the patient will have a possibility to respond to TEM or TRAB which were effective in the PDOX model. Our results are of particular importance for TRAB, which is marketed as Yondelis for leiomyosarcoma and liposarcoma, since the results demonstrate activity of this drug in CDDP-resistant metastatic osteosarcoma. However, further studies are needed to determine the clinical potential of TRAB for this disease using the PDOX model. In particular, more effective schedules of TRAB, as well as combination drugs need to be identified in the PDOX models at doses that can also be achieved clinically.

Future experiments will include mechanistic experiments on the differential activity of TRAB and TEM compared to CDDP as well as identifying molecular-signaling pathways that are activated by these compounds, especially in PDOX models of patients that express biomarkers for these drugs.

Our results show the potential of the PDOX model for refractory, recurrent osteosarcoma model for precision oncology.

Both TRAB and TEM showed strong inhibition (Figure 1B, 1C) almost arresting tumor growth and causing extensive tumor necrosis (Figure 3F, 3G). This very promising result will be used in future experiments to design combination drug experiments in order to obtain tumor regression in PDOX models and thereby be of potential use for clinical efficacy.

This study was supported in part by the National Cancer Institute grant CA213649.