Gastric cancer is the second leading cause of cancer-related mortality, and remains the fourth most common cancer worldwide [1]. In China, the morbidity and mortality of gastric cancer are higher than all but one other type of cancers [2].

Several studies of clinical follow-up, reoperation and autopsies have reported that 40%-60% of patients with completely resected gstage II or III gastric cancer developed a locoregional recurrence before adjuvant therapy was applied [3]. Local-regional failure most often occurs in anastomosis, followed by the stomach bed and undissected regional nodes [4]. Due to dysphagia, bleeding and pain, some patients with locoregional recurrence cannot be treated surgically and thus receive only palliative therapy [5]. The median overall survival (OS) of these patients was only 5 months (range 0.2-82 months) [6].

Owing to the increased diagnosis of earlier stage disease, better preoperative staging and improved adjuvant treatment strategies, the rate of locoregional recurrence and long-term survival have been greatly improved. The INT0116 and RTOG9904 trials evaluated the outcomes of adjuvant therapy for patients with gastric cancer at high risk for recurrence [7]. These studies reported that application of preoperative and postoperative chemoradiotherapy (CRT) achieved good outcomes in patients with gastric cancer who received curative resection. Thus, these therapies were recommended by the 2013 National Comprehensive Cancer Network (NCCN) guidelines. Cunningham et al. reported that perioperative chemotherapy is beneficial for patients with resectable stage II/III gastric cancer [8]. Sakuramoto et al. compared the efficacy of surgery plus postoperative S1 adjuvant chemotherapy with surgery alone in patients with gastric cancer. Thus, radiotherapy has been excluded from standard regimens [9].

The medical records of 74 patients with locoregional recurrence after complete gastrectomy were retrospectively reviewed, including 52 male patients and 22 female patients, aged between 28 and 80 years (median: 53.5 years). The baseline characteristics of these patients’ were recorded at the point when their primary tumors were detected (Table 1). The primary tumors were categorized as T1 (2, 2.7%), T2 (9, 12.2%), T3 (15, 20.3%), T4 (48, 64.8%). These patients’ characteristics were again recorded when their recurrent tumors were detected (Table 2). According to the AJCC TNM staging system the regional lymph node metastases were categorized as N0 (6, 8.1%), N1 (11, 14.9%), N2 (1, 23.0%) and N3 (40, 54.1%). Vascular invasion was detected in 20 (27.0%) patients. Fifteen (20.3%) patients had signet-ring cell carcinoma, 44 (59.5%) had poorly-differentiated adenocarcinoma, 9 (12.2%) had moderately-differentiated adenocarcinoma and 6 (8.1%) had highly-differentiated adenocarcinoma. The median age of these patients at recurrence was 55 years (range: 28-81 years). The diameter of recurrent lesions ranged from 0.5 to 6.7 cm (mean: 2.53 cm). The recurrence sites were anastomotic or remnant recurrence in 19 patients (25.7%) and local lymph nodes in 55 (74.3%). In ELR group, only one patient synchronously had anastomotic and lymph node recurrence. And three patients in LLR group had both anastomotic and lymph node recurrence and 3 patients in LLR group. 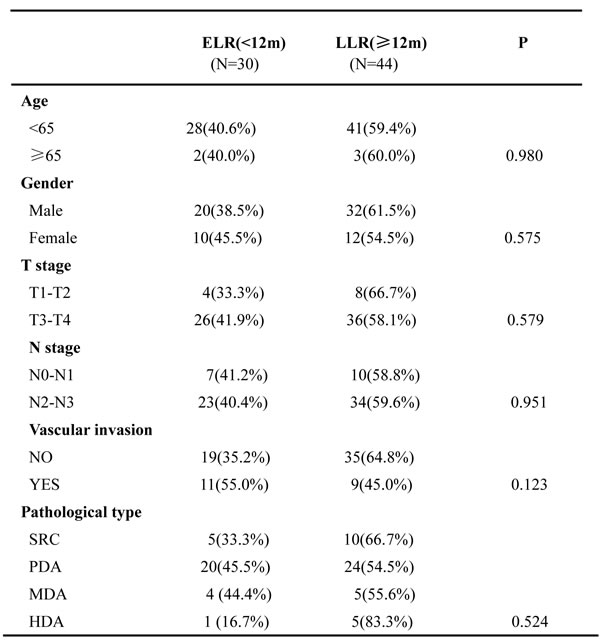 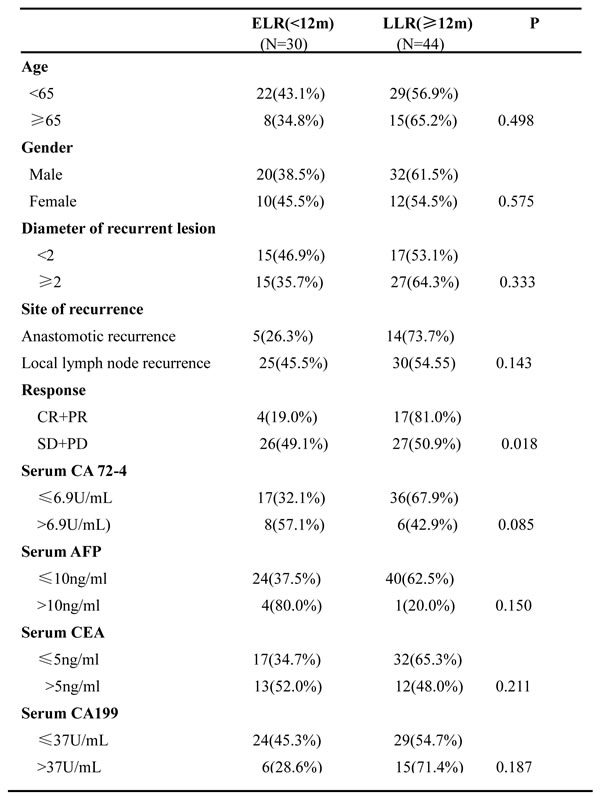 We further analyzed the difference in OS between ELR and LLR patients according to application of radiosensitizing chemotherapy. Unexpectedly, in patients undergoing radiosensitizing chemotherapy prognosis was better for patients with LLR than those with ELR (median OS: 18 m vs 24 m, P = 0.015, Figure 4D). In patients that did not receive radiosensitizing chemotherapy, the median OS differed, but not significantly, between the ELR and LLR group (median OS: 13 m vs 30 m, P = 0.062, Figure 4C). We then used univariate analysis to analyze the factors which impact survival of patients with local recurrent gastric cancer (Table 3). We found that time to recurrence after primary surgery was significantly associated with survival (P = 0.002). Gender, treatment response and serum AFP level were not significantly associated with survival (gender: P = 0.106, treatment response: P = 0.093, serum AFP level: P = 0.211). The hazard ration (HR) of LLR compared with ELR was 0.442 (95% confidence interval: 0.264-0.741), suggesting that LLR was associated with a two-fold reduced risk of cancer-related death.

Next, we performed multivariate analysis to investigate which of these factors influenced prognosis (Table 4). Time to local recurrence was the only factor found to be significantly associated with OS time after local recurrence. ELR patients had almost a 2-fold increased risk of death than LLR patients (P = 0.012). These results suggest that time to recurrence predicts prognosis in unresectable gastric cancer with local recurrence.

Table 3: Univariable analysis for the effect of time to local recurrence on overall survival after locoregional recurrence. 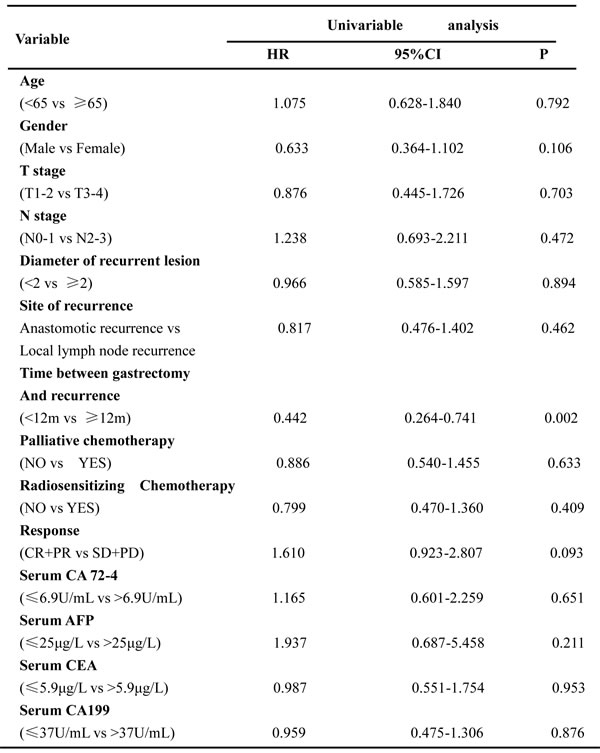 Table 4: Multivariable analysis for the effect of time to local recurrence on overall survival after locoregional recurrence. 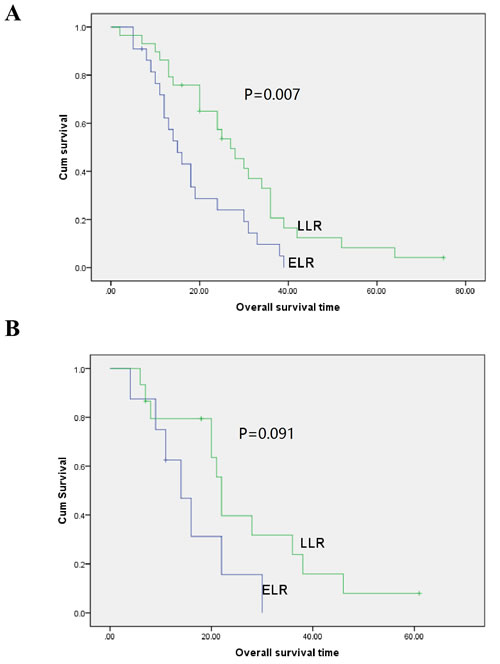 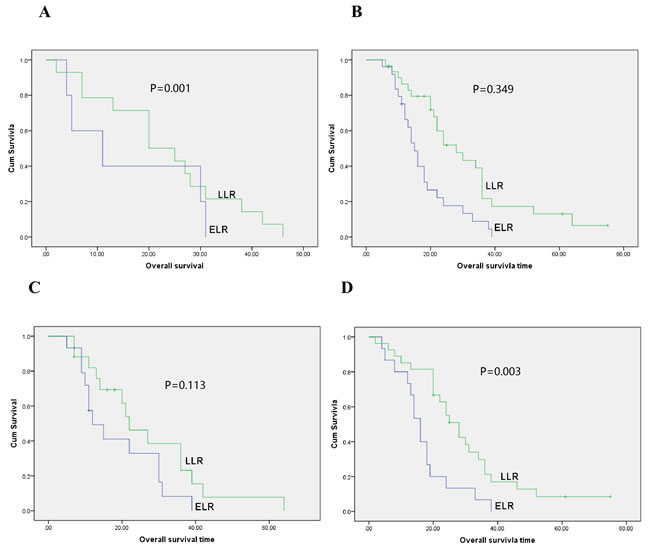 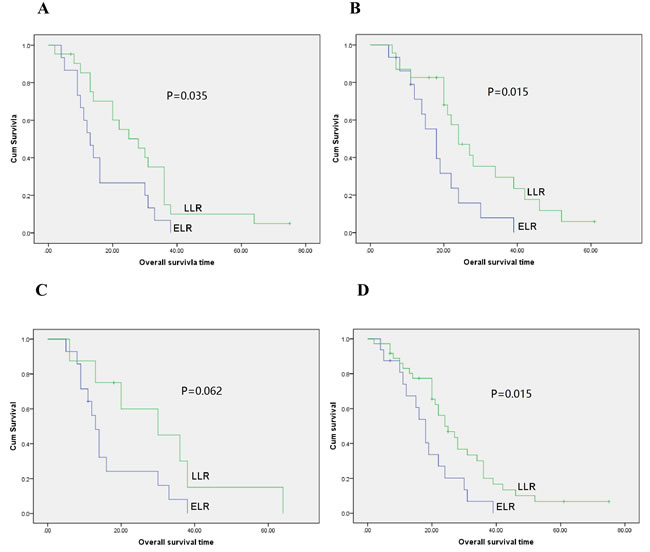 In this study ELR was defined as local recurrence diagnosed within 12 months of primary surgery and LLR was defined as local recurrence over 12 months after primary surgery, according to previous studies in other cancers [26]. We demonstrated that early local recurrence indicated worse prognosis in unresectable gastric cancer with local recurrence. Univariate and multivariate analysis indicated that time to recurrence was an independent prognostic factor for OS in local recurrent gastric cancers. Interestingly, the ORR of the therapy after recurrence in LLR group was 49.1% compared to19.0% in ELR group, and P value had significant difference. This result suggested time to recurrence was strongly associated with the ORR after therapy, indicating that patients with LLR may benefit more from the therapy. In other words, the treatments of the ELR patients need further investigation.

Our conclusions are limited by the scope of this relatively small retrospective study in which local recurrence was detected via self-reported symptoms. Symptomatic patients may have a more extensive tumor growth than asymptomatic patients. Larger prospective studies will be required to assess the prognostic value of time to recurrence for unresectable gastric cancer with local recurrence.

We retrospectively reviewed the medical records of 74 gastric cancer patients with local recurrence after radical gastrectomy. For all patients, radical surgery (R0 resction, D2 lymphadebectomy) was operated for the primary tumors for I-III stage gastric cacner. Adjuvant chemotherapy with Capecitabine plus Oxaliplatin or S-1 was started within 6 weeks after surgery and continued for 6 or 12 months for stage II-III patients and stage I patients with high risk factors (such as poor differentiation, signet ring cell carcinoma, vessel carcinoma embolus and age < 50years old ). Patients were excluded if they had other malignancies or distant metastasis. Local recurrence was detected via follow-up screening or self-reported symptoms. Every patient who was diagnosed as locoregional recurrence was evaluated using the CT scan to determine the clinical stage. Anastomotic recurrence and nodal recurrence in the stations 1-11 lymph nodes and stations 12-16 lymph nodes recurrence which included posterior pancreatic lymph nodes, mesenteric lymph nodes, middle colic lymph nodes, para-aortic lymph nodes and the lymph nodes in the hepatic duodenal ligament were defined as local recurrence. For the patients with stations 12-16 lymph nodes recurrence, the recurrent lesions were include in in-field radiotherapy area that evaluated by a radiation oncologist in our hospital. All patients with gastric cancer were evaluated by the surgeons in Multidisciplinary treatment (MDT). And no patients were suitable candidates for additional surgery; thus these patients were defined as unresectable locoregional recurrence. A diagnostic radiologist reviewed the imaging and measured the diameter of recurrent lesion using the imaging studies. As for the synchronously anastomotic and lymph node recurrence, the diameter of current lesion was defined as the diameter of the biggest recurrent lesion. After local recurrence, all patients received field radiotherapy with or without palliative chemotherapy from January 1997 to December 2014 at Zhejiang Cancer Hospital. All patients received field radiotherapy (44.0 Gy-55.0 Gy) with or without radiosensitizing chemotherapy. The radiosensitizing chemotherapy consisted of S1 at 50 mg/m2 or Gemicitabine at 1.0 g/m2 twice daily from days 1 to 14 during the radiotherapy. And palliative chemotherapy consisted of taxane-based regimen (paclitaxel or docetaxel plus S-1/gemicitbine/5-fluorouracil), oxaliplatin-based regimen (oxaliplatin or oxaliplatin plus S-1/gemcitabine/5-fluorouracil/paclitaxel) and irinotecan-based regimen (irinotecan or irinotecan plus S-1/5-fluorouracil). The clinicopathological characteristics of primary and recurrent tumors were retrospectively collected and analyzed for each patient: age, sex, TNM stage (using the AJCC TNM staging system), situation of vascular invasion, pathological type, size of recurrent lesion, site of recurrence, treatment response and OS after recurrence. The patients were divided into two groups according to time to local recurrence. Early local recurrence was defined as recurrence diagnosed less than 12 months after primary surgery. And a local recurrence diagnosed 12 or more months after primary surgery was defined as a late local recurrence. Overall survival was calculated as the time from diagnosis of local recurrence to death or censoring. This study protocol was approved by the institutional review board of our hospital.

The chi-square test was performed to assess the relationship between clinicopathological variables and time to recurrence. Survival was estimated using the Kaplan-Meier method. The significance of differences between curves was calculated using the log-rank test. The Cox proportional hazards model with the backward selection method was performed for multivariate analysis. All statistical calculations were performed with SPSS 13.0 for Windows (Chicago, IL). Two-sided P values of < 0.05 were considered to represent statistical significance.

15. Kaiser AM, Kang JC, Chan LS, Beart RW. The prognostic impact of the time interval to recurrence for the mortality in recurrent colorectal cancer. Colorectal Dis. 2006; 8:696–703.