Anxiety syndrome is more prevalent in Parkinson’s disease (PD) patients (6%-55%) [1] than in the general population and non-PD patients [2, 3]. Furthermore, anxiety in PD is associated with increased motor symptoms and negatively impacts quality of life [2]. Anxiety is clinically under-diagnosed in PD patients and is neglected while researching PD pathology.

In recent years, neuroimaging technology has been widely used to investigate functional and structural alterations of motor and non-motor symptoms in PD brains [4, 5]. Positron emission computed tomography (PET), single photon emission computed tomography (SPECT) and T1 structural magnetic resonance imaging (MRI) have been used to image individual brain regions while investigating anxiety disorders in PD [4]. Most PET/SPECT reports show correlation between putamen and severity of anxiety [6-9]. However, the association between anxiety in PD and alterations in putamen FCfunctional connectivity (FC) with other brain regions is unknown.

Sixty-five right-handed PD patients were recruited from the outpatient clinic of our hospital and diagnosed with idiopathic PD according to the UK Parkinson’s Disease Society Brain Bank criteria [17]. The following patients were excluded from the study: (1) patients with corticobasal degeneration, progressive supranuclear palsy, multiple system atrophy, vascular parkinsonism, and other forms of parkinsonism; (2) patients with contraindications to MRI such as claustrophobia, metallic implants or devices in the body; (3) patients with severe cognitive decline indicated by Mini Mental State Examination (MMSE) score < 24; (4) patients with clinically prominent depressive symptoms (17-item Hamilton Depression Rating Scale, HAMD score > 14) for controlling possible hybrid factors. None of the patients took anti-psychotic drugs. MRI scans and clinical examinations were performed at least 12 h after withdrawal from medications to mitigate the pharmacological effects on neural activity. Meanwhile, 24 healthy controls without psychological and neurological disturbances or neuroimaging abnormalities were recruited for this study. Written informed consent was obtained from all participants. The study was approved by the ethics committee of The First Affiliated Hospital of Nanjing Medical University.

PD patients were classified into PD-A (n = 18) and PD-NA (n = 45) groups based on the cut off score of 12 on the Hamilton Anxiety Rating Scale (HAMA) score [18-20]. The HAMA scale is a fourteen-item scale (total scores ranging 0-56) that measures both psychic and somatic anxiety symptoms [18], which is useful in evaluating anxiety severity in clinical practice and research [19]. Anxiety disorders of PD patients were assessed by a trained movement disorder specialist (Kezhong Zhang), sensitized to psychiatric disorders in PD. The Unified Parkinson’s Disease Rating Scale (UPDRS-III) and Hoehn & Yahr (H&Y) staging scales were used to assess PD motor severity and disease stage, respectively. Total levodopa-equivalent daily dose (LEDD), LEDD of levodopa preparations and LEDD of dopamine receptor agonists of each PD patient were calculated as previously described [21]. Disease duration of PD patients and education levels of all subjects were recorded. Cognitive function, executive function and symptoms of depression were also quantified separately by MMSE, Frontal Assessment Battery (FAB) and HAMD.

The left and right putamen were defined as two regions of interest (ROI) based on the Anatomical Automatic Labeling (AAL) template by selecting specific areas to study anxiety-dependent resting-state functional networks in PD patients. A voxel-wise FC analysis was performed by computing the temporal correlation between the mean time series of each ROI and the time series of each voxel within the brain. Pearson’s correlation coefficient maps were created for each individual subject and were converted to a z-value using Fisher’s z transformation.

The clinical data was analyzed with the IBM SPSS statistics v20.0.0 software and expressed as mean ± s.d. The continuous and categorical variables were analyzed by either one-way analysis of variance test, chi-square test, independent-sample t-test or nonparametric tests. p < 0.05 was considered statistically significant.

The demographic and clinical characteristics of PD-A, PD-NA and healthy control subjects are summarized in Table 1. The three subject groups showed differences in age, gender, HAMD scores, but education levels were similar. The PD-A and PD-NA subjects had similar disease duration, H&Y staging, total LEDD, LEDD of levodopa preparations and LEDD of dopamine receptor agonists and UPDRSIII scores (p > 0.01). The MMSE and FAB scores for PD-A and PD-NA subjects was also similar. As expected, the HAMA scores were different between the three groups (p < 0.01).

Table 1: Demographic and clinical characteristics of all subjects

Data are presented as mean ± s.d.. 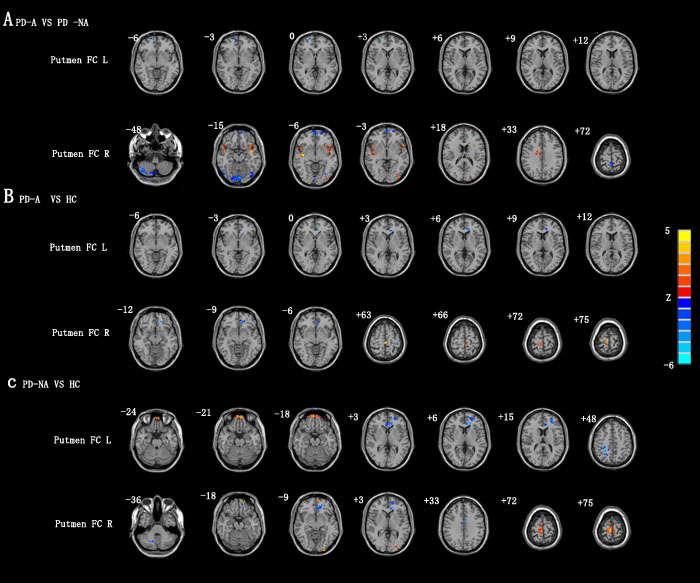 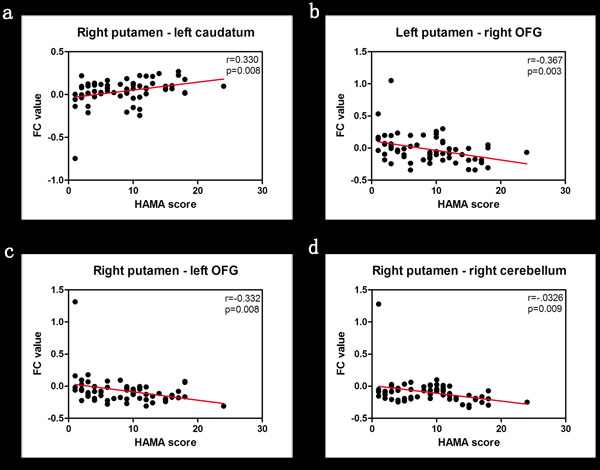 Neuroimaging studies with 123I-FP-CIT SPECT, SPECT with TRODAT-1 or PET have explored anxiety severity in PD patients by assessing dopamine transporter (DAT) availability or density [6-9, 25, 26]. Most studies observed an inverse correlation between DAT availability in the putamen with the severity of anxiety in PD [6, 7, 9]. However, Ceravolo et al. showed that increased striatal DAT density was associated with mild anxiety symptoms in PD patients [8]. The PD rat model depleted of striatal dopamine showed increased anxiety [27, 28], which improved upon L-DOPA treatment [29, 30]. Furthermore, social anxiety disorder, which is common in PD patients was associated with dopaminergic-mediated striatal circuits [31] and sustained suppression of DA receptor activity [32]. These findings suggest a relationship between anxiety and dopaminergic dysfunction in PD patients. Therefore, we focused on interactions of the bilateral putamen with other brain areas in the present study.

Our results show increased putamen FC with caudate in PD-A relative to PD-NA patients. Although striatal dysfunction is typically related to motor impairment in PD [33], it is implicated in emotional processing [34], thereby suggesting a common pathophysiological mechanism. Neuroimaging by [18F] fluorodeoxyglucose PET (FDG-PET) showed that anxiety symptoms in PD were inversely associated with DAT availability in the caudatum or decreased caudate metabolism [35]. Therefore, enhanced putamen FC and caudatum suggested emotional processing during anxiety in PD patients.

There was also reduced FC between cerebellum and putamen in PD-A relative to PD-NA subjects, thereby negatively correlating with anxiety severity. Clinical, experimental and neuroimaging studies indicate that the cerebellum is involved in neural processes beyond the motor domain [42, 43]. For example, electrical stimulation of the human cerebellum produces anxiety and fear [44]. The synaptic connections between parallel fibers and Purkinje cells of cerebellum are involved in the learned fear and their long-term potentiation contributes to fear memory [45]. In functional brain imaging studies with PET, increased blood flow was observed in the left cerebellar hemisphere during fear conditioning [46]. Therefore, both human and animal studies have shown that cerebellum contributes to fear-associated learning. Recently, a meta-analysis of neuroimaging studies on functional topography in the human cerebellum showed involvement of the cerebellar posterior lobe in cognitive/emotional function [42]. This is in agreement with our findings of decreased cerebellum FC, especially in the posterior lobe. Consequently, decreased communication between cerebellum and putamen plays a role in anxiety disorders observed in PD patients.

This study has several limitations. Firstly, our sample size was relatively small and therefore may not have detected exact neural substrates of PD-related anxiety disorder. Secondly, anxiety and depression overlap in PD patients with similar symptoms and pathophysiology [20, 47]. Hence, patients with clinically distinct depressive symptoms were excluded from our study. However, HAMD scores still showed significant differences between study subject groups and therefore, FC was analyzed. Besides, age and gender were significantly different among groups. Many studies have shown correlation between PD-related anxiety disorder with age and gender [2, 48]. Therefore, these were analyzed as covariates. Finally, although the present study defined important regions of interest that are responsible for anxiety in PD, it did not represent complete FC analysis. Therefore, further comprehensive studies are needed to identify other anxiety related networks that were not analyzed by our study.

In conclusion, our study showed that anxiety in PD was associated with altered FC network between putamen and other regions of the brain, especially caudatum, orbitofrontal gyrus and cerebellum. .