Interestingly, there is no data whether G-CSF could attenuate intrahepatic inflammation and hepatocyte apoptosis in steatohepatitis, not just only the simple steatosis. Moreover, optimal dose and schedule of G-CSF was also unclear. Most of previous studies used five-day consecutive G-CSF treatment to mobilize marrow stem cell and/or endogenous oval cell in acute liver disease. As, the steatohepatitis is a chronic disease, therefore clinical treatment strategy that would warrant the beneficial effects needs to be optimized in chronic diseases.

Although a number of studies suggested the protective effects of G-CSF administration in acute liver failure model; however, the optimal treatment strategy for G-CSF administration was still unclear. G-CSF was administered 4–5 times a week in most studies, because the protective effects were assumed to be caused by homing of mobilized BMSCs in damaged liver. However, the potential mechanisms involved in hepatotropic effects of G-CSF that promote liver regeneration and repair has never been extensively studied in liver diseases. Repeated high-dose G-CSF was administration 4–5 times a week mobilizes bone marrow stem cells which might cause complications including splenic rupture, acute lung injury, vascular events and exacerbation of autoimmune or inflammatory conditions [10]. Therefore, the suitable treatment strategy in chronic diseases needs to be optimized.

Therefore, current study aimed to evaluate the protective mechanism of G-CSF beyond the marrow cell mobilization and to clinically optimized G-CSF treatment strategy in NAFLD. 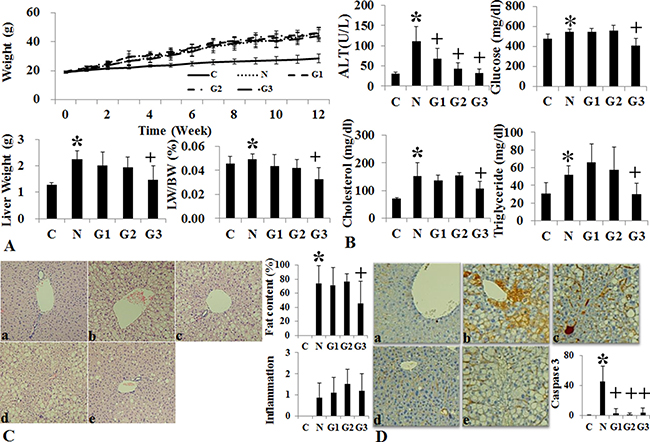 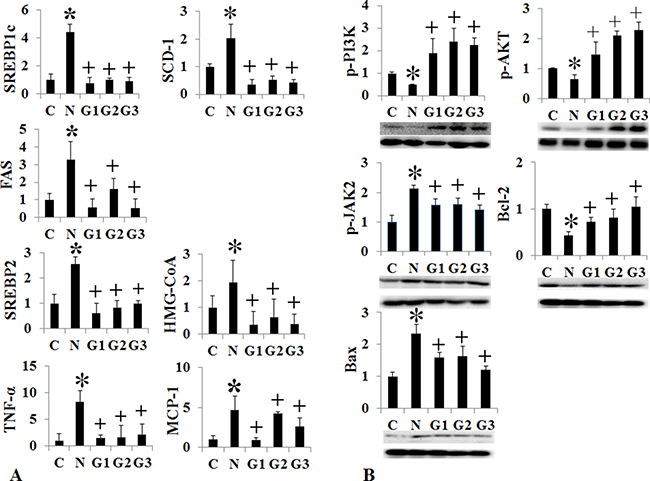 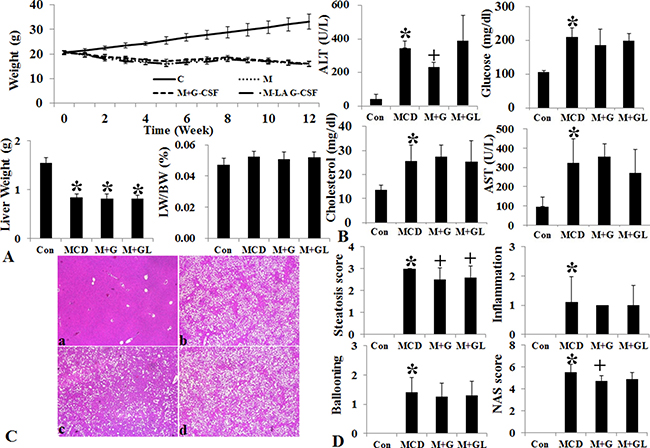 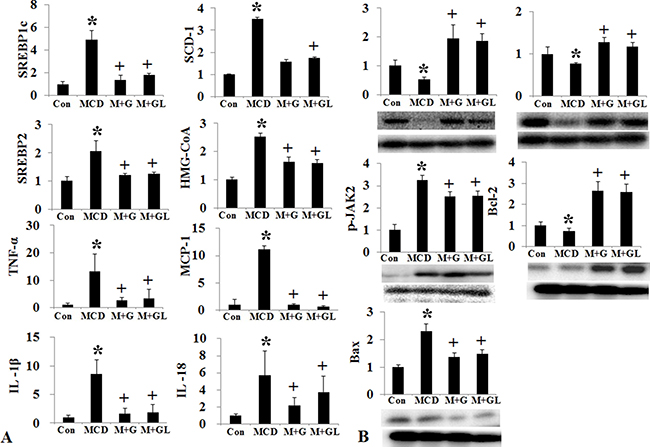 Bone marrow stem cell mobilization was assessed by number of CD34+ cell among peripheral leukocyte using flow cytometry (Figure 6). The number of CD34+ cells, out of 10,000 CD45+ cells, increased in the conventional G-CSF five consecutive days (G2 group) and the long acting G-CSF group (L1, long acting G-CSF once a month) compared to the control group. But conventional G-CSF once a week (G1) and twice a week (G3) protocol did not increase number of peripheral CD34+ cells. 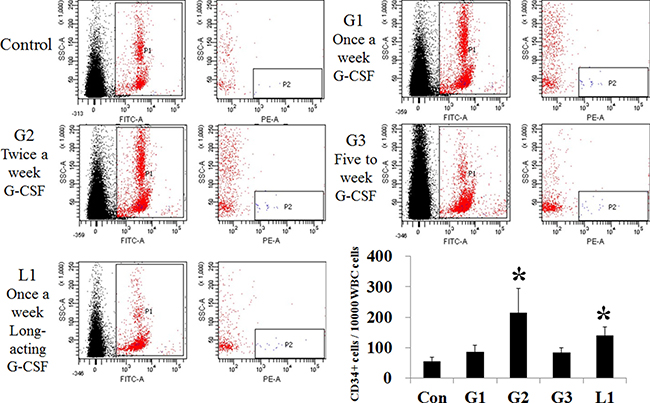 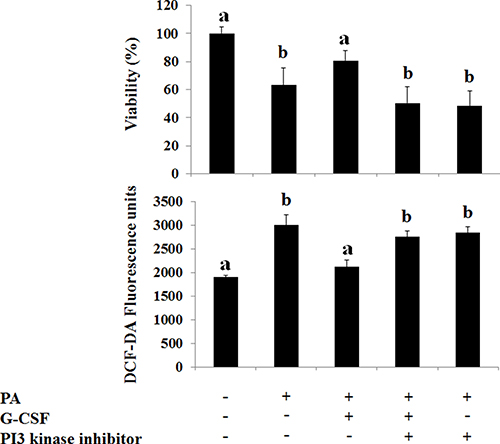 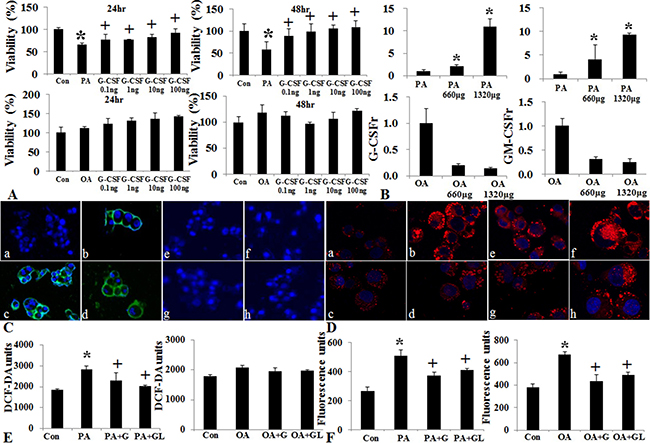 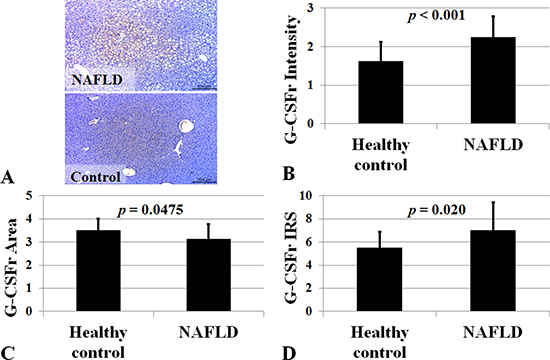 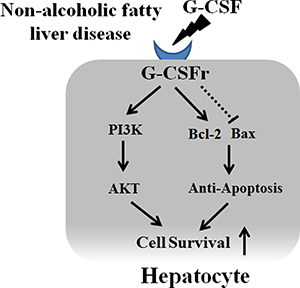 There were several limitations in this study. First, our data showed that hepatotropic dose G-CSF (twice a week) could improve inflammation and hepatocyte apoptosis in NAFLD for the first time, but the effects of G-CSF seem not so different in each group G1 (once a week), G2 (five days), and G3 (twice a week), and there was only a small effect. Second, although G-CSF treatment reduced intracellular fat deposition in In Vitro model, G-CSF treatment decreased hepatic fat accumulation in only MCD induced steatohepatitis model, but improving steatosis was not observed in HF induced model. Effects of G-CSF on steatosis seemed to be somewhat complex and some other mechanism might be involved beyond G-CSFr pathway. Third, marrow cell mobilization by G-CSF treatment was evaluated in healthy mouse. Because expression of G-CSFr increases in disease models, it can’t be justified in disease models as well.

Liver biopsy samples were obtained from 37 NAFLD subjects and 16 normal healthy controls. Patients with HBsAg positive, HCV antibody positive, drug-induced hepatitis, alcohol consumption of > 210 g/week in men and > 140 g/week in women were also excluded. Healthy normal liver tissue obtained from trauma operation. The study was approved by the institutional review board at Hanyang University Hospital (2017-03-002). G-CSF receptor immunostaining was expressed by intensity, extent, and immune reactive score (IRS). IRS was calculated by multiplying the intensity score by proportion score (extent). An intensity score was assigned from 0 to 3 points. The extent score was given from 0 to 4 points.

The blood was withdrawn from the heart was centrifuged at 4°C and 3,000 rpm for 10 minutes to obtain serum. The serum aspartate transaminase (AST), alanine transaminase (ALT), glucose, triglyceride and cholesterol were measures using biochemical analytical system (Hitachi-747; Hitachi, Tokyo, Japan).

All the experimental values are expressed as average ± standard error and were obtained after three independent replicates. SPSS statistics 21 (SPSS Inc., Chicago, IL, USA) was used for statistical analysis. The measured values and significance of control and G-CSF groups were determined using ANOVA. p < 0.05 was considered statistically significant.

This work was supported by a grant from National Research Foundation of Korea 2011-0007127.