Selenium compounds have strong anti-tumor effects and are well-tolerated. We examined the anti-tumor effects of (NH4)2H15Se2VIMo10V3O52·2H2O (Se2Mo10V3), a heteropoly compound containing selenium. Se2Mo10V3 inhibited proliferation in K562 cells with a half-maximal inhibitory concentration of 78.72±2.82 mg/L after 48 h and 24.94±0.88 mg/L after 72 h. Typical apoptotic morphologies were also observed in K562 cells treated with Se2Mo10V3, as were increased intracellular levels of Ca2+, Mg2+, H+, and reactive oxygen species, and decreased mitochondrial membrane potential. In addition, Se2Mo10V3 treatment triggered cytochrome C release and inhibited IκBα degradation and NF-κB translocation. In vivo experiments revealed that 5 or 10 mg/kg Se2Mo10V3 inhibited the growth of sarcoma 180 and hepatoma 22 xenograft tumors. These results indicate that Se2Mo10V3 inhibits tumor growth both in vitro and in vivo and induces apoptosis in K562 cells, possibly by inhibiting the NF-κB/IκBα pathway.

Selenium, an essential non-metal trace element [1], is crucial to the function of several enzymes, including glutathioneperoxidases and thioredoxin reductases [2]. Selenium deficiency is related to tumorigenesis, and selenium recruitment reduces the risk of cancer in humans [3, 4]. Furthermore, selenium compounds can prevent tumor formation [5], mainly by inducing apoptosis [6]. For example, Yang and Wang found that Na5SeV5O18.H20, a heteropoly compound containing selenium, had anti-tumor effects both in vitro and in vivo [7]. When used as therapeutic agents in tumor patients, selenium compounds are well-tolerated [8]. 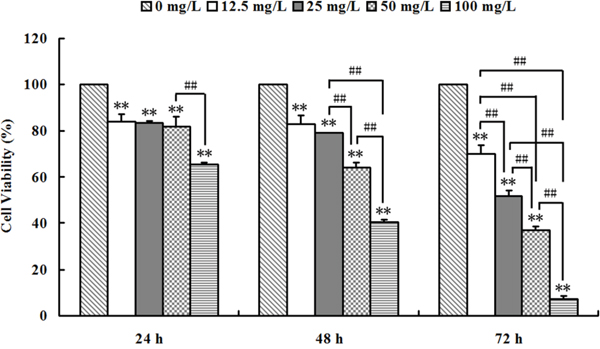 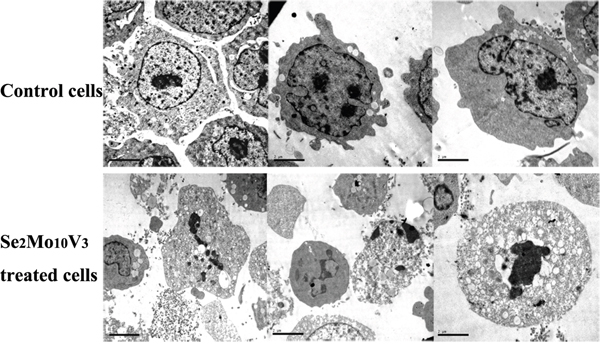 As shown in Figure 3, typical indicators of apoptosis, such as chromatin fragmentation, condensation and margination, cytoplasm vacuoles, and disappearance of cytolemma microvilli, were observed to a greater extent in K562 cells treated with 50 mg/L Se2Mo10V3 than in control cells, which were characterized by normal chromatin, uniform cytoplasm, the presence of cytolemma microvilli, and diastolic cell bodies. 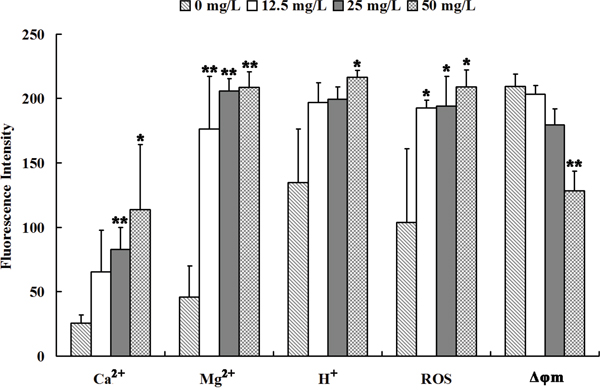 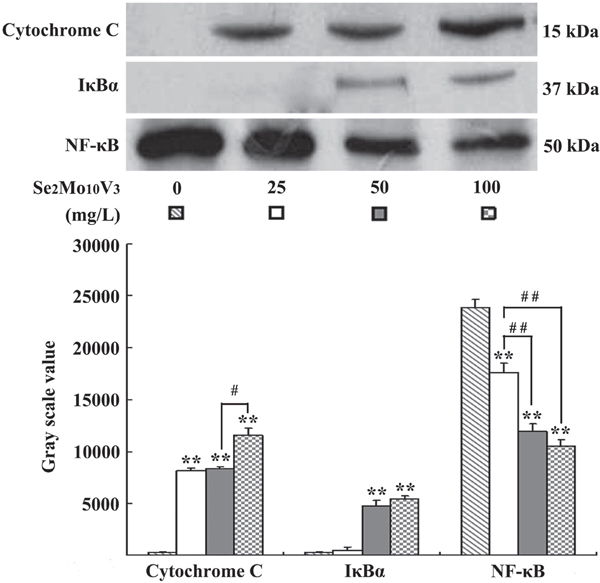 Apoptosis, a genetically controlled mechanism essential for the maintenance of tissue homeostasis and proper development, is crucial to the anti-tumor effects of many chemotherapeutics [9]. Here, we observed typical apoptotic morphology, including chromatin fragmentation, condensation and margination, cytoplasm vacuoles, and the absence of cytolemma microvilli, in Se2Mo10V3-treated K562 cells here. Ca2+ and Mg2+ are key intracellular messengers that play important roles in the induction of apoptosis. Increases in cytosolic Ca2+ and Mg2+ levels have been linked to the activation of a Ca2+/Mg2+ dependent endonuclease which cleaves DNA to generate nucleosomal fragments (180-200 bp) during apoptosis [10, 11]. Here, we confirmed that Se2Mo10V3 increased intracellular Ca2+ and Mg2+ levels in K562 cells. Accumulating data also indicates that ROS have beneficial anti-cancer effects. For instance, increasing ROS levels can enhance apoptosis and thereby inhibit tumor growth [12]. Selenium can also induce the generation of ROS and apoptosis in tumor cells [13]. Moreover, Na5SeV5O18.H20, an analog of Se2Mo10V3, induced an increase in ROS levels in K562 cells [7]; here, Se2Mo10V3 also increased ROS levels in K562 cells. Efficient pH maintenance reduces apoptosis, suggesting that intracellular pH homeostasis and tumor development may be linked [14], and decreasing pH is a hallmark of apoptosis [7]. Consistent with these findings, we observed here that Se2Mo10V3 increased H+ levels, which corresponds to a decrease in pH, in K562 cells. During apoptosis, increasing mitochondrial permeability reduces Δφm and triggers release of cytochrome C into the cytoplasm [15]. Here, Se2Mo10V3 decreased Δφm and triggered the subsequent release of cytochrome C in K562 cells. Changes in the concentration of intracellular ions such as Ca2+ and Mg2+ may also induce mitochondrial impairment and reduce Δφm [16]. It is therefore possible that, in Se2Mo10V3-treated K562 cells, decreased Δφm and cytochrome C release were triggered in part by increased levels of Ca2+ and Mg2+. In conclusion, the results of this study together with previous findings indicate conclusively that Se2Mo10V3 induces the apoptosis of K562 cells.

To determine whether Se2Mo10V3-induced apoptosis is mediated by the NF-κB/IκBα pathway, we also examined changes in NF-κB and IκBα. NF-κB translocation is normally inhibited by IκB proteins that sequester it in the cytoplasm after they are phosphorylated by IκB kinase. Degradation of IκBα thus allows nuclear translocation of NF-κB [17, 18]. It has been reported that NF-κB/IκBα is constitutively active in breast, colon, pancreatic, ovarian, lymphoma, and melanoma cancer cells. Furthermore, inhibition of this pathway using chemotherapeutics may be able to reverse or halt the growth and spreading of tumors [19]. Selenium compounds also inhibit NF-κB in tumor cells [17]. Here, Se2Mo10V3 inhibited the degradation of IκBα and the translocation of NF-κB in K562 cells. Shishodia and colleagues demonstrated that translocated NF-κB activates the expression of anti-apoptotic genes such as Bcl-2 and Bcl-xL, and the suppression of NF-κB inhibited the expression of these genes, thereby promoting apoptosis [20]. Immunocytochemistry also revealed that Se2Mo10V3 treatment decreased Bcl-2 expression and increased Bax expression in K562 (data not shown). An elevated Bax/Bcl-2 ratio increases spontaneous self-oligomerization of those molecules, which facilitates the reduction of Δφm, the release of cytochrome C into the cytoplasm, and, ultimately, apoptosis [21]. Based on these findings, it is likely that decreased Δφm and the release of cytochrome C in Se2Mo10V3-treated K562 cells are triggered in part by an elevated Bax/Bcl-2 ratio.

In summary, Se2Mo10V3 inhibits tumor growth both in vitro and in vivo and induces apoptosis in K562 cells at least in part by inhibiting NF-κB/IκBα. Our results indicate that Se2Mo10V3 may be a useful component of clinical therapy. Further research is needed to examine the anti-leukocythemia effects of Se2Mo10V3 in vivo and to evaluate its preclinical safety on animals.

Se2Mo10V3 (yellow crystal, purity >99%) was synthesized by the State Key Laboratory of Applied Organic Chemistry, Lanzhou University, China. Briefly, solution 1 (0.29 g NH4VO3 dissolved in 10 mL hot water) and solution 2 (1.85 g (NH4)6Mo7O24·4H2O dissolved in 8 mL hot water) were blended and 0.063 g/mL Na2SeO4 were added while stirring (solution 3). Solution 3 was adjusted to a pH of 2 using H2SO4 (1:1), and its color changed from orange red to crimson (solution 4). Solution 4 was stirred with reflux at 90°C for 10 h (solution 5). Solution 5 was filtered while hot. The filtrate was placed at room temperature and the yellow crystals separated out quickly. After vacuum filtration, the crystal was washed using an aqueous solution (pH was adjusted to 2 using H2SO4 (1:1)) and dried. The weight of the crude product was 0.68g. The crude product was recrystallized 2 times using an aqueous solution (pH=2). 1.12g yellow crystal was obtained (Se2Mo10V3). The yellow crystal decomposed readily in the air and was slightly soluble in water, methanol, DMSO, and acetone [22]. RPMI-1640 nutrient solution was purchased from Invitrogen. Fetal bovine serum was purchased from Sijiqing Co. 3-(4,5-dimethylthiazol-2-yl)-2,5-diphenyl tetrazolium bromide (MTT) was purchased from Sigma.

Cytotoxicity was measured in an MTT assay with slight modifications. K562 cells were treated with 12.5, 25, 50, or 100 mg/L Se2Mo10V3 for 24, 48, or 72 h. MTT solution was then added and the cells were incubated for an additional 4 h. The formazan crystals were dissolved with SDS solution and quantified using a microplate reader (ELx800, Bio-TEK). Cytotoxicity is presented as percent inhibition relative to the control cells. The half-maximal inhibitory concentrations (IC50) for Se2Mo10V3 in K562 cells were calculated using IC50 calculation software.

K562 cell morphology was examined using TEM. Cells were treated with 50 mg/L Se2Mo10V3 for 24 h. Cell precipitates were then fixed with glutaraldehyde, post- fixed with osmium tetroxide, dehydrated with a graded alcohol series, immersed in epoxy resin and acetone, and embedded in epoxy resin. Ultra-thin sections were then prepared, dyed using uranyl acetate and lead citrate, and examined with a JEM-100 CX-II TEM (Jeol).

5-week old female mice (species: Kun-Ming; strain: Swiss) weighing 20.0±2.0 g were purchased from the GLP Laboratory, Lanzhou University (Grade II, Certificate No. 14-005). They were housed at 23±1 °C under 12h light/12h dark conditions with ad libitum access to food and water. All animal experiments were performed in accordance with relevant guidelines and regulations approved by the Experimental Animal Research Committee of Lanzhou University. According to standard xenograft tumor research protocols, mice were given subcutaneous injections of 3×106 sarcoma 180 (S180) or hepatoma 22 (H22) cells in the exponential growth phase into the right axillary fossa on day 0. On day 1, mice were randomly divided into control, low, middle, and high dose groups and were treated daily with 0.9% normal saline or 1, 5, or 10 mg/kg Se2Mo10V3, i.g., respectively (n=10 per group). The mice were sacrificed on day 10 and the tumors were removed and weighed. Inhibition of tumor growth was evaluated using percent inhibition relative to tumor weights in control tumor-bearing mice.

H.-N. Z. performed the experiments. W.-L. F. helped to perform the in vitro experiment. C.-N. A. wrote the manuscript, prepared the figures and supplied publication costs. W.-G. L. designed the project. All authors reviewed the manuscript.

12. Salganik RI. The benefits and hazards of antioxidants: controlling apoptosis and other protective mechanisms in cancer patients and the human population. J Am Coll Nutr. 2001; 20: 464S-472S.