E-cadherin expression as a prognostic factor in patients with ovarian cancer: a meta-analysis

The prognostic role of epithelial cadherin (E-cadherin) downregulation in ovarian cancer has been assessed for years while the results remain inconclusive. The aim of our study was to assess this issue. Eligible studies were identified through searches of PubMed, EMBASE and Cochrane Database. In total, 1562 patients from 17 studies were included to assess the association between E-cadherin expression and overall survival/progression-free survival and clinicopathological characteristics of ovarian cancer patients. Hazard ratios (HRs) or odds ratios (ORs) with 95% confidence interval (95% CI) were calculated to estimate the effect. The quality of 17 studies was evaluated using the Newcastle Ottawa Quality Assessment Scale. We also performed subgroup analysis, publication bias and sensitivity analysis in this meta-analysis. The results showed that negative E-cadherin expression significantly predicted poor overall survival of ovarian cancer patients (HR = 1.90, 95% CI = 1.50–2.40). However, negative E-cadherin was not associated with poor progression-free survival (HR = 1.19, 95% CI = 0.86–1.64). Moreover, Negative E-cadherin expression was distinctly associated with FIGO stage (OR = 0.42, 95% CI = 0.31–0.57), tumor grade (OR = 0.48, 95% CI = 0.34–0.67), metastasis (OR = 0.13, 95% CI = 0.07–0.26) and recurrence (OR = 0.48, 95% CI = 0.29–0.79). This meta-analysis revealed that negative E-cadherin expression might be a predicative factor of poor prognosis in ovarian cancer patients.

Epithelial cadherin (E-cadherin, also known as cadherin 1) is a transmembrane glycoprotein that is a member of calcium adhesion protein molecule family [8]. E-cadherin localizes to cell-cell borders and is strongly expressed in adherens junctions to maintain the integrity and polarity of epithelial cells [9]. E-cadherin plays an important role in the invasion and metastasis of a variety of cancers[10]. The loss or downregulation of E-cadherin expression can lead to several pathological changes: loss of contact inhibition, uncontrolled growth and tumor cell dedifferentiation [11, 12]. In the absence of E-cadherin, the connections between cells become loose and disorganized, thereby promoting invasion.

We conducted a search for articles discussing E-cadherin expression and OC patient prognosis, and 167 articles were considered relevant after removal of duplicates. Among these articles, 150 articles were excluded for the following reasons: 1) the study involved non-ovarian tumors; 2) the study did not involve human patients; 3) the article was a review article; 4) E-cadherin expression was not tested using immunohistochemistry (IHC) or other methods; and 5) the hazard ratio (HR) and 95% confidence interval (CI) could not be obtained or calculated according to the information contained in the article. In total, 17 studies were considered eligible. The flow diagram of the selection process is depicted in Figure 1. 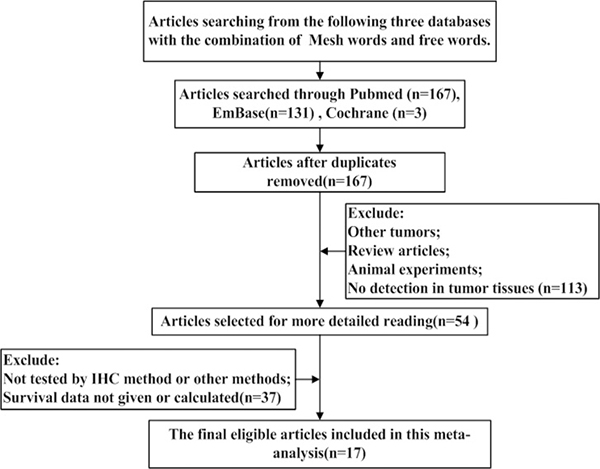 Seventeen studies were selected for our meta-analysis, and the details of these studies are presented in Table 1. These studies were published between 1996 and 2017. E-cadherin expression was verified by IHC in all studies. The sample size of each article was ranged from 20 to 282 patients. A total of 1562 patients from China, Korea, Japan, Germany, Finland, Croatia, Turkey and France were included in the studies, and HRs and 95% CIs were evaluated. The study follow-up periods ranged from 1 to 334 months.

Table 1: Main characteristics and results of the eligible studies 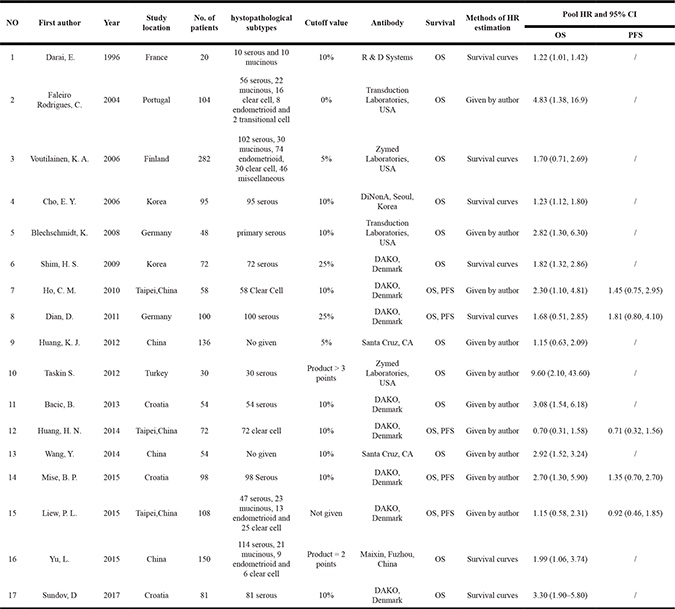 The number of stars on the Newcastle Ottawa Quality Assessment Scale (NOS) for each study ranged from 5 to 9. The average number of NOS stars was 7.41. Sixteen studies were designated as high-quality (NOS stars ≥ 6). Only one study was identified as low-quality (NOS stars < 6). The details of the quality evaluation for each enrolled study are presented in Supplementary Table 1. 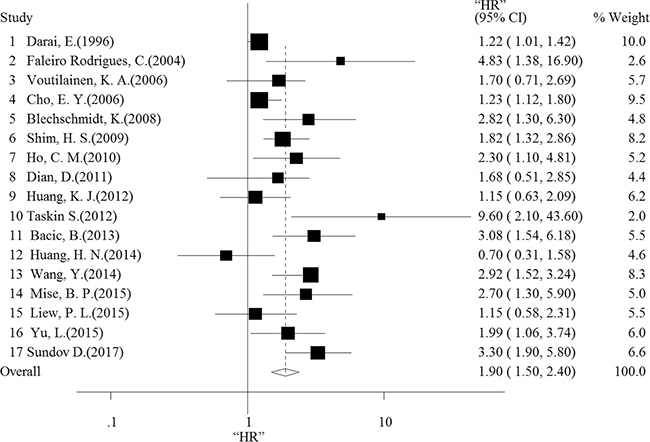 We performed subgroup analyses for the number of patients, publication year, cut-off value, antibody source and study country. The results of each subgroup consistently indicated that negative E-cadherin expression is correlated with poor prognosis. The details of the subgroup analysis are presented in Supplementary Table 2.

The correlation between E-cadherin expression and clinicopathological features

The sensitivity of the pooled data from the 17 studies was evaluated. As shown in Table 3, no significant change was observed in the corresponding pooled HRs, indicating that our conclusion that negative E-cadherin expression predicts poor OS among OC patients is reliable.

Table 3: Results of the sensitivity analysis

Both Begg’s and Egger’s funnel plot were generated to assess the publication bias. The distribution of Egger’s funnel plot appeared asymmetrical in the heterozygote comparison (p = 0.016) (Supplementary Figure 2). Thus, we used a trim-and-fill method to adapt the publication bias. First, three articles with smaller numbers of patients were excluded to generate a symmetrical plot. We considered only the larger studies to estimate an adjusted summary effect. Subsequently, we replicated the funnel plot to replace the excluded studies with their ‘missing’ counterparts around the adjusted summary estimate. Finally, we applied the random-effects model to obtain the adjusted estimate: HR of 1.64 (1.31–2.06) for negative E-cadherin expression (Figure 3). Whether we applied the trim-and-fill method or not, the meta-analysis did not produce conflicting conclusions, suggesting that our results were statistically stable. 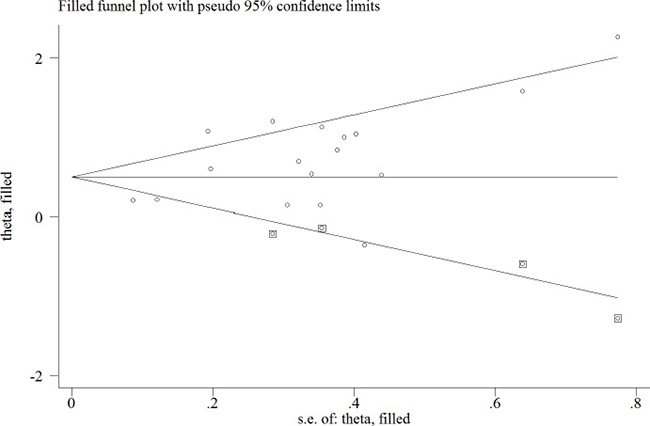 Figure 3: Trim-and-fill analysis estimating the number missing studies for the association between negative E-cadherin and survival outcomes of patients with ovarian cancer. The squares represent the possible missing studies.

In our study, we included additional studies to the subset examined by Peng, H.L. et al. to evaluate the prognostic value of negative E-cadherin expression in OC patients. Finally, we comprehensively conducted this meta-analysis involving 1562 patients from 17 independent studies to explore the association between negative E-cadherin expression and OS or PFS among OC patients. Our results indicate that the negative expression of E-cadherin is correlated with a significant reduction in OS (HR: 1.90 (1.50, 2.40)) but not PFS among OC patients (HR: 1.19 (0.86, 1.64)). Furthermore, we also tested the quality of the 17 papers included in our analysis using NOS, and a trim-and-fill test was used to detect publication bias of all studies. Sensitivity analysis was used to observe the reliability of the results. To the best of our knowledge, we have conducted the largest and most comprehensive meta-analysis of the association between negative E-cadherin expression and the survival of OC patients.

We also performed a comprehensive analysis to investigate the relationship between negative E-cadherin expression and clinicopathological features. The results revealed that negative E-cadherin is associated with certain clinicopathological features, including FIGO stage, tumor grade, metastasis and recurrence. Moreover, previous studies reported that FIGO stage, tumor grade and recurrence may be considered independent prognostic factors for OC patients [31, 32]. Therefore, our results suggest that negative E-cadherin expression might be a more effective predictor of poor prognosis in OC patients.

According to our results, negative E-cadherin expression predicts poor OS (HR: 1.90 (1.50, 2.40)) in OC patients. OS is considered the “gold standard” in oncology trials because of its relevance and objectivity [33]. However, an increasing number of studies recognize that confounding effects of post-study therapies and trial crossover are often present in clinical trials that rely on OS, and PFS is, therefore, the most commonly surrogate endpoint in oncology trials [33]. However, negative E-cadherin expression was not correlated with the PFS of OC patients (HR: 1.19 (0.86, 1.64)). The inability to detect a relationship between these two factors may be the result of the limited numbers of samples (n = 436). Thus, more studies were needed to accurately evaluate the true association between E-cadherin expression and PFS in OC patients.

There are some limitations that should be acknowledged in this meta-analysis. First, the search strategy was restricted to three databases (PubMed, EMBASE and Cochrane) and to articles published in English or Chinese, which may have led to the exclusion of some relevant studies. Second, the different cut-off values for negative E-cadherin expression in these studies may have resulted in inaccurate results and inconsistent conclusions. Third, the use of different E-cadherin antibodies may have produced different results. In addition, several HRs and 95% CIs for the relationship between E-cadherin expression and PFS were not provided. Moreover, the clinicopathological features of many studies were not reported. Therefore, biases were unavoidable in this meta-analysis. Further evidence is required to assess the association between negative E-cadherin expression and PFS in OC patients. Despite these limitations, we have high confidence based on the results of this meta-analysis that negative E-cadherin expression is significantly associated with OS among OC patients.

We searched for all relevant studies on E-cadherin expression and ovarian cancer prognosis using the PubMed, EMBASE and Cochrane databases. We used the following term combinations for our search: “ovarian neoplasm or ovarian cancer or OC or ovarian carcinoma or ovarian tumor”, “Epithelial cadherin or cadherin 1 or E-cadherin” and “prognosis or prognoses or survival outcome”. The last search was updated on February 1, 2017. The reference lists of reviews and primary studies were also searched, and the study authors were approached for help if necessary.

First, we extracted the following information from the included articles: the first author’s name, publication year, study country, number of patients, cut-off value, antibody source, age, FIGO stage, tumor grade, histological type, presence of lymph node or vascular invasion, metastasis, recurrence, HR, 95% CI and E-cadherin expression-related survival. If the HR and 95% CI were not provided, we calculated these values from the Kaplan-Meier curve using the method reported by Chaimani, A. et al. [40]. These calculations were performed independently by two researchers. When the calculations disagreed, mistakes were identified and corrected after discussion.

The NOS is the recommended tool to assess the quality of cohort and case-control studies [41, 42]. In the present work, two independent researchers adopted the NOS to assess the quality of the 17 included studies. The NOS is composed of three major parts: Selection, Comparability and Outcome. Each section also includes several detailed entries. The NOS adopts a semi-quantitative scoring system for assessment. The entry entitled ‘Selection’ and ‘Outcome’ can earn a maximum of one stars, whereas the entry entitled ‘Comparability’ can earn a maximum of two stars. The total number of possible starts is nine. Higher star counts reflect higher-quality studies. Studies ≥ 6 stars according to the NOS method are considered high quality, and studies with < 6 stars are considered low quality.

HRs and 95% CIs were used to evaluate the relationship between negative E-cadherin expression and OC patient prognosis. Heterogeneity among the studies was assessed using the Q test and I2 index. Heterogeneity was present when p < 0.10 and I2 > 50%, and the random-effects model was utilized. Otherwise, we adopted the fixed-effect model. If the combined HR and 95% CI were greater than 1.0, the relationship between negative E-cadherin expression and OS or PFS was considered statistically significant. To investigate the cause of high heterogeneity, we performed subgroup analysis. All 17 studies were divided into several groups according to the number of patients, publication year, cut-off value, antibody source and study location. Subsequently, the HRs, 95% CIs and I2 indexes of the different groups were calculated [43]. The association between negative E-cadherin expression and clinical pathologic features such as patient age, FIGO stage, tumor grade, histologic type, metastasis, the presence of lymph node or vascular invasion, and recurrence was evaluated using the ORs and 95% CIs. If the OR and 95% CI did not overlap 1.0, negative E-cadherin expression was considered to be statistically correlated with the clinical feature. Publication bias was assessed using the Begg’s and Egger’s tests. p < 0.05 was considered to reflect the presence of publication bias. Funnel plots were used to describe the potential publication bias, and a symmetric plot suggested no publication bias. All of the statistical analyses were performed using STATA 10.0 (StataCorp, College Station, TX).

42. Stang A. Critical evaluation of the Newcastle-Ottawa scale for the assessment of the quality of nonrandomized studies in meta-analyses. European journal of epidemiology. 2010; 25:603–5.