Breast cancer is the most frequently diagnosed cancer and the leading cause of cancer death among females. However, mammographic diagnosis is sometimes non-conclusive with a Breast imaging Reporting and Data System (Bi-RaDS) result of 0. Cancer antigen 15-3 (CA15-3) is the most widely used serum tumor marker for breast cancer screening. Platelet distribution width (PDW) is an early indicator of platelet activation. Fibrinogen contributed to angiogenesis and distant metastasis. The aim of this study was to investigate the ability of CA15-3, PDW, and fibrinogen individually or in combination, to distinguish breast cancer from benign breast disease. 200 consecutive patients with breast cancer and 187 patients with benign breast disease were included in this retrospective study. Patients’ characteristics and hematologic tests data at initial diagnosis were collected. The benefit of adding PDW and fibrinogen to a model with only CA15-3 was evaluated as an increased in the area under the curve (AUC) obtained by receiver operating curve (ROC). CA15-3, PDW and fibrinogen are higher in breast cancer patients than in patients with benign breast disease. Single biomarkers had AUC values ranging from 0.687 for fibrinogen to 0.810 for CA15-3. In addition, the combination of PDW, CA15-3, and fibrinogen increased the AUC to 0.900 (0.866-0.928) (p<0.0001), significantly higher than those of any single marker. In conclusion, the combined use of CA15-3, PDW and fibrinogen may be clinically useful in discriminating between breast cancer and benign breast disease in non-conclusive mammography patients.

Breast cancer is the most frequently diagnosed cancer and the leading cause of cancer death among females worldwide [1]. Although mammography is the gold standard for early breast cancer detection, the overall sensitivity of mammography is reduced in Asian women due to the small volume and high density of breast tissue and mammographic diagnosis is sometimes non-conclusive with a Breast imaging Reporting and Data System (Bi-RaDS) result of 0 [2]. Therefore, identification of novel markers in non-conclusive mammography patients is warranted.

In breast cancer, carcinoembryonic antigen (CEA) and cancer antigen 15-3 (CA15-3) are the two most widely used serum tumor markers in clinical practice. However, these biomarkers that are used for the early detection of breast cancer show limited diagnostic sensitivity and specificity. The American Society of Clinical Oncology (ASCO) guidelines do not currently recommend the use of serum CEA and CA 15-3 for screening, diagnosis, staging, or routine surveillance of breast cancer patients after primary therapy [3, 4].

Combination of several biomarkers for the early detection may result in enhanced sensitivities and specificities among BI-RADS 0 patients. The aim of the present study was to investigate the ability of CA15-3, PDW, and fibrinogen, individually or in combination, to distinguish breast cancer from benign breast disease in non-conclusive mammography patients.

Table 1: The characteristics of the participants.

Table 2: The characteristics of the participants between benign group and malignant group. 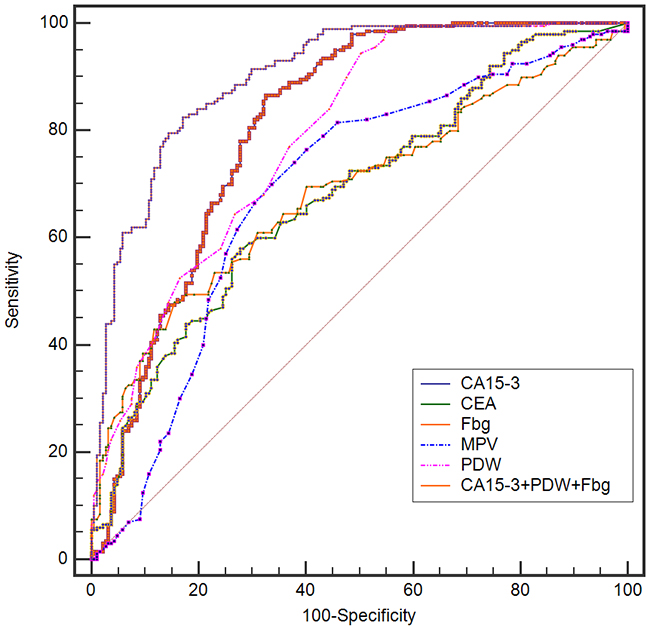 Despite best current medical and surgical treatment, the overall prognosis of patients with breast cancer remains poor. Numerous studies point to the key roles of platelet activation in tumor progression. Thrombocytosis is linked with reduced survival in patients with various tumor types, including cancer of the lung, ovary, endometrium, rectum, kidney, stomach, pancreas, brain, and breast. Recent studies revealed that cancer-associated thrombocytosis was a paraneoplastic phenomenon. Tumors could promote platelet production and activation through the interleukin (IL)-6 pathway [15].

In breast cancer, platelet-derived growth factor (PDGF) beta-receptor expression significantly correlates with less favorable clinicopathological parameters and shorter survival [16]. Further study revealed that platelet-derived growth factor-D contributes to aggressiveness of breast cancer cells by up-regulating Notch and NF-κB signaling pathways [17]. Several clinical studies have observed the platelet activation in patients with breast cancer [18]. In line with previous findings, our study indirectly confirmed the results using a simple marker of platelet activation. These data are also consistent to the current knowledge that anti-platelet is considered to be a part of cancer adjuvant therapy [19].

A specific mechanism to explain the role of PDW in breast cancer remains to be determined. Bone marrow cells (including megakaryocytes) dys-regulation may contribute to changed PDW. Platelet distribution width is a measure of platelet heterogeneity. The heterogeneity in platelet volume is caused by heterogeneous demarcation of megakarocytes [20]. Platelet volume is determined both during megakaryopoiesis and during thrombopoiesis. Megakaryocytic maturation, platelet production and platelet size could be modulated by cytokines, such as interleukin-6 (IL-6), granulocytes colony stimulating factor (G-CSF) and macrophage colony stimulating factor (M-CSF) [21]. Increased interleukin-6 (IL-6) has been found in almost all types of tumors acting as a major cytokine in the tumour microenvironment. An increasing body of evidence suggests that IL-6 promotes tumorigenesis by regulating apoptosis, survival, proliferation, angiogenesis, metastasis and metabolism [22]. Furthermore, megakaryopoiesis and subsequent thrombopoiesis in cancer may be stimulated by the cytokines G-CSF and M-CSF, which could be secreted by tumor cells [23]. Another possible mechanism is that platelets play a crucial role in promoting the hypercoagulable state in cancer. Activated platelets create a procoagulant micro-environment that enables the tumor cells to cover themselves with platelets and evade the host immune system. Anandi VL et al demonstrated that platelet-activating factor promotes motility in breast cancer cells [24]. In addition, Toth B et al confirmed the key role of platelet-derived microparticles in the microenvironment of tumor tissue in breast cancer patients [25]. Those findings are consistent with our results that fibrinogen is elevated in patients with breast cancer.

BI-RADS category 0 is defined as an incomplete assessment and additional examination is necessary. Furthermore, a combination of ultrasonography and mammography is associated with a high rate of false-positive results [2]. However, for the diagnosis of breast cancer, few tumor markers are highly sensitive or specific. Our study revealed that the AUC values for discriminating breast cancer patients from benign breast masses were 0.680 for CEA to 0.810 for CA15-3, respectively. The combination of PDW, CA15-3, and fibrinogen increased the AUC to 0.900, significantly higher than those of any single marker. Moreover, CA15-3, PDW and fibrinogen levels are easily available in the clinical setting. Therefore, a combination of three serum markers is a more comprehensive parameter for breast cancer detection than single index in non-conclusive mammography patients.

In conclusion, the study showed that the combined use of CA15-3, PDW and fibrinogen may be clinically useful in discriminating between breast cancer and benign breast disease. Further studies are needed to validate these results in routine practice.

The records of 200 consecutive patients with breast cancer and 187 patients with benign breast disease who were admitted to Harbin Medical University Cancer Hospital, Harbin Medical University between Jan 2012 and Dec 2015 were reviewed. Patients meeting all of the following requirements were eligible for enrollment: (1) all patients with breast cancer undergone complete surgical resection and diagnosis was confirmed by histology; diagnosis of benign breast disease was based on breast biopsies; (2) untreated before diagnosis; (3) undergone mammography screening and Bi-RaDS result was 0; (4) measurement of CA15-3 and fibrinogen before surgery. Exclusion criteria included: pregnancy, breast-feeding or non-cancer-related illnesses that precluded surgical tumor resection, hematological disorders, coronary artery disease, hypertension, diabetes mellitus, and medical treatment with anticoagulant, statins, and acetylic salicylic acid. 187 patients with benign breast disease were matched for age, gender, body mass index (BMI), and smoking status.

Written informed consents were obtained from all patients. This study was approved by the Institutional Review Board of Harbin Medical University Cancer Hospital.

All the subjects underwent physical examination. Body mass index (BMI) was calculated as the ratio of weight (kg) to height squared (m2). Clinical data including smoking status, medical history and medication use were recorded for each subject. Venous blood samples after a 10-hour overnight fasting were collected from the individuals within 1 week prior to surgery. The serum carcinoembryonic antigen (CEA) and CA15-3 were measured using an automatic electrochemistry luminescence immunoassay system (ROCHE cobas 8000; Roche, Germany). Fibrinogen is assayed via Clauss method by the automatic coagulometer (Symex CS5100, Japan). Platelet indices were measured by an autoanalyzer (Sysmex XE-2100, Kobe, Japan). The whole blood samples were collected in EDTA-containing tubes, and all samples were processed within 30 minutes after blood collection. The inter- and intra-assays coefficients of variation (CVs) of all these assays were below 5%. The ideal cutoff values for the CEA, CA15-3, fibrinogen, MPV and PDW were determined applying receiver operating curve analysis. The cutoff values of CEA, CA15-3, fibrinogen, MPV and PDW were 1.17 ng/ml, 5.77 U/ml, 2.79 g/l, 9.6 fL, and 15.7 %, respectively.

18. Kedzierska M, Czernek U, Szydłowska-Pazera K, Potemski P, Piekarski J, Jeziorski A, Olas B. The changes of blood platelet activation in breast cancer patients before surgery, after surgery, and in various phases of the chemotherapy. Platelets. 2013; 24: 462-8.