PIK3CA mutations are frequent in gastric cancer. However, their pathological and clinical implications are still unclear. We analyzed the clinicopathological characteristics according to the PIK3CA mutation status of patients with stage IB–IV disease who underwent gastrectomy between May 2003 and Dec. 2005 (cohort 1; n = 302) and of those with stage IV disease who received gastrectomy between Jul. 2006 and Dec. 2012 (cohort 2; n = 120). PIK3CA mutations were detected in 40 patients (13.2%) in cohort 1. In these patients, PIK3CA-mutant tumors were more frequently located in the upper third of the stomach (p = 0.021) and significantly showed poorly differentiated histology (p = 0.018) and increased lymphatic (p = 0.015), vascular (p = 0.005), and perineural invasion (p = 0.026). In addition, these tumors showed significantly increased lymphocyte and neutrophil infiltration in cancer stroma (p < 0.001), Epstein–Barr virus positivity (p < 0.001), and microsatellite instability (p = 0.015). Cytoplasmic Akt expression was significantly increased in these tumors (p = 0.001). In cohort 2, PIK3CA mutations were identified in 15 patients (12.5%). PIK3CA-mutant tumors showed significantly increased vascular invasion (p = 0.019) and microsatellite instability (p = 0.041). In addition, cytoplasmic Akt expression was also significantly increased (p = 0.018). However, in both cohorts, PIK3CA mutations were not associated with the prognosis of patients. In conclusion, PIK3CA mutations were associated with increased tumor aggressiveness, especially in locoregional disease, and Akt activation in gastric cancer. Our data suggest that PIK3CA-mutated gastric cancer is a distinct disease entity, which might need a different therapeutic approach.

Phosphatidylinositol 3-kinase (PI3K)/Akt signaling pathway is important in cancer cell proliferation and survival [4]. PI3K contains regulatory p85 and catalytic p110 subunits. PIK3CA encodes p110α, an isoform of the PI3K catalytic subunit. PIK3CA somatic mutations are frequently present in various human cancers such as liver, breast, colon, ovary, and GC [5, 6]. Mutant PIK3CA promotes the proliferation and invasion of human cancer cells [7] and confers resistance against HER2-targeted therapy for breast cancer [8, 9], thus warranting further investigation as a potential therapeutic target. However, only limited data on GC are available at present. Available evidence suggests that PIK3CA mutations in GC are more frequent in Epstein–Barr virus (EBV)-positive and MSI (microsatellite instability) subtypes than in the other subtypes [2, 3, 10, 11]. The most frequently detected PIK3CA mutation is H1047R in exon 20 especially in MSI subtype of GC [2, 12]. However, pathological or clinical implications of PIK3CA mutations are still unclear [13]. These unclear data might be attributed to the small sample size and the heterogeneous patient populations in previous studies. Moreover, as the detection of genetic alterations using next generation sequencing is more commonly conducted, targeted agents focusing on PIK3CA mutations are expected to be tested with high priority in metastatic GC. However, there has been no study focusing on clinicopathological characteristics of PIK3CA mutations in patients with stage IV GC. In addition, we still do not know whether PIK3CA mutations have the same clinicopathological implications on patients with locoregional disease and those with distant metastasis.

In this study, we aimed to elucidate the implications of PIK3CA mutations on detailed pathological characteristics and clinical outcomes in patients with GC using two independent cohorts consisting of patients with resected stage IB–IV GC and those with stage IV disease who underwent palliative resection.

Table 1: Clinicopathological characteristics of patients in cohort 1 according to their PIK3CA mutation status

*Patients whose disease involved the entire stomach (n = 15) were excluded. 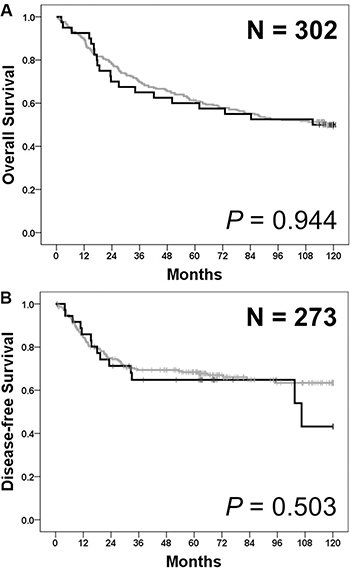 The same analyses were performed for 273 patients with stage IB–III tumors who had received curative surgery. The clinical and pathological characteristics of these patients according to their PIK3CA mutation status are compared in Supplementary Table 2. The results obtained from these patients were almost the same as those obtained for all the patients in cohort 1. Disease-free survival (DFS) after the radical surgery was not significantly different between patients with PIK3CA-mutant tumors and those with PIK3CA wild-type tumors (5-year DFS rate: 64.8% [mutant] vs. 68.4% [wild-type]; p = 0.503; Figure 1B).

In all, 120 patients were consecutively included. The male to female ratio was 77:43, and the median age was 58 years (range, 25–88 years). All the patients in cohort 2 had stage IV disease (distant metastasis) at diagnosis and underwent palliative gastrectomy. In addition, 104 patients (86.7%) in this cohort received palliative chemotherapy after the surgery.

Table 2: Clinicopathological characteristics of patients in cohort 2 according to their PIK3CA mutation status

*Patients whose disease involved the entire stomach (n = 1) were excluded. 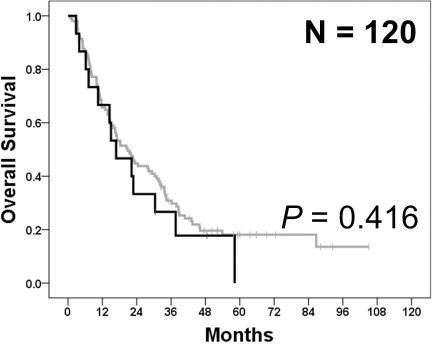 Figure 2: Overall survival according to PIK3CA mutation status in cohort 2. In cohort 2, overall survival was not significantly different between patients with PIK3CA-mutant tumors (black) and those with PIK3CA wild-type tumors (gray) (p = 0.416).

In cohort 1, PIK3CA-mutated tumors had significantly more aggressive features than PIK3CA wild-type tumors. However, in cohort 2, except vascular invasion, other aggressive characteristics in PIK3CA-mutated tumors in cohort 1 were not observed. Because all the patients in cohort 2 had stage IV disease, the proportion of tumors showing lymphatic, vascular, and perineural invasion was higher compared with cohort 1. Therefore, the effects of PIK3CA mutations on tumor aggressiveness in cohort 2 appear less distinct than those in cohort 1. The results suggest that PIK3CA mutations might be involved in the aggressiveness of GC in the locoregional stage, rather than in the metastatic stage. Previous studies have failed to identify the association due in part to the relatively small sample size [14–17]. Fang and colleagues showed that mutations in the PI3K/Akt pathway were more frequently present in intestinal-type tumors [10]. However, other characteristics associated with tumor aggressiveness, including lymphovascular invasion, were not significantly different according to the PI3K/Akt pathway mutation status. Barbi, et al. reported that although PIK3CA-mutant tumors were mostly in advanced T-stage, other characteristics of tumor aggressiveness were not significantly different according to PIK3CA mutation status [12].

Previous studies have uniformly reported that PIK3CA mutations are not associated with the prognosis of patients with GC [10, 12–17]. Our study demonstrated again that the PIK3CA mutations were not associated with poor survival outcomes in patients with GC, although PIK3CA-mutated tumors had more aggressive pathologic features. It is known that lymphatic, vascular, and perineural invasions, and poorly differentiated histology are related to poor prognosis [18–21], while MSI-H is a good prognostic factor in patients with GC [22–24]. Therefore, the coexistence of both good and poor prognostic factors in patients with PIK3CA mutations might explain the discrepancy between pathologic features and survival outcomes. In addition, it is also possible that, if PIK3CA mutation increases the aggressiveness of GC mainly in the locoregional stage, the mutation may not influence the prognosis of patients after appropriate radical surgery and adjuvant chemotherapy.

Mutant PIK3CA activates Akt pathways, which in turn promote the growth and invasion of cancer cells [7]. This mechanism has also been explored in GC [25]. In line with these results, we confirmed that PIK3CA mutations are associated with Akt activation in GC, thus promoting tumor aggressiveness. An aberrantly activated PI3K/Akt pathway in PIK3CA-mutated GC could be a potential therapeutic target in these patients. The PI3K/Akt pathway activates mammalian target of rapamycin (mTOR). An mTOR inhibitor everolimus has been investigated in patients with GC regardless of PIK3CA mutation status. In phase II studies, everolimus has shown promising clinical activity in patients with previously treated GC [26, 27]. However, a phase III trial GRANITE-1 failed to show the superiority of everolimus over placebo with respect to OS [28]. Nevertheless, a recent case report showed good treatment response to everolimus in a patient with GC harboring PIK3CA mutation and showing pS6 overexpression [29]. In addition, in vitro studies involving various cancer cell lines suggest that PIK3CA mutations are predictive markers of everolimus sensitivity [30, 31]. BKM120, a direct PIK3CA inhibitor, and BEZ234, a dual PIK3CA and mTOR inhibitor, exert pro-apoptotic effects on gastric and colorectal cancer cell lines [32]. Moreover, the anti-proliferative effects of everolimus were more potent in PIK3CA-mutated cell lines than in PIK3CA wild-type cell lines. Therefore, further clinical trials targeting PI3K/Akt pathway in GC should be conducted in selected patients such as PIK3CA-mutated ones, not all comers.

Our study has some limitations. First, although this is the largest study focused on the clinicopathological and prognostic implications of PIK3CA mutations in GC, in some analyses, the statistical power is still insufficient to draw strong conclusions due to the limited sample size. For example, a non-inferiority log rank test of OS with 262 patients with PIK3CA wild-type and 40 patients with PIK3CA mutant achieved 52.1% power at a 0.05 type I error to detect an equivalence hazard ratio of 1.50 in cohort 1, when we conducted a post hoc power calculation. Therefore, in further studies, a larger sample size is required to robustly validate all findings we observed. Second, since we analyzed relatively frequent and well renowned hotspot mutations in exons 1, 4, 7, 9, and 20 of the PIK3CA gene, the implications of relatively rare or non-hotspot PIK3CA mutations that were not covered in this study are still unknown. This limitation could be overcome by using the next generation sequencing methods in further studies.

In conclusion, PIK3CA mutations were associated with increased tumor aggressiveness, especially in locoregional disease, and Akt activation in GC. However, PIK3CA mutation status was not related to the prognosis of patients. Our data suggest that PIK3CA-mutated GC is a distinct disease entity, which might need a different therapeutic approach.

In cohort 1, patients with GC who underwent curative or palliative gastrectomy at Seoul National University Bundang Hospital (SNUBH) between May 2003 and Dec. 2005 were enrolled consecutively. Patients were excluded if they had stage IA (pT1N0M0) GC according to the 7th edition of the American Joint Committee on Cancer (AJCC) staging system. In cohort 2, patients with stage IV GC (distant metastasis) who underwent palliative gastrectomy at SNUBH between Jul. 2006 and Dec. 2012 were enrolled consecutively. Tissue microarrays were constructed by isolating representative 2-mm cores from surgical specimens by an experienced gastrointestinal pathologist. Baseline demographic, pathological, and clinical data, including DFS and OS, were collected by retrospectively reviewing electronic medical records of the patients. DFS was calculated from the date of the surgery to documented disease recurrence or death from any cause. OS was calculated from the date of the surgery to death from any cause.

IHC for Akt was performed using an antibody against Akt1 (dilution, 1:100; catalog no. ab32505; Abcam, Burlingame, CA, USA). Immunostaining was performed using Leica Bond-Max Automation and Leica Bond Polymer Detection Kit (Leica Biosystems, Bannockburn, IL, USA), according to the manufacturer’s recommendations. Sections were deparaffinized, and antigens were retrieved using pH 9.0 Bond Epitope Retrieval Solution 2. Slides were incubated with the primary antibody for 60 min, followed by incubation with the polymer for 8 min. After counterstaining, Akt expression in the cytoplasm of tumor cells was examined. Staining intensity was graded as follows: 0, negative; 1+, weakly positive; 2+, moderately positive; and 3+, strongly positive. In addition to staining intensity, area of positive cancer cells was scored. For statistical analysis, cytoplasmic AKT staining was regarded as positive if 5% or more cancer cells expressed it.

This study protocol was reviewed and approved by the institutional review board (IRB) of Seoul National University Hospital (IRB registration no. B-1407/260-305) and was conducted in accordance with the precepts established by the Declaration of Helsinki.

The authors declare that they do not have any conflicts of interest.

This study was supported in part by a research grant from the Seoul National University Bundang Hospital Research Fund (02-2015-009).