*These authors are considered as co-first authors

Figure 1: Knockdown of 1α(OH)ase leads to vitamin D3 depletion in L02 hepatocytes. Puromycin-selected stable L02 hepatocytes, expressing shRNA against human 1α-Hydroxylase [“sh-1α(OH)ase-1/-2”] or the scramble control shRNA (“sh-SCR”), were subjected to Western blotting assay (A) and qRT-PCR assay (B) to test 1α(OH)ase expression; Vitamin D3 content in the conditional medium was also analyzed (C). Relative 1α(OH)ase expression (vs. loading control ERK1/2) was quantified (A). Data were expressed as mean ± SD (n=5). * p <0.05 vs. “sh-SCR” cells. Experiments in this and all following figures were repeated three times, and similar results were obtained.

The aim of this study is to test the potential effect of vitamin D deficiency on insulin resistance. The 1α(OH)ase-silenced L02 hepatocytes (See Figure 1) were thereby treated with insulin. Western blotting assay was performed to test insulin signalings [15, 16]. Results in Figure 2A demonstrated that insulin (1 μg/mL, 10 min)-induced activation of downstream signalings, including IRS-1 (insulin receptor substrate-1), ERK1/2 and AKT, was largely inhibited with 1α(OH)ase knockdown. Phosphorylated (“p-”) IRS-1, p-AKT and p-ERK1/2 by insulin were all dramatically reduced in 1α(OH)ase-depleted L02 hepatocytes (Figure 2A). Expression of above total kinases was yet unchanged (Figure 2A). Quantified results summarizing three sets of repeated blot data further confirmed inhibition of insulin-induced IRS-1, ERK1/2 and AKT activations with 1α(OH)ase silence in L02 hepatocytes (Figure 2B). Meanwhile, as shown in Figure 2C, expression of glucose transporter 4 (GLUT4), a key glucose transporter protein, was also downregulated in 1α(OH)ase-silenced L02 hepatocytes (Figure 2C). Together, these results imply that knockdown of 1α(OH)ase might lead to insulin resistance in L02 hepatocytes. 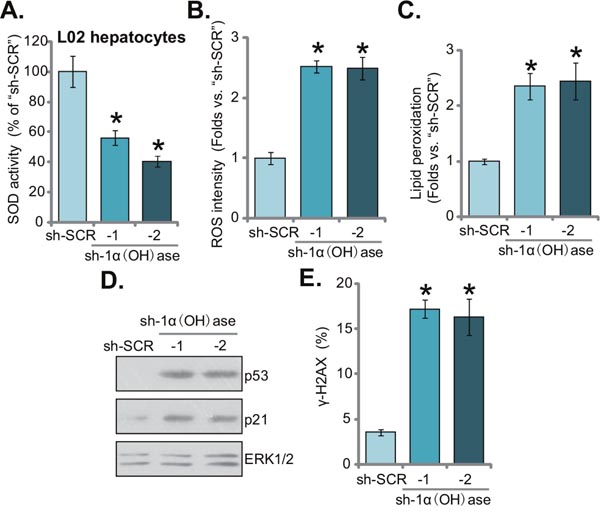 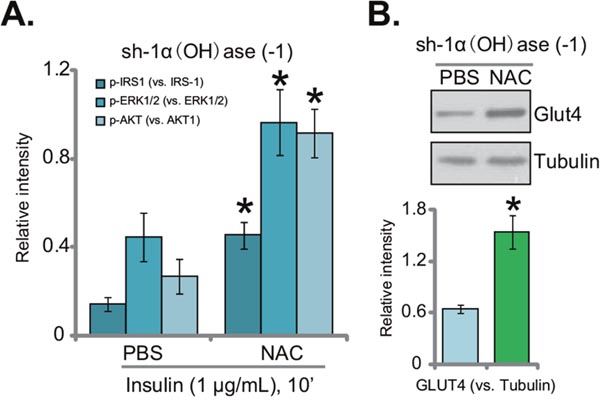 It has been proposed that vitamin D could increase the release of some anti-inflammatory cytokines, whiling decreasing the production of some pro-inflammatory cytokines [25, 30, 31]. Other studies, however, showed that vitamin D supplementation in humans showed no beneficial effect on inflammation [6]. Existing studies have also proposed vitamin D, especially its active D3 form, as an effective antioxidant [17, 18, 32, 33]. Systemic administration of vitamin D3 attenuated iron-induced oxidative damage in brains [17, 18, 32, 33]. Vitamin D3 could promote expression of several anti-oxidative genes, including γ-glutamyl transpeptidase (GGT), glutathione, glutathione peroxidase (GPx), and SOD, among others [17, 18, 32, 33]. On the other hand, vitamin D-deficiency would lead to oxidative stresses [17, 18, 32, 33].

Human L02 hepatocytes were provided by the Cell Bank of Shanghai Biological Institute (Shanghai, China). L02 cells were cultured in RPMI 1640 with 10% FBS and antibiotics, in a humidified atmosphere at 37 °C with 5% CO2. Cells were subjected to mycoplasma and microbial contamination examination every 2-3 months. Population doubling time, colony forming efficiency, and morphology were routinely checked to confirm the genotype.

The two lentiviral 1α(OH)ase shRNAs with non-overlapping sequences were designed and verified by Genepharm (Shanghai, China). The shRNA (10 μL/mL medium, per well) was added to L02 hepatocytes for 24 hours. Stable cells were selected by puromycin (0.5 μg/mL, Sigma) for a total of 10 days. Puromycin-containing medium was renewed every two days. Silence of 1α(OH)ase in the stable L02 hepatocytes was confirmed by both qRT-PCR assay and Western blotting assay. Control cells were infected with lentiviral scramble control shRNA (Santa Cruz Biotech).

The level of vitamin D3 in the conditional medium of L02 hepatocytes were tested via a commercial available enzyme linked fluorescent assay (ELFA) kit from Roche (Shanghai, China), according to the manufacturer's guidelines.

First, the lysis buffer (Biyuntian, Wuxi, China) was applied to achieve protein lysates from L02 hepatocytes. For each condition, 30 μg total lysate proteins per lane were separated by the SDS-PAGE gels (10-12%) [16, 38], which were then transferred to the polyvinylidene difluoride (PVDF, Millipore, Suzhou, China) membranes. Afterwards, the blots were blocked (in 10% of milk), and were incubated with designated primary and corresponding secondary antibodies. Enhanced chemiluminescence (ECL) reagents (Pierce, Nantong, China) were utilized to visual the interested bands [39–41]. Total gray of each band was quantified via the ImageJ software, and the value was normalized to that of loading control (ERK1/2 or β-Tubulin).

The superoxide dismutase (SOD) activity in L02 hepatocytes was assayed by the NWLSS kit, which is an extremely sensitive SOD kit, using WST-1 to generate a water-soluble formazan dye upon reduction with superoxide anion. The detailed procedure was described previously [42]. The final mixture was subjected to spectrophotometer detection at the absorbance at 560 nm.

ROS content was tested by the DCFH-DA fluorescent dye assay (Invitrogen). The detailed protocol was described in our previous studies [34, 35, 41]. Briefly, after applied treatment, L02 hepatocytes were incubated with 10 μM of DCFH-DA for 30 min under the dark, which were thereafter tested for fluorescence under a Fluorescence Microplate Reader (Synergy 2, BioTek, Winooski, VT).

As described previously [43], cellular lipid peroxidation was evaluated by the thiobarbituric acid reactive substances (TBAR) assay [44]. Briefly, after the indicated treatment, L02 hepatocytes protein lysates (20 μg per condition) were mixed with 20% of acetic acid and thiobarbituric acid solution. After heating, the mixtures were centrifuged, and then in the supernatant the red pigment dye was tested via a microplate reader. TBAR activity was expressed as nM of malondialdehyde per mg protein. The values of treatment group were always normalized to control.

γ-H2AX assay was performed to test DNA damage. Briefly, L02 hepatocytes were first trypsinized and fixed in ice-cold ethanol, which were then exposed to the anti-γ-H2AX antibody (Cellular Signaling Tech) for 6 hours. Cells were then incubated with the FITC-conjugated secondary antibody. FACS assay was performed to determine γ-H2AX percentage, as the quantitative measurement of DNA damage [45].

The results were expressed as mean ± standard deviation (SD). The statistical analysis among different groups was done using one-way ANOVA with Scheffe's test [46, 47].

The listed authors have no conflicts of interest.