Association between LMP2/LMP7 genetic variability and cancer susceptibility, especially among Asians: evidence from a meta-analysis

Low molecular mass protein (LMP) gene performs a critical role in the foreign antigen processing machine via the major histocompatibility complex-I (MHC-I) complex CD8+ cytotoxic T lymphocytes (CTL) pathway. Recent studies have reported the association of LMP2-60 G>A (rs17587) and LMP7-145 C>A (rs2071543) polymorphisms with various types of cancers, but the outcomes remained inconsistent. To obtain a reliable conclusion, we summarized available data and conducted a meta-analysis involving a total of 19 published studies. Evidences were obtained from the PubMed, Google Scholar, Web of Science and Chinese National Knowledge Infrastructure (CNKI) databases. The results demonstrated that the rs17587 and rs2071543 polymorphisms were associated with an increased cancer risk in the recessive and homozygote models. Stratified analyses by ethnicity indicated a significant association only in Asian population. Furthermore, rs17587 showed a greater susceptibility to gynecological cancers, while rs2071543 increased the risk of gastrointestinal and gynecological cancers. Our results indicate that the LMP2 rs17587 and LMP7 rs2071543 polymorphisms may act as risk factors for cancer, especially for Asian populations. Additional larger-scale multicenter studies should be performed to validate our results.

Currently, cancer is a major cause of human death and a public health problem that seriously threatens human health worldwide [1]. Large epidemiological and biological investigations have indicated that genetic and environmental factors contribute to tumourigenesis. However, the exact mechanisms of carcinogenesis have not been fully illuminated.

In recent years, many researches have confirmed that the elimination of cancer cell is promoted by the classical MHC-I-restricted T lymphocytes pathway [2, 3]. In this pathway, the CD8+ CTL could recognize the peptide antigen of cancer cell which is processed by LMP2/LMP7 molecules (GenBank Accession: X66401.1 GI: 34634) and presented by TAP1/TAP2 molecules (TAP, transporter associated with antigen presentation) [4]. The LMP/TAP system could recognize cancer antigen and act a pivotal role in immune surveillance via MHC-I molecule and CTL in the human host protective immunity [5, 6]. Therefore, the integrality of LMP2/LMP7 function played a restrictive effect on the processing of cancer cell antigen.

Previous researches indicated that the polymorphisms of LMP2- 60(G>A) and LMP7-145(C>A) would give rise to the functional alteration, and then impaired the capacity of antigen processing machine. As a consequence, LMP2/LMP7 gene variants were associated with development, occurrence and prognosis of many types of cancers, such as colorectal cancer, cervical cancer, gastric carcinoma and so on [7-16]. However, no consensus has yet been achieved, which was partially due to heterogeneity between cancer types, different ethnicities of patient cohorts, diverse genotyping methods and relatively small sample sizes. Accordingly, we conducted this meta-analysis to derive a more precise and up-to-date estimation of associations of LMP gene polymorphisms with cancer risk.

The flow chart of study selection process is shown in Figure 1. We identified 163 records, among which 10 publications appeared to be eligible and were retrieved in full texts [7-16]. Eventually, a total of 19 case-control studies from 10 publications (4360 cases and 4987 controls) were included in this study, and details of each study were recorded in Table 1. The eligible studies presented data for several different cancer types, including gastric cancer, cervical cancer, ovarian cancer, hematological malignancy, colorectal cancer and esophageal squamous cell carcinoma. Among these 19 studies, 11 were based on Asian populations [7-9, 14-16], 8 on Caucasian populations [10-13]. Furthermore, the genotyping methods utilized in the studies included PCR-RFLP (RFLP, restriction fragment length polymorphism), Taqman, Sequencing and ARMS-PCR (ARMS, amplification refractory mutation system). Quality assessment with Newcastle-Ottawa Scale (NOS) showed that 17 studies had a quality score higher than 7 points, and 2 studies had a quality score equal to 7 points (Table 1). 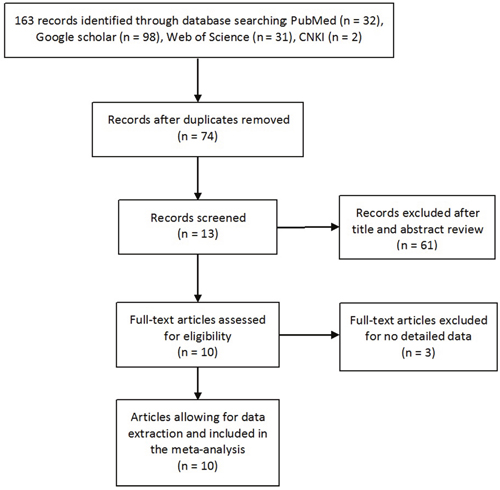 Meta-analysis of the LMP polymorphisms and cancer risk 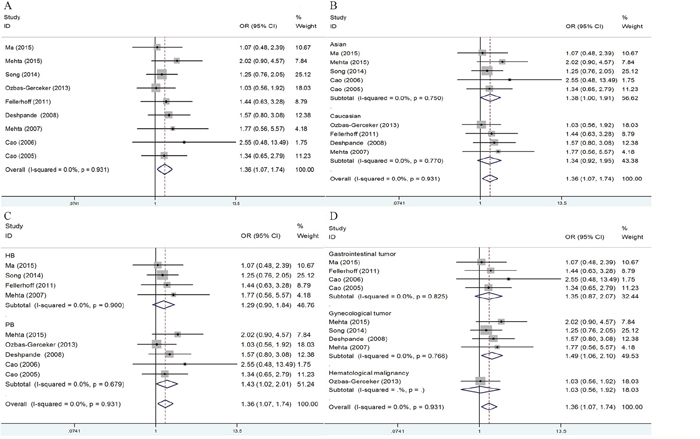 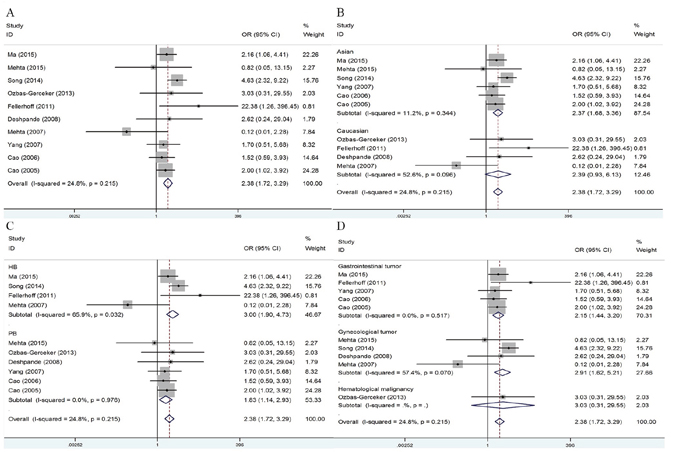 In this study, Chi-squared-based Q-statistic test was used to evaluate between-study heterogeneity that resulted from methodological or clinical dissimilarity across studies. As a result, heterogeneity between studies was not identified for rs17587 and rs2071543 under the homozygote and recessive models (P > 0.1) (Table 2).

To confirm the reliability of results, we further conducted sensitivity analyses by repeating the meta-analysis while sequentially omitting the studies included (one deleted at a time). The analysis outcomes demonstrated that no single study greatly influenced the overall cancer risk estimations with respect to the LMP polymorphisms. (Figure 4A–4B), suggesting that our results were robust.

Figure 4: Sensitivity analysis of cancer risk associated with rs17587 (A) and rs2071543 (B) polymorphisms under homozygous model.

Cancer cells can escape immune recognition via insufficient expression of peptides presented by the MHC, because HLA-mediated presentation of immunogenic cancer peptides class I is a prerequisite of a successful antitumor immune response [17]. Recent studies indicated a participation of the antigen processing machinery in carcinogenesis, such as in esophagus cancer [18], malignant melanoma [19], and hepatocellular carcinoma [20]. Two groups of proteins that participate in the antigen processing are LMPs and TAPs. Genetic polymorphisms of immunoproteasome subunits (LMP2, LMP7) and of transporter subunits (TAP1 and TAP2) are documented [21-23].

As a significant cause of population diversity, SNP is the most common type of human genetic variation correlated with cancer susceptibility [24]. Recently, much effort has been directed toward illuminating the role of LMP gene polymorphisms and their impacts on susceptibility to and progression of various diseases [7-16, 25]. Clarifying the association between LMP gene SNPs and cancer risk will help further illuminate the mechanisms underlying the carcinogenesis, which will in turn provide novel biomarkers for screening high-risk populations for cancer and improve the development of molecular-targeted therapy.

The current study is the very first meta-analysis of the association between LMP2/LMP7 polymorphisms and cancer risk. Analysis among all subjects suggested a significant increase in the risk of cancer associated with LMP2/LMP7. In our meta-analysis, the genetic heterogeneity between the selected studies was evaluated, and no significant heterogeneity was observed. All studies included were found homogeneous without any study disproportionately driving the combined estimates. In subgroup analysis of ethnicity, our results showed that both rs17587 and rs2071543 were correlated with cancer risk in Asian populations, but not in Caucasian populations. The differences between Asians and other races may be partly attribute to different genetic backgrounds, lifestyles or environments. Besides, when the stratification analyses were conducted by cancer types, we identified a significantly increased susceptibility to gynecological cancer for rs17587 polymorphism, to gastrointestinal and gynecological cancer for rs2071543.

Meta-analysis is a powerful method for analyzing cumulative data of studies where the single sample size is small and the statistical power is low [26]. However, several limitations of this meta-analysis should be acknowledged. To begin with, this analysis was based on unadjusted ORs because of a lack of information for several potential confounding variables. Secondly, due to the limited scope of databases, we cannot exclude the possibility of missing data. Additionally, more studies from all over the world should be performed to make our conclusions more persuasive.

Generally speaking, our meta-analysis manifests that LMP2/LMP7 polymorphisms (rs17587, rs2071543) are risk factors for cancer, and presence of the two polymorphisms in Asian population will increase their susceptibility to cancer. However, larger-scale multicenter studies are needed to further clarify the possible roles of the polymorphisms in the development of cancers.

The PubMed, Web of Science, Google Scholar and the China National Knowledge Infrastructure (CNKI) databases were searched for relevant studies up to April 14, 2017 in both English and Chinese through with the following terms and their combinations: “LMP2”, “LMP7”, “low molecular mass protein”, “polymorphism” or “variant”, “rs17587”, “rs2071543” and “cancer” or “tumor”. The reference lists of the retrieved studies were also screened to prevent the loss of any important data. All studies involved had to satisfy the following criteria: (a) case-control design was utilized; (b) studies focused on the association of LMP2/LMP7 polymorphisms with the risk of cancer; (c) published data must have been sufficient to allow OR estimation an odds ratio (OR) with a 95% CI. (d) for publications reporting the same data or overlapping data, only the largest or latest one was selected.

The studies quality was evaluated utilizing Newcastle-Ottawa Scale (NOS) for nonrandomized studies, including case-control and cohort studies [27]. NOS awards eight points to each case-control study (four for quality of selection, one for comparability, and three for quality of exposure). A study can be awarded a maximum of one star for each point within the selection and exposure categories, and a maximum of two stars for comparability. We considered studies with scores of more than 7 as high-quality studies, and those with scores of 7 or less as low-quality studies.

All analyses were performed using the Stata software, version 12.0 (Stata Corp., College Station, TX, USA). All P values were 2-sided and a P value <0.5 was regarded as statistically significant.

A sensitivity analysis was performed to assess the stability of final results by calculating the outcomes again by omitting one single study at a time. Begg’s funnel plots and Egger’s linear regression were adopted to evaluate the publication bias [30]. HWE was checked by the goodness-of-fit chi-square test and a P < 0.05 was regarded as statistically significant [31].

This work was supported by grants from the National Natural Science Foundation of China (81572337, 81672449 and 81402489), the Innovation Capability Development Project of Jiangsu Province (BM2015004), the Priority Academic Program Development of Jiangsu Higher Education Institutions (PAPD, JX10231801).