Clinicopathological significance of the p16 hypermethylation in multiple myeloma, a systematic review and meta-analysis

Multiple myeloma (MM) is a clonal hematological cancer formed by malignant plasma cells and overproduction of monoclonal immunoglobulin [1]. Over the past decade, a number of approved drugs such as lenalidomide, bortezomib and thalidomide have demonstrated significant clinical benefits in heavily pretreated MM patients [2–5]. Unfortunately, most of MM patients still relapse; the investigation of potential drug target and biomarker is still essential to enhance the survival rate in the patients with recurrent MM or those refractory to chemotherapy. Based on previous reports, several prognostic biomarkers including β2-microglo-bulin, serum albumin, hemoglobin and cytogenetic aberrations in MM have been used in clinical settings [6–9]. Epigenetic aberrations, such as hypermethylation of CpG islands located within the promoter region of the gene could lead to transcriptional repression/inactivation of the gene and participate in a crucial role in the development and progression of MM [10, 11]. The loss of function due to aberrantly methylated (hypermethylation) of CpG islands in tumor suppressor genes was observed in many cancers including MM, and the effect of which is equivalent to gene deletion and mutation in tumorigenesis. The p16 gene is one of the most common cancer suppression genes, which is hypermethylated in many tumors, including MM [12, 13].

The p16/INK4A/CDKN2 gene belongs to a family of cell cycle-related genes located on chromosome 9p21. It encodes a protein that competitively interacts with cyclin-dependent kinase 4 protein (Cdk4), which compromises the connection of cyclin D1 and Cdk4 to facilitate transition from the G1 phase to the next stage of the cell cycle [14]. The inactivation of the p16 gene is caused by hypermethylation in MM, the published positive rates of the p16 hypermethylation in MM are remarkably diverse [15–17]. The heterogeneous reported results do need for further investigation and evaluation of the correlation between the hypermethylation status of the p16 gene and MM. Therefore, a meta-analysis was conducted to quantitatively examine whether or not the epigenetic changes are indicated by a higher level of methylation of the p16 affecting clinical significance with MM.

Forty two articles were selected by the search method. The articles were excluded if they are reviews, in vitro or in vivo investigations, or studies unrelated to the topics. Finally, twenty four of articles were stripped out and this meta-analysis included nineteen studies (Figure 1). 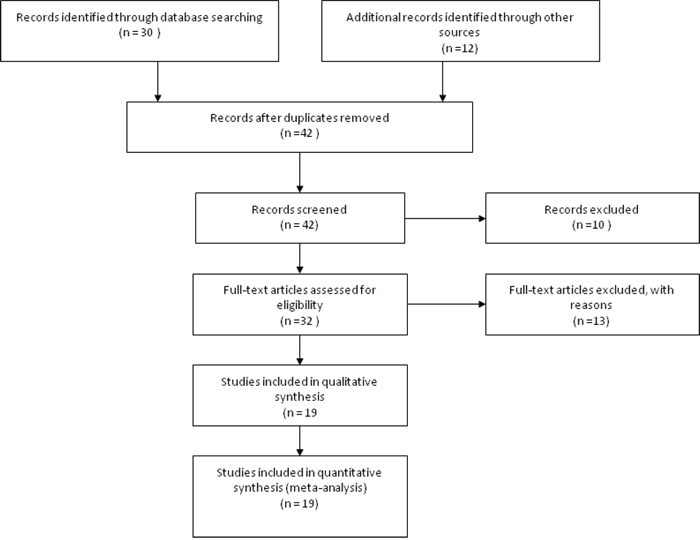 The p16 hypermethylation and clinicopathological characteristics 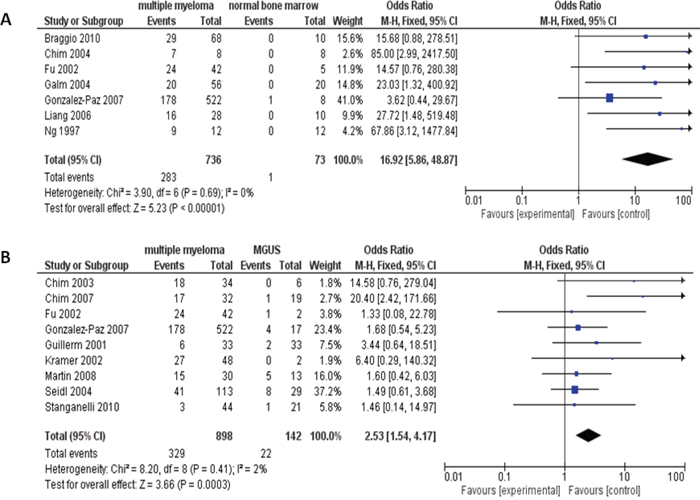 The p16 hypermethylation in the progression of MM

We then analyzed 382 MM patients pooled in 8 investigations to evaluate if the role of inactivation of the p16 via hypermethylation on the progression of MM. In Figure 3A, aberrant p16 hypermethylation is not remarkably higher in advanced MM (III) than that in early staged MM (I &II), OR=1.07, 95% CI=0.65-1.74, p=0.80. We further analyzed 239 MM patients pooled in 4 studies and found there is no significant difference between the level of the p16 hypermethylation in stage III and stage I, OR=0.52, CI=0.24-1.16, p=0.11, as presented in Figure 3B. These results indicate that the inactivation of the p16 gene due to hypermethylation may not play a critical role in MM development from initial stage to advanced stage. 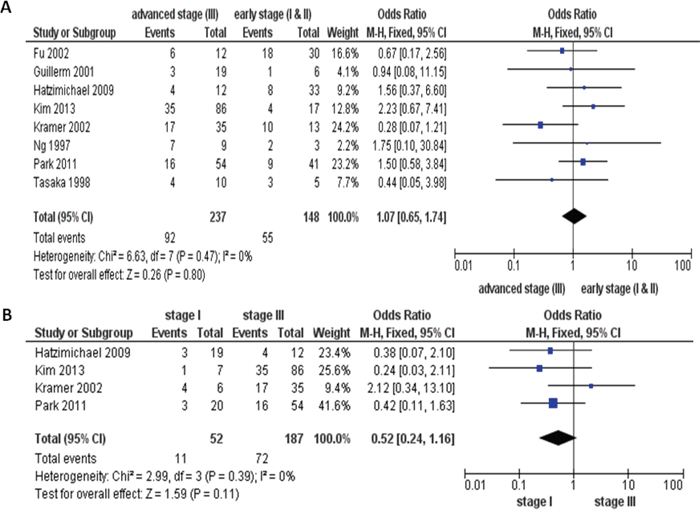 Prognostic significance of the p16 hypermethylation in MM

In the current study of the p16 hypermethylation and clinicopathological features using meta-analysis, the publication biases were evaluated by the funnel plots. The publication biases were ruled out by the symmetric funnel plot (Figure 5). The sensitivity analyses were conducted by removing one study at a time to determine the stability. The analysis results showed that the pooled ORs and HRs are not remarkably changed, suggesting the stability of these meta-analyses. 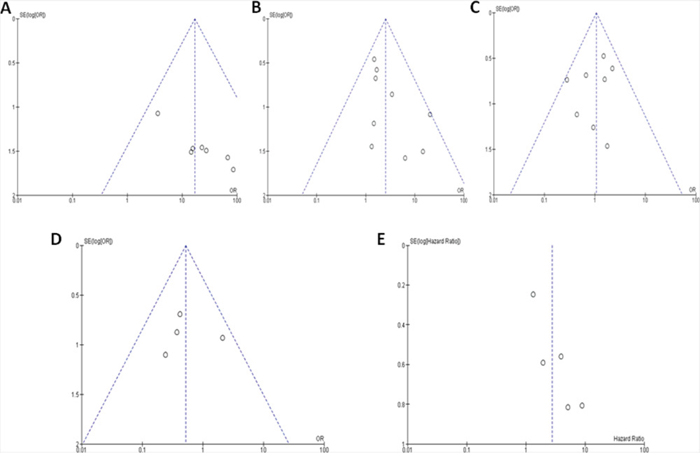 This study may have several potential limitations. The selection biases and unidentified confounders could not be completely excluded, since all of the included studies were experimental. Second, the identification of articles was based their publication only in English and Chinese, other articles with potentially meaningful data in other languages were not selected. Therefore, caution could be taken when our analysis are applied to the general populations.

We searched Embase, Pubmed and ISI web of knowledge to select studies from June 1, 1996 to February, 2017 using the search terms: “multiple myeloma”, “plasma cell myeloma”, and “Kahler's disease”, “methylation”, and “p16”. We also checked the reference lists of the reviews and selected articles for related articles. Although our article or publication search did not have language limits initially, we only took into account studies published in English and Chinese for full-text reading and final evaluations. After the exclusion of the redundant and non-relevant publications from the different databases, the remaining papers were evaluated in the full text version for in- and exclusion criteria. Authors’ references of included studies were also checked for other related investigations. All searched data were retrieved. The most complete investigation was included if the same patient populations were published in different resources.

Criteria for identification that an eligible study has to meet were as follows: (1) the p16 methylation and/or expression evaluated in primary MM, (2) the p16 methylation determined by polymerase chain reaction (PCR), (3) researches revealed the relationship between the p16 methylation and/or expression of MM clinicopathological parameters and prognosis, (4) studies which provided sufficient data to calculate Odds ratio (OR) and/or hazard ratio (HR) about overall survival (OS) and 95 % confidence interval (CI). The exclusion criteria: (1) reviews, letters, case studies, editorials, conference abstracts, expert opinion, (2) articles that had no information of OS or that could not calculate the HR about OS from the given information; and (3) all publications regarding in vitro/ex vivo studies, cell lines and human xenografts were also excluded. In addition, “aberrant” p16 methylation or p16 hypermethylation is defined by clear PCR product band detected by methylation specific PCR (MSP).

Two authors (HY, LY) independently reviewed and analyzed data from eligible studies. Two authors (YF, MG) evaluated all of publications according to the inclusion and exclusion criteria. The following criteria were chosen for each study: the first author name, year of publication, number of cases, sample source, methylation detection method, clinicopathological parameters, methylation rate, and/or expression, and follow up. Data for study characteristics were summarized in a table format. Investigation heterogeneity was evaluated to determine whether or not the data of the various studies could be analyzed for a meta-analysis.

Three investigators (LY, YF and LT) read through each publication independently for the methodological evaluation of the studies, and assessed and scored them according to REMARK guidelines and ELCWP quality scale [43, 44]. Then they provided the quality scores, compared them, and then reached a consensus value for each item.

Analysis was performed using the STATA 12.0 (Stata Corporation, TX, USA) and Review Manager 5.2 (Cochrane Collaboration, Oxford, UK). The pooled frequency of the p16 hypermethylation and 95% confidence intervals (95% CI) were estimated. The frequency of the p16 hypermethylation was compared in different tumor characteristics. Heterogeneity among studies was examined with Cochran’s Q test [45] and the I2 statistic [46, 47]. A fixed effect model was used to calculate parameters, when heterogeneity was not an issue (I2 values <50%), while a random-effects model was used to pool data and attempt to identify potential sources of heterogeneity based on subgroup analyses, if there was substantial heterogeneity (I2 values ≥50%). P values less than 0.05 were considered statistically significant.

Authors declare that they have no competing interests.