Obesity is involved in tumor progression. However, the corresponding mechanisms remain largely unknown. Here, we report that adipocytes increase the invasive ability of tumor cells by producing exosomes with a high level of MMP3. Compared with 3T3-L1 cells, 3T3-L1 adipocytes are enriched in MMP3 protein and can transfer MMP3 to 3LL lung cancer cells. Then, MMP3 activates MMP9 activity in 3LL cells and promotes invasion in vitro and in vivo via MMP9. Furthermore, MMP3 protein levels in lung tumor tissues from obese patients are increased compared with those of non-obese patients. In addition, MMP3 protein levels are positively correlated with MMP9 activity in tumor tissues. Therefore, our results reveal a novel mechanism in the adipocyte-derived exosome-mediated promotion of lung tumor metastasis, which extends our knowledge regarding obesity and tumor progression.

Lung cancer is the leading cause of cancer death among males in worldwide and has surpassed breast cancer as the leading cause of cancer death among females in more developed countries [1]. Despite advances in diagnosis, staging, surgical techniques, and neoadjuvant chemoradiotherapy over the last decade, the mortality rate of lung cancer remains high, and the 5-year survival rate is only 15% [2, 3]. Metastasis is the main cause of lung cancer therapy failure. Therefore, a further understanding of the mechanisms of lung cancer metastasis is urgently needed.

Obesity has been demonstrated to be positively associated with tumor metastasis [4–6]. Obesity contributes to ovarian cancer metastatic success by increasing lipogenesis, enhancing vascularity, and decreasing the infiltration of M1 macrophages [7]. The mature adipocyte-stimulated expression of CCL19 and CCL21 in lymphatic endothelial cell, and expression of their receptor CCR7 in melanoma cells, which contributes to increased lymph node metastasis of melanoma in high-fat diet-fed mice [8]. Human adipose tissue-derived stem cells promote breast cancer cell invasion in a CCL5-depedent fashion [9]. Obesity is also implicated in the increased metastasis of lung cancers. Mice fed a high-fat diet exhibit a significantly increased number and size of lung metastases compared with those fed a control diet [10]. Leptin, an adipocyte-derived cytokine associated with obesity, effectively enhances metastasis of the human lung cancer A549 cell line [11]. However, the mechanism by which obesity promotes lung cancer cell metastasis has yet to be explored.

Exosomes, which are 50 to 150 nm in diameter, are vesicles with a lipid bi-layer membrane structure that are released by a variety of live cells. Exosomes are released into the extracellular milieu when multi-vesicular bodies fuse with the cell membrane [12, 13]. When shuttled from a donor cell, an exosome can transfer a broad array of biological contents, including functional mRNAs, miRNAs, DNA fragments, lipids and proteins, to recipient cells [14]. Exosomes are a mediator of tumor metastasis. Exosomes from activated T cells promote tumor metastasis through upregulation of MMP9 protein levels in tumor cells via Fas signaling [15]. Exosomes release miR-126a from MDSC in response to doxorubicin treatment to promote lung metastasis [16]. Whether exosomes from adipocytes are involved in tumor metastasis remains unknown.

In this study, we evaluated the effect of 3T3-L1 adipocyte-derived exosomes (3T3-A-EXO) on murine 3LL Lewis lung cancer cells. We found that 3T3-A-EXO promotes 3LL tumor cell invasion in vitro through increasing MMP9 activity but not protein levels. In addition, 3T3-A-EXO is enriched in MMP3 mRNA and protein, which could be transferred into 3LL tumor cells. After transfer, MMP3 exhibited a robust ability to activate MMP9 and promote tumor metastasis in vivo.

Exosomes from 3T3-L1 cells (3T3-EXO) or 3T3-A-EXO isolated by sequential ultracentrifugation were first evaluated by nanoparticle tracking analysis technology, showing a vesicle population with a peak at 137 or 142 nm for 3T3-EXO or 3T3-A-EXO, respectively (Figure 1A). Electron analysis revealed a population of vesicles with a bi-layer membrane structure ranging from 50 to 150 nm in diameter (Figure 1B). The presence of several exosomal markers, such as CD63, TSG101 and Alix, in both exosomes were confirmed by Western blot analysis (Figure 1C). The absence of endoplasmic reticulum-residing protein GRP94 and Calnexin indicated the purity of exosomes (Figure 1C). 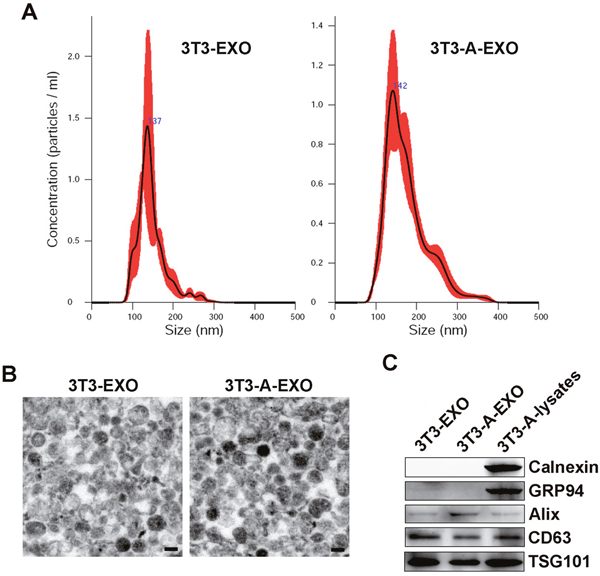 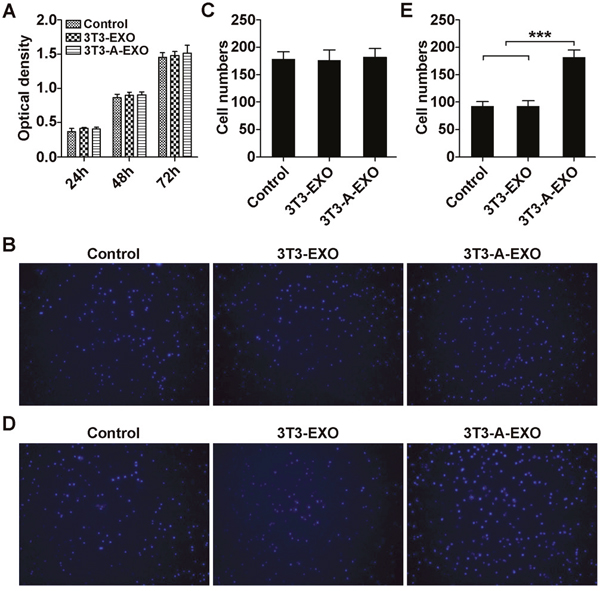 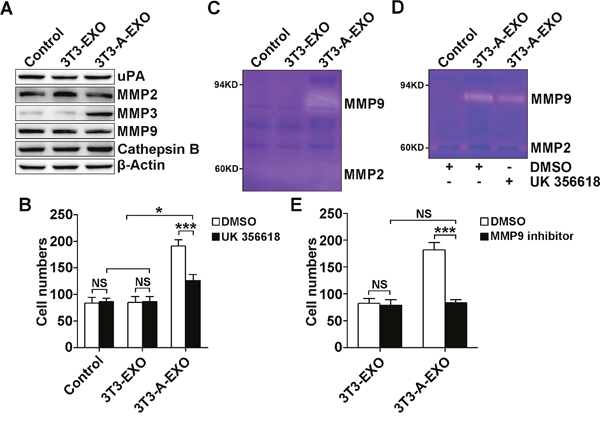 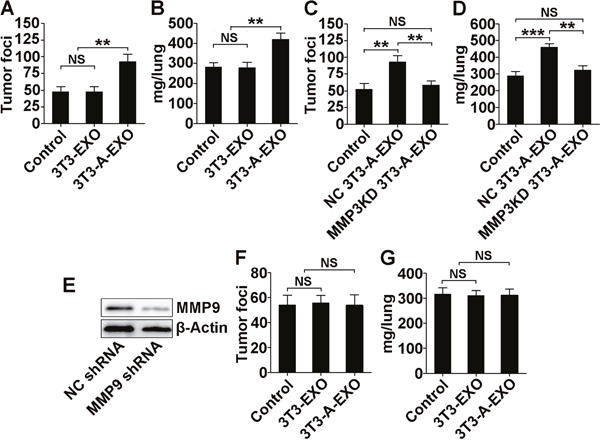 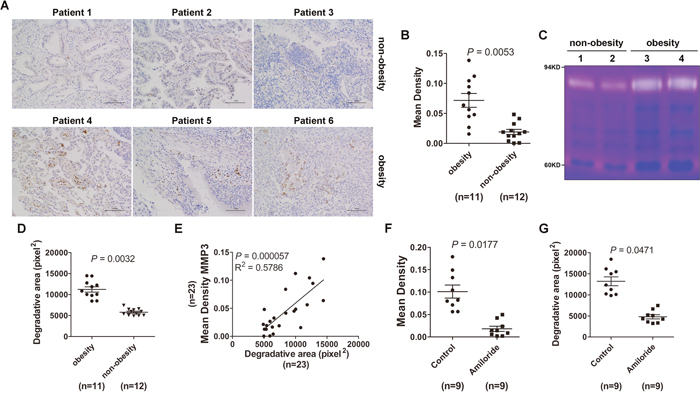 Although a positive correlation between obesity and tumor metastasis has been revealed, previous publications mainly focused on the role of obesity-related inflammation in the tumor metastasis [24–26]. In this study, we find that adipocytes are rich in MMP3 protein and can pass these proteins to their exosomes. After fusion with tumor cells, adipocyte-derived exosomes transfer MMP3 into tumor cells and enhance the invasive ability of tumor cells by activating MMP9. Therefore, our results indicate the important role of adipocyte-derived exosomes in obesity and tumor metastasis.

In addition, 3T3-A-EXO increased MMP3 protein level in 3LL tumor cells. However, treatment with the MMP3 inhibitor did not completely abrogate the increased invasive ability of 3T3-A-EXO-treated 3LL cells. This effect may be mediated by previously activated MMP9 by MMP3. In addition, MMP9 inhibitor treatment or MMP9 knockdown in 3LL tumor cells completely abolished 3T3-A-EXO-induced 3LL tumor cell invasion in vitro or in vivo, respectively. These results support the notion that MMP3 transferred by 3T3-A-EXO does not directly promote 3LL tumor cell invasion but requires the activation of MMP9. Although MMP3 mediates tumor metastasis [27–30], few publications suggest that MMP3 promotes tumor invasion by directly degrading the extracellular matrix. Given its specific role in activating pro-MMP-1, -3, -7, -8, -9 and -13 [31–33], the possibility that these effects are mediated by other MMPs activated by MMP3 cannot be excluded. Therefore, MMP3 likely weakly promotes tumor invasion by itself but mainly acts through activation of other MMPs, such as MMP9, in 3LL cells.

After inhibition of 3T3-A-EXO uptake by cytochalasin D, increased MMP9 activity in 3LL tumor cells could not be detected, suggesting that MMP3 in 3T3-A-EXO cannot directly induce MMP9 activation and fusion of 3T3-A-EXO and that 3LL tumor cells are required for this process. MMPs are subdivided into subgroups based on their substrate specificity and structural properties, including gelatinases (MMP-2 and 9); stromelysins (MMP-3, 10 and 11); collagenases (MMP-1, 8 and 13); matrilysins (MMP-7 and 26) and membrane-type MMPs (MMP-14, 15, 16, 17, 24 and 25) [34]. Because MMP3 is not membrane-type MMP, it must be packaged into exosomes. It is reasonable that 3T3-A-EXO must fuse with 3LL tumor cells. Then, MMP3 in 3T3-A-EXO is released to exert its functions.

In summary, MMP3 protein is enriched in 3T3-A-EXO and can be transferred into 3LL tumor cells by exosome and cell fusion. After transfer, MMP3 activates MMP9 in 3LL tumor cells, which improves the invasive ability of 3LL tumor cells. In addition, increased MMP3 protein levels and MMP9 activities are noted in tumor tissues from obese lung cancer patients, which may also result from exosome-mediating protein transfer. Thus, our findings decipher a novel mechanism for obesity and lung cancer metastasis, in which adipocyte-derived exosomes participate.

Female C57BL/6J and athymic nude mice (6-8 wk old) mice were purchased from Joint Ventures Sipper BK Experimental Animal Co. (Shanghai, China). Mice were housed in a specific pathogen-free facility, and the experimental protocols were approved by the Animal Care and Use Committee of School of Medicine, Zhejiang University (Hangzhou, China).

Human tumor tissues from obese and non-obese patients were obtained from the Zhejiang Cancer Hospital (body mass index greater than 27 was considered obese). The collection of human samples was approved by the local Ethical Committee and the Review Board of the Zhejiang Cancer Hospital. All the participants were informed of the usage of the samples, and consent forms were obtained.

Protein concentrations of exosomes or cell lysates were determined using the BCA assay, and equal amounts of proteins (20 μg) were separated on a 10% SDS-PAGE and electrotransferred onto a PVDF membrane. The membranes were blocked in Tris-buffered saline Tween containing 5% fat-free dry milk and then incubated with the corresponding primary antibodies overnight at 4°C followed by incubation with a horseradish peroxidase-conjugated secondary antibody for 1 h. Proteins were detected using enhanced chemiluminescence reagents.

Detection of cell growth in vitro

Lung tumor tissues from patients of the same quality were mechanically homogenized in 1 ml PBS followed by centrifugation at 12,000 × g for 15 min. The supernatants were collected for gelatin zymography assay.

Gelatin zymography was performed as previously described [39]. In general, supernatants were diluted 1:1 in non-reducing sample buffer and separated by sodium dodecyl sulfate polyacrylamide gel electrophoresis (SDS-PAGE) using an 8% polyacrylamide gel containing 1.5 mg/ml gelatin for 60 min at 85 V followed by an additional 60 min at 130 V. The gel was renatured by incubation with 2.5% Triton X-100 for 30 min at room temperature. The gels were washed for 30 min in developing buffer (50 mM Tris-HCl pH 8.0, 2.5 mM CaCl2) overnight at 37°C. Finally, gels were stained with 0.25% Coomassie brilliant blue R-250 for 45 min and then destained appropriately. The area degraded by MMP9 was quantified using ImageJ 1.8.0 software (NIH, Bethesda, MD, USA).

Briefly, 3LL cells were transduced with MMP-9 shRNA (m) lentiviral particles to silence MMP9 or with negative control particles according to the manufacturer’s instructions. After infection by lentiviral particles, 3LL cells were cultured in the presence of 1 μg/ml puromycin. The media was changed every 3 to 4 day, and puromycin-resistant cell clones were selected after assessing MMP9 downregulation by Western blot.

The lung tumor tissues from patients were fixed in 10% formalin, dehydrated in ethanol, and embedded in paraffin. Tissue sections were cut at 4 μm, mounted on slides and dried at 60°C for 4 h. Following short proteolytic digestion and a peroxidase block of the tissue slides using 2.5% hydrogen peroxide in methanol for 30 min at room temperature, the slides were incubated with the anti-MMP3 antibody overnight at 4°C. After washing, the slides were incubated with peroxidase-labeled polymer and substrate chromogen. Finally, the specimens were incubated in phosphate buffered saline containing diaminobenzidine for 5 min. An Olympus microscope was employed to visualize the staining of the tumor tissues. Images of the sections were captured, and positive areas were analyzed. The quantity of MMP3 was calculated as the mean density defined as the integrated optical density divided by the actual area.

There are no conflicts of interest to disclose.

This work was funded by the Medicine and Health Foundation of the Health Bureau of Zhejiang Province (2012KYA152), the Science and Technology Program of Hangzhou (20150733Q05) and National Natural Science Foundation of China (31400750).