Association between CD40 rs1883832 and immune-related diseases susceptibility: A meta-analysis

Background/objective: It has been reported that CD40 rs1883832 might be associated with immune-related diseases susceptibility. Owing to mixed and inconclusive results, we conducted a meta-analysis of case–control studies to summarize and clarify this association.

Methods/main results: A systematic search of studies on the association between CD40 rs1883832 and immune-related diseases susceptibility was conducted in databases. Odds ratios and 95% confidence intervals were used to pool the effect size. 40 articles were included in our meta-analysis.

CD40, expressed by some immune and non-immune cells, is a tumor necrosis factor receptor that plays a critical role in adaptive immunity. CD40 involves in B cell proliferation, the generation of plasma cells, B cell memory and the development of immature dendritic cells. [1–3] CD40 is an attractive candidate receptor for contributing to a variety of immune-related processes in which B and T cell activation play a role in pathogenesis [4].

Association between CD40 rs1883832 and immune-related diseases susceptibility has been studied in several populations. Sample sizes in these studies are relatively small. In Graves’ disease and Hashimoto’s thyroiditis, meta-analysis has been performed before, [6, 7] however new studies and more immune-related diseases need to be involved. Therefore, we decided to perform a meta-analysis of case–control studies to estimate it.

A systematic search in PubMed, Embase, Cochrane Library, clinicaltrials.gov, CNKI (China National Knowledge Infrastructure), WanFangData (one China database) and CQVIP (one China database) databases were carried out by two independent investigators. The following terms were used: “CD40 OR TNFRSF5 OR Bp50” AND “rs1883832 OR C/T-1 OR C>T-1 OR -1C/T OR -1C>T OR C-1T OR Kozak OR 5′-untranslated region OR 5′-utr”, without any limitation applied. The last search update was performed on August 4, 2016. References of related studies and reviews were also manually searched for additional studies. GWAS were searched in Immunobase.

Studies selected in this meta-analysis must meet the following inclusion criteria: (1) evaluation of the association between CD40 rs1883832 and immune-related diseases; (2) case-control study; (3) studies focusing on tissues of human beings; (4) detailed genotype data could be acquired to calculate the odds ratios (ORs) and 95% confidence intervals (95%CIs). Exclusion criteria: (1) duplication of previous publications (When there were multiple publications from the same population, only the largest study was included); (2) comment, review and editorial; (3) study without detailed genotype data; (4) GWAS; (5) studies focusing on cell lines. Dissertation thesis were included in the analysis.

Study selection was achieved by two investigators independently, according to the inclusion and exclusion criteria by screening the title, abstract and full-text. Any dispute was solved by discussion.

Two investigators extracted data of the eligible studies independently. In the case of a conflict, an agreement was reached by discussion. If the dissent still existed, the third investigator would be involved to adjudicate the disagreements. Try to contact the author by email for detailed genotype data.

The following contents were collected: first author’s surname, year of publication, disease type, the characteristics of cases and controls, source of control groups, country of origin, the detective sample, ethnicity, genotyping method, Hardy-Weinberg equilibrium, number of cases and controls for each genotype.

The qualities of included studies were evaluated independently by two investigators according to Newcastle-Ottawa Scale (NOS) [8] and the most important factor was ”age, gender and country”. Quality scores range from 0 to 9, and higher scores means better quality of the study. Disagreement was resolved through discussion.

Our meta-analysis was conducted according to the PRISMA checklists. [9] Hardy-Weinberg equilibrium (HWE) was evaluated for each study by Chi-square test in control groups, and P < 0.05 was considered as a significant departure from HWE. OR and 95% CIs were calculated to evaluate the strength of the association between CD40 rs1883832 and immune-related diseases. Pooled ORs were obtained from combination of single studies by allelic comparison (T vs C), dominant model (CT+TT vs CC), recessive model (TT vs CC+CT), homozygote comparison (TT vs CC) and heterozygote comparison (CT vs CC), respectively. The statistical significant level was determined by Z-test with P value less than 0.05.

Heterogeneity was evaluated by Q-test and I2 index. [10] When Q-test’s P-value was less than 0.10 and/or I2 index was more than 50%, the random-effects model (DerSimonian and Laird method) was used; otherwise, the fixed-effects model (Mantel and Haenszel method) was conducted. [11] Sensitivity analyses were performed towards each genetic model to evaluate effect of each study on combined ORs by sequentially excluding each study in total and in any subgroup including more than two studies. Besides, subgroup analyses were stratified by disease, ethnicity (Caucasian and Asian), control type (population-based and hospital-based) and HWE (P < 0.05 and P ≥ 0.05). Potential publication bias was checked by Begg’s funnel [12] plots and Egger’s test. [13] An asymmetric plot, the P value of Begg’s test (PB) less than 0.05, and the P value of Egger’s test (PE) less than 0.05 was considered a significant publication bias. All statistical analyses were performed with Stata 12.0 software (StataCorp, College Station, Texas, USA). A two-tailed P < 0.05 was considered significant except for specified conditions, where a certain P value was declared.

A total of 388 articles were acquired from databases (PubMed = 78, Embase = 98, Cochrane = 2, clinicaltrials.gov = 0, CNKI = 118, WanFangData = 79, CQVIP = 12, other sources (from manually search) = 1 [14]). The selection process was shown in Figure 1. 11 full-text articles were excluded (2 duplicate study [63, 64]; 3 detailed genotype data could not be extracted and might from the same population of another study [14–16]; 4 improper full text [17–20]; 2 might from the same population of a larger study [21, 22]). Finally, 40 articles [23–62] were included in our meta-analysis. The characteristics of each study were shown in Supplementary Table 1. Different genotyping methods were utilized including sequencing, PCR–RFLP, PCR-HRM, TaqMan PCR, MassARRAY. Blood samples were used for genotyping in all studies. 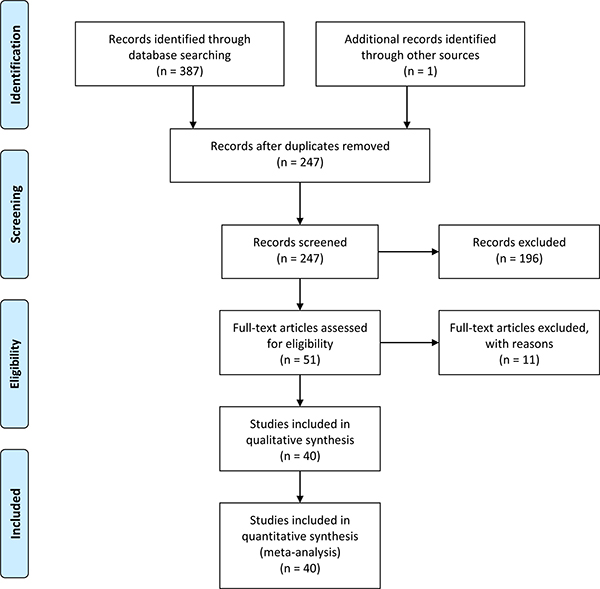 Table 1: Summary of pooled ORs in the meta-analysis 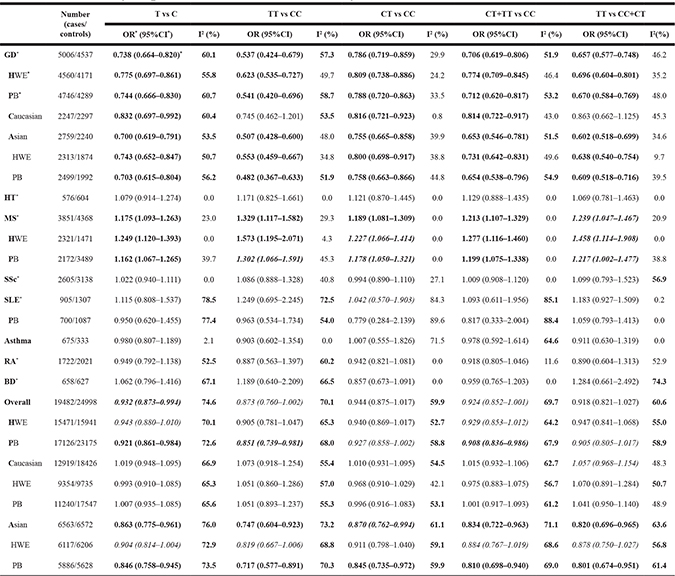 Because of the limited number of included studies, sensitivity analyses could not be performed in RA (rheumatoid arthritis), BD (Behçet’s disease) and PB subgroup of SLE.

In MS, 3851 cases/4368 controls were involved, and we found CD40 -1C>T was associated with increased risk of MS in 4 genetic models and the results showed stability and no publication bias. Similar stable results were found in its HWE and PB subgroups in allelic comparison (T vs C) and dominant model (CT+TT vs CC), however, publication bias analyses could not be performed. Our results in MS was consistent with the GWAS (OR: 1.0740; 95%CI: 1.0360–1.1140; P value: 1.19E-04) performed by IMSGC et al [65] in Caucasian.

Overall, because the association between CD40 -1C>T and GD conflicted with MS, the importance and scientific significance of the results decreased. Furthermore, 15 results were found unstable in sensitivity analyses and significant publication bias was found in 3 genetic models.

CD40 is expressed by some immune and non-immune cells. Thyroid follicular cells and orbital fibroblasts also express CD40 [66, 67]. Orbital fibroblasts are the target cells in Graves ophthalmopathy. In vitro studies demonstrated that the activation of CD40 on orbital fibroblasts leads to increased glycosaminoglycan productions, suggesting an important role in the pathogenesis of Graves’ ophthalmopathy [68]. The association between CD40 overactivation and GD has been firmly established. Transgenic mouse models constitutively overexpressing thyroidal CD40 develop more severe experimental autoimmune GD and thyrotoxicosis, whereas blockade of CD40 stimulation in experimental animal models suppresses progression to overt thyroiditis [69]. Similarly, functional blockade of CD40 with a murine antibody effectively prevents clinical expression in an animal model of multiple sclerosis. [70] CD40 -1C>T decreased the translational efficiency of CD40 transcripts, resulting in less CD40 protein level. However, our meta-analysis result and GWAS by IMSGC et al. [65] indicated that CD40 -1C>T is associated with increased risk of MS. Recently research showed that CD4(+) and CD8(+) Treg, which can be induced by CD40-activated B cells, play important roles in the maintenance of immune tolerance. The immune function of CD4(+)CD25(high) Tregs in MS patients significantly decreases as compared with normal controls. Adoptive transfer of CD8(+) Treg in rodents or induction of CD8(+) Treg in humans can prevent or treat autoimmune diseases. [71–73] It seems that different immune-related disease involves in different kind of disruption of immune balance.

Meanwhile, the limitations of this meta-analysis need to be addressed. To date, the number of available studies which can be included in this meta-analysis were small, especially available studies about HT, MS, SSc, SLE, Asthma, RA, BD, MG, CD, UC, Sarcoidosis, FUS, VKH, KD, GCA and ITP. Data for subgroup analyses were scanty. For example, gender subgroup analyses can not be done. For another example, the ethnicity in all studies of HT, SLE and Asthma were Asian, and in all studies of MS and SSc were Caucasian. Sensitivity analyses and publication bias analyses could not be performed in all subgroups. Some studies shared there controls with each other, like study NO.2 shared controls with NO.20, which were counted redundantly. (Detailed in Supplementary Table 1) Related studies published in other languages or unpublished were possibly missed.

30. Meng FT. Study on the association of a C/T SNP in the Kozak of the CD40 gene with Graves Disease. Harbin Medical University. 2006.