Cell-specific regulation of proliferation by Ano1/TMEM16A in breast cancer with different ER, PR, and HER2 status

Anoctamin 1 (Ano1, TMEM16A) is a novel calcium-activated chloride channel (CaCC) identified by three independent laboratories in 2008 [1-3]. Ano1 is involved in a variety of physiological functions including epithelial secretion, smooth muscle contraction, neuronal and cardiac excitation, and pain [4-7]. Ano1 has been implicated in many diseases such as cancer, hypertension, and cystic fibrosis [4, 8, 9]. Recently, Ano1 modulators with a relative high selectivity have been developed [10-12], and are believed to be potentially used for the treatment of these diseases [4].

Table 1 summarizes clinicopathological charac-teristics of 407 breast cancer patients. The median age of these patients was 51 years (range, 20-82 years). Most patients (83.8%) did not have a family history of breast cancer. The majority of these patients had a tumor with >2 cm in size, histological Grade 2, and Stage I or II. Of the 407 patients, 278 (68.3%), 275 (67.6%), and 96 (23.6%) patients were ER-negative, PR-negative and HER2-positive, respectively. Triple-negative breast cancer (TNBC) patients were only recorded in 63 (15.5%) of 407 patients. Of the 407 patients, 358 patients received anthracycline-based chemotherapy alone or in combination with paclitaxel, and 316 patients received tamoxifen treatment.

The expression of Ano1 and Ki67 in breast cancer 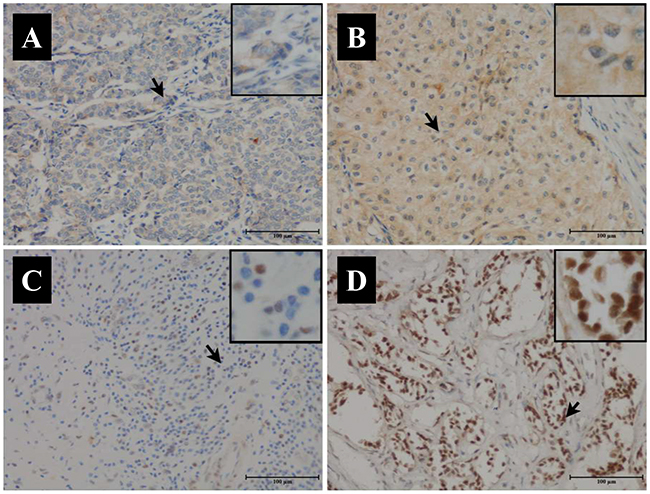 Figure 1: Representative immunohistochemical micrographs for the low (A, C) and high (B, D) expression of Ano1 (A, B) and Ki67 (C, D) in breast cancer samples. Arrows indicate the magnified regions in the insert. Magnification: ×100. Scale Bars: 100μm. 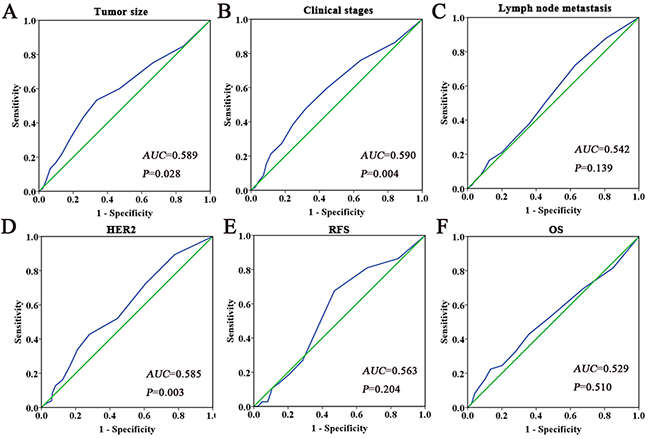 Figure 2: ROC curves were used to determine the cutoff score for the expression of Ano1 in breast cancer patients. The sensitivity and specificity for histological grade (A), clinical stage (B), lymph node metastasis (C), PR status (D), TNBC status (E), Ki67 status (F), tamoxifen treatment (G), and OS (H) were plotted for the expression of Ano1. The areas under curves (AUC) and P values were indicated. 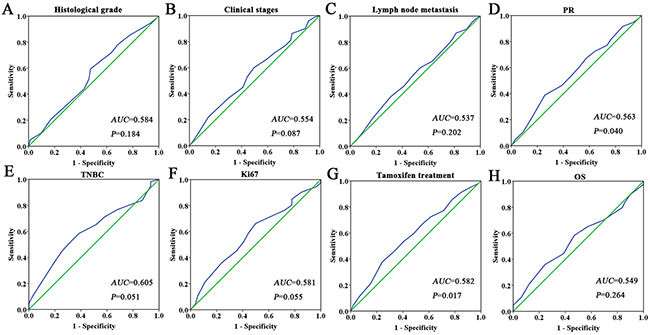 Figure 3: ROC curves were used to determine the cutoff score for the expression of Ki67 in breast cancer patients. The sensitivity and specificity for tumor size (A), clinical stage (B), lymph node metastasis (C), HER2 status (D), RFS (E), and OS (F) were plotted for the expression of Ano1. The areas under curves (AUC) and P values were indicated.

Table 2: The correlation analysis of Ano1 expression and Ki67 expression in patients with breast cancer.

Table 3: Association of Ano1 expression with Ki67 expression in breast cancer patients with different ER, PR, and HER2 status.

Table 4: Multivariate COX regression analysis of the association of Ano1 and Ki67 expression with DFS and OS in breast cancer patients.

Figure 6: Regulation of cell proliferation by Ano1. (A, and B) Representative western blot showing the expression of Ano1 in MCF7 cells (A) or MDA-MB-435S cells (B) transfected with Ano1 plasmids or empty vectors. b-actin was used as a loading control. (C) CCK-8 assay showing the cell viability in MCF7 cells or MDA-MB-435S cells transfected with Ano1 plasmid or empty vectors. *p<0.05. n=3. 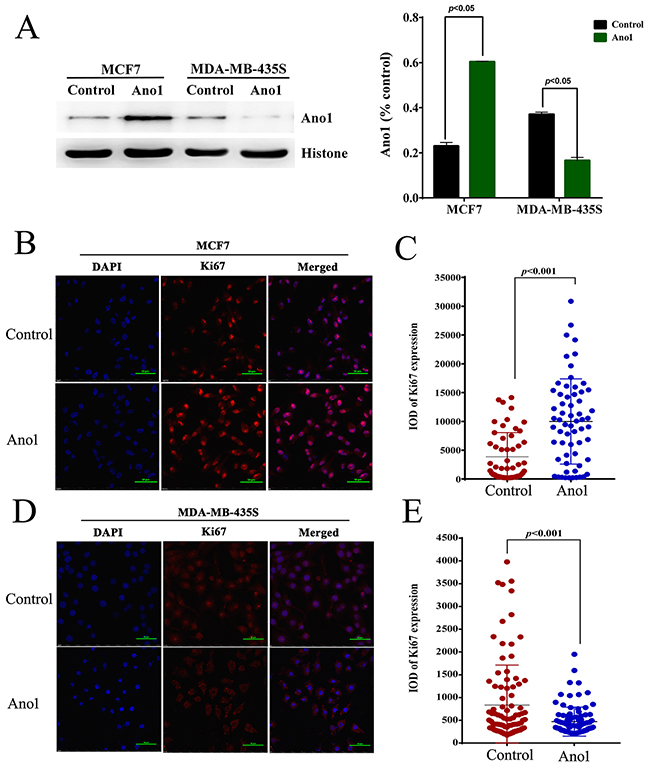 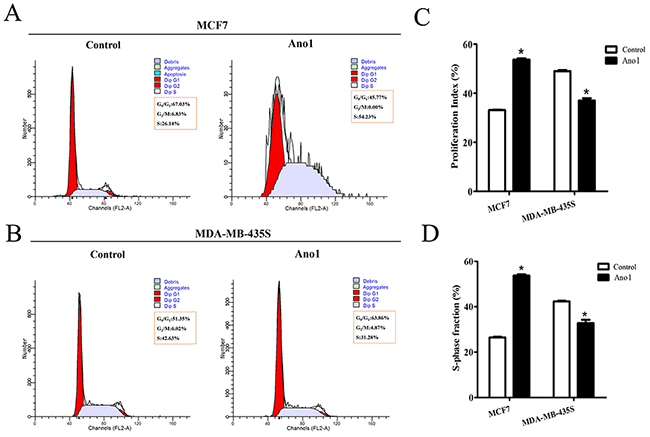 Human breast tissue samples were obtained from 407 female patients with sporadic breast cancer, who underwent surgery at the Department of Surgical Oncology and the Department of General Surgery at the First Hospital of China Medical University between January 2008 and December 2009. The diagnosis of breast cancer was histopathologically confirmed. The inclusion criteria for breast cancer patients were: 1) invasive ductal carcinoma (IDC) (n=396) and invasive lobular carcinoma (ILC) (n=11); 2) availability of complete clinical data and follow-up status; 3) breast cancer samples were collected for analysis; 4) breast cancer patients initially diagnosed at our hospital without a previous history of radiation therapy, chemotherapy, and hormonal therapy; and 5) patients who underwent surgical removal at our hospital and received postoperative chemotherapy and/or endocrine therapy. The exclusion criteria were: 1) incomplete clinical data; 2) ER, PR, and HER2 status were not tested, not recorded, or unknown; 3) HER2-positive status with 2+ immunostaining was not confirmed by fluorescent in situ hybridization (FISH); 4) patients who underwent postoperative radiation therapy; 5) patients who underwent adjuvant trastuzumab treatment; and 6) severe cardiovascular, pulmonary, renal, hepatic, and gastrointestinal diseases.

Clinicopathological data were retrospectively obtained from medical records. The following parameters were analyzed: patient age, menopausal status, family history, tumor size, histological grade, tumor stage, lymph node metastasis, ER status, PR status, HER2 status, and chemotherapeutic regimes. The histological grade of the cancer was determined according to the World Health Organization grading system. The stage of the cancer was evaluated according to the TNM staging system. ER, PR, and HER2 status were classified as positive and negative based on the immunohistochemistry (IHC) results in the medical records. ER-positive and PR-positive status were defined by >1% nuclear staining [37]. HER2 status was reported as follows: 0, 1+ for negative, 2+ for borderline, and 3+ for positive. HER2-immunostaining of 0-1+ and 3+ was defined as HER2-negative status and HER2-postive status, respectively. For tumors with HER2-immunostaining of 2+, FISH was performed to verify the positive status. HER2 gene amplification ratio of ≤2.2 and >2.2 by FISH was defined as HER2-negative, and HER2-postive status, respectively.

Paraffin donor blocks containing representative breast cancer samples were selected by reviewing the hematoxylin and eosin-stained slides. Tissue cores with a diameter of 1.5 mm were extracted from each donor block, and precisely arrayed into a new paraffin recipient block with a maximum of 200 cores, using the Organization Microarrayer (Pathology Devices, USA). Sections (4 μm thick) were obtained from formalin-ﬁxed and parafﬁn-embedded TMA blocks, mounted on poly-L-lysine-coated glass slides, and used for immunohistochemistry.

Immunohistochemistry was performed as previously described [19]. Briefly, sections were deparafﬁnized with xylene, rehydrated in a graded alcohol series, and washed in distilled water. Sections were then incubated in primary antibodies against Ano1 (Abcam Biotechnology, USA) or Ki67 (Abcam Biotechnology, USA) overnight at 4°C, followed by incubation with biotinylated secondary antibodies for 30 min at 37°C. The slides were then incubated with horseradish peroxidase-coupled streptavidin for additional 30 min (LSAB kit; Dako, Glostrup, Denmark), and stained with DAB (3, 3-diaminobenzidine). Sections were counterstained with hematoxylin, dehydrated, and mounted. Sections in which primary antibodies were replaced with normal rabbit IgG were used as negative controls.

The immunostaining was evaluated by two pathologists blinded to the experimental conditions. The intensity of immunoreactivity was scored as follows: 0 for no staining, 1 for weak staining, 2 for moderate staining, and 3 for strong staining. The proportion of tumor cells was calculated as the percentage of Ano1- or Ki67-immunopositive cells over the total tumor cells. Five sections were selected from each sample. For each section, five fields were randomly selected. Scores was assigned by using 5% increments (0%, 5%, 10%, …100%) as previously reported [19, 38, 39]. The average score for each sample was used for assessing cutoff score for overexpression of Ano1 or Ki67, using receiver operating characteristic curve (ROC). To generate ROC curves, the sensitivity and specificity for each outcome under study was plotted.

The MCF7 and MDA-MB-435S cell lines were obtained from the American Type Culture Collection (ATCC, USA). The cells were maintained in Dulbecco’s Modified Eagle Medium (DMEM, Invitrogen, USA) containing 10% fetal bovine serum (HyClone, USA), 100 U/ml penicillin, and 100 mg/ml streptomycin in 5% CO2 in a humidified incubator at 37 °C. Cells were subcultured every 3 days, and used for the following experiments.

Cells were homogenized in ice-cold lysis buffer after cell transfection for 48 h. Proteins were resolved by SDS–PAGE, and transferred onto polyvinylidene fluoride membranes by electroblotting. Membranes were blocked with 5% milk, and then incubated with primary antibodies against Ano1 (1:3,000, Abcam Biotechnology, USA) or Ki67 (1:500, Abcam Biotechnology, USA) overnight at 4 °C. β-actin or histone was used as a loading control. Membranes were then incubated with horseradish peroxidase-conjugated goat anti-rabbit secondary antibodies (dilution 1:5,000, Abcam, USA) at room temperature for 1 h. Bands were visualized using an enhanced chemiluminescence detection system (Amersham, Freiburg, Germany).

Cell viability was measured by using CCK-8 assay (Dojindo, JAPAN). After transfected with Ano1 or empty vectors, MCF7 or MDA-MB-435S cells (8,000 cells/well) were seeded into 96-well plates (Coring, Lowell, MA). Cells were allowed to grow in the growth medium for 48 h. Cells were then incubated with WST-8 (2-(2-methoxy-4-nitrophenyl)-3-(4-nitrophenyl)-5-(2,4-disulfophenyl)-2H-tetrazolium) for 2.5 h. Plates were read at 450 nm wavelength in a microplate reader (Anthos Labtec Instruments GmbH, Austria).

After transfected with Ano1 or empty vectors, cells were grown on glass coverslips in six-well plates until confluence. Cells were then rinsed with PBS, and fixed in 4% paraformaldehyde for 10 min at room temperature. Cells were permeabilized with 0.5% Triton-X-100 for 10 min, rinsed in PBS, and blocked with normal goat serum for 1 h at room temperature. Cells were then incubated with primary antibodies against Ki67 (Abcam Biotechnology, USA) (1:100 dilution) overnight at 4°C, followed by incubation with FITC-conjugated secondary antibodies (1:300 dilution; Invitrogen) for 1 h at room temperature. Cells were then counterstained with DAPI (4’,6- diamidino-2-phenylindole) for 15 min. The cells were examined and photographed under a confocal microscope (FV1000S-SIM/IX81, Olympus). Ki67-positive cells were defined as cells with the immunopositive staining in the nuclei. Integral optical density (IOP) was measured by using the IPP software (National Institutes of Health, USA).

After transfected with Ano1 or empty vectors for 48 h, MCF7 or MDA-MB-435S cells were harvested and washed twice with cold PBS. Cells were then fixed with 70% ethanol and stored at 4 °C overnight. After rehydration with PBS, cells were treated with 20 μl (2 μg/ml) RNase A and incubated at 37 °C for 30 min. Cells were then stained with propidium iodide (PI, 50 μg/ml) for 1 h at 4 °C. Cells were analyzed for cell cycle by flow cytometry, using a MACSQuant instrument (Miltenyi, Germany).

We gratefully appreciate the efforts and contributions of doctors, nurses, and technical staff at the First Hospital of China Medical University.

All authors declare no conflict of interest with regard to the submitted manuscript.