Dysregulation of long non-coding RNA zinc finger antisense 1 (ZFAS1) has been reported in many types of cancers. We performed a synthetic analysis to clarify its prognostic significance as a cancer molecular-marker. Several databases (including PubMed, Web of Science, Embase together with Wanfang and China National Knowledge Internet database) were retrieved to identify ZFAS1-related articles. A total of eight articles were included in this meta-analysis. Hazard ratios (HR) and 95% confidence intervals (CI) were applied to assess the association between ZFAS1 expression level and overall survival (OS). Odds ratios (OR) were calculated with RevMan 5.3 software to determine the relationship between ZFAS1 expression and clinicopathologic features. The pooled results of the meta-analysis indicated that high ZFAS1 expression level was positively correlated with poor OS (HR = 1.87, 95% CI: 1.38-2.36, p< 0.001) in human solid cancers. The statistical significance was also observed in subgroup analysis stratified by the cancer type, analysis method, sample size and follow-up time. Furthermore, the elevated ZFAS1 expression was significantly related to positive lymph node metastasis (OR = 4.18, 95% CI: 2.70-6.48, p< 0.001). The present results suggest that ZFAS1 might be served as a novel promising biomarker for prognosis in Chinese patients with solid cancers.

Cancer is a leading cause of mortality worldwide with 14.1 million newly diagnosed cases and 8.2 million deaths each year [1, 2]. Albeit some dramatic therapeutic advances have been developed, survival rate in 5 years was still poor for the majority of cancer patients since malignant progression [2]. Hence novel biomarkers for predicting clinical prognosis are critical and necessary for prognostic accuracy and therapeutic decision-making.

Long noncoding RNA (lncRNA) are mRNA-like transcripts with more than 200 nucleotides in length and incapable of protein synthesis [3]. Initially it was considered as the “noise” of transcriptions, however, nowadays it has attracted great attentions for its major regulatory roles in diverse biological processes and diseases [4–5]. Dysregulation of lncRNAs has been reported in cancers and it was correlated with evolution, progression and prognosis in many kinds of cancers, they appear to be potential new prognostic biomarkers in cancers [6–7].

ZFAS1, short for zinc finger antisense 1, has been a newly identified lncRNA [8]. It was over-expressed in various kinds of tumors, such as breast cancer, ovarian cancer and gastric cancer [9–11]. Located on the antisense strand of the Znfx1 promoter region, lncRNA ZFAS1 suggested up-regulated tumorigenesis and advanced cancer progression. ZFAS1 played an important role in tumor biological activities, including cancer growth, proliferation and metastasis. The expression of ZFAS1 also reported to be positively associated with clinical outcome and it might be served as a promising prognostic marker in certain cancers [12–13]. However, owing to the discrete outcome and limited sample size provided by individual studies, there has been still no consensus on the prognostic value of ZFAS1 in cancer patients. Therefore, this meta-analysis was performed to comprehensively elaborate the prognostic value of ZFAS1 as a candidate biomarker for human cancer.

A flow diagram of literature retrieval process was presented (Figure 1). Based on the standard of article selection, finally a total of 8 publications were included in this meta-analysis [12–19]. They have been all written in English and come from P. R. China. A total of 6 different types of cancer were included in present analysis, with 2 colorectal cancer, 2 gastric cancer, 1 hepatocellular carcinoma, 1 non-small cell lung cancer, 1 epithelial ovarian cancer and 1 glioma. The publication time of all included articles has been ranged from 2015 to 2017. The main characteristics were summarized (Table 1). The diagnosis of cancer was histopathologically confirmed. The expression level of lncRNA ZFAS1 was determined with qRT-PCR. There were three different cut-off points for the 8 included publications: 4 median level, 1 median ratio and 4 not reported. All included studies were assessed to be of high quality by the Newcastle-Ottawa Scale. 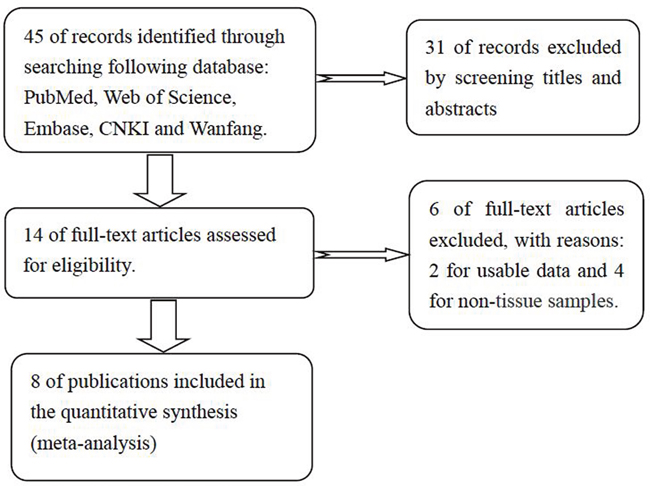 Table 1: The basic characteristics of all included studies in the meta-analysis

All included articles investigated the association between ZFAS1 expression and OS with a total of 978 cancer patients. Because there was no significant heterogeneity among studies (I2=0.0%, PQ=0.919), the fixed-effects model was applied to calculate the pooled HR with corresponding 95% CI. Meta-analysis of those studies revealed that high ZFAS1 expression level was positively associated with poor OS in human cancer (HR: 1.87, 95% CI: 1.38-2.36, p< 0.001) (Figure 2). 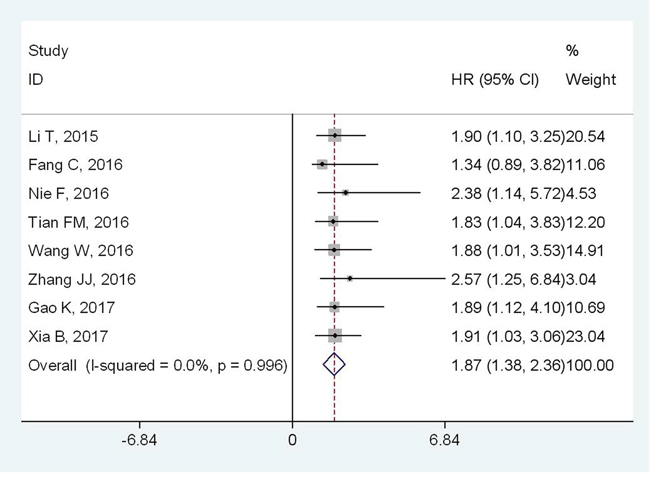 Figure 2: Forest plot showing the result of the pooled HRs of OS with overexpression of lncRNA ZFAS1 in different cancer types.

Table 2: Results of subgroup analysis of pooled HRs of OS of patients with overexpression of lncRNA ZFAS1 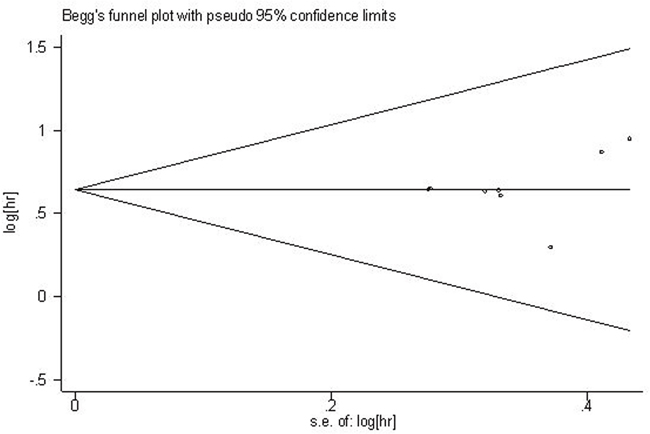 Figure 3: Funnel plot of the publication bias for the analysis of the pooled HRs of OS.

Sensitivity analysis was conducted to assess the effects of any single study on the overall outcome. After the exclusion of study, the pooled result was not significantly altered, suggesting the robustness of the results (Figure 4). 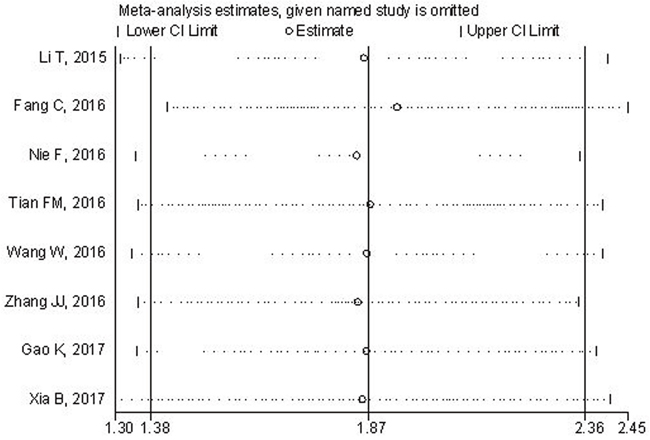 Figure 4: Sensitivity analysis of the pooled HRs of lncRNA ZFAS1 expression and OS.

Recently, increasing evidences revealed that lncRNAs play significant roles in various biological processes and various diseases [20–21]. Noteworthily, it found that lncRNAs were involved in tumorigenesis and tumor progression [22]. As emerging stars in cancer biomarkers, more and more lncRNAs were identified, and some functioned as oncogenes, such as CCAT2, HOTTIP and TUG1 [23–25], while some may be acted as tumor suppressor genes, such as MEG3, GAS5, ANRIL [26–28]. Aberrant expression of lncRNAs exerts impacts on the tumor biological processes and often correlated with aggressive progression and prognosis. Consequently, lncRNAs, as promising biomarkers for tumor prognosis and monitoring, have attracted great attentions [29–31].

LncRNA ZFAS1 is a newly identified lncRNA, which was originally reported by Askarian-Amiri et al. [8]. It reported that downregulation of ZFAS1 expression could promote cell proliferation, suggesting ZFAS1 as a putative tumor suppressor gene in breast cancer [8]. However, in some later researches, lncRNA ZFAS1 was reported to be up-regulated and regarded as an oncogene in tumorigenesis and progression. Although the roles of ZFAS1 in cancers are complex and still unclear, some research results have been obtained. In hepatocellular carcinoma (HCC), Li et al. [12] reported that ZFAS1 was frequently amplified in HCC and the upregulated expression of ZFAS1 could promote tumor metastasis in a miR-150-dependent manner and exert the tumor-promotive function. In colorectal cancer, lncRNA ZFAS1 may function as an oncogene by modulating ZEB1 to induce the expression of EMT [13], or combing with CDK1 and sponging with miR-590-3p to inhibit apoptosis [32]. It reported that ZFAS1 may be involved in the regulation of EMT in GC progression [11] and also could promote GC cells proliferation by epigenetically repressing KLF2 and NKD2 expression [14]. Additionally, ZFAS1 could exhibit a tumor oncogenic role by regulating EMT and Notch signaling pathway in glioma [18] and it facilitated ovarian cancer cell malignancy by participating in miR-150-5p/Sp1 axis [19].

Nevertheless, some limitations should be taken into account when interpreting our conclusions. First, the total numbers of cancer patients and included cancer types were relative small. Second, the cut-off value of ZFAS1 expression in included studies was not all the same. Third, all studies were from China and this might limit the applicability of our findings for other ethnic groups. Fourth, some studies included provided Kaplan-Meier curves for estimating the HR and 95%CIs, this might influence the accuracy of results. Fifth, positive results published more easily than negative results. Additionally, studies are needed to confirm the specific functions of ZFAS1 in different kinds of cancers.

In conclusion, upregulation of lncRNA ZFAS1 was associated with higher positive rate of LNM, more advanced clinical stage and poorer OS in cancer patients. Our results suggested that lncRNA ZFAS1 might serve as a novel molecular marker for clinical progression and prognosis for cancer patients in China. In the future, we still need further well-designed studies with larger sample and other ethnic groups to confirm its prognostic significance in cancers.

Relevant studies regarding to the prognostic significance of lncRNA ZFAS1 in human cancers were comprehensively searched via the following online databases: PubMed, Web of Science, Embase together with Wanfang and China National Knowledge Internet (CNKI) databases. Both free-text words and MeSH terminology were applied to maximize chances of securing the eligible articles. The searching terms were: “Zinc finger antisense 1”, “ZFAS1”, “lncRNA ZFAS1” and “long noncoding RNA ZFAS1”. The latest search was updated on February 10, 2017. Manual searches were also performed in the reference lists of primary articles. The full-text articles written in both English and Chinese were included in this meta-analysis.

For the survival data extraction, the data was directly applied if a study reported the detailed HRs and 95% CIs for survival. Otherwise, the HRs and 95% CIs was retrieved with Engauge Digitizer version 4.1(http://digitizer.sourceforge.net/) if a study only provide Kaplan-Meier curves. Any essential information not available from the original article were obtained by sending emails to contact the corresponding authors.

For the quality assessment, it was performed with Newcastle-Ottawa quality assessment scale (NOS) since all included studies were non-randomized studies. There was a score ranging from 0 to 9 points in the method. A study with a score ≥ 6 was regarded as high quality, suggesting lower risks of bias. In this meta-analysis, the quality scores of all included studies were varied from 6 to 9, with a mean value of 7.5.

The heterogeneity among studies was identified via I2 statistics and chi-square Q test. If there was significant heterogeneity between-studies (I2 ≥ 50% and PQ ≤ 0.05), the random effects model was adopted; When heterogeneity was not significant (I2 < 50% and PQ > 0.05), the fixed effects model was used. Subgroup analysis was performed to further assess the prognostic value of lncRNA ZFAS1 [33]. Sensitivity analysis were applied to evaluate the stability of the results. The publication bias was assessed with the Begg’s funnel plot and Egger’s test. Statistical significance was defined when the p-value was less than 0.05.

We thank for the financial support of National Natural Science Foundation of China (No.81560389).