Cellular Ca2+ signals play a critical role in cell physiology and pathology. In most non-excitable cells, store-operated Ca2+ entry (SOCE) is an important mechanism by which intracellular Ca2+ signaling is regulated. However, few drugs can selectively modulate SOCE. 2-Aminoethoxydiphenyl borate (2APB) and its analogs (DPB162 and DPB163) have been reported to inhibit SOCE. Here, we examined the effects of another 2-APB analog, DPB161 on SOCE in acutely-isolated rat submandibular cells. Both patch-clamp recordings and Ca2+ imaging showed that upon removal of extracellular Ca2+ ([Ca2+]o=0), rat submandibular cells were unable to maintain ACh-induced Ca2+ oscillations, but restoration of [Ca2+]o to refill Ca2+ stores enable recovery of these Ca2+ oscillations. However, addition of 50 μM DPB161 with [Ca2+]o to extracellular solution prevented the refilling of Ca2+ store. Fura-2 Ca2+ imaging showed that DPB161 inhibited SOCE in a concentration-dependent manner. After depleting Ca2+ stores by thapsigargin treatment, bath perfusion of 1 mM Ca2+ induced [Ca2+]i elevation in a manner that was prevented by DPB161. Collectively, these results show that the 2-APB analog DPB161 blocks SOCE in rat submandibular cells, suggesting that this compound can be developed as a pharmacological tool for the study of SOCE function and as a new therapeutic agent for treating SOCE-associated disorders.

Intracellular Ca2+ ([Ca2+]i) signals play critical roles in the modulation of cellular physiology and pathophysiology. In many non-excitable cells, intracellular Ca2+ signals respond to extracellular agonist stimulation in an oscillatory, rather than sustained, manner [1–3]. It is well accepted that two distinct intracellular Ca2+ pools, the inositol-1, 4, 5-trisphosphate (InsP3)-sensitive and ryanodine-sensitive pools, participate in the genesis of oscillatory Ca2+ signals [4]. In 1986, Putney presented a model for capacitive calcium (Ca2+) entry conveying that depletion of endoplasmic reticulum-stored Ca2+ leads to activation of plasma membrane Ca2+ channels that mediate influx of Ca2+ from the extracellular space into cells [5], in a process called store-operated Ca2+ entry (SOCE). Recent molecular studies have identified that stromal interaction molecule (STIM), the Ca2+ sensor of the intracellular compartments, together with Orai, the subunits of Ca2+ permeable channels on the plasma membrane [6], cooperate in regulating multiple cellular functions as diverse as proliferation, differentiation, migration and gene expression, demonstrating that SOC channels are important targets for normal cell function and a variety of diseases [7]. Unfortunately, there are few selective blockers for SOCE. There is a need to develop new compounds for SOCE as pharmacological tools for investigation and as therapeutic agents for diseases. 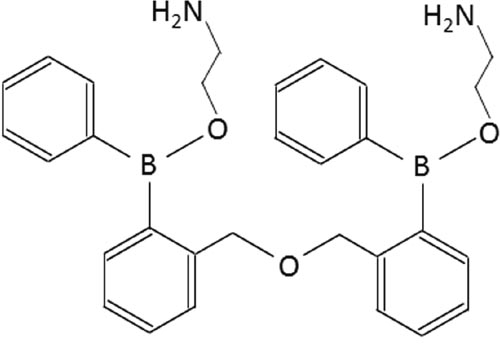 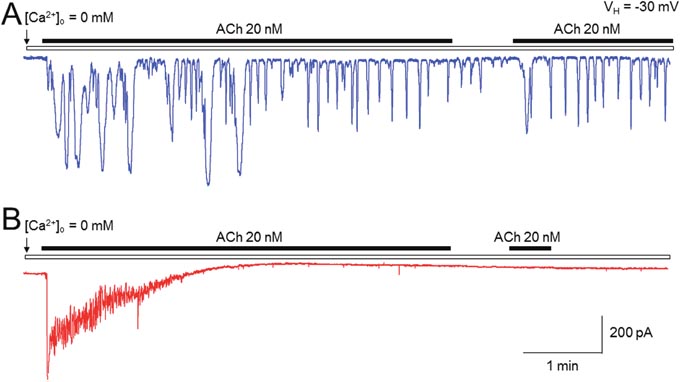 In these experiments, we characterized the effects of DPB161 on SOCE-dependent intracellular Ca2+ store refilling in rat submandibular cells. Under [Ca2+]o=0 conditions, bath-application of 20 nM ACh for 3-5 min induced an oscillatory response, which likely caused complete release of Ca2+ from the intracellular Ca2+ store since after washout of ACh for one min, reapplication of ACh failed to induce any oscillatory responses. Then, 1 mM Ca2+ was bath-applied to refill the Ca2+ store. Thereafter, we applied ACh again under [Ca2+]o=0 conditions and induced a Ca2+ response, suggesting that under [Ca2+]o=0 condition, the initial 20 nM ACh application emptied the Ca2+ store, and the subsequent bath-perfusion of 1 mM [Ca2+]o successfully refilled Ca2+ store (Figure 3A). When 50 μM DPB161 was included in the bath-perfusion with 1 mM [Ca2+], refilling of the Ca2+ store as prevented. Similar experimental results were obtained from 6 cells tested. These results suggest that DPB161 blocks SOCE (Figure 3B). 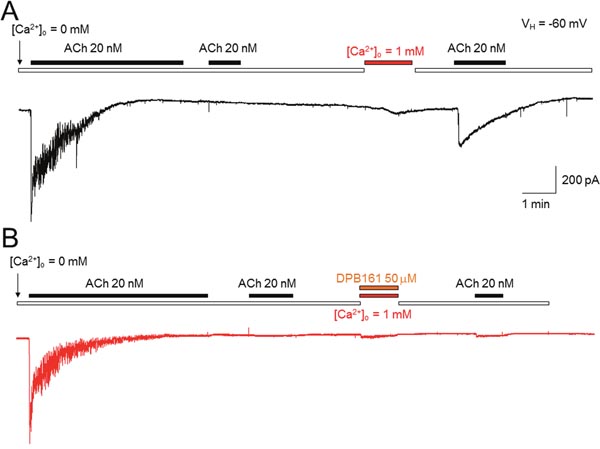 Figure 3: Effects of DPB-161 on [Ca2+]i responses to ACh measured by patch-clamp recordings in rat submandibular cells. (A) Under [Ca2+]o = 0 conditions, bath-application of 20 nM ACh induced Ca2+oscillatory response. Bath-application of 1 mM Ca2+ refills the Ca2+stores through opened SOC channels. (B) Using the same experimental protocol but refilling Ca2+ stores with 1 mM Ca2+ and 50 μM DBP161 prevented the refilling of Ca2+ stores, suggesting that DPB161 blocks SOCE. Typical traces in A and B are presented from 6 submandibular cells tested, respectively. 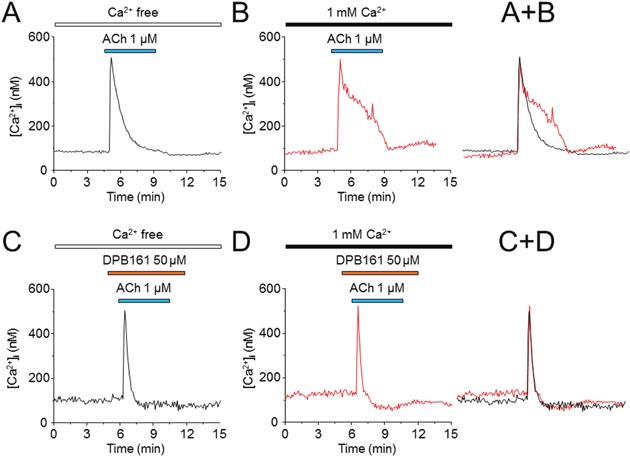 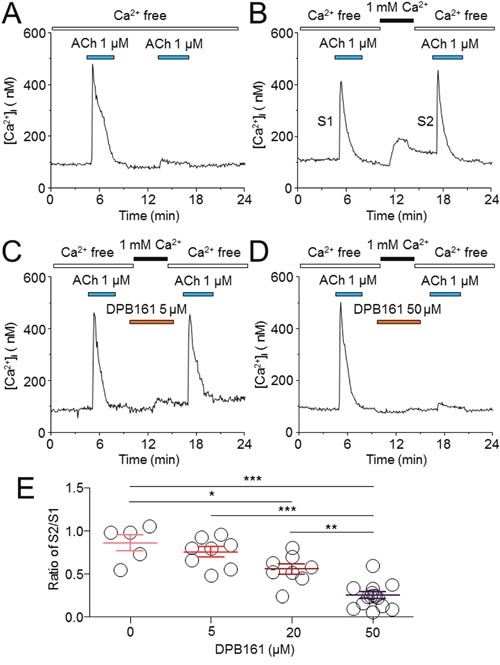 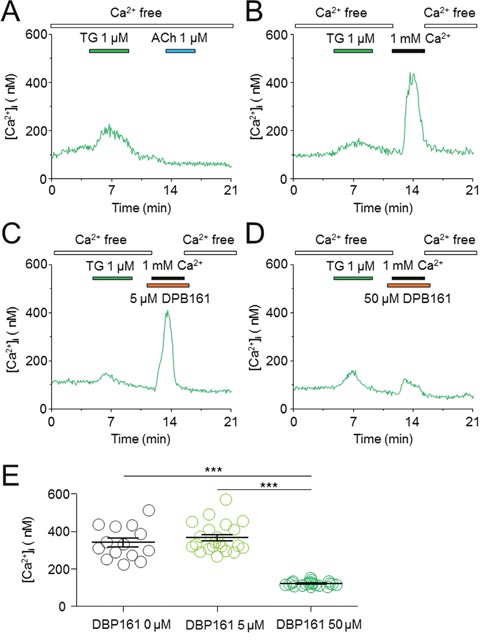 In the present study, we employed both patch-clamp recordings and Fura-2 Ca2+ imaging to examine the effects of a 2-APB analog, DPB161 on SOCE in freshly isolated rat submandibular cells. We demonstrate that DPB161 blocks rat submandibular cell SOCE in a concentration-dependent manner, suggesting that this 2-APB analog can serve as a pharmacological tool to investigate intracellular Ca2+ signaling mechanisms and provide a new therapeutic strategy for treatment of SOCE-associated diseases.

Under [Ca2+]o=0 conditions, we exposed cells to either ACh or thapsigargin to deplete Ca2+ stores and open SOC channels, and tested the effects of DPB161 on SOCE. Patch-clamp experiments showed that persistent exposure of ACh (20 nM) induces a short-lasting oscillatory response (measured Ca2+-dependent Cl- currents) under [Ca2+]o=0 conditions. This is due to the ACh has released all releasable Ca2+ from Ca2+ stores without extracellular Ca2+ refilling. After emptying Ca2+ stores, exposure to 1 mM external Ca2+ enables the refilling of Ca2+ stores and recovery of the 20 nM ACh-induced oscillatory responses (Figure 3A). We used this experimental protocol to examine the effect of DPB161 on Ca2+ refilling, and found that co-application of 50 μM DPB161 in the presence of 1 mM external Ca2+ prevents the refilling of Ca2+ stores as judged by the lack of a detectable ACh-induced response after attempting to refill Ca2+ stores in the presence of 50 μM DPB161 (Figure 3B). These data suggest that 50 μM DPB161 completely blocks SOCE in rat submandibular cells. Ca2+ imaging experiments comparing [Ca2+]i elevation by ACh in the presence and absence of external Ca2+ (1 mM) indicate that the duration of the [Ca2+]i response is remarkably short in the absence of extracellular Ca2+, suggesting that during ACh depletion of Ca2+ stores, the refilling of Ca2+ stores requires the presence of external Ca2+ (Figure 4A, 4B). Using the same protocol, but comparing 1 mM external Ca2+ plus 50 μM DPB161 perfusion vs. perfusion in the absence of external Ca2+, we find ACh induces similar waveforms of [Ca2+]i elevation when perfused with 50 μM DPB161 plus 1 mM external Ca2+, suggesting that DPB161 blocks SOCE. To qualitatively compare the concentration dependence of DPB161 on SOCE, we applied ACh twice under conditions with and without external Ca2+. Without external Ca2+, the second Ca2+ response is dramatically reduced (Figure 5A), whereas in the presence of external Ca2+, sequential applications of ACh (interval > 10 min) induces [Ca2+]i elevations of similar size (Figure 5B). In the presence of different concentrations of DPB161 during the second ACh application, the concentration-dependent reduction in the ratio of the second to the first peak amplitude of ACh-induced [Ca2+]i elevations under free extracellular Ca2+ conditions demonstrates that DPB161 blocks SOCE in a concentration-dependent manner (Figure 5E). Under [Ca2+]o =0 conditions, thapsigargin depletes Ca2+ stores and opens SOC channels enabling bath perfusion with 1 mM Ca2+ to increase [Ca2+]i through SOC channels. Co-application of DPB161 with 1 mM Ca2+ prevents SOCE-mediated [Ca2+]i elevation. Taken together, these results suggest that the 2APB analog, DPB161 inhibits SOCE in rat submandibular cells.

Previous work demonstrates that the 2APB analogs DPB162 and DPB163 potently block SOCE in cell lines, in which these 2-APB analogs show high affinity for blocking the SOCE [12, 20, 21]. We further demonstrate that another 2APB analog, DPB161 also inhibits SOCE in rat submandibular cells. However, the potency of SOCE inhibition by DPB161 in rat submandibular cells is lower. For example, 5 μM DPB161 fails to block SOCE elicited by ACh- or thapsigargin-induced depletion of Ca2+ stores. This suggests that the structure difference between DPB161 and the other 2APB analogs may partially explain the difference in its potency to block the SOCE. The IC50 values for SOCE inhibition by DPB161 are about 50-fold higher than DPB163 (1.7x10-1 vs. 5.9x10-2 μM) in InsP3 receptor-deficient DT40 cells [11], suggesting a lower affinity of DPB161 compared to DPB163 for inhibition of SOCE, which is consistent with the findings in the present study. However, the affinity of DPB161 for inhibition of the SOCE in native rat submandibular cells is much lower than that in InsP3 receptor-deficient DT40 cells. These lines of evidence suggest a diversity of SOCE in different cell types.

All experiments were performed in accordance with approved guidelines set and all experimental protocols were approved by the First Affiliated Hospital of Zhengzhou University, the Barrow Neurological Institute, and the Shantou University Medical College Ethical Committees.

Acute dissociation of rat submandibular cells was performed as described in our previous publication [19]. In brief, after isoflurane anesthesia, the fragments from adult Wistar rats (both genders) submandibular glands were minced and digested with collagenase (100 units/ml) for 15 min at 37°C. At the end of the collagenase digestion, the cell suspension was gently pipetted to obtain further separation of the cells. The cell suspension was then filtered through a 100 pm platinum mesh, washed twice with the extracellular solution containing 0.2% bovine serum albumin (BSA), and kept in the solution until use. A small amount of the cell suspension was added to a 2 ml-capacity experimental bath on a stage of an inverted microscope (Olympus IX7, Japan). The isolated cells usually adhered to the bottom within 15–20 min and were used for recording within 3 h after preparation. All experiments were performed at room temperature (22 ± 1°C). For the experiments, single cells were usually chosen, but in some cases, small clusters of three to five cells were also used.

Conventional whole-cell, patch-clamp recording was used to record the Ca2+-activated Cl− currents for monitoring intracellular Ca2+ signal oscillations, as reported previously [13, 17, 19]. The recording pipettes, made from borosilicate glass capillaries (Narishige, Japan), were pulled in two stages by a vertical microelectrode puller (P10, Narishige, Japan) to make patch-clamp electrodes. The tip resistance of the electrodes ranged from 4-6 MΩ when filled with 140 mM KC1-containing internal solution. After reaching a high seal resistance (> 2 GΩ), the whole-cell configuration was established by applying a brief negative suction. Transmembrane currents were recorded with a patch-clamp amplifier (Axopatch 200B; Molecular Devices; Sunnyvale, CA USA) at a holding potential (VH) of −60 mV. No series resistance was compensated in these experiments.

Isolated cells were preloaded with a standard external solution containing 2 μM Fura-2/AM (Invitrogen, Oregon, USA) for 40 min at 37°C. Ca2+ images were captured using an inverted fluorescence microscope (Olympus IX70, Japan) and a silicon intensifier target camera (Cool SNAPfx, Roper Scientific), and recorded on a fluorescence-imaging system (LAMBAD 10-2, Sutter Instrument Co, USA). For measurement of [Ca2+]i with Fura-2, the excitation wavelengths were 340 nm and 380 nm, a dichroic mirror of 440 nm and an emission filter of 510 nm were used. [Ca2+]i was calculated from the ratio (R) of the two fluorescence intensities, F340/F380 [22]. The change in [Ca2+]i was calculated by subtracting [Ca2+]i at the peak response level from that at the pre-stimulated level.

Cells were perfused continuously with a stream of the extracellular solution (~0.5 ml/min). A computer-controlled U-tube system was used for drug application (Huang et al., 2016). The reagents used for the present study were acetylcholine and thapsigargin (Sigma-Aldrich, St. Louis, MO), collagenase (Wako Chemicals, Japan), and Fura-2/AM (Invitrogen, Oregon, USA). The 2-APB analog DPB161 (Figure 1) was a gift from Professor Katsuhiko Mikoshiba.

For patch-clamp experiments, the Ca2+-activated Cl- current responses were presented as net charge (current area/Cm/min), then the drug-induced changes were normalized to the current response (induced by ACh) before testing drug (e.g., DPB161) exposure (Baseline). If data were obtained from the same recorded cell and the changes of ACh response were compared prior to, during and after testing drug exposure, a paired t-test was used. To analyze multiple effects (e.g., different concentrations), one-way ANOVA with Tukey’s post hoc tests were used.

Authors thank Professor Stanley Lin for his comments and carefully correction and edition of English.