Triple-negative breast cancer is characterized by the absence of estrogen and progesterone receptors and human epidermal growth factor receptor 2, and is associated with a poorer outcome than other subtypes of breast cancer. Moreover, there are no accurate prognostic genes or effective therapeutic targets, thereby necessitating continued intensive investigation. This study analyzed the genetic mutation landscape in 70 patients with triple-negative breast cancer by targeted exome sequencing of tumor and matched normal samples. Sequencing showed that more than 50% of these patients had deleterious mutations and homozygous deletions of DNA repair genes, such as ATM, BRCA1, BRCA2, WRN, and CHEK2. These findings suggested that a large number of patients with triple-negative breast cancer have impaired DNA repair function and that therefore a poly ADP-ribose polymerase inhibitor may be an effective drug in the treatment of this disease. Notably, homozygous deletion of three genes, EPHA5, MITF, and ACSL3, was significantly associated with an increased risk of recurrence or distant metastasis in adjuvant chemotherapy-treated patients.

Breast cancer is one of the most prevalent cancers worldwide, with over 1,300,000 newly diagnosed patients and 450,000 deaths each year [1]. Breast cancer is a highly heterogeneous disease with diverse pathophysiological and clinical features that can be caused by distinct genetic, epigenetic, and transcriptomic changes. Based on expression of estrogen receptor (ER), progesterone receptor (PR), and human epidermal growth factor receptor 2 (HER2), breast cancer can be categorized into three subtypes: hormone receptor-positive (ER+ or PR+), HER2-positive (ER-, PR-, and HER2+), and triple-negative breast cancer (TNBC) (ER-, PR-, and HER-) types [2, 3]. TNBC accounts for approximately 10–20% of invasive breast cancers, and the mortality rate of women with TNBC during the 5 years after diagnosis is high [4, 5]. Based on ethnicity, breast cancer incidence rates are higher in Caucasian than in African-American, Hispanic, and Asian women. However, aggressive and advanced-stage breast cancer diagnosed at an early age, in particular TNBC, is more frequent in African-American than in Caucasian women [6].

Although agents targeting hormone receptors and HER2 can be used to treat hormone receptor-positive and HER2-positive types of breast cancer, these agents are ineffective against TNBC because of the absence of the targeted receptors (ER, PR, and HER2) [7, 8]. Despite several pioneering genome-wide studies that aimed to identify diagnostic and therapeutic biomarkers in TNBC, there has been no comprehensive effort to date that has attempted to identify TNBC biomarkers in the Korean population [9–11]. Because there is no conventional therapy targeting TNBC, studies that intensively evaluate genomic alterations are essential to identify novel prognostic biomarkers and/or therapeutic targets for TNBC.

This study was designed to characterize the somatic mutation profiles of 368 cancer-associated genes in 70 Korean patients with TNBC and to identify novel somatic mutations and potential prognostic genes. We found that more than half of the patients in our cohort had deleterious mutations in several DNA repair-related genes, suggesting that poly ADP-ribose polymerase (PARP) inhibitors may be effective in treating patients with TNBC therapy. Moreover, we identified three candidate prognostic genes whose homozygous deletions were significantly associated with the prognosis of patients who had been treated with adjuvant chemotherapy.

Clinicopathological characteristics of the 70 patients with TNBC included in this study are described in Table 1. Of these patients, 15 (21%) experienced tumor recurrence, including eight with distant metastases. The mean follow-up period was 4.88 years. We determined whether clinicopathological factors, such as age, primary tumor stage (pT), and lymph node metastasis, were associated with patient outcomes, including disease-free survival (DFS) and distant metastasis-free survival (DMFS), finding no evidence of association between these factors and either DFS or DMFS (Supplementary Table 1).

The average target coverage depths were 130.36× for tumor samples and 139.71× for normal samples, and target regions with read coverage depths >2× and >100× accounted for over 93% and over 40%, respectively, of the entire target region (Supplementary Table 2). Analysis showed 292 somatic single nucleotide variants (SNVs) and 30 somatic small insertions and deletions (INDELs) in 157 genes. Of these variants, 238 mutations were novel SNVs or INDELs that had not been reported previously in either the COSMIC or dbSNP database (Figure 1A, Supplementary Table 3). Supplementary Table 4 lists all somatic SNVs and INDELs, whereas Tables 2 and 3 list frequently mutated genes and somatic SNVs and INDELs, respectively. Of the 70 patients, five (7%) had stop-gain mutations and six (9%) had frameshift mutations in TP53. Frameshift mutations were also detected in four other genes, GNAS, ARID2, JUN, and MYCL1 (Figure 2). Sanger capillary sequencing validated two somatic mutations in TP53 (c.637C>T and c.578A>G; Supplementary Figure 1). 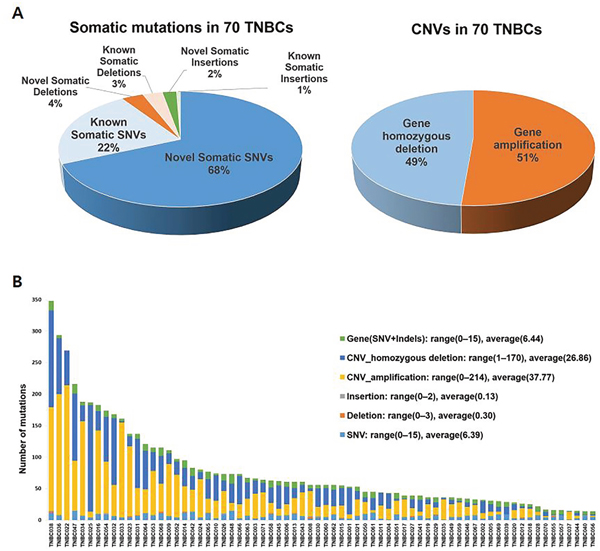 Figure 1: Somatic SNVs and CNVs in genomes of 70 Korean patients with TNBC. (A) Percentages of types of somatic mutations, showing that a high percentage consisted of novel somatic SNVs. (B) Numbers of somatic SNVs and CNVs in individual patients. The numbers of genes with homozygous deletions per patient ranged from 1 to 170, whereas the numbers of amplified genes per patient ranged from 0 to 214. SNVs, single nucleotide variants; CNVs, copy number variations; TNBC, triple-negative breast cancer.

Table 2: List of the most frequently mutated genes in the 70 patients with triple-negative breast cancer

Table 3: List of the most frequently identified somatic mutations in 70 Korean patients with triple-negative breast cancer 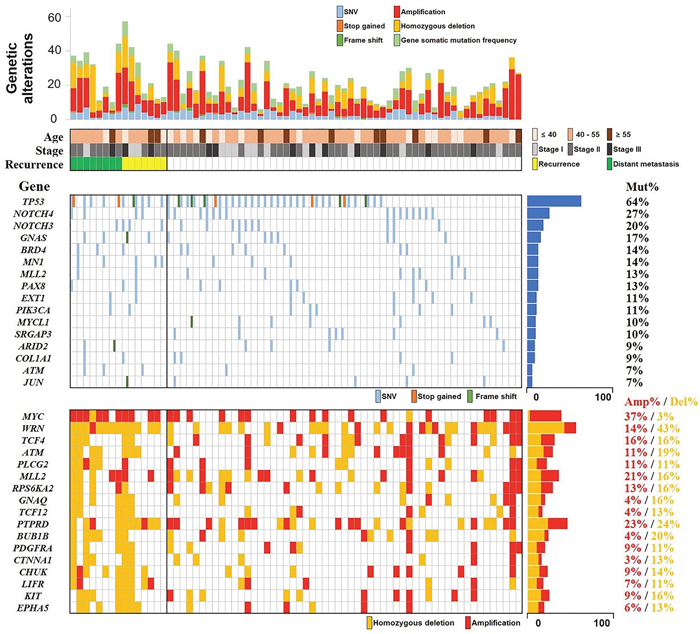 Copy number variation (CNV) analysis identified an average of 37.77 (range, 0–214) amplified genes and 26.86 (range, 1–170) homozygously deleted genes per patient (Figure 1B). Supplementary Table 6 lists all genes with CNV amplifications and homozygous deletions, whereas Table 2 lists the most frequently altered of these genes. Homozygous deletion of TP53, a tumor suppressor gene with the highest mutation frequency in this study, was observed in ten patients with TNBC, indicating that 55 (79%) of the 70 patients in our study cohort had either mutated or deleted TP53. Frequent amplification of NDRG1 and deletion of WRN and ATM were validated by qPCR (Supplementary Figure 2).

In addition to the deleterious germline mutations described previously, somatic homozygous deletions of BRCA1 and BRCA2 were observed in the genomes of 12 and 10 patients, respectively (Table 2, Supplementary Table 5). Some of these homozygous deletions were limited to a single exon, whereas other encompassed several exons (Supplementary Figure 3). 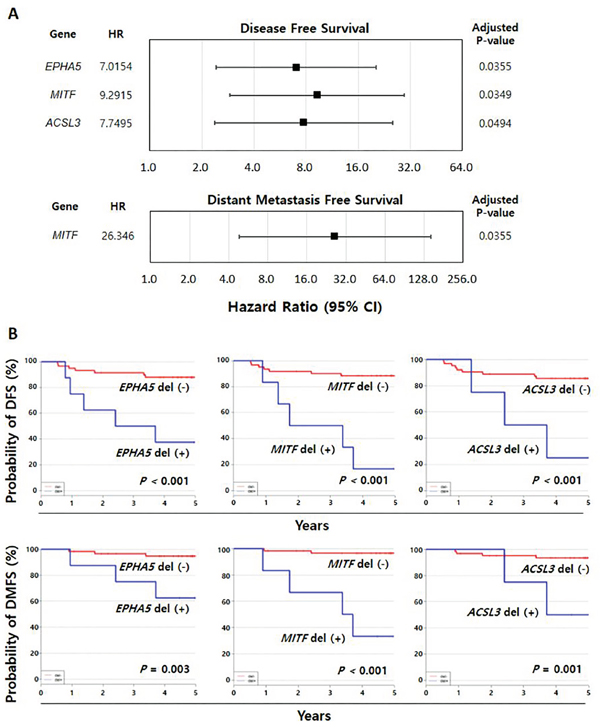 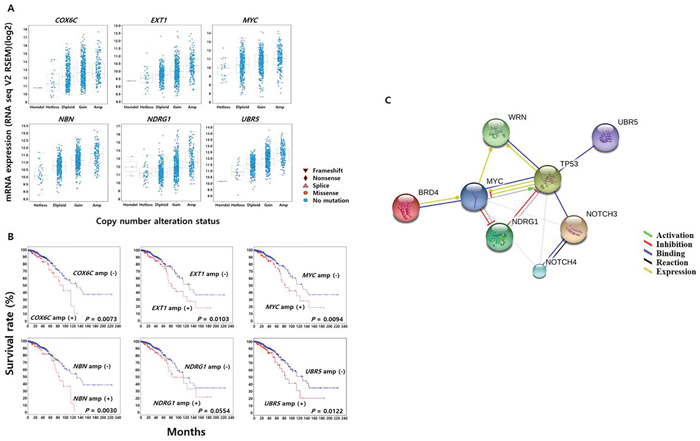 Next, we used STRING (Search Tool for the Retrieval of Interacting Genes/Proteins) v.10 [22] to perform a network interaction analysis of proteins encoded by these genes with the most frequent genetic alterations (i.e., somatic non-synonymous mutations and CNVs) in our cohort of 70 Korean patients with TNBC. We found that DNA damage response genes, such as TP53 and WRN, were frequently mutated in our TNBC cohort (Figure 4C). Notably, mutual exclusivity analysis using 500 clinical breast cancer samples from the TCGA database indicated a high likelihood of co-occurrence of alterations in the TP53, MYC, WRN, NDRG1, NOTCH3, UBR5, and BRD4 genes, all of which are involved in the above-mentioned interaction network. This finding supports the reliability and robustness of our analysis (Supplementary Figure 4).

Despite recent attempts to understand the clonal evolution of TNBC and to determine a detailed mutational spectrum in these tumors, little is known about the unique mutational profiles and therapeutic targets in TNBC patients from diverse ethnic populations [9]. This study revealed a comprehensive mutational spectrum specific to Korean patients with TNBC, as well as identifying novel, potentially prognostic genes. Compared with a cohort of Western European-North American patients with TNBC, our cohort of Korean patients possessed unique genetic features, which also included commonly mutated genes, such as TP53 and PIK3CA (Supplementary Table 8). Several recent studies have reported that mutations in NOTCH3 and NOTCH4 may cause breast cancer [23–25]. Similarly, we discovered novel recurrent SNVs in the N-terminal cytoplasmic domain of NOTCH3, including c.6841C>G (p.A2281P) in seven patients, and in the EGF-like domain of NOTCH4, including c.625T>G (p.T209P) in nine patients, c.118T>G (p.T40P) in five patients, and c.3064C>G (p.A1022P) in four patients. These mutations may have an important role in inducing oncogenic activity by inhibiting the binding of their ligands to NOTCH3 and NOTCH4. In addition, three patients in our cohort had the PIK3CA c.3140A>G (p.H1047R) mutation, which was recently reported as being crucial in inducing multipotency and heterogeneity of breast cancer [26, 27]. These findings reinforce the likelihood that the other novel recurrent mutations identified in our cohort warrant further investigation as molecular pathogenic biomarkers.

We also found that 26 (37%) of the 70 patients in our cohort had mutations in BRCA1 and BRCA2, including 12 and 10 patients with homozygous deletions of BRCA1 and BRCA2, respectively, two and four with deleterious somatic mutations, respectively, and three and one with deleterious germline mutations, respectively. In addition, homozygous deletions of DNA damage repair genes, such as ATM, WRN, and CHEK2, were present in more than half of our study cohort, suggesting that a large proportion of Korean patients with TNBC have an impaired DNA repair system, such as a homologous recombination deficiency. These findings suggest that a PARP inhibitor may have potential for treatment of TNBCs.

This study was approved by the Institutional Review Board of the Samsung Medical Center, Seoul (South Korea), and performed in accordance with the principles of the Declaration of Helsinki. Because the study was retrospective in nature, the requirement for informed consent was waived. Patient information was anonymized and de-identified prior to analysis.

Seventy TNBC and matched normal tissues were collected from the pathology department at Samsung Medical Center, Seoul, South Korea. Immediately upon removal, the specimens had been frozen immediately in liquid nitrogen or fixed in formalin, with the latter used to produce formalin-fixed and paraffin-embedded (FFPE) blocks. Sections of each FFPE sample were stained with hematoxylin and eosin for sample validation by a pathologist (YLC). The expression of ER, PR, and HER2 was assessed by the same pathologist (YLC), as previously described [28].

Of the 368 selected target genes, 234 had previously been reported to be cancer-associated genes frequently mutated in solid tumors and sarcomas, but not in hematological cancers, and listed in the Cancer Gene Census of the Wellcome Trust Sanger Institute (http://cancer.sanger.ac.uk/census/), and 134 were genes encoding cell growth- and kinase-related factors and transcription factors. These 368 genes included 5,700 regions encoding exons. The total size of the target region was 961,497 bp (Supplementary Table 9).

Bioinformatic analysis of SNVs and INDELs

Paired-end sequence raw reads were trimmed and filtered to produce clean reads with good base quality (Phred Q score > 20). Burrows-Wheeler Alignment (BWA 0.5.9), the Genome Analysis Toolkit (GATK), and SAMtools were used to align these paired-end sequencing reads with the human reference genome hg19. Identified SNVs and small INDELs were analyzed using the variant databases dbSNP135, dbNSFP COSMIC, and the 1000 Genomes, and several software programs, such as SNPEff, SIFT, PolyPhen2, LRT, PhyloP, Mutation_Taster, Mutation_Assessor, FATHMM, and GERP_NR. Somatic non-synonymous SNVs and INDELs were selected using the following criteria: a >20% read-allele frequency at the position; ≥15 mapped reads at the position; and zero SNV or INDEL allele reads in the targeted sequence of corresponding normal tissue. Variants were confirmed by visualization in the Interactive Genomic Viewer and NextGENe software v2.3.1 (SoftGenetics, State College, PA, USA), as well as by quantitative PCR (qPCR).

Survival was analyzed by the Cox proportional-hazards regression method [29] using clinical information and somatic mutation data of patients who had been treated with adjuvant chemotherapy. After determining the HR and p-value of each mutation, Benjamini-Hochberg multiple testing correction was applied to address the risk of false positives because of multiple analysis (false discovery rate = 0.05) [30].

STRING, KEGG (Kyoto Encyclopedia of Genes and Genomes), and DAVID (Database for Annotation, Visualization, and Integrated Discovery) were used to analyze oncogenic and tumor-suppression pathways in TNBC samples. In addition, CNV information, RNA expression, and mutation data of our TNBC samples were compared with those of TNBC samples from the TCGA database.

We would like to thank the patients who consented to participate in this study.