Syndecan family proteins are heparan sulfate proteoglycans, which involved in various cellular activities and associating with metastatic potential and chemosensitivity of tumor cells. Melanoma is one of malignant tumors with poor prognosis upon metastasis. Previously, we had shown that melanoma cells remained survived under cell detachment, which was similar to the initial steps of tumor metastasis. Downregulation of syndecan-1 and upregulation of syndecan-2 in melanoma A375 cells were observed by different suspension conditions. Specific gene alterations also increased melanoma malignancy under anchorage independency. Thus, we would like to investigate in further the role of specific gene alteration, so that it could be used to develop novel strategy to treat melanoma.

In conclusion, we showed upregulation of syndecan-2 in anoikis-resistant melanoma cells enhanced chemosensitivity through PI3K and ERK activation. This observation would support and refine the strategy of adjuvant chemotherapy to overcome metastatic melanoma.

Melanoma is aggressive skin cancer with high morbidity, high mortality, and poor prognosis for its highly invasive characteristics. Surgical removal of melanoma in situ is the major management [1], while it is difficult to remove completely for its re-occurrence with distant metastasis [2]. Detection and removal of micrometastases in sentinel lymph node and the following adjuvant therapy might prevent relapse of metastatic melanoma but some debates remained [3, 4]. Metastasis of tumor cells could be divided into several stages and characteristics distinct from their original tissue sources, including transformation to escape from primary tumors, intravasation into circulation system, dissemination in anchorage-independent/prolonged survival, and lodging at the secondary site for successive angiogenesis process [5–7].

Detachment of tumor cells from extracellular matrix and survival under anchorage-independency was recognized as initial step of tumor metastasis [8]. Detachment of normal cells causes cell apoptosis through anoikis signaling [9, 10], while the anoikis resistance of tumor cells ensured their survival and metastasis [11]. It was suggested that anchorage-independent growth promoted oncogenic transformation through hyperactive signaling pathways associated with epithelial-mesenchymal transition [8, 12–14]. Many studies had focused on the change of protein expression for malignant melanoma cells under anchorage-independency [2, 15]. However, the understanding how these changes were contributive to alternative phenotypes of tumor cells was limited.

Proteoglycans are major components of extracellular matrix s in different species, tissues, and cells. Of all the proteoglycans, heparan sulfate proteoglycans are exclusively important due to their involvement in several physiological processes or human diseases, including cell proliferation, differentiation, adhesion, migration, and tumor metastasis [16–18]. Syndecan superfamily contains four members of transmembrane-type proteoglycans with homologous cytoplasmic domains but distinct extracellular domains. Their protein domains contact with extracellular components and function as acceptors for various growth factors, chemokines, and adhesion molecules. Syndecan-2 (SDC2) had been shown to be associated with increased migration and invasion of melanoma cells [19] and melanin synthesis [20]. SDC2 was known to induce cell apoptosis in osteosarcoma through JNK signaling [21]. Overexpression of SDC2 sensitized human osteosarcoma cells to apoptosis induced by chemoagents [22], as well the fibroblast cells to apoptosis induced by serum-withdrawal [23].

In this paper, we characterized the upregulation of SDC2 in melanoma cells and investigated their functional role in cell migration, signaling, and chemosensitivity. That would be beneficial to develop one novel strategy to eradicate melanoma dissemination.

Previously, we had shown the decreased expression of syndecan-1 (SDC1) was mediated by PKCδ that promoted loss of cell invasiveness for melanoma A375 cells under anchorage-independency [24]. The expression of SDC1 and SDC2 in different melanoma cells were examined (Figure 1A). The increase of SDC2 expression was more significant in melanoma A375 cells. We further examined the overall SDC2 protein expression and cell surface content by western blot and flow cytometry, respectively (Figure 1B). Under cell suspension, SDC2 protein level increased as well the level at cell surface. This suggested possible function of glycosaminoglycan-modified proteoglycan exhibited at plasma membrane. It had shown that differential EGFR-signaling promoted anchorage-independent growth of squamous carcinoma cells [25]. We examined the activation of signaling pathways under anchorage-independency by western blot. As seen in Figure 1C, phosphorylations of PI3K, Akt, JNK, MEK, and ERK1/2 increased upon cell suspension. This was consistent with other observation that several signaling pathways were activated upon anoikis resistance [26, 27]. 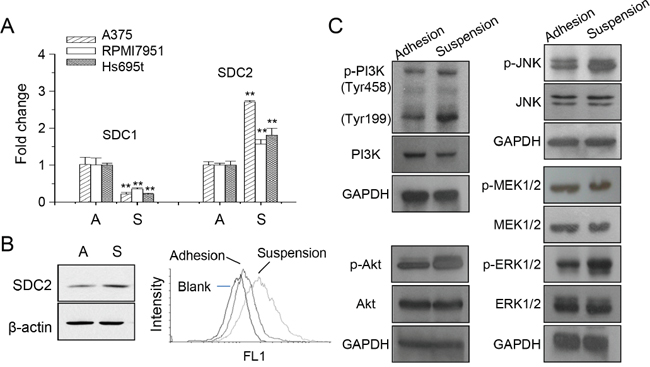 Figure 1: Increased SDC2 expression and kinase phosphorylation in melanoma cells under anchorage-independency. (A) Expression of syndecan protein SDC1 and SDC2 under adhesion culture, A, or suspension culture, S, in different melanoma cells as analyzed by qPCR. Data were mean ±S.E. (n=3) **, p < 0.01. (B) SDC2 protein expression in A375 cells increased upon suspension as analyzed by western blot and flow cytometry. (C) Increased phosphorylation of PI3K, Akt, JNK, ERK, but not MEK, in suspended melanoma cells as examined by western blot. 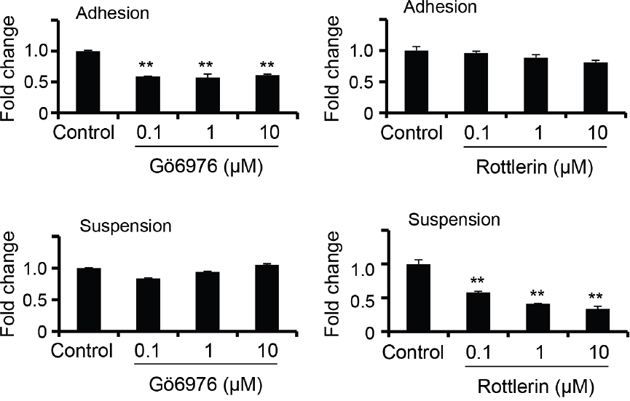 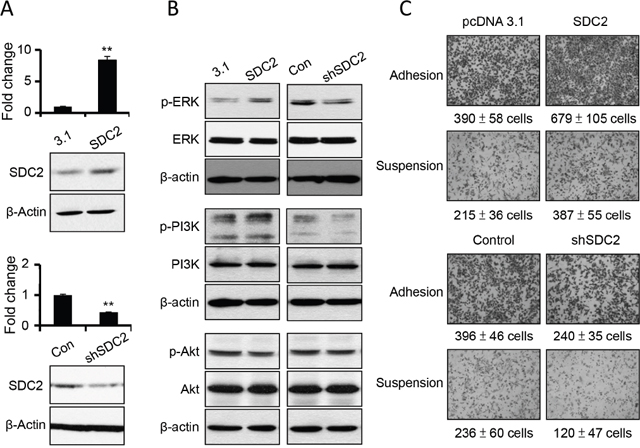 The change in SDC2 level affected cell invasiveness. As seen in Figure 3C, overexpression of SDC2 protein increased cell mobility while suppression of SDC2 expression decreased cell mobility at either adherent melanoma or suspended melanoma cells as investigated by transwell cell migration assay. This results were consistent with previous literature that SDC2 increased migratory potential of melanoma cells [19]. Previously, we demonstrated that downregulation of SDC1 inhibited cell adhesion and invasiveness [24]. In this study, we suggested SDC2 overexpression would enhance cell migration, however, suspended melanoma cells with higher SDC2 expression showed characteristics of invasiveness loss [24]. It was explained that SDC1 downregulation overwhelm the effect of SDC2 upregulation by suppression of laminin-binding and matrix metalloproteinase-2 secretion that led to loss of cell invasiveness [24].

As seen in Figure 4A, treatment of camptothecin (CPT) in adherent cells exhibited cell apoptosis in the concentration ranging from 0.1 to 0.5 μM as revealed by the presence of cleaved poly ADP ribose polymerase (PARP), a typical hallmark of caspase activation and cell apoptosis. However, cleaved PARP was seen by treating as low at 0.01 μM CPT for suspended melanoma cells (Figure 4A). Higher amount of cleaved PARP was seen in suspended melanoma cells by treatments at the same CPT concentrations (0.1 to 0.5 μM) than those in adherent cells. We did test other chemoagents (sorafenib and carmustine) and other melanoma cells, that enhanced chemosensitivity was also seen for melanoma cells under suspension (data not shown). This indicated the chemosensitivity of melanoma cells increased under cell suspension. 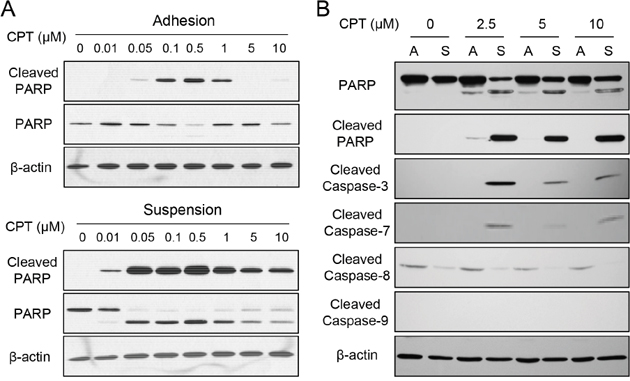 After increasing the SDC2 expression level, we examined its effect on chemosensitization upon cell suspension. For suspended melanoma cells, SDC2 overexpression increased the amount of cleaved PARP, while suppression of SDC2 expression decreased the amount of cleaved PARP (Figure 5A). We also overexpressed the SDC1 protein, which belonged to SDC superfamily and was downregulated in melanoma A375 cells under anchorage-independency [24]. However, no difference in cleaved PARP level by SDC1 overexpression or suppression (Figure 5B). This suggested that SDC2 protein specifically enhanced chemosensitization in suspended melanoma cells. 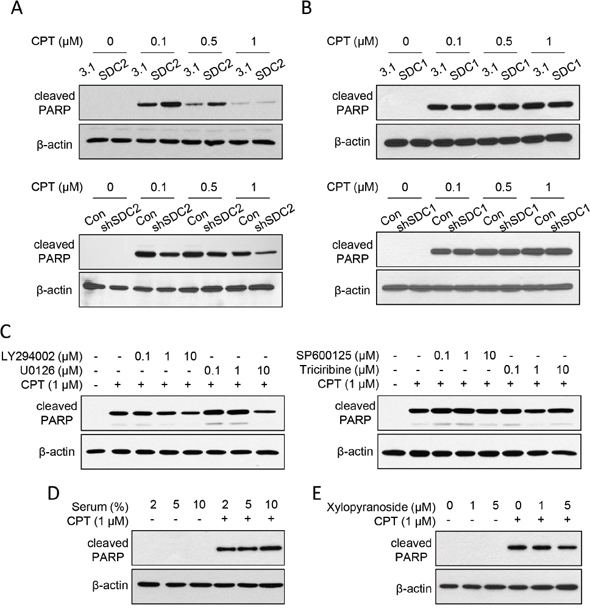 PI3K activation was associated with SDC2-mediated increase of chemosensitivity

In further, we investigated whether SDC2-mediated chemosensitization was associated with signaling pathway activation. As shown in Figure 5C, the PI3K inhibitor (LY294002) reduced PARP cleavage, which indicated PI3K activation might promote chemosensitization. MEK/ERK inhibitor (U0126) was effective to reduce only at higher concentration (10 μM). The effect of JNK inhibitor (SP600125) and Akt inhibitor (triciribine) were marginally effective that no significant change was observed (Figure 5C). This suggested that activation of PI3K and ERK pathways under cell suspension enhanced chemosensitivity (Figure 1C), which were mediated by SDC2 upregulation (Figure 1A, 1B, and 3B).

SDC2 is the heparan-sulfate proteoglycan that mediates cell activity through its glycosaminoglycan binding with many cytokines or growth factors. We investigated whether increased chemosensitivity was associated with serum concentration and the presence of glycosaminoglycan chain. As seen in Figure 5D, decrease in serum concentration suppressed CPT-induced apoptosis as determined by less cleaved PARP. Solely reducing the serum concentrations did not affect cell apoptosis. These results implied the growth factors in the serum promoted CPT-induced apoptosis in suspended melanoma cells.

Anchorage-independent survival was one of key features in malignant tumor cells [27]. Activation of specific signaling pathways, such as PI3K pathway, were associated with their survival under suspension [31–33] or resistance to apoptosis [27, 34]. In this paper, we showed the activation of PI3K, Akt, ERK, and JNK upon anchorage-independency, which were associated with enhanced sensitivity of suspended melanoma cells toward chemoagents. It had been shown that suppression of NF-kB activation to enhance chemosensitivity by imidazoline in leukemia T cells responsive to camptothecin [35] or by curcumin in esophageal adenocarcinoma responsive to 5-fluorouracil or cisplatin [36]. Inhibition of the PI3K/Akt pathway by LY294002 increases the chemosensitivity of gastric cancer cell toward vincristine [37]. Our results demonstrated the activation of PI3K pathway promoted chemosensitivity of suspended melanoma cells. We suggested the PI3K pathway might act as double-edged sword that promote cell survival and enhanced damage by chemoagents under anchorage-independency.

Heparan sulfate chains in SDC2 proteoglycans act as binding acceptors for several growth factors or chemokines. We demonstrated the elevated serum concentration promoted CPT-induced apoptosis through the glycosaminoglycan chains, that would activate PI3K or ERK pathways that enhanced chemosensitivity of melanoma cells under suspension. This is an interesting phenomenon but was in contrast with other observations, at which serum-depletion might induce cell apoptosis or enhance chemosensitivity [38–40]. However, several literatures implied the growth factors or receptors promoted or involved in cell apoptosis [41–45].

Our observation could explain and support the current strategy of adjuvant chemotherapy to block the survival or to eliminate disseminated melanoma cells through low-dose administration of chemoagents after surgical removal and pre-metastatic stages in melanoma patients. Since enhanced chemosensitivity in the presence of serum was achieved by elevated SDC2 expression and pathway activation upon cell detachment, applications of specific chemoagents against melanoma in lower dosage would be effective to kill suspended melanoma cells. However, the clinical usage and proper doses need to be evaluated in advance.

We thanked ChiaoHui Hsieh for the assistance of PCR experiments.

The authors state no conflicts of interests.