The elevated NLR, PLR and PLT may predict the prognosis of patients with colorectal cancer: a systematic review and meta-analysis

The colorectal cancer (CRC) is one of the increasingly common malignancies worldwide. According to the report from GLOBOCAN 2012, the incidence rate of CRC is at the third place becoming one of the most common cancers [1]. The incidence of the disease is 12.3% in men and 13.1% in women in Europe [2]. What is more, in North America, CRC is the third most common cause of cancer-related deaths [3]. At present, despite advanced instruments for screening and early detection of CRC, and surgical resection being the optimal option for the patients with colorectal cancer, about twenty percent of cases are found to be metastatic at the time of diagnosis and at least about half of patients die within 5 years after their diagnosis [4, 5]. Thus, appropriate prognostic markers were needed to predict patients’ postoperative prognosis and the survival of patients at high risk of recurrence, and to guide patients to choose additional treatment.

Hopefully, in recent years, several reviews have reported that elevated platelet counts and NLR may be associated with the poor prognosis of gastric cancer, lung cancer, renal cancer and gynecologic malignancies [6–9]. Besides, previous studies have showed that elevated NLR, PLR or PLT) also associated with poor prognosis for esophageal, renal and hepatocellular malignancies [10–14]. Likewise, the association between elevated NLR, PLR or PLT and the survival of colorectal cancer had also been published in some studies [15–48]. However, fallaciously, their results still remained inconsistent, with several studies drawing inverse conclusions [19, 22, 30, 49]. Therefore, we designed a meta-analysis based on relevant studies to analyze and evaluate the prognostic role of elevated preoperative or pretreatment NLR, PLR or PLT in patients with colorectal cancer. 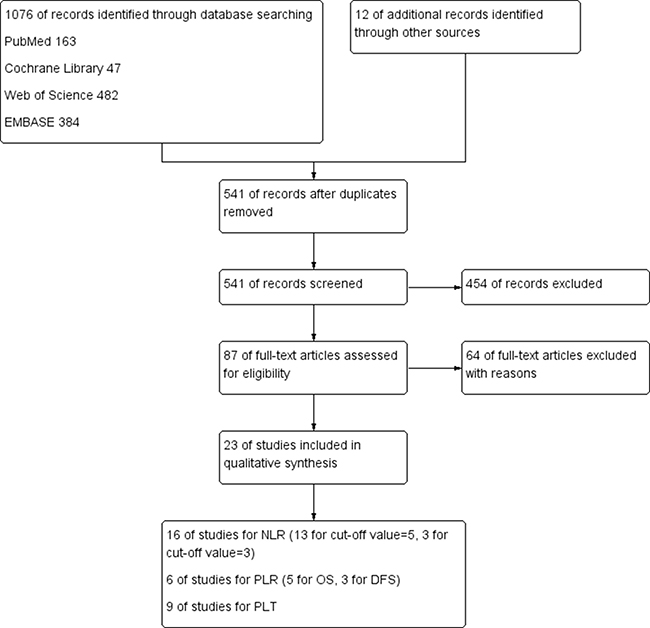 Figure 1: Flow diagram of the search strategy for pretreatment NLR, PLR and PLT as prognostic roles in patients with colorectal cancer.

Table 1: The characteristics of included studies for NLR, PLR and PLT

The prognostic value of elevated NLR

The prognostic value of elevated PLR

The prognostic value of elevated PLT

Nine studies including 3685 participants reported the association between elevated PLT and overall survival in patients with colorectal, with the cut-off value of platelet counts equal to 400 × 109/L. As no significant heterogeneity between studies (I2 ≤ 50% and P ≥ 0.05), a fixed effect model was used to estimate the association between elevated PLT and OS. The pooled HR with no significant heterogeneity indicated that elevated PLT had an obvious association with overall survival [HR = 1.89, 95% CI 1.58–2.25; P < 0.00001] (Figure 7). 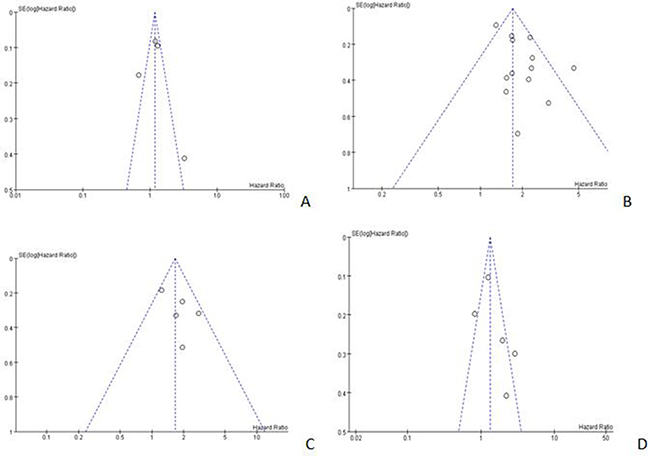 The relation between inflammation and malignancies was identified in the 19th century by Rudolf Virchow [63]. Growing evidences have support inflammation may play important roles in the development and progress of many inflammation, including CRC [14, 64, 65]. Many inflammatory cells and growth factors they produced could activate stroma and DNA-damage-promoting agents [66]. Meanwhile, tumors can increase inflammatory process and promote proliferation and metastases development of tumor cells by decreasing apoptosis and increasing angiogenesis and DNA damage in return [67].

Platelet plays an important role in the development and progression of malignancies as well. Great interest has been given in the prognostic role of thrombocytosis for patients with malignancies recently, as previously mentioned. However, the true mechanism or association between thrombocytosis and malignancies had not been clarified. There were several possible explanations for the association between elevated platelet counts and poor prognosis of malignancies. First, platelet might protect tumor cells from cytolysis, thereby promoting metastasis, by surface shielding them from immune system detection, and this seems to be the main mechanism of platelet protection [68]. Secondly, angiogenesis regulatory proteins are implicated in tumor growth and invasion. In colorectal cancer patients, the levels of PDGF, PF4 and VEGF are elevated in platelets, and the elevated levels of all three proteins correlated with the cancer state [69]. Platelets could stimulate angiogenic vessel growth and prevent hemorrhage from the angiogenic vessels, which was promoted by the adhesion function of platelet, as mediated by glycoprotein (GP) Ibα, and these processes could stimulate and potentiate tumor cells to form distant metastases [70]. Additionally, T-factor could reveal that platelets may assist tumor cells in invading to adjacent tissues, and thrombocytosis is just right strongly correlated with the progression of T-factor.

Nevertheless, there were several limitations for this meta-analysis. The main limitation is the inconsistency of the cut-off values of NLR, PLR and platelet counts. For NLR, some studies used the cut-off values with 4, 2.9, 2.8, and 2.6 and so on. For example, Shen, L.J [39] suggested that 2.8 was the best cut-off value of NLR for distinguishing the prognosis of patients with CRC, differently from 4.0 in the study of Kaneko, M [42]. The cut-off values of PLR ranged from 150 to 300. But many studies used 150 as the best cut-off value. The definition of thrombocytosis or elevated platelet counts ranged from 260 × 109/L to 400 × 109/L. Based on the various discordance, we chose 5, 150 and 400 × 109/L as the cut-off value of NLR, PLR and PLT respectively with decreasing the number of studies included. The second limitation is the variation of the clinical stages, for that the prognosis of patients with cancer is associated with clinical stages. The majority of studies included showed no significant difference in clinical stages with the P value of Chi-squared test more than 0.05. But there were many studies had significant differences in clinical stages for NLR [50, 52, 59], PLR [50] and platelet count [21, 29, 59] with the P value less than 0.05. Besides, the incidence or significance of the association between different clinical stages and prognosis for PLT was also different. The incidence of thrombocytosis was associated with clinical stages and increased to 12.2% and 20.6% in patients with stage III and IV disease respectively [19]. As 2014 Guo, Tian-hua reported, thrombocytosis has association with poor prognostic significance in patients with stage I to stage III colorectal cancer, but not in patients with stage IV disease. In addition, Sasaki K suggested that preoperative thrombocytosis was an independent indicator only in patients at stage II for cancer-specific survival [25]. Moreover, the time of measuring neutrophils, lymphocytes and platelet count before treatment or surgery might be an important limiting factor. Blood samples of patients were obtained within 5–7 days before surgery in the study of Sun, Z.Q. [50], but 2 weeks prior to operation in Kazuhito Sasaki [25]. Finally, the prognosis or the value of neutrophils, lymphocytes and platelet count were also influenced by other multiple factors, such as age, adjuvant therapy, and tumor size, histological type, venous involvement, which should also be taken into consideration. The last important limitation was the publication bias. As mentioned before, there were obvious bias in both NLR (cut-off value = 5) and PLT for OS and the analysis of causes were offered in discussion. The factors impacting publication bias may be various. In my opinion, apart from the factors like no publication of negative results, termination of publication, the language limitation may be the main influence, for that our searching language was only English.

Taking the limitations above into account, further researches need to clear the association between elevated NLR, PLR and platelet counts and prognosis in patients with different clinical stages.

Despite many difference and influencing factors, we could cautiously draw a conclusion that elevated NLR, PLR and platelet counts may have a close association with worse survival in colorectal cancer patients, with consideration of the evident statistical significance. Elevated NLR, PLR and platelet counts may be used as three prognostic indicators for early identification of CRC patients with worse prognosis, and then more attention and adjuvant therapy could be given to these patients.

Including and excluding criteria

The including criteria of this meta-analysis were as follows: (1) All of randomized, controlled trials (RCTs), observational prospective or retrospective studies were included; (2) Included people with a diagnosis of colorectal cancer; (3) Included patients received operation or other adjuvant therapy; (4) Pretreatment platelet counts (cut-off value = 400 × 109/L), NLR (cut-off value = 5) or PLR (cut-off value = 150) were reported or can be obtained; (5) The outcomes including OS or DFS were reported; (6) Sufficient data (HR and 95%CI on OS or DFS) were provided.

Excluding criteria were as follows: (1) Trials on animals; (2) Abstracts, letters, editorials, expert opinions, reviews, case reports; (3) Patients having other primary tumors; (4) Studies without sufficient data; (5) The cut-off value did not meet our including criteria.

We searched PubMed, EMBASE, Cochrane Library and Web of Science to April, 2015. We also hand searched the citation lists of included studies and previously identified systematic reviews to identify further relevant trials. our searching terms and procedures were as follows: (1)“thrombocytosis”, “platelet count*”; (2) “neutrophil lymphocyte ratio”; “neutrophil to lymphocyte ratio”, NLR; (3) “platelet lymphocyte ratio”, “platelet to lymphocyte ratio”, PLR; (4) “colorectal cancer”, “rectal cancer”, “colonic cancer”; (5) “prognosis”, “survival”, “outcome”; (1 OR 2 OR 3) AND 4 AND 5. Other related terms, including references of some literatures we read, were also searched in English. Two assessors independently screened the titles and abstracts of each study. Once relevant studies became certain, the full texts were obtained for further evaluation.

Two reviewers assessed the quality of all the included studies using the 9-star Newcastle-Ottawa Scale (NOS) [71] independently, and the total scores of each study were displayed in the characteristics table. The scores were judged according to the three aspects of NOS of evaluation: selection, comparability, and outcome between the case group and control group. Studies with the scores ≥ 6 were assigned as high-quality studies.

Data for the analysis were extracted independently by two reviewers, and disagreement was resolved by their discussion. In addition, the extracted contents including study demographics, published years, country, trial design, outcome and clinical stage were extracted using a standardized form.

Data collected were input into RevMan 5.2 software for analysis [72].

In this meta-analysis, the impact of NLR, PLR or PLT on patients’ prognosis was measured by estimating the Hazard Ratio (HR) between elevated NLR, PLR or PLT groups and normal NLR, PLR or PLT groups. The associated 95% confidence intervals (CI) were also measured. The heterogeneity between studies was evaluated with P value and I2. I2 ≥ 50% or P ≤ 0.05 was deemed to represent significant heterogeneity [73, 74], and pooled HR was estimated using a Random-effect model. On the contrary, if statistical study heterogeneity was not observed (I2 ≤ 50% and P ≥ 0.05), a fixed effects model was used. Finally, publication bias was assessed by Begg’s and Egger’s test. If the shape of funnel plots revealed no obvious evidence of asymmetry, we considered that there was no obvious publication bias. All statistical analyses were performed using standard statistical procedures provided in RevMan 5.2 [73].

We are grateful for contributions from all the group members including the following individuals: Jie Zhang, Hong-Ying Zhang and Jia Li contributed to the study design, data analysis and quality assessment. Xin-Yu Shao, Jie Zhang and Chun-Xia Zhang contributed to the literature search. There is no funding for this work.

The authors declare no interest.

23. Juan Castillo-Perez J. Regarding the Article "Thrombocytosis As a Predictor of Distant Recurrence in Patients with Rectal Cancer". Archives of Medical Research. 2013; 44:77–78.