Esophageal cancer is the sixth leading cause of cancer-related mortality in both developing and developed countries [1]. Esophageal squamous cell carcinoma (ESCC) is the most prevalent type of esophageal cancer, particularly in East Asia and some parts of Europe [2]. Despite recently much more effort has been dedicated to improving treatment of patients suffering from ESCC, the prognosis remains quite poor, with a great number of patients experiencing disease progression in a short time [3]. Radical surgery is standard treatment that can provide opportunity for cure. However, the 5-year survival rates for surgically resectable ESCC are still unsatisfactory and range from 15% to 30% [4–6]. Adjuvant chemotherapy or radiotherapy could improve disease-free survival [7]. Furthermore, the benefit of platinum-based adjuvant chemotherapy for ESCC patients has not been established. Several studies have attempted to discover molecular biomarkers to predict the prognosis of ESCC [8–10]. However, to date, most of these markers had not been proven to be sufficiently effective [11].

D-dimer is a degradation product of fibrin in the blood during fibrinolysis, which could be used for diagnosis of thrombosis. Elevated plasma D-dimer levels were observed in acute venous thromboembolism, pregnancy, infectious diseases, as well as cancers [12, 13]. Furthermore, D-dimer has been implicated in tumor invasion, metastasis, and eventual worse outcome in various types of cancer [14, 15]. In ESCC, plasma D-dimer levels are useful for predicting lymph node metastasis [16]. In Tomimaru Y et al.’ report, plasma D-dimer levels correlated significantly with clinical and pathological responses to neoadjuvant chemotherapy [17]. However, the sample of these studies was relatively small. Furthermore, less studies have been performed to access the prognostic significance of postoperative plasma D-dimer levels after curative resection, which could reflect the patients’ status after tumor removal. Therefore, the aim of this study was to determine whether the plasma D-dimer levels before treatment and its perioperative change are predictors of mortality in patients with ESCC.

The baseline characteristics of 294 patients are presented in Table 1. 268 patients were male and 26 patients were female. The median age was 58 years (range: 38–70 years). 245 patients were former smoker. After surgery, 195 patients were detected to have T3–4 disease while 99 patients had T1–2 disease. There were 96 patients with N0 and 198 patients with mediastinum lymph node metastasis. The median tumor length was 4 cm (range: 0.5 cm–11.0 cm). Sixty patients (20.4%) received four to six cycles of cisplatin-based chemotherapy while sixty-two (21.1%) patients received adjuvant radiotherapy.

Relationship between D-dimer and clinicopathological characteristics

The clinicopathological features of two groups categorized by perioperative change of plasma D-dimer levels are summarized in Table 1. The patients’ distribution was 254 patients in D-dimer decreased group and 40 patients in D-dimer increased group. There were no significant differences among the perioperative change of plasma D-dimer levels with regard to sex, age, smoking status, tumor location, tumor length or T stage, whereas N stage showed significant difference (P < 0.001). 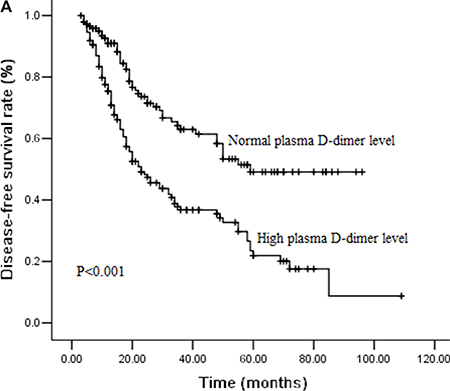 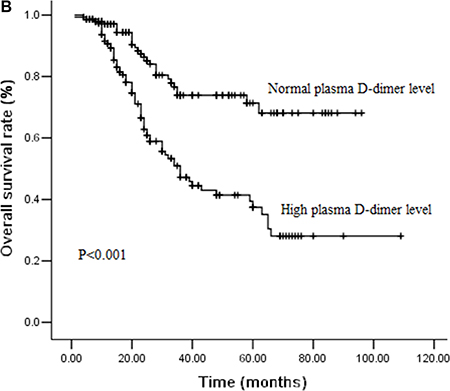 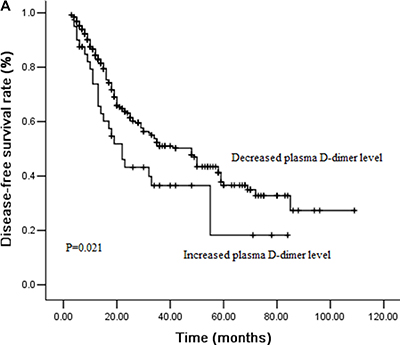 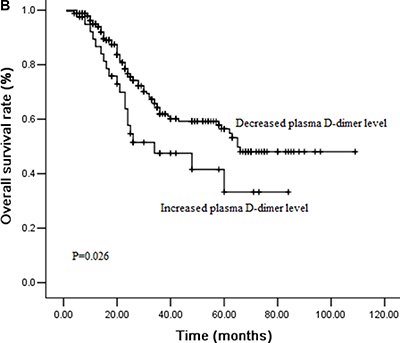 Table 3: Results of multivariate analyses of clinicopathological factors affecting DFS and OS in patients with ESCC

Our study also had several limitations. First, plasma D-dimer levels and platelet counts were checked only once in each patient and were not examined during the treatment and the follow-up. The relationship between changes in plasma D-dimer levels and tumor progression need to be investigated. Second, our study included a comparative homogeneous population with the majority of male and smoker patients, which might cause a bias. Also, this is a retrospective study based on patients of one institution and could not completely avoid selection bias. Furthermore, distant organ metastasis rate during follow-up was not the focus in this study, they should be reported. But unfortunately, we do not have detailed information of metastasis due to the retrospective nature of this study.

In this study, the data of 294 ESCC patients between December 2007 and December 2012 in Mingzhou hospital, Ningbo, China were analyzed retrospectively. All patients were newly confirmed to have ESCC and had not received treatment previously. Patients with other malignancies were excluded from this study. Pretreatment plasma D-dimer levels and serum CRP levels obtained within 1 week before surgery. Patients with a history of venous thrombosis or anticoagulation therapy, hypertension, cardiovascular and cerebrovascular disease and diabetes were excluded from the current study. The following detail clinical information was retrospectively collected and analyzed for each case: sex, age at treatment, smoking status, tumor location, clinical TNM stage, treatment response, disease-free survival (DFS) and overall survival (OS) after treatment. TNM classification was evaluated according to the 7th edition of the Union for International Cancer Control staging. All procedures performed in studies involving human participants were in accordance with the ethical standards of the institutional and/or national research committee. Informed consent was obtained from all individual participants included in the study.

All patients underwent total or subtotal transthoracic esophagectomy and regional lymphadenectomy with curative intent. Sixty (20.4%) were treated with adjuvant platinum-based chemotherapy and sixty-two (21.1%) patients received post-operative radiotherapy. All patients received standardized follow-up at a 3-month interval for the first 2 years after operation, a 6-month interval in the third year and yearly thereafter. The median follow-up time was 26 months.

Disease-free survival (DFS) was defined as the time from surgery to any recurrence, including locoregional recurrence and distant organ metastasis. Overall survival (OS) was calculated as the time from the date of surgery to death or censoring. The chi-square test was performed to evaluate the association between the clinicopathological variables and plasma D-dimer levels and INR. Survival curves were estimated by the univariate Kaplan-Meier method. The log-rank test was applied to check the significant difference in the curves among groups. Furthermore, we used the Cox proportional hazards model for multivariate analysis. All statistical calculations were performed with SPSS 23.0 software for Windows (Chicago, IL, USA). Two-sided P-values of < 0.05 were considered to be statistically significant.

In conclusion, we have provided the clinical evidence that plasma D-dimer levels were related with clinicopathological factors in ESCC. We demonstrated that pretreatment plasma D-dimer levels could be served as new independent prognostic biomarkers for DFS and OS in operable ESCC, although its prognostic significance still requires confirmation with larger patient populations.

All authors contributed toward data analysis, drafting and critically revising the paper and agree to be accountable for all aspects of the work.