Plasma cell leukemia (PCL) is a rare and highly aggressive plasma cell dyscrasia that occurs in 1–4% of patients with multiple myeloma (MM) [1, 2]. It is defined by the presence of more than 20% plasma cells in peripheral blood and an absolute plasma cell count ≥ 2 × 109/L [3, 4]. PCL is classified as primary and secondary; ‘primary’ is used when PCL presents in patients without previous evidence of MM. Primary PCL (pPCL) represents ~ 60% of PCL, and has distinct clinical and laboratory features at presentation compared with those of MM. pPCL is generally diagnosed at a younger age than MM or secondary PCL. Patients with pPCL have more advanced International Staging System (ISS) stage of disease at presentation, frequently accompanied by hepatomegaly, splenomegaly, extramedullary disease, and extensive bone disease. Additionally, renal failure, hypercalcemia, thrombocytopenia, increased lactate dehydrogenase (LDH), and elevated plasma cell labeling index are more frequent in pPCL than MM [4, 5]. In studies investigating pPCL, it has been shown that pPCL has a different biological feature than MM in terms of immunophenotype expression, cytogenetics, gene-expression profiles, and microRNA signatures. Multiparametric flow cytometry revealed that PCL shows higher expression of CD20 antigens and lower CD9, CD56, CD117, and HLA-DR than MM [6, 7]. The frequencies of t(4;14), t(11;14), and t(14;16) were higher in pPCL, and del(17p13.1) was detected in about 13–50% of pPCL cases [8–11]. In a study investigating gene expression profiles in 21 patients with pPCL, a 503-gene signature, especially related to the NFκB pathway, structural organization of the cell, and cell adhesion/migration differed from that in MM [12].

With these unfavorable clinical and biological characteristics at presentation, patients with pPCL have a dismal prognosis, with a median overall survival (OS) of only 7–12 months with conventional chemotherapy alone [1, 6, 13]. Although a few recent studies have suggested that the use of novel agents and performing autologous stem cell transplantation (ASCT) increased the survival outcomes in pPCL [14–16], the prognosis is still poor compared with MM, and the optimal therapy remains undefined.

In this study, we collected data on Korean patients with pPCL. We then analyzed the clinical and cytogenetic characteristics, survival outcomes, and prognostic factors associated with OS.

Table 3: Summary of response according to front-line treatments (n = 59)

Overall response rates (ORR) after initial therapy were significantly higher in patients treated with novel agent-based regimens compared with those treated with conventional chemotherapies (75% vs. 43.4%, P = 0.026). In patients who were treated with novel agent-based regimens, there was no difference of ORR between bortezomib- and thalidomide-based regimens. Upfront ASCT was performed in 22 (37.3%) patients. Twenty-one patients maintained the best response at ASCT and one patient who had achieved VGPR after conventional chemotherapy eventually lost the response and progressed before ASCT. Twelve (54.5%) patients achieved complete remission (CR) after ASCT. One patient received consolidation therapy with bortezomib and dexamethasone after ASCT and 10 received maintenance therapy with thalidomide after ASCT. One (1.7%) patient received the allogeneic stem cell transplantation (SCT) after initial VMP induction chemotherapy, and progressed at 9.3 months after allogeneic SCT. 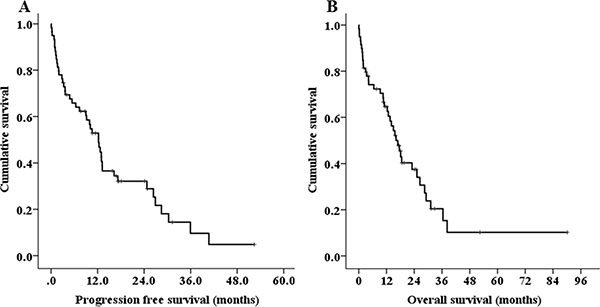 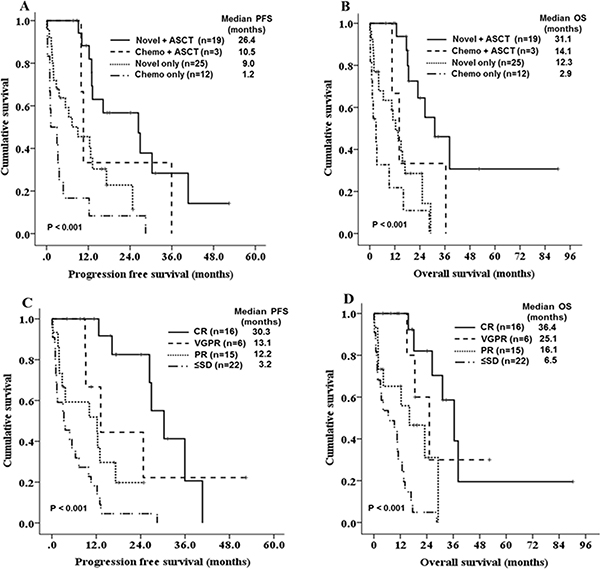 Figure 2: Kaplan-Meier survival curves for PFS and OS according to treatment groups (A, B) and best response to front-line treatment (C, D).

We evaluated the factors associated with PFS and OS in the 59 patients who were treated. The univariate analysis demonstrated that five clinical factors were associated with PFS and OS (P < 0.1); these factors were increased LDH level, thrombocytopenia, low serum albumin level, high serum β2-microglobulin and non-CR after front-line treatment. Additionally, del17p was associated with OS in univariate analysis (Table 4). Cox multivariate analysis for PFS and OS was performed. Increased LDH level, low serum albumin, and non-CR after front-line treatment were associated significantly with PFS and OS (Table 5). The prognostic impact of each cytogenetic abnormality was evaluated in univariate analyses. Although patients with del17p showed a trend towards shorter OS compared to those without del17p (15.6 vs. 18.1 months, respectively, P = 0.086), none showed significant prognostic value. In a subgroup analysis (n = 47) excluding those patients who received conventional chemotherapy alone, patients with del17p had significantly shorter PFS and OS compared to those without del17p (Figure 3A, 3B). Additionally, patients with complex karyotypes showed a trend towards poor survival outcomes compared to those without complex karyotypes (Figure 3C, 3D). 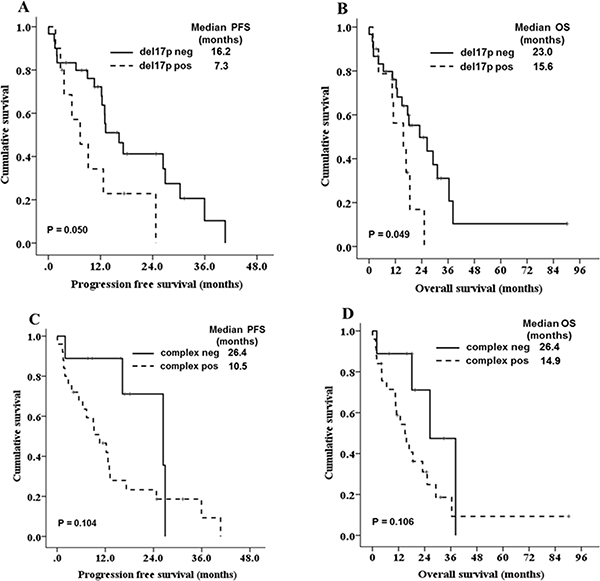 Figure 3: Kaplan-Meier survival curves for PFS and OS according to del(17p13) (A, B) and complex karyotype (C, D) in patients (n = 47) except those who received conventional chemotherapy alone.

Over the last two decades, the development of more effective agents and increased use of ASCT have resulted in improvements in survival outcome in patients with MM. However, this improvement did not clearly translate to patients with pPCL. The optimal induction therapy for pPCL patients is still unclear and survival outcome is insufficient compared with MM. A few retrospective studies have shown that treatment with novel agents induced higher response rates and prolonged survival than conventional chemotherapies. The Italian GIMEMA Multiple Myeloma Working Party reported a retrospective study of 29 patients with pPCL who were treated with frontline therapy with bortezomib. A bortezomib-based regimen was effective with an ORR of 79%, including ≥ VGPR (very good partial response) in 38% [17]. Additionally, a prospective study with lenalidomide and dexamethasone for pPCL resulted in an ORR of 73.9%, with at least 39% VGPR in 23 patients with pPCL [18]. In the present study, induction therapy with novel agents decreased the EM rate and increased the response rates compared with conventional therapy. Bortezomib- or thalidomide-based regimens achieved ORRs of ~70%, and combination treatment with bortezomib and thalidomide achieved more than PR in all patients. In a report of two cases with secondary PCL, combined therapy with bortezomib, lenalidomide, and dexamethasone resulted in CR [19]. Thus, a combination of novel agents such as bortezomib and thalidomide, or bortezomib and lenalidomide, seems to be very promising as a front-line therapy for pPCL.

Although frontline therapy with novel agents decreased the EM rates and increased the response rate in our study, it did not significantly improve the survival in patients with pPCL. The most improved survival was achieved in patients who received treatment with novel agents incorporated with ASCT. There are limited data on the role of transplantation in pPCL. The largest reported study is a retrospective analysis of 272 patients who underwent ASCT by the European Group for Blood and Marrow Transplantation [20]. A higher proportion of patients with pPCL than MM patients were in CR at day 100 post-transplantation (41.2% vs. 28.2%, P < 0.001), but median PFS and OS were significantly shorter compared with MM (PFS: 14.3 vs. 27.4 months, OS: 25.7 vs. 62.2 months). In a study of 97 patients with pPCL who underwent ASCT by the Center for International Blood and Marrow Transplant Research, PFS and OS at 3 years were 34% and 61%, respectively [21]. These studies support that ASCT resulted in deep responses and played a role in relatively prolonged remission. However, early relapse after transplantation is a major hurdle to overcome to improve survival in pPCL. Recently, results of a prospective study to evaluate the efficacy of an alternative regimen that combined induction therapy with bortezomib and ASCT followed by allogeneic SCT or bortezomib/lenalidomide maintenance was reported [11]. There 40 patients with pPCL received alternative induction therapy with PAD/VCD; the ORR was 69%, including 10% CR and 26% VGPR. After transplantation, 92% of patients achieved more than PR. The median PFS and OS were 15.1 and 36.3 months, respectively. While 35% of patients experienced relapse after allogeneic SCT, only 1 of 7 patients who received maintenance therapy relapsed. Although small in number, lenalidomide maintenance therapy after transplantation could be beneficial in reducing early relapse and improving the duration of remission in pPCL. Thus, rapid reduction of tumor burden with novel agents and ASCT followed by maintenance therapy may be a successful treatment strategy in patients with pPCL.

In conclusion, induction therapy with novel agents decreased the EM rate and increased the response rates in patients with pPCL. Additionally, performance of ASCT resulted in deep responses and had a role in relatively prolonged remission in pPCL patients who were eligible for ASCT. However, remission duration of pPCL was still shorter than in MM. Consolidation/maintenance treatment with novel agents may be helpful in improving the survival. Additionally, larger prospective studies are needed to establish the optimal treatment strategy and to identify prognostic factors in pPCL.

We collected the data retrospectively on patients with pPCL diagnosed at the participating centers of the Korea Multiple Myeloma Working Party between February 1998 and December 2015. The diagnostic criteria for PCL are the presence of > 2 × 109/L peripheral blood plasma cells or plasmacytosis accounting of > 20% in a differential white blood cell count [4]. In this study, we excluded secondary PCL that developed from relapsed or refractory MM. To investigate the clinical characteristics at diagnosis, data for patients with pPCL who were treated or not treated were collected. Treatment regimens, response rates, and survival outcomes were analyzed in patients who were treated. Clinical staging was performed using the ISS. Cytogenetic abnormalities were assessed by conventional cytogenetic studies or fluorescent in situ hybridization (FISH). Treatment response was assessed according to the International Myeloma Working Group criteria [4]. ORR was defined as PR or better. This study was approved by the Institutional Review Board of each participating hospital in accordance with the Declaration of Helsinki.

Discrete and continuous variables were evaluated using Fisher’s exact test and the Mann–Whitney U–test, respectively. Progression-free survival (PFS) was calculated from the start of treatment to disease progression, or deaths resulting from any causes other than disease progression censored. OS was defined as the period from the date of diagnosis to the date of the last follow-up or death from any cause. PFS and OS were evaluated using Kaplan-Meier estimates and compared using the log-rank test. The estimate of the relative risk of event and its 95% confidence interval (CI) were estimated using the Cox proportional hazard model. Covariates having a P-value < 0.1 in the univariate analyses were included in a Cox proportional hazards regression model. All statistical computations were performed using SPSS software (ver. 21; SPSS Inc., Chicago, IL, USA). A P-value < 0.05 was considered to indicate statistical significance in all analyses.