Exosomes in diagnosis and therapy of prostate cancer

Prostate cancer is a common solid malignancy and has high mortality [1]. Exosomes are small extracellular vesicles (EV) ranging from 50 to 150 nm in diameter. Exosomes have a double membrane structure with various cargo contents, such as miRNAs, mRNAs, proteins, lipids and viral particles [2]. Exosomes are released by the exocytosis of multivesicular bodies (MVBs) (Figure 1) [3]. The materials in vesicles can be transferred and alter signaling pathways in the recipient cells [4]. Exosomes are present in human body fluids such as the blood, urine and saliva, and can be isolated from cell culture medium [5]. The lipid bilayer membrane of exosomes protects their cargo from RNases and proteases, which allows them to act as good delivery vector in therapy [6]. 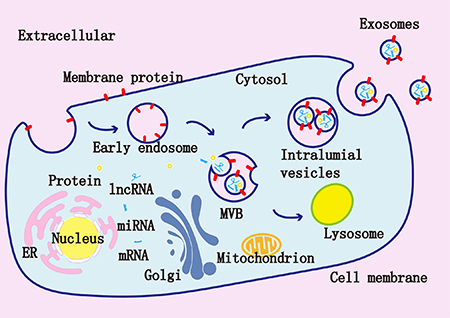 Figure 1: Exosomes are composed of a lipid bilayer and a variety of molecules derived from their original cells such as miRNAs, mRNAs, and proteins. Inside the cells, early endosomes are formed via endocytosis, early endosomes then develop to late endosomes, which form multivesicular bodies (MVBs) via the invagination of the membranes. The intraluminal vesicles (ILVs) are present in MVBs. Finally, MVBs fuse with the cell membrane and the ILVs will be released as exosomes.

Cancer cells derived exosomes are also involved in the regulation of signaling pathways. C-Src, insulin-like growth factor I receptor and focal adhesion kinase are enriched in exosomes [27]. Androgen receptor (AR) can mediate the transcription of genes involved in prostate cancer cell proliferation and survival [28]. CD9 is an upstream regulator of AR, and exosomes can deliver CD9 to modulate paracrine signaling to mediate the growth of androgen deprived prostate cancer [29].

In addition, prostate cancer derived exosomes carried integrin α3 and integrin β1 which promoted the migration and invasion of epithelial cells [38]. The integrin αvβ6 was transferred by exosomes and its expression was high in prostate cancer. The recipient cells will internalize integrin αvβ6 and express them on the surface [39]. Integrin αvβ3 is highly expressed in many types of tumor and promotes the metastatic phenotype. In prostate cancer cells, integrin αvβ3 was co-expressed with synaptophysin which was considered a biomarker for aggressive neuroendocrine prostate cancer [40]. These exosomal integrins will activate Src phosphorylation and increase the expression of pro-inflammatory S100 in recipient cells, and have the potential to predict organ-specific metastasis [41].

The epithelial-mesenchymal transition (EMT) plays a pivotal role in the conversion from benign to malignant cancers. Cancer derived exosomes can promote EMT via miRNAs and prepare the pre-metastatic niche [42]. Several signaling pathways such as TGF-β1, Wnt, EGF and HGF participate in the induction of EMT [43–46]. The exosomes from human breast milk could promote EMT via TGFβ2 [20]. miR-409 in exosomes from prostate cancer promoted EMT through the repression of tumor suppressor genes such as Ras suppressor 1 and stromal antigen 2 [23].

Metastasis is a highly inefficient process. Only 0.01% circulating tumor cells (CTCs) shed from the primary tumors into the bloodstream and lymphatics can form metastatic lesions in distant organs [47]. EMT markers such as twist and vimentin were expressed at higher levels in CTCs of patients with metastatic breast cancer than in those of patients in the early stage [48]. Metastases-initiating cells (MICs) are special CTCs with sternness and enhance the growth, survival and colonization of prostate cancer cells in distant metastatic organs [11]. MICs have the ability to alter tumor microenvironment to promote reprogramming of non-tumorigenic prostate cancerous and non-cancerous epithelial and stromal cells, leading to their transformation and de-differentiation [49, 50]. Exosomes derived from MICs can promote EMT of prostate cancer cells through the activation of RANKL, FOXM1, and c-Myc [11].

AR is a key transcription regulator that is highly expressed in prostate cancer. AR isoform encoded by splice variant 7 lacks the ligand-binding domain and is associated with the resistance to hormonal prostate cancer therapies, especially enzalutamide and abiraterone [56]. Androgen-receptor splice variant 7 messenger RNA (AR-V7) can be isolated from exosomal RNA in the blood and is a valuable resistance marker [56].

Exosomes for the diagnosis of prostate cancer

Present diagnostic markers such as prostate specific antigen (PSA) and carbohydrate antigens have substantial drawbacks such as false-negatives, false-positives and lack of tumor-type specificity [57]. Tumor biopsy is the only definitive method of diagnosis, but it is invasive. Novel prostate cancer biomarkers are required for clinical application. Exosomes can be isolated from human body fluids such as the blood, urine and saliva [58].

Exosomes can protect miRNAs against RNase degradation [59]. Huang et al. found that miR-1290 and miR-375 had the potential of predicting the prognosis of castration-resistant prostate cancer [60]. Exosomal miR-34a could induce docetaxel sensitivity in docetaxel-resistant prostate cancer cells by inhibiting Bcl-2 [30]. Exosomal miR-34a can be used as a predictive biomarker for the response to docetaxel [53]. A recent study showed that miR-182 of miR-183 cluster family was detected in prostate cancer cells derived exosomes from the serum [61].

Noninvasive and simple diagnostic assays are required for prostate cancer diagnosis. A novel noninvasive Urine Exosome Gene Expression Assay has been applied to reduce the number of unnecessary biopsies [69]. Moreover, a PCR-free efficient diagnostic method was developed for simultaneous and multiplexed detection of exosomal miRNAs [70]. These improvements of detection technology facilitate the application of exosomes for prostate cancer diagnosis.

A new tool was developed for intracellular delivery of target proteins which was named exosomes for protein loading via optically reversible protein–protein interactions (EXPLORs) [71]. Nanoscale exosome-mimics (EMs) could be designed to produce sufficient quantity of vectors used for drug or gene delivery in cancer therapy [80]. A recent study showed that exosomes engineered as doxorubicin delivery platform for targeted therapy achieved high therapy efficiency [81]. However, all these studies are in the experimental stage. Further preclinical studies are needed to validate the potential of exosomes in prostate cancer therapy. 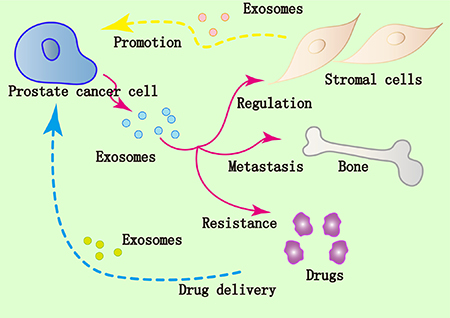 This study was supported by grants from Jiangsu Province Science Foundation of China (No BK2007032), the Project of Invigorating Health Care through Science, Technology and Education and Jiangsu Provincial Medical Youth Talent.