From 1990 to 2013, ranking of viral hepatitis on leading death causes worldwide rose from the tenth to seventh [1]. Despite the availability of an effective vaccine and antiviral approaches, more than 250 million people suffer from chronic hepatitis B (CHB) infection and nearly one million deaths occur each year owing to complications worldwide [2, 3]. Genomic mutations including drug-resistant mutants and vaccine-escape mutants (G145R, G145A, F134L and others) hinder the treatment and prevention of hepatitis B virus (HBV) infection [2]. Prospective studies revealed chronically infected HBV patients had an up to 100-fold increased risk for progressing to hepatocellular carcinoma (HCC) [4]. Genomic mutations were significantly involved in the development of HBV-related HCC. P203Q and S210R which are mutations in HBsAg C-terminus hamper HBsAg-secretion and correlate with increased cellular proliferation and HBV-induced HCC [5]. A meta-analysis performed by Tian T et al. indicated that miR-146a C>G increased HBV-related HCC risk while miR-196a-2 C>T decreased the risk of HBV-related HCC, especially in the Chinese population [6]. A retrospective study found the AG genotype and G allele for A3G rs8177832 polymorphism related to a decreased risk of CHB and HBV-related HCC and TT genotype of rs2011861 polymorphism confer to an increased risk of HBV-related HCC [7].

Interleukin-18 (IL-18), firstly described as interferon (IFN)-gamma inducing factor, is one of the members of the IL-1 cytokine superfamily [8, 9]. IL-18 modulates the Th1 response together with IL-12 to produce IFN-gamma [10]. It has been shown that IL-18 can also influence Th2 response in synergy with other Th2-stimulating factors [11]. Thus, IL-18 is capable of increasing the activity of both Th1-type and Th2-type CD4+ T cells depending on its cytokine milieu [12]. CD4+ T cells can contribute directly to disease pathogenesis and inhibit viral replication during HBV infection [13]. Cytotoxic T lymphocytes can directly recognize and kill infected hepatocytes [14]. IL-18 plays a part in the clearance of viruses, partly by the induction of cytotoxic T cells [15]. All the findings suggest IL-18 may be associated with HBV and HCC. Human IL-18 gene is located on chromosome 11q22.2–22.3 and contains six exons. Within the promoter region of the IL-18 gene, two polymorphisms (rs187238 and rs1946518) have been identified, which influence the transcriptional activity of the IL-18 gene [16]. Previous studies demonstrated an significant association between rs1946518 polymorphism and various diseases risk, such as asthma, Crohn’s disease and breast cancer [17–19]. Rs1946518 polymorphism was also suggested to be associated with hepatitis C virus (HCV) infections [20]. Hass SL et al. found though different genotypes of the two SNPs distributed equally in HCV patients and health controls, they were related to treatment response in hepatitis C patients [21]. Li Y et al. found no association between the two SNPs and HBV recurrence after liver transplantation in Chinese Han people [22].

Several researches have studied the impact of the two polymorphisms on HBV-induced liver diseases, but no consistent conclusions had been achieved [23–26]. The purpose of this study was to assess the relationship of rs187238 and rs1946518 polymorphisms and the risk of HBV-liver cirrhosis (LC) and HBV-related HCC in the northwestern Chinese population.

Table 3: Hardy-Weinberg equilibrium test for the rs187238 and rs1946518 polymorphisms in the control group

Association between IL-18 polymorphisms and the risk of LC

Table 4: Association between IL-18 polymorphisms and LC and HCC risk 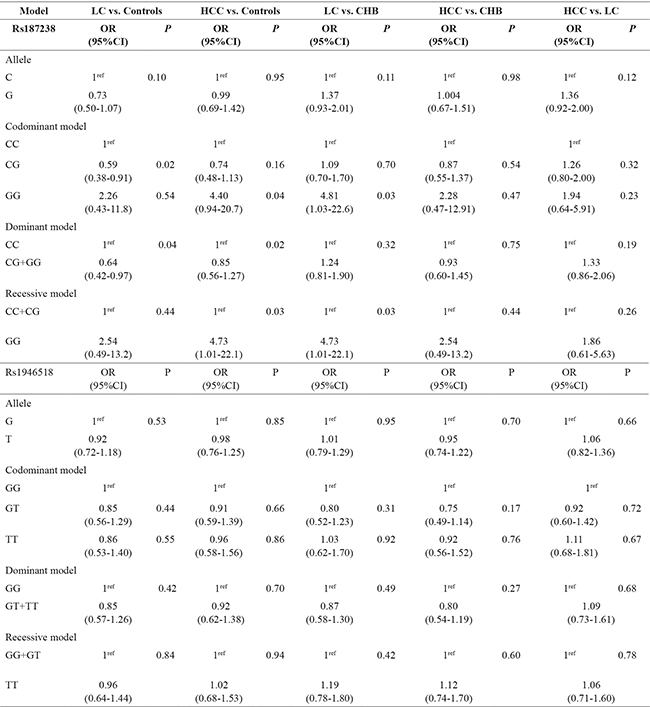 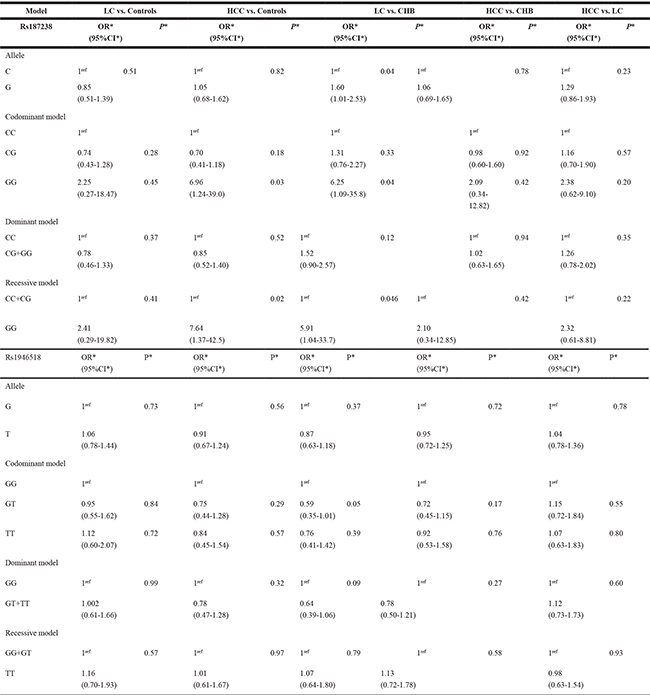 Association between IL-18 polymorphisms and the risk of HCC

Displayed in Table 5, neither of the two polymorphisms hampered or accelerated patients from LC progressing to HCC (Table 4). Adjusting for gender, age, smoking and drinking status did not have a meaning change (Table 5).

Table 6: Analysis of IL-18 haplotype frequencies with the risk of LC and HCC

Table 7: Analysis of IL-18 haplotype frequencies with the risk of LC and HCC adjusted by gender, age, smoking and drinking

Recently, the association between the two polymorphisms (rs187238 and rs1946518 polymorphisms) and HBV-related liver diseases were frequently researched. Lau HK et al. included 559 healthy controls and 342 HCC patients to investigate the relationship and finally found rs187238 GC and CC genotypes not only increased the risk of HCC, but also was responsible for vascular invasion and enhanced the prognosis in HBV-related HCC [34]. Rs1946518 polymorphism was associated with different outcomes of HBV infection and spontaneous clearance [35]. On the contrary, a retrospective research in Japan enrolled 204 HBV-infected cases from 1999 to 2003, of those 161 people developed to chronic progressive liver disease with 62 CHB patients, 52 LC patients, and 47 LCC patients [36]. A protect effect of -607AA genotype and -137C allele on the disease progression of HBV carriers was observed [36]. Rs187238C allele was related to HCC in codominant and dominant models and its C allele showed significantly lower promoter activities which may affect IL-18 production and further affect CHB progression [37]. However, several studies suggested reversed conclusions. Bao J et al. revealed rs187238 not rs1946518 polymorphism may be a protective factor against HCC [38]. The genotype and allele frequencies of rs1946518 polymorphism showed no significant differences between any two groups of healthy controls, CHB, and HCC groups [25]. A meta-analysis published in 2016, including eight studies about rs187238 polymorphism and seven studies about rs1946518 polymorphism, provided an evidence that the two polymorphisms had no influence on the risk of HCC in general or specifically of HBV-positive HCC [26].

Different from the previous studies, we enrolled 1000 people who were at different stages from health to HCC. The four groups did differ significantly in alcohol history and diabetes history. For LC patients carrying HBV, heavy alcohol consumption is a independent increased risk of HCC [39]. Lin CW et al. found in LC patients, the incidence of HCC was higher in patients with HBV infection and alcohol history than those with HBV infection or alcohol history alone [40]. Acetaldehyde, the ethanol metabolite, has carcinogenic characteristics by DNA binding [41]. Drinking-induced chronic oxidative stress and cytokine production could lead to LC and HCC development in the presence of chronic inflammation [42]. Alcohol could also promote HCC occurrence by deregulating the level of retinoic acid and S-adenosyl-L-methionine, and activing the Wnt/β-catenin pathway [43]. Diabetes could alter the hepatic function and the structure of the hepatocytes in the diabetic rats model, possibly by increasing hepatic oxidative stress, attenuating antioxidant capacity and further impairing liver [44, 45]. Our results indicated rs187238 GG genotype increased the risk of HCC in healthy population and the risk of LC in CHB carriers, and rs187238 CG genotype decreased the risk of LC in health population. Epidemiological studies had demonstrated several risk factors for liver cancer including tobacco exposure, alcohol consumption, diabetes mellitus, HBV and HCV infection [46]. Though there is a significant difference in diabetes history between healthy controls and cases, researchers had different opinions about the impact of rs187238 and rs1946518 polymorphisms on diabetes [32, 47]. So we controlled for age, gender, smoking and alcohol consumption to minimize any possible confounding of results by these factors and finally found health people with GG genotype still had a higher risk of HCC and CHB patients carrying GG genotype still had a higher risk of LC. But no association between rs1946518 polymorphism and HCC or LC risk was identified.

Our results should be interpreted with caution because of several limitations. Firstly, though we recruited 1000 samples in this study, the sample size of each group was relative small which may restrict its detail subgroup analysis by the clinical index.. Secondly, considering we just controlled four factors (age, gender, smoking and alcohol consumption), other factors including environmental background, treatment protocols and living habits may cause some bias. Thirdly, all participants were all from Shaanxi Province, China, which may not stand for all the Chinese population. Lastly, the fundamental experiments should be further conducted to validate our results and explore the possible mechanism.

In conclusion, our research revealed that rs187238 GG genotype increased the risk of HCC in healthy population and the risk of LC in CHB carriers. However, rs1946518 polymorphism had no impact on CHB-related liver diseases. These results indicated that IL-18 rs187238 polymorphism may be involved in the progression of CHB-related diseases in Northwest Chinese population.

This study was approved by the Ethics Committee of the Second Affiliated Hospital of Xi’an Jiaotong University (Xi’an, China). The research protocol was completed according to the approved guidelines.

For the current analysis, we established a case-control study of 250 healthy controls, 250 CHB carriers, 250 LC patients and 250 HCC patients. HBV infection was detected by ELISA method that requiring positivity of serum HBsAg and serum negativity for anti-HCV. LC patients and HCC patients were confirmed by pathological diagnosed. All the subjects were from the Second Affiliated Hospital of Xi’an Jiaotong University, and Xijing Hospital of Fourth Military Medical University, Xi’an, Shaanxi Province, China. Every participant was interviewed in-person including questions on age, demographics, ethnicity, height and weight, smoking and drinking habits, and medical history. Blood samples were collected after interview.

The samples were centrifugated and stored in −80°C freezers for long-term storage. The genomic DNA was extracted and concentrated by the method described in our previous studies [48, 49]. Two tag-SNPs (rs187238 and rs1946518) were selected in this study. SNP genotyping was performed by the Sequenom MassARRAY RS1000, and the primers were listed in Table 8. The data analyses were completed by Sequenom Type 4.0.

Table 8: Primers used in this study

All the statistical analyses were completed using the SPSS software package (version 20.0; SPSS Inc., Chicago, IL, USA). HWE was examined by comparing expected and observed frequencies using Alrlquin 3.1 program (L. Excoffier, CMPG, University of Bern, Switzerland). The genotype frequencies of observed values were compared with expected values obtained from HWE theory (p2+2pq+q2=1; p is the frequency of the wild-type allele and q is the frequency of the variant allele). Haplotype analysis was performed by PHASE v2.1 software. The calculation was performed by χ2 test and the degree of freedom was 1 in the cases and controls. The significant difference in allele and genotype frequencies between cases and controls was determined by Pearson’s χ2 test. ORs and 95%CIs were calculated with and without adjustment for gender, age, smoking and drinking. We evaluated the risk in the dominant model (AA+ Aa vs. aa), the recessive model (aa vs. Aa+AA), and the allele model (a vs. A) respectively (A: the major allele, a: the minor allele). A two-sided P-value < 0.05 was considered statistically significant in all the tests.