Conclusions: We have demonstrated the clinical significance of on-treatment ESR1 mutations both in a snapshot and serially in comparison with PIK3CA mutations.

Approximately 80% of breast cancers (BCs) express the estrogen receptor alpha (ERα), encoded by the ESR1 gene, and endocrine therapy (ET) with selective ER modulators (SERMs) or aromatase inhibitors (AIs) is the mainstay of treatment for this group of patients because of their effectiveness balanced against their side effects. However, ET resistance occasionally occurs during the treatment of early BC and inevitably results in metastatic BC (MBC) [1]. ESR1 ligand binding domain (LBD) mutations constitutively activate the ER in a ligand-independent fashion [2-4] and they have attracted attention as a mechanism of ET resistance in MBC. These mutations were originally reported almost two decades ago [5-8], and recent large-scale next-generation sequencing (NGS) revealed that ESR1 mutations are present in approximately 20-50% of metastatic tissue samples treated with endocrine agents while these variants are absent or only present at very low frequencies in primary tumor samples [2-4]. These features indicate that the presence of ESR1 mutations should be assessed in metastatic lesions. Circulating cell-free DNA (cfDNA) has been proposed to carry a comprehensive picture of metastatic tumor cells and genomic analysis of plasma cfDNA has been realized as a non-invasive method to quickly assess the mutational profiles and monitor molecular changes under treatment, using recent developments in digital genomic technologies [9]. Therefore, if ESR1 mutation status in cfDNA is predictive of response to ET, monitoring of this marker could be a useful method of informing treatment plans for subsequent metastatic disease.

PIK3CA is an oncogene that encodes the p110α component of phosphatidylinositol 3-kinase (PI3K) and PIK3CA is a representative frequently-mutated gene, whose frequencies are 20% to 40% of all BCs [10, 11]. Recently, in phase III randomized trials, the clinical significance of ESR1 mutations have been reported in the comparison with PIK3CA mutations. In alteration frequency in metastatic versus primary tumors in the BOLERO-2 cohort, Hortobagyi et al. demonstrated that PIK3CA mutations had the highest frequency in PBCs and MBCs and that ESR1 mutations had higher frequency in MBCs than in PBCs [12]. More recently, in the BOLERO-2 study, Chandarlapaty and colleagues found that 28.8% (155/541) of ER-positive MBC patients had ESR1 mutations in plasma cfDNA [13] and 43.3% (238/550) of ER-positive MBC patients had PIK3CA mutations in plasma cfDNA [14]. They also demonstrated that the difference of clinical features between ESR1 and PIK3CA mutations, namely, progression free survival (PFS) benefit of mammalian target of rapamycin (mTOR) inhibitor everolimus was maintained irrespective of PIK3CA mutations, but that was decreased according to the presence of ESR1 mutations [13, 14]. In another two phase III randomized trials, Fribbens and colleagues assessed ESR1 mutations in cfDNA using digital PCR (dPCR) [15]. ESR1 mutations were found in the plasma of 39.1% of patients (63/161) in the SoFEA study and 25.3% (91/360) in the PALOMA3 study. PIK3CA mutations were found in the plasma of 33% (129/395) of patients in the PALOMA3 study [16]. They also reported the effectiveness of the target drug by having the mutations or not. In the SoFEA study, patients with ESR1 mutations had improved PFS after taking fulvestrant compared with exemestane. In the PALOMA3 study, fulvestrant plus the CDK4/6-inhibitor palbociclib improved PFS regardless of the genomic status of ESR1 or PIK3CA [15, 16].

In this retrospective study, we demonstrated the clinical significance of on-treatment hotspot ESR1 LBD mutations both in a snapshot and serially in 185 plasma samples from 86 patients in comparison with the hotspot mutation status of PIK3CA using multiplex droplet dPCR (ddPCR) assays. To our knowledge, this is the leading comparative study to identify the clinical significance of multiplex ddPCR detection of ESR1 mutations and PIK3CA mutations in plasma samples.

We developed a sensitive and quantitative multiplex ddPCR assay to screen for 3 hotspot mutations in the LBD of ESR1. Figure 1A and Supplementary Figure S1 show the comparative analysis of a dilution series of each indicated synthetic ESR1 mutation oligonucleotide by ddPCR. We used serial dilutions of three hotspot ESR1 LBD mutant recombinant DNAs: ESR1 Y537S, Y537N, and D538G, and analyzed them using a multiplex ESR1 mutant detection probe, which could simultaneously detect ESR1 Y537S, Y537N, and D538G, confirming that this assay was able to detect as few as three copies of the mutant allele in an abundance of wild-type DNA. There was no cross-reactivity for the detection of each ESR1 mutations. 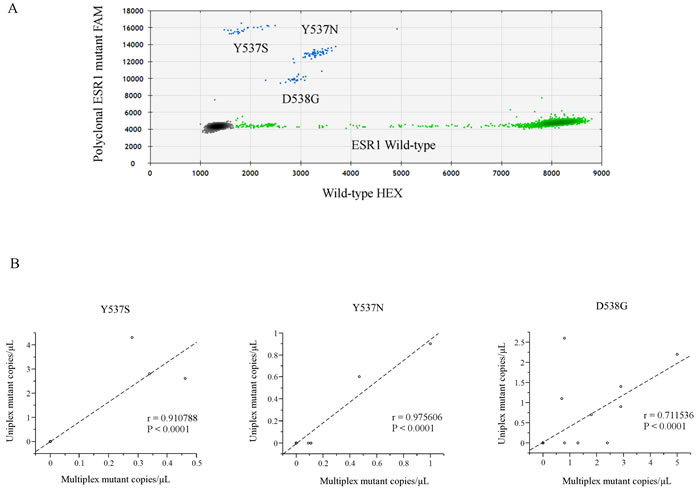 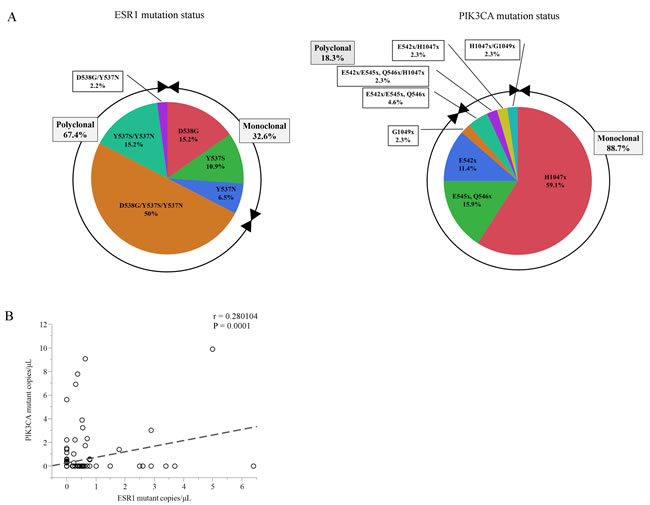 Association of ESR1 and PIK3CA mutations with clinical features

Table 2: Patients and clinicopathological characteristics associated with ESR1 and PIK3CA mutations in cfDNA of 69 MBC patients.

Association of ESR1 and PIK3CA mutations with clinical outcome

Table 3: Univariate and multivariate analysis of factors associated with discontinuity in endocrine therapy in women with breast cancer. 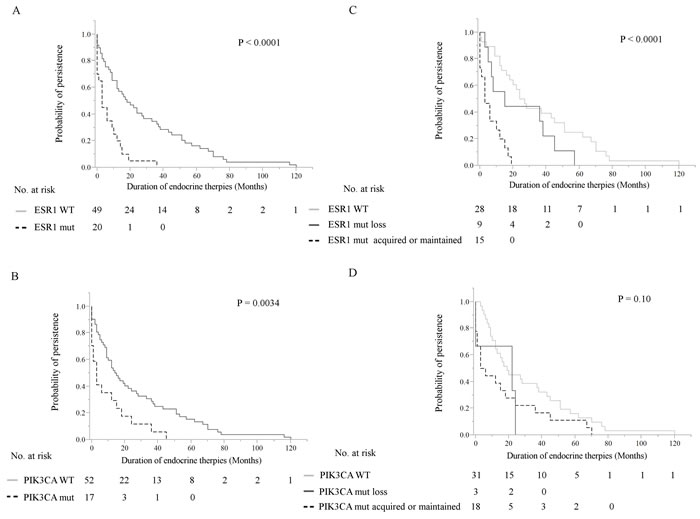 Table 4: Comparison between changes of ESR1 and PIK3CA mutations and each therapeutic drug in 52 MBC patients with longitudinal data. 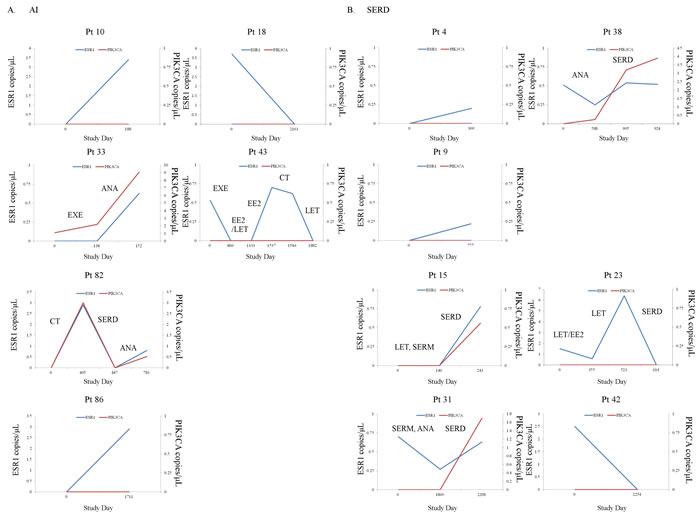 dPCR is a highly sensitive technique for detecting rare mutations, but analysis is on the basis of a single mutation per assay. For screening multiple mutations in a limited amount of sample, an assay to detect multiple mutations in parallel has been demonstrated with dPCR [15, 19, 20]. Here, we used multiplex ddPCR to study a cohort of patients treated with multiple lines of hormonal therapy to determine whether on-treatment ESR1 and PIK3CA mutations can be detected noninvasively and to examine the potential clinical importance of these mutations both in a snapshot and serially.

We verified that up to three mutations in ESR1 and up to 12 and five mutations in PIK3CA could be multiplexed into a single assay, which could detect the three most common mutations in ESR1 (Y537S, Y537N, and D538G) and 17 mutations in the 5 most common mutation sites of PIK3CA (E542K/V, E545V/G/A/Q/K, Q546L/R/P/E/K, H1047L/R/Y, G1049R/S) (Figure 1, Supplementary Figure S4). Toy and colleagues revealed the spectrum of ESR1 mutations from more than 900 patients and their potential differential impact (e.g. tumors driven by Y537S, but not D538G, E380Q, or S463P, were less effectively inhibited by fulvestrant in comparison with more potent and bioavailable antagonists, including AZD9496 [21]. Therefore, we examined the less frequent ESR1 mutations, E380Q (LBx® Probe ESR1 E380Q (A081), Riken Genesis, Tokyo, Japan) and Y537C (probe shown in [22]), but we could not detect them in our cohort. In validation assay, some of the mutations are found in the multiplex assay, but not using the uniplex assay (Y537N: 5 detection by multiplex, only 2 by uniplex) (Supplementary Table S1). Because the cut-off level of the presence of the mutation was 3 positive droplets in both multiplex and uniplex assay, this study had the possibility that uniplex assay could not detect a mutation due to less than the cut-off level, which could be detected as one of target mutations using multiplex probe.

The subjects of this retrospective study were a total of 185 plasma samples from 86 ER-positive patients, of which 151 plasma samples were from 69 MBC patients and 34 plasma samples were from 17 advanced PBC patients. Plasma ESR1 mutations were found in 28.9% (20/69) of MBC patients while plasma PIK3CA mutations were found in 24.6% (17/69) of MBC patients, with a distribution of mutations that was highly similar to previously published data [2-4, 19]. Interestingly, only 9 patients had both ESR1 and PIK3CA mutations over the all of treatment. These results were compatible with the recent report that PIK3CA was mutated in 37% (53/143) and ESR1 was mutated in 14% (20/143) of the ER-positive /HER2-negative MBC, in which only 9 had both mutations [23].

The present study has limitations. This was a retrospective, single-institute study, and was prone to selection bias. The studied population was heterogeneously treated and all plasma samples were taken at the time of disease progression, so that we had insufficient data to examine whether or not ESR1 mutation detection is dependent on specific hormone therapies. The samples used in this study were obtained for biobanking. Therefore, the time from blood draw to spinning, freezing plasma and then thawing may affect the variability of the data.

In conclusion, our study demonstrates the clinical significance of the burden of on-treatment hotspot ESR1 LBD mutations, both in a snapshot and serially in MBC patients in comparison with PIK3CA hotspot mutation status, using multiplex ddPCR assays.

A total of 86 patients (185 plasma samples) with breast carcinoma, treated at Kumamoto University Hospital between 2003 and 2016, were enrolled in this study. Cases were selected if archival plasma samples were available. Informed consent was obtained from all patients before biopsy or surgery. The Ethics Committee of Kumamoto University Graduate School of Medicine (Kumamoto, Japan) approved the study protocol. Adjuvant and neoadjuvant treatment was administered in accordance with the recommendations of the St. Gallen international expert consensus on the primary therapy of early BC [29-31]. The treatment of MBC patients was performed in accordance with the National Comprehensive Cancer Network Clinical Practice Guidelines in Oncology [26]. Recurrence was defined as the identification of positive spots by physical examination and/or by imaging diagnosis during the follow-up period. Patients were examined at the Kumamoto University Hospital or affiliated hospitals every 3 months for 5 years and every year thereafter and they were assessed monthly or at longer intervals depending on their disease status.

Blood collected in EDTA K2 tubes was processed as soon as possible and was centrifuged at 1,467 g for 10 min, with plasma stored frozen until DNA extraction. DNA was extracted from 500 μL aliquots of plasma using the ISOSPIN Blood & Plasma DNA kit (Nippon Gene, Tokyo, Japan) according to the manufacturer’s instructions. All DNA extracts were quantified using a NanoDrop 2000 spectrometer (NanoDrop Technologies, Wilmington, DE, USA) and purity was determined from the A260/A280 absorbance ratios.

Analysis of ESR1 mutations by ddPCR

We performed duplicate ddPCR assay on a QX200 digital PCR system (Bio-Rad laboratories, Hercules, CA, USA) using the assays as described previously [17, 32]. The PCR data were quantified as copies/μL and fractional abundance (allele frequency) using QuantaSoft™ software (Bio-Rad laboratories). A mutation was considered positive with more than three ESR1 mutant or PIK3CA droplets. The uniplex ddPCR method had been optimized beforehand by comparative analysis of a dilution series of synthetic copies of each indicated mutant ESR1 oligonucleotide, as reported previously [17, 22].

Immunohistochemical staining was carried out on 4-μm thick tumor sections. Serial sections were prepared from selected blocks and float-mounted on adhesive-coated glass slides for ERα, PgR, HER2, and Ki67 staining. Primary antibodies, their visualization methods, and their evaluation were as previously described [33].

The chi-square test or Fisher’s exact test was used to assess baseline differences between binary variables. Correlations were calculated using Spearman’s rank correlation coefficient. In the analysis of duration of ET effectiveness, the Kaplan-Meier method was used to estimate survival rates, and differences between survival curves were evaluated by the log-rank test. Cox’s proportional hazards model was used for the univariate and multivariate analysis of prognostic status. P values < 0.05 were considered a significant result. All reported P values are two-sided, and CIs are at the 95% level. All statistical analyses were two-sided and performed using JMP software version 10.0.1 for Windows (SAS institute Japan, Tokyo, Japan).

This work was supported in part by a grant-in-aid (project numbers 26461952 and 15K10057) for scientific research from the Ministry of Education, Science and Culture of Japan.

All the authors declare that they have no actual, potential, or perceived conflict of interest with regard to the manuscript submitted for review.