Materials and Methods: Serum DKK1 levels were quantified in 470 NSCLC patients, 140 with osseous metastases, 178 with extraosseous metastases, and 152 with early stage in complete remission. The Receiver Operating Characteristic (ROC) curve enabled us to identify a threshold value to distinguish patients with bone metastases.

Lung cancer is the leading cause of cancer-related mortality worldwide [1]. Late diagnosis is common, and the majority of patients present with metastatic disease. Bone is one of the predominant metastatic sites of lung cancer, accounting for 30%–40% of patients [2]. The presence of bone metastases is a poor prognostic factor that may induce clinical symptoms, such as pain, pathological fractures, paralysis and hypercalcemia, all of which adversely affect quality of life and treatment outcomes. Monitoring bone metastases is essential for lung cancer management.

Serum carcinoembryonic antigen (CEA) is considered a poor prognostic factor in early-stage non-small cell lung cancer (NSCLC) [3–13], but its role in advanced disease is controversial. In a study from Cedrés et al. (2011)[14] which included 277 advanced patients, high CEA levels at diagnosis were an unfavorable prognostic factor; however, these results were not replicated in studies from Kulpa et al. (2002) [15] and Ardizzoni et al. (2006) [16]. Therefore, novel and reliable prognostic biomarkers to complement CEA are urgently needed for clinical use in advanced NSCLC.

The Wnt/β-catenin pathway plays a crucial role in tumor pathogenesis, specifically in cell proliferation, angiogenesis, motility and invasiveness [17–19], and may also play an important role in the differentiation of osteoblasts [20, 21]. The activity of Wnt family ligands is antagonized by several secreted factors including Dickkopf (DKK). DKK1 blocks Wnt/β-catenin signaling by binding low-density lipoprotein receptor-related protein 5 and 6 and preventing receptor-ligand interactions [22, 23]. It has been reported that DKK1 produced by myeloma cells inhibits osteoblast differentiation in vitro, and increased DKK1 levels in bone marrow plasma and peripheral blood correlate with the presence of lytic bone lesions in myeloma patients [20]. It has also been suggested that breast cancer cells with over-activated Wnt/β-catenin signaling produce high levels of DKK1, which is involved in breast cancer-derived osteolytic metastases [24]. As our previous studies described, we have found that lung tumor cell derived DKK1 increases the level of β-catenin and negatively regulates osteoblast differentiation [25], indicating that lung cancer produced DKK1 may be an important mechanistic link between NSCLC and bone metastases.

However, whether serum DKK1 contributes to bone metastasis and can be used to predict the prognosis of advanced NSCLC patients has not been addressed. In this study, we investigated whether circulating DKK1 levels were associated with bone metastases in NSCLC and explored additional information relating to the severity and prognosis of NSCLC.

Table 1: Clinical features of all patients

To evaluate the clinical utility of serum DKK1 as a bone metastasis biomarker, we also measured the conventional tumor marker CEA in patients with stage IV. Serum CEA levels were abnormally elevated in 180 out of 287 (62.7%) patients, and significantly higher in the osseous metastases group than the extraosseous metastases group (P = 0.042). The optimum cutoff value for CEA was 3.03 ng/ml (AUC 0.577, 95% CI 0.511–0.644, sensitivity 81.3% and specificity 67.1%). ROC analysis showed that testing both DKK1 and CEA increased the detection accuracy for NSCLC bone metastases compared with CEA alone (AUC 0.797, 95% CI 0.746–0.848, sensitivity 82.9% and specificity 68.9%; DKK1 plus CEA vs. DKK1 alone P = 0.370; DKK1 plus CEA vs. CEA alone P = 0.0001). Thus, serum DKK1 had a greater AUC than CEA in patients with osseous metastases compared with patients with extraosseous metastases (Figure 1, Table 3). As determined by bivariate correlation analysis, the correlation coefficient between serum DKK1 and CEA levels was not significant (correlation coefficient 0.049; P = 0.407), also indicating that measuring both serum markers could improve the overall sensitivity for detecting bone metastases. 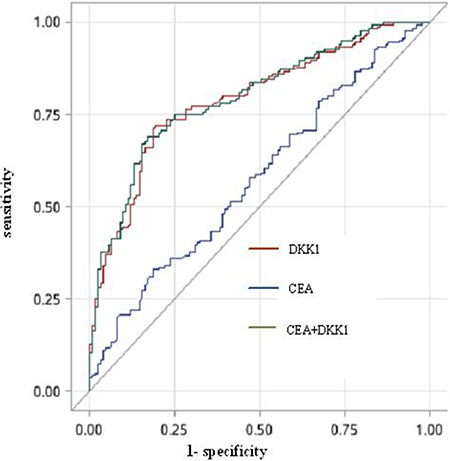 Table 3: Results for measurement of serum DKK1, CEA or both in detection of bone metastases 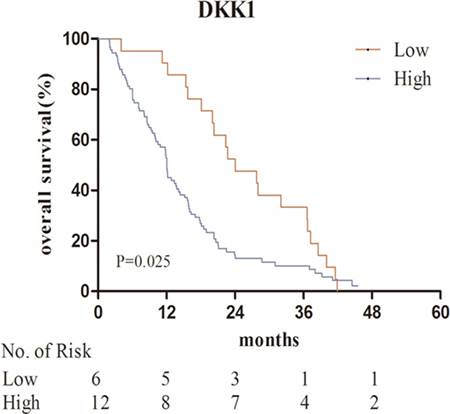 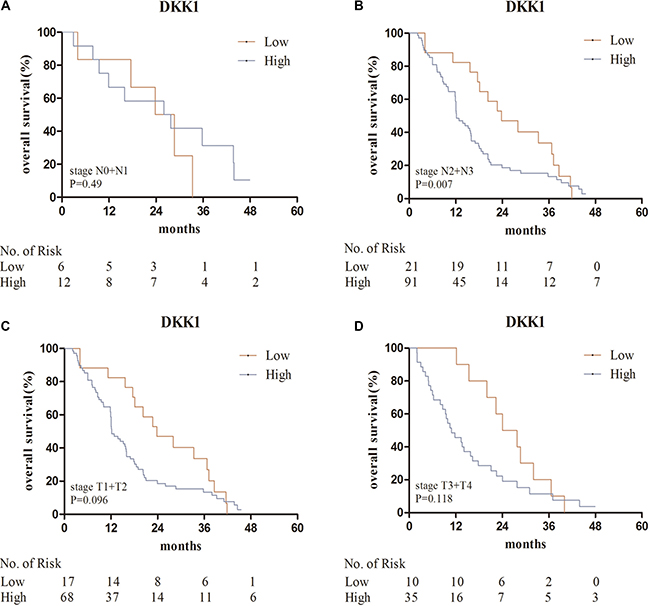 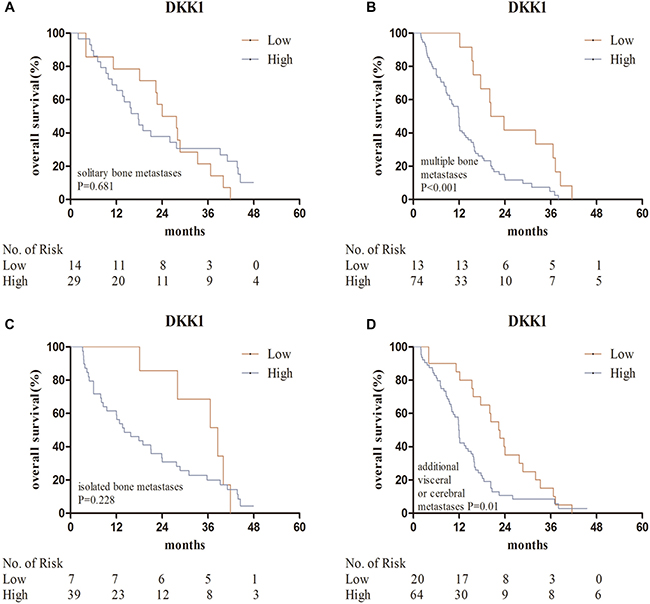 DKK1 is a potent inhibitor of Wnt/β-catenin signaling [18, 26, 27] and has also been shown to inhibit osteoblastogenesis in various osteogenic cell lines [20, 28–31]. Elevated serum DKK1 has been found to be associated with worse survival in cancers from multiple organs including the pancreas [32], stomach [33, 34], liver [35, 36], ovary [37], bile duct [38], bladder [39, 40], prostate [41, 42], breast [43, 44], cervix [45, 46] and esophagus [47, 48]. Meanwhile, several studies investigated the clinical and prognostic significance of serum DKK1 in NSCLC, and concluded that DKK1 levels increased with the presence of distant metastases, and correlated with poor overall survival [49–51]. Despite these studies, the involvement of DKK1 in lung cancer bone metastases was still unclear. In this study, we found that serum DKK1 levels were significantly higher in patients with bone metastases compared with patients with early stage in complete remission (P < 0.001) and patients with extraosseous metastases (P < 0.001). Using ROC curves drawn from our results, we obtained a sensitivity of 77.1% and a specificity of 71.4% for detecting NSCLC with bone metastases with a DKK1 cutoff level of 311.8 pg/ml. Combining serum DKK1 and CEA increased the sensitivity to 82.9%, significantly higher than CEA alone (P = 0.0001), and there was no correlation between CEA and DKK1. No statistically significant differences between serum DKK1 levels and different extraosseous metastatic sites (pleura, lung, brain, liver and adrenal gland) were found. The reason why serum DKK1 was slightly lower in pleura metastases group in comparison with non-pleura metastases group may be due to the limited number of patient samples. Furthermore, we found that patients with higher serum DKK1 levels were more likely to have multiple bone metastases. However, we also found that serum DKK1 levels did not differ significantly with metastatic pattern and the distribution of bone metastases. Our study suggested that elevated serum DKK1 level could be a marker for the presence of bone metastases in NSCLC, as well as breast cancer [43], multiple myeloma [52] and prostate cancer [53].

Serum samples were collected from 140 patients with osseous metastases, 178 patients with extraosseous metastases, and 152 patients with early stage in complete remission admitted to Shanghai Chest Hospital from October 2011 to April 2012. Blood samples were collected before any treatment, and stored at −80°C. The study was approved by the ethical committees of Shanghai Chest Hospital and informed consent was signed by each patient. The enrollment criteria for all patients in this study were as follows: 1) pathologically proven primary NSCLC diagnosis; 2) Eastern Cooperative Oncology Group performance status (ECOG PS) 0–2; 3) life expectancy not less than 3 months; 4) no history of other cancers.

Serum DKK1 levels were measured by enzyme-linked immunosorbent assay (ELISA) with an immunoassay kit (Miltenyi, Bergisch Gladbach, Germany) according to the manufacturer’s directions and measuring optical density at 450 nm. Results are reported as the concentration of DKK1 (pg/ml) in samples. Serum CEA levels were analyzed using a Quantitative assay kit (Roche Diagnostic GmbH, Basel, Switzerland) with an upper limit of 5 ng/ml defined as normal according to the kit’s manufacturer.

Overall survival (OS) was calculated from the date of diagnosis until the date of mortality or the last follow-up date. Differences in serum DKK1 levels between groups were assessed by t test. Correlations between serum DKK1 levels and clinicopathological characteristics were estimated using χ2 or Fisher’s exact test. Receiver operating characteristics (ROC) curves were constructed to assess sensitivity, specificity and respective areas under the curves (AUCs) with 95% confidence intervals (CIs). We investigated the optimum cutoff value by maximizing the sum of sensitivity and specificity. Survival curves were estimated using the Kaplan–Meier method, and the log-rank test was used to compute differences between the curves. Multivariate analysis using the Cox proportional hazards regression model was performed to assess the prognostic value of serum DKK1 levels. All P values were two-tailed, P < 0.05 was taken to be significant and 95% CIs for results were calculated, where appropriate. Data were analyzed using SAS 9.4 (SAS Institute, Cary, NC, USA).