Renal cell carcinoma (RCC) is the most common malignancy of the kidney, the frequency of which is increasing in both, men and women [1]. RCC has a worldwide incidence. It is reported that it is more common in men than women [2]. The exact causes of renal cell carcinoma have not been identified yet, but the evidence from clinical trials and medical experience built up over time reveals a strong connection between several risk factors such as gender, age and smoking [3] and alcohol intake [4] are among other lifestyle factors [5] that are known to increase the risk of RCC.

Genetic and hereditary conditions also increase the risk of RCC. The potential role of immune response in the risk of RCC has been provided [6]. Cytokines participate in mediating many of the effect or phases of immune and inflammatory responses. Recently, genetic polymorphisms potentially affecting production levels of certain cytokines may be important determinants of disease risk, severity or protection for several conditions in which the immune system plays significant roles, such as malignancies. Eventually, many studies have reported that there is an association between cytokine gene polymorphisms and the development of certain infectious diseases, allergies, autoimmune disorders and cancers. In some studies, these genetic polymorphisms are shown to affect to overall expression and secretion of cytokines both in vitro and sporadically in vivo systems [9]. Interleukin (IL)-4 is produced by activated T lymphocytes and associated with the similar immune responses [7]. IL4 is a multifunctional cytokine, which binds to IL-4 receptor (IL-4R) to mediate the differentiation of antigen stimulated T cells [8]. IL4 might be proved useful as antitumoral and anti-inflammatory agents [9].

Table 2: Basic information of candidate SNPs in this study

Table 4: Basic information of candidate SNPs in male and female

Table 6: Haplotype frequencies and their associations with RCC risk in total 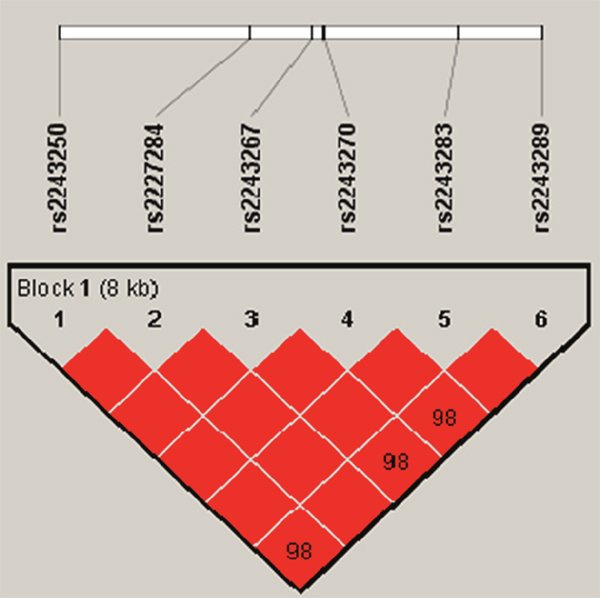 Figure 1: Haplotype block map for the IL-4SNPs genotyped in this study. The LD between two SNPs is indicated by standardized D´(red boxes).

In this study, we investigated whether the IL-4 gene polymorphism is associated with the risk of developing RCC in a case-control study. The obtained data illustrated a decreased RCC risk of individual carrying the “C” allel in rs2243250. Meanwhile, stratified analysis based on the age, gender, smoking status, drinking status revealed no significant association with RCC in age>55, female, smoking and nodrinking. However, for age<55, male, nonsmoking, and drinking status groups the SNPs polymorphisms were found obviously associated with RCC. We investigated the relationship between IL-4 gene polymorphism and RCC risk in Chinese population.

Currently, novel genetic and molecular predictors for the successful preventions and early diagnosis of cancers are needed [10]. Recent genetic studies have reported that many SNPs in cytokine genes are found are associated with a variety of diseases, including cancer [11]. Genetic polymorphism in cytokine genes was associated with the risk of development of certain types of cancer. Proinflammatory cytokines promote tumor development, and there is scientific evidence suggesting chronic inflammation can lead to the initiation and progression of cancer in a genetic controlled fashion [12].

It is found that there are lymphocytes, dendritic cells and macrophages infiltration in renal cell carcinoma, which suggests the immunogenicity of renal cell carcinoma [13, 14]. IL-4 is an anti-inflammatory immunosuppressive cytokine, which plays an important role in tumorigenesis and autoimmunity [15]. It is plays a central role to regulate the differentiation of antigen-simulated naive T cells, and then causes these T cells to produce cytokines, such as IL-10 and IL-14, or on the other hand, suppresses CD4+ T cells to secrete IFN-γ [16]. Hence, IL-4 has been seen as the focus of controversy in recent years due to the indeterminate biologic functions on cancers. However, variants in IL-4 and genes may effect on IL-4 signal transduction by change promoter activity of IL-4 gene and conformation of IL-4R protein directly or indirectly [17, 18]. Early studies suggested that IL-4 could help other cytokines or drugs to remove and suppress growth of tumor cells [19, 20]. Newly, studies have found that personality carrying the T allele of rs2243250 remarkably decreased the risk of colorectal cancer and gastric cancer, possibly by enhancing the Th2 responsed [21]. But, in the present study, we found that individuals carrying C alleles were associated with a significantly lower risk of developing RCC compared with the T allele.

The differences can be explained by the different mechanisms suggesting that different mechanisms of tumor development and the role of IL-4 genes in different tumors may be different. Thus, increased production of IL-4 may inhibit the proliferation of RCC in the early stages of the disease, but may cause Th2 cells to deviate and prevent immune surveillance of Th1 cells in disease progression. In addition, although IL-4 exhibited a proliferation inhibition effects in vitro of RCC [22, 23], the clinical use of IL-4 as an administrated agent failed to inhibit the progression of RCC and other cancers [24, 25]. Previously, Rosenwasser et al. [26] described that T allele of rs2243250 in IL-4 gene was associated with the increased expression of IL-4 in vitro. But IL-4 could not suppress the progression of RCC [24], even exhibit a possible “positive” activity of tumor progression.

Epidemiologic studies revealed a strong connection between smoking and drinking risk factors causes of RCC. Smoking caused by RCC, which may be caused by cigarette smoking induced immune suppression, so that RCC escape immune surveillance, thereby promoting the occurrence and development of RCC [27]. Studies have reported that between alcohol consumption and risk of RCC has a dose-dependent relationship, namely alcohol consumption to achieve a certain degree of risk exists only a small amount of alcohol, but can play the role of is beneficial to the body [28], this can be a very good explanation to our other hierarchical analysis results, the relative risk of drinkers for non-drinkers carrying the variant genotype and higher risk of RCC. These risk factors and genetic factors interact to affect the susceptibility of RCC. However, due to the limitations of data collection, the study of environmental factors is limited to smoking, drinking and other factors, so it is not able to completely analyze the interaction of gene environment. Therefore, it is necessary to carry out a complete analysis of the gene environment interaction, and to verify the results of the study.

In summary, we presented an association of IL-4 gene polymorphisms with RCC risk. And we found rs2243250(C/T) were associated with RCC risk. In addition we also found that for different gender, the risk of the individual is not the same. The loci we identified are likely to provide new insights into the etiology of RCC, especially differences in risk according to sex. These findings, after validation by larger studies, may help identify at risk populations for primary cancer prevention.

The case-control study included 291 patients with RCC and 463 healthy controls. Cases of RCC were confirmed by pathology in an ongoing study that began recruiting in the Affiliated Hospital of Xizang Minzu University, Shaanxi, China. The patient had no previous history of any other type of cancer. Control group were randomly selected for the same period in the same hospital. The control group had no history of cancer. We used face-to-face interviews by trained interviewers to obtain information on demographic data and related factors. Collected potential confounders mainly included tobacco smoking, alcohol use, family history and previous diseases. All subjects were Han Chinese. After signing the informed consent, from each person, each donor donated 5 ml of blood for genomic DNA extraction. This study was approved by the institutional review board of the Ethics Committee of Xizang Minzu University.

To ensure that the used controls were representative of the general population and to exclude the possibility of genotyping error, the deviation of the genotype frequencies of IL-4 SNPs in the controls from those expected under the Hardy-Weinberg equilibrium (HWE), was assessed using the χ2 test. Differences in the distributions of demographic characteristics, selected variables, and frequencies of genotypes of the IL-4 polymorphism between the cases and controls were evaluated by using the Student’s t-test or chi-square test. The association between IL-4 SNPs polymorphisms and the risk of RCC was determined by calculating the odds ratio (OR) at 95% confidence intervals (CI) for each polymorphism from unconditional logistic regression analysis with the adjustment for possible confounders. The risk of cancer will also be analyzed based on mean age, gender, smoking, alcohol consumption and calculating OR at 95% CI. P value of <0.05 was considered statistically significant.