Runt-related transcription factor 3 (RUNX3) has been reported as a tumor suppressor in some kinds of cancers. In the present study, hepatocellular carcinoma (HCC) microarray analysis showed that RUNX3 expression was significantly lower in HCC tissues compared with that in adjacent non-tumor tissues, and was negatively associated with metastasis and TNM stage. RUNX3 was an independently prognostic factor for 5-year overall and disease-free patient survival. Mechanically, RUNX3 repressed metastasis and invasion of HCC, and increased E-cadherin expression. RUNX3 also repressed microRNA-186 to increase E-cadherin expression. We demonstrated that miR-186 mimics attenuated RUNX3-induced increase of E-cadherin and inhibition of metastasis and invasion. In conclusion, RUNX3 suppressed HCC cell migration and invasion by targeting the miR-186/E-cadherin/EMT pathway. RUNX3 may be recommended as an effective prognostic indicator and therapeutic target for patients with HCC.

Hepatocarcinoma is the leading cause of cancer-associated death all over the world [1, 2]. Treatment outcomes for patients with hepatocarcinoma remain poor in spite of substantial advancements. Currently, the 5-year survival rate accounts for approximately 15% for hepatocarcinoma patients [3]. The metastatic tendencies, resistance to different treatments (such as targeted therapy, chemotherapy, radiotherapy), diagnosis at advanced stages and failure to respond to therapy predominantly contribute to the low survival rate [4]. Therefore, it is essential to find novel strategies to minimize the hepatocarcinoma metastasis.

RUNX3 is a member of Runt domain family members, and is localized on chromosome 1p.13-p36.11, and has an evolutionarily conserved 128 amino-acid domains [5]. RUNX3 binds to promoters or enhancers of genes to modulate gene expression involved in cell proliferation and differentiation [6, 7]. RUNX3 expression is often found in many types of cancers, and plays a tumor suppressor role in cancer development [8]. RUNX3 contributes to tumor initiation and metastasis in different biological behaviors, including EMT [9, 10], proliferation [11], migration and invasion [12]. However, the mechanisms of RUNX3 tumorigenesis and metastasis promotion are as yet unclear. Besides, E-cadherin expression is decreased in EMT of some cancers [13, 14]. In addition, miRNAs also regulate EMT by regulating related target genes [15, 16]. However, the role of RUNX3 in the miR-186/E-cadherin/EMT pathway was not elucidated.

In the present study, we investigated the relationship between RUNX3 expression and clinicopathologic features, in vitro and in vivo experiments were used to investigate the role of RUNX3 in HCC metastasis and E-cadherin expression. Moreover, we explored whether miR-186 overexpression affected RUNX3-induced E-cadherin increase and repression of HCC metastasis. This study will provide a potential therapeutic target for HCC patients. 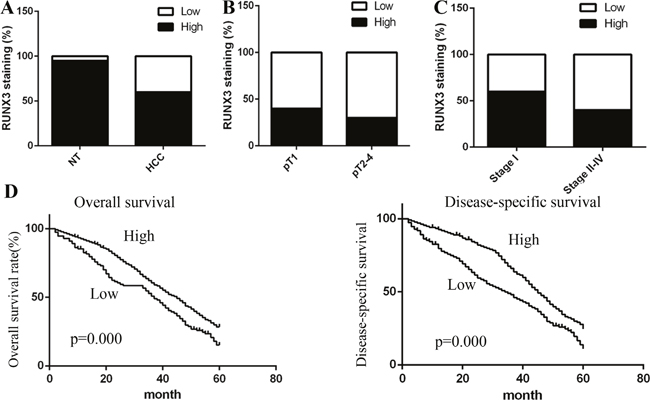 As shown in Table 1, we summarized the clinicopathologic parameters of 300 HCC patients. The expression of RUNX3 was inversely associated with depth of invasion (pT status; pT1 versus pT2-pT4) (P<0.001, Figure 1) and TNM stages (P<0.001, Figure 1). However, we observed no obvious correlations between RUNX3 and patient gender, age, tumor volume, or grade (Table 1).

Association between RUNX3 and patient survival 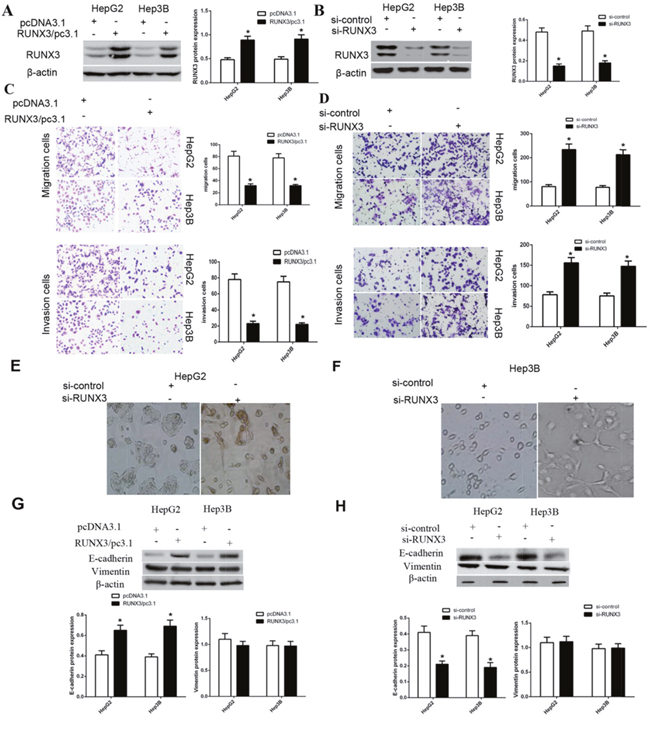 As shown in Figure 2E-2F, RUNX3 silencing altered cell morphology of HCC cells from a paving stone-like shape to a fibroblast-like spindle shape. Meanwhile, well-constructed cell-cell adhesion and mesenchymal cell phenotypes were lost. Since EMT was characterized by cancer cell migration and invasion, we detected the expression level of E-cadherin and Vimentin in cells with control or RUNX3 plasmids or control siRNA or RUNX3 siRNA. We found that RUNX3 positively modulated the expression of E-cadherin, while RUNX3 did not changed the expression of Vimentin (Figure 2G-2H).

Firstly, we demonstrated that RUNX3 can be stably and highly expressed in HepG2 cells (Figure 3A). We injected HepG2 cells infected with LV5-Control or LV5-RUNX3 into nude mice via their tail veins. And then, mice were euthanized after post-implantation 60 days, and surgically removed and fixed their lungs with 10% formal dehyde, and counts metastatic nodule number. We observed that lungs in LV5-RUNX3 nude mice had fewer and smaller detectable tumor nodules than control, indicating that RUNX3 reduces metastasis in nude mice model (Figure 3B). Next, we detected the expression of E-cadherin and Vimentin in metastatic nodule tissues of lungs. IHC analysis revealed that the expression of E-cadherin in the LV5-RUNX3 group was much higher compared with control. As expect, the expression of Vimentin was not changed (Figure 3C). 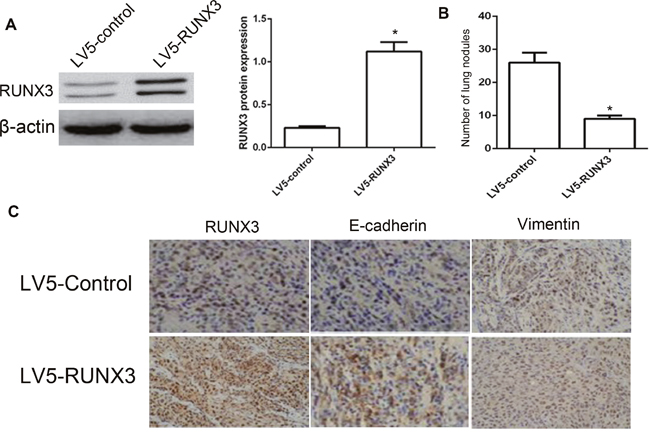 miRNAs have been identified to play an important role in the EMT processes, we applied a miRNA array to detected the miRNA profiles of HepG2 RUNX3 knockdown and control cells. We observed that 43 kinds of miRNAs were increased by over two-fold in HepG2 RUNX3 knockdown cells. And then we utilized the common algorithms to identify differentially expressed miRNAs, and validated that miR-186 could well bind to the conserved sites of E-cadherin 3’-UTR. So, we detect miR-186 expression in HCC cancer cells HepG2 and Hep3B with overexpressed or knocked down RUNX3 using qRT-PCR. Finally, we demonstrated that RUNX3 overexpression increased the expression of miR-186, while RUNX3 knockdown decreased the expression of miR-186 (Figure 4A-4B). Next, we analyzed the upstream region of miR-186 and identified one RUNX3 consensus binding sequences. We employed chromatin immunoprecipitation (ChIP), and found that inhibition of RUNX3 expression in HCC cancer cells reduced immunoprecipitated DNA from the miR-186 promoter, indicating that RUNX3 was able to bind the promoter of miR-186. 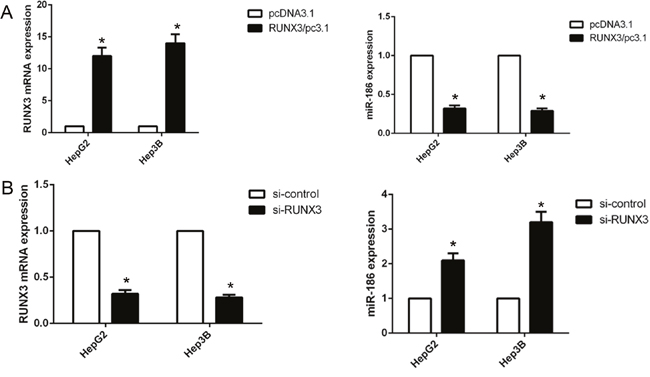 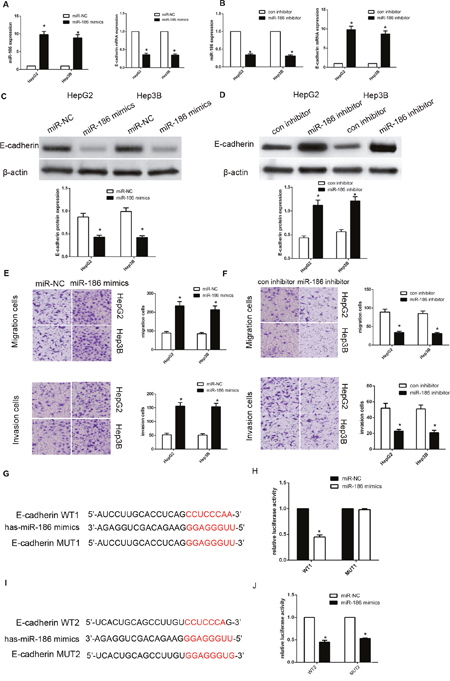 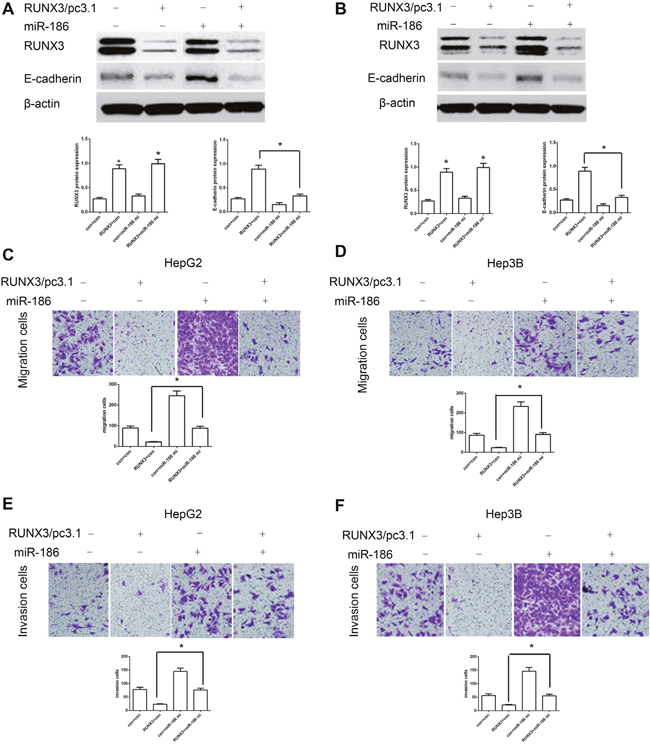 In recent years, the effect of RUNX3 on oncogenesis and metastasis has been widely reported [20]. RUNX3 has been identified to play multiple tumor suppressor roles in many kinds of human cancers, including gastric cancer, colorectal cancer, and breast cancer [11, 21–24]. Hypermethylation of CpG Island and point mutations were responsible for decreased RUNX3 expression [25]. However, the involvement of RUNX3 in development and metastasis of HCC was completely unknown. In this work, we investigated whether RUNX3 induces tumorigenesis and metastasis in HCC.

In the present study, RUNX3 expression was decreased in HCC tumor tissues compared with normal hepatocellular tissues. We further assessed correlations between RUNX3 expression and clinicopathological features, and verified that RUNX3 decrease was correlated with metastasis and TNM stage. Cox proportional hazards regression suggested that RUNX3 was negatively correlated with poor OS and DSS of HCC patients. Therefore, RUNX3 might play an important role in the progression of HCC and may predict the prognosis of patients with HCC.

In conclusion, our work identified that RUNX3 downregulation is involved into tumorigenesis and metastasis of HCC. Mechanically, RUNX3 negatively modulates miR-186 expression by directly binding miR-186 promoter, and miR-186 downregulates E-cadherin expression by directly binding its 3’UTR. We may provide a novel therapeutic target for HCC patients.

The study material includes 300 HCC and 35 adjacent normal hepatocellular tissues cases from The Second Affiliated Hospital of Dalian Medical University, treated between 2014 and 2015. All patients underwent surgery only or postoperative adjuvant therapy. The patients’ clinicopathologic information was obtained from the pathology department archive and was confirmed by hospital medical records. Follow-up information was obtained by reviewing patient medical records.

Cell extracts were separated on a 10% SDS-polyacrylamide gel and proteins were transferred to nitrocellulose membranes and incubated overnight at 4°C with the following antibodies: mouse anti-RUNX3, β-actin, rabbit anti-E-cadherin, Vimentin, SNAI2 or TWIST1. After incubation with peroxidase-coupled anti-mouse or anti-rabbit IgG at 37°C for 2 hours, membranes were washed and scanned using the Odyssey Two-Color Infrared Imaging System (LI-COR Biotechnology, Lincoln, Nebraska, USA). Each western blot was repeated three times.

RNA extraction was carried out using Trizol (Invitrogen) according to the manufacturer’s instructions. Real-time PCR amplification of RUNX3, E-cadherin and GAPDH was performed for 30 s at 95°C, followed by 40 cycles at 95°C for 5 s and annealing at 60°C for 34 s using an ABI PRISM 7500 Sequence Detection System (New York, USA). Target mRNA levels were calculated based on the CT method, normalized to GAPDH, and are expressed as a ratio of the percentage of gene copies to the GAPDH control. All reactions were run in triplicate. The primer sequences for each gene are as follows: RUNX3 Forward, 5’-TACCTGGCAAGTCCCTCCCGAACA-3’, Reverse, 5’-AGGCCTATATGGGTCCAAACTT-3’; E-cadherin Forward, 5’-TTCCTCCCAATACATCT CCC-3’, Reverse, 5’-TAACCGTTAGTAGTCACCCACC-3’; GAPDH Forward, 5’-ACCGCAATTGGGAGTCAGGATT-3’, Reverse, 5’-CCAATGTGTCCAGGAGGATT-3’.

The 204-bp miR-186 binding sequence at the human E-cadherin gene 3’ UTR was cloned into the XhoI and NotI restrictions sites downstream of the Renilla luciferase gene in the psiCHECK™-2 vector. Mutagenesis of the putative miR-186 binding sites was performed using the QuikChange site directed mutagenesis kit. Primer sequences are listed in Figure 5. Cells were seeded in 48-well plates and transiently transfected with appropriate reporter plasmids and miRNA using Lipofectamine 2000. Cells were harvested and lysed after 48 h. Luciferase activity was measured using the Dual-Luciferase Reporter Assay System (Promega, Madison, WI, USA), normalized to renilla luciferase. For each plasmid construct, transfection experiments were performed in triplicate.

HepG2 or Hep3B cells transfected with control siRNA or RUNX3 siRNA were cross-linked by incubation in 1% (v/v) formaldehyde-containing medium for 10 min at 37°C, then sonicated to form soluble chromatin. A RUNX3 antibody was used to precipitate DNA fragments bound by their corresponding elements. The protein–DNA complex was collected using protein A Sepharose beads (Millipore) and then eluted and reverse cross-linked. After protease K treatment, samples were extracted with phenol/chloroform and precipitated with ethanol. Recovered DNA was re-suspended in TE buffer and amplified by PCR. Primers used for ChIP assay were as follows: forward 5’-CACCTGTGAATTCTCTGACC-3’ and reverse 5’-TTCCGAATGCCCTAAGTTAG-3’, and control primers for GAPDH.

BALB/c nude mice were randomly divided into two groups of 8 mice each. LV5-Control and LV5-RUNX3 HepG2 cells were suspended in PBS. Mice were injected intravenously with 2.5×106 HepG2 cells in 0.2 ml of PBS via tail vein. After 2 months, mice were sacrificed and their lungs were resected and fixed in 10% buffered formalin. The number of metastatic nodules on the surface of each set of lungs was counted by visual inspection using a stereoscopic dissecting microscope.