DSBs are dangerous DNA lesions. If left unrepaired or repaired incorrectly, they may result in a massive loss of genetic information, chromosomal aberrations, or cell death. The eukaryotic DDR system allows cells to sense DNA damage and orchestrate appropriate cell-cycle checkpoints and DNA repair mechanisms [7]. DSBs activate the DDR by triggering the kinase activity of the ataxia telangiectasia mutated protein (ATM), thereby initiating a signaling cascade in which the adaptor protein mediator of DNA damage checkpoint 1 (MDC1) is recruited to DSB sites. MDC1 then amplifies ATM signaling activity and contributes to the recruitment and retention of additional DDR factors at sites of DNA damage [8]. Thus, MDC1 has been termed a master regulator, modulating the specific chromatin microenvironment required to maintain genome stability. Notably, loss of MDC1 impairs DNA repair, compromises genome integrity and enhances cancer susceptibility in mice [9, 10]. Also, a reduction or lack of MDC1 has been observed in breast and lung carcinoma cells in humans [11], an observation that has both clinical and mechanistic implications.

Several studies have also shown that microRNAs (miRNAs) are aberrantly expressed in human cancer tissues and that the modulation of miRNA expression levels may be a feasible therapeutic strategy for cancer [12, 13]. Because miRNAs modulate tumor sensitivity to radiation and anticancer drugs in cancer cells through regulation of DNA repair, identifying miRNAs that contribute to regulation of the DDR is important for the development of therapeutics aimed at modulating the response to radiotherapy or chemotherapy. To date, several miRNAs have been shown to be involved in regulation of the DDR by specifically targeting DNA repair proteins [5, 14–21]. Despite these observations, mechanisms involving miRNAs during DNA repair, especially under pathophysiological conditions, remain mostly undefined.

The purpose of this study was to identify miRNAs that regulate the cellular response to DNA damage in terminally differentiated cells and to determine their function. We examined miRNA expression and found that expression of miR-22 is upregulated in three terminally differentiated cell lines: MCF-7, HL60 and K562 cells. In previous work, we demonstrated that miR-22 regulates DSB repair through downregulaton of MDC1 expression [17]. Here, we have uncovered a new MDC1 regulatory pathway triggered by the c-Fos-dependent upregulation of miR-22 expression during terminal differentiation. Thus, we suggest that the c-Fos/miR-22/MDC1 axis-mediated downregulation of DSB repair induces chromosome instability during terminal differentiation and may represent a therapeutic target for cancer.

Fold change indicate the expression level of miRNA in TPA-treated cells compared to the untreated cells.

We therefore validated our array data on miR-22 by quantitative RT-PCR. Indeed, miR-22 was consistently upregulated during terminal differentiation of MCF-7, HL60 and K562 cells (Figure 1C). We then investigated MDC1 protein and mRNA expression in MCF-7, HL60 and K562 cells during terminal differentiation. Western blot analysis showed that the protein level of MDC1, but not of other DDR factors such as NBS1, was markedly reduced after TPA-differentiation in all three cell types (Figure 1D, upper panels). Quantification of MDC1 protein from three independent experiments revealed that the level of MDC1, measured after TPA induction, dropped by 6.7-fold in MCF-7 cells, 2.5-fold in HL60 cells, and 8-fold in K562 cells (Figure 1E). In addition, quantitative RT-PCR analysis of the same cells revealed a decrease in MDC1 mRNA levels, indicating that TPA-induced differentiation triggered MDC1 mRNA destabilization (Figure 1D, lower panels). We also treated another differentiation-inducing agent, retinoic acid (RA), with MCF-7, HL60 and K562 cells and measured miR-22 and MDC1 expression. Similar to TPA-treated cells, RA-treated cells also showed increased miR-22 expression and decreased MDC1 expression (Supplementary Figure 2A and 2B).

To test whether MDC1 is directly targeted by miR-22 during terminal differentiation, we tested the effect of miR-22 on luciferase expression from control or full-length MDC1 3′-UTR-containing reporter genes in MCF-7 cells during terminal differentiation. Luciferase activity was reduced more than two-fold by treatment with TPA when compared to control, while deletion of the miR-22 binding site abrogated this effect (Figure 1F). Collectively, these results strongly suggest that the expression of miR-22 is inversely correlated with the expression of MDC1 during cell differentiation and that miR-22 downregulates MDC1 expression at the post-transcriptional level. 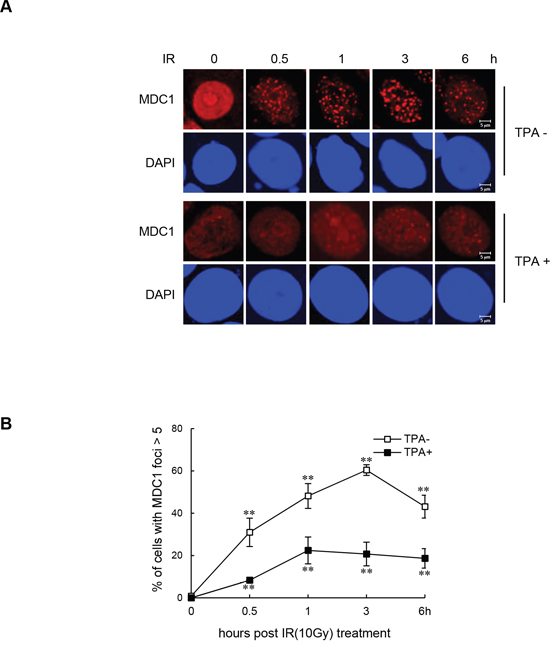 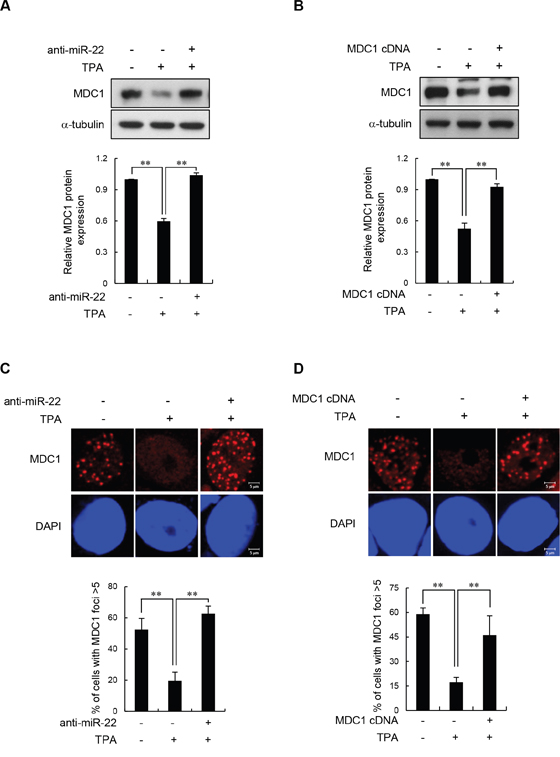 Figure 3: Effect of miR-22 on IR-induced MDC1 foci in differentiated MCF-7 cells. (A and B) Untreated and TPA-treated MCF-7 cells were transfected with anti-miR-22 (A) or miR-22-insensitive MDC1 cDNA (B). After a 24 h transfection, the cells were irradiated with 10 Gy IR. 3 hr after irradiation, the protein level of MDC1 was measured by Western blot (top). Quantitative densitometry of MDC1 protein expression is shown below, expressed as the mean ± s.d. (n = 3); ** P < 0.01. (C and D) MCF-7 cells underwent the same treatment as A and B and then were analyzed by immunofluorescence for MDC1 foci formation 3 hr postirradiation. DAPI was used for nuclear staining. In all panels, mean ± s.d. is shown; **P < 0.01 versus the control group.

We then asked how miR-22 expression is regulated during cell differentiation. Expression of miRNAs can be regulated at the transcriptional level between normal and pathological conditions. To determine which transcription factor(s) might influence miR-22 expression in differentiated cells, we performed an in silico analysis of the miR-22 promoter region (1.3 kb upstream of the miR-22 stem loop) using the transcription factor binding site program PROMO [30]. PROMO identified six c-Jun-binding sites at -1053 and -1047, -765 and -759, -547 and -540, -433 and -427, -207 and -200, and -43 and -36 nucleotides, and five c-Fos-binding sites at -1108 and -1099, -690 and -683, -578 and -571, -547 and -540, -532 and -525 nucleotides relative to the miR-22 stem loop (Figure 5A). c-Fos and c-Jun are members of a class of transcription factors that are related to activation protein 1 (AP-1). c-Jun proteins form homodimers or heterodimers with c-Fos proteins through their leucine-zipper domains. The different dimer combinations recognize different sequence elements in the promoters and enhancers of target genes [31]. Of note, c-Fos and c-Jun have been formerly described key transcriptional activators during terminal differentiation [32, 33]. Thus, we hypothesized that c-Fos and/or c-Jun might bind to the core elements of the miR-22 promoter and contribute to upregulation of miR-22 transcription in differentiated cells. To test this, TPA-differentiated MCF-7 cells were transiently transfected with either c-Jun siRNA, c-Fos siRNA, or siRNAs for both c-Jun and c-Fos, and then miR-22 expression levels were measured using quantitative RT-PCR. We observed that knockdown of c-Fos reduced miR-22 levels in TPA-differentiated MCF-7 cells, whereas c-Jun siRNA did not affect miR-22 level in these cells (Figure 5B). Moreover, knockdown of both c-Fos and c-Jun did not further suppress miR-22 expression relative to c-Fos knockdown alone. These data suggest that c-Fos is a key transcriptional regulator of miR-22 in differentiated MCF-7 cells. Most interestingly, transfection of c-Fos siRNA into TPA-differentiated MCF-7 cells restored the MDC1 expression that was suppressed in differentiated cells (Figure 5C). We also observed that the reduction of MDC1 protein expression by retinoic acid was restored by c-fos siRNA (Supplementary Figure 5). These results suggest that that c-Fos stimulates miR-22 expression, which in turn downregulates MDC1 expression during terminal differentiation. 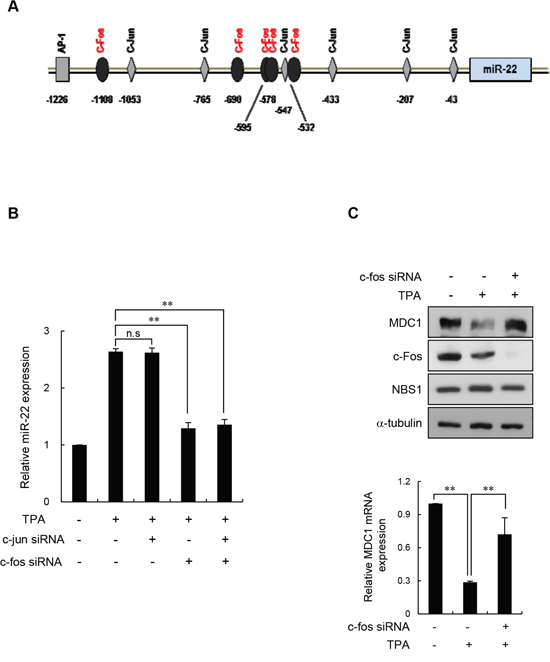 Differentiation-inducing agents, such as retinoic acid, are widely used for clinical cancer therapy and chemoprevention as differentiation therapy of human cancer [36–38]. Relapsed or refractory cancer that is resistant to differentiation-inducing agent is a clinically significant problem. Acquired resistance through genetic mutation is a major mechanism for cancer drug resistance and accounts to the short life of targeted therapy in human cancer. Mechanically, however, very little is understood about how resistant mutations are actually acquired during cancer therapy. Thus, identifying molecular mechanisms that regulate DNA repair activity in terminal differentiated cancer cells is crucial for cancer prevention and treatment, and the development of cancer sensitization therapy after chemotherapy or radiation therapy. In the present study, we have established that miR-22 is upregulated by the transcription factor c-Fos during terminal differentiation, establishing a linear signaling pathway: differentiation → c-Fos → miR-22 → MDC1. We demonstrated that c-Fos upregulates miR-22 expression in differentiated cells via direct binding to the miR-22 promoter, leading to downregulation of MDC1 and reduction in DSB repair, suggesting that c-Fos induces accumulated DSBs and prevents their repair, at least to some extent, through downregulation of MDC1 (Figure 6D). Thus, our findings suggest that c-Fos/miR-22/MDC1 might act as a sensitizer in cancer therapy and accompany anticancer drug or radiation therapy to enhance therapeutic efficacy and to improve the chance recovery from cancer.

Taken together, our results provide strong evidence that c-Fos dependent upregulation of miR-22 has an important role in regulating DNA repair in differentiated cells by repressing the DDR function of MDC1, promoting accumulation of DNA damage and an environment for genomic rearrangement. Elucidation of this mechanism offers opportunities for applications targeting miR-22 in therapeutic interventions.

Wild type segments of the 3′UTR of MDC1 containing putative miR-22 binding sites and deletion mutants of predicted miR-22 binding sites were cloned into pMIR-REPORT firefly luciferase vector (Applied Biosystems) as described previously [17]. For the luciferase activity assay, pMIR-REPORT luciferase vectors containing wild type or mutant 3′UTRs of DNA-PKcs and pRL-TK vector containing Renilla luciferase as a transfection control were co-transfected into MCF-7 cells using Lipofectamine 2000 (Invitrogen), and subsequently, the same cells were treated with 100 nM TPA. After 3 days, the luciferase assay was performed using the dual luciferase reporter assay system (Promega, Fitchburg, WI, USA) according to the manufacturer’s instructions. Luciferase activity was quantified using a luminometer (Glomax, Promega). The luciferase activity data were normalized to the Renilla value, and the results were represented as the average and standard deviation (SD) from triplicate of experiments.

For rescue experiments of differentiation, anti-miR-22 (miR-22 antisense-oligonucleotide (ASO), Panagene) and the pcRNA-HA-MDC1 construct were used. Cells were transfected with 50 nM anti-miR-22 or 1 μg of pcDNA-HA MDC1 using lipofectamine 2000 reagent (Invitrogen) according to the manufacturer’s instructions, and then same cells were treated with 100 nM TPA for 3 days. To analyze miR-22 promoter, MCF-7 cells were transiently transfected with c-jun siRNA, c-fos siRNA or both c-jun and c-fos siRNA using lipofectamine RNAiMax (Invitrogen), and subsequently, cells were induced differentiation by treatment of TPA. The siRNA target sequences were as follows: c-Jun siRNA, 5’-CGCAGCAGUUGCAAACAUUdTdT-3’: c-Fos siRNA, 5’-AGGAGAAUCCGAAGGGAAAdTdT-3’: Negative control siRNA (Bioneer, Korea), 5’-CCUACGCCACCAAUUUCGUdTdT-3’.

To visualize γ-ray-induced damage foci, cells cultured on coverslips were washed twice with PBS and fixed in 100% ice cold methanol for 10 min, followed by permeabilization with 0.3% Triton X-100 for 15 min at room temperature. Next, the coverslips were washed three times with PBS, followed by blocking with 0.1% bovine serum albumin in PBS for 1 h at room temperature. The cells were immunostained using primary antibodies and the appropriate secondary antibodies conjugated with Alexa Fluor 488- or Alexa Fluor 594 (green and red fluorescence, respectively; Molecular Probes, Eugene, OR, USA). The coverslips were mounted onto the slides using Vectashield mounting medium containing 4′, 6-diamidino-2-phenylindole (DAPI; Vector Laboratories, Burlingame, CA, USA). Fluorescence images were taken under a confocal microscope (Zeiss LSM 510 Meta; Carl Zeiss, Jena, Germany) and analyzed with Zeiss microscope image software ZEN (Carl Zeiss). Percentage was calculated among at least 100 cells by dividing the number of γ-H2AX foci or MDC1 foci-positive cells by the number of DAPI-stained cells.

Unpaired Student’s t-test was used to test for Statistical comparisons of data. The Data are presented as the mean ± SD. P value < 0.01 was considered to be statistically significant. GraphPad Prism (GraphPad Software, USA) and Excel (Microsoft) were used for the analyses.

We thank all laboratory members that provided input and advice on this project.