Cachexia is a multi-organ syndrome associated anorexia, inflammation and increased muscle protein breakdown that cannot be fully reversed by nutritional support, and leads to progressive functional impairment [3, 4]. Cachexia is associated with reduced tolerance to anticancer therapy and reduced survival [5, 6]. Historically, cachexia has been defined by weight loss [7]. Weight loss during chemotherapy is associated with reduced response rates and increased toxicity [5]. However, body weight measurement may be underestimated in patients who have gained weight because of edema or tumor mass [3, 8]. Likewise, body mass index (BMI) is used clinically to define underweight and cachexia [9]. However, because obesity is now prevalent in industrialized nations, it may be unclear whether cancer patients with a BMI < 20 are cachectic [10]. Thus, cancer cachexia is a complex condition that is not yet fully defined [11].

Hence, we investigated whether low skeletal muscle mass upon diagnosis and loss of skeletal muscle during palliative chemotherapy were associated with survival in patients with BTC. We also co-analyzed the dynamics of body weight and muscle depletion.

Of 598 initially-identified consecutive advanced BTC patients, this study included 524 patients with adequate CT images or existing BMI data undergoing palliative chemotherapy. The clinical characteristics of enrolled patients at initial assessment are shown according to sex in Table 1. The median age was 61 years (range, 26–87 years). There were 231 patients with ICC (44.1%), 162 patients with GB Ca (30.9%), 72 with extrahepatic BTC (13.7%), and 59 with AoV Ca (11.3%). Thirty-nine and nine tenths of a percent of patients were treated with gemcitabine/platinum, 37.6 % with 5-FU/platinum chemotherapy. The chemotherapies used are described in Supplementary Table 1. 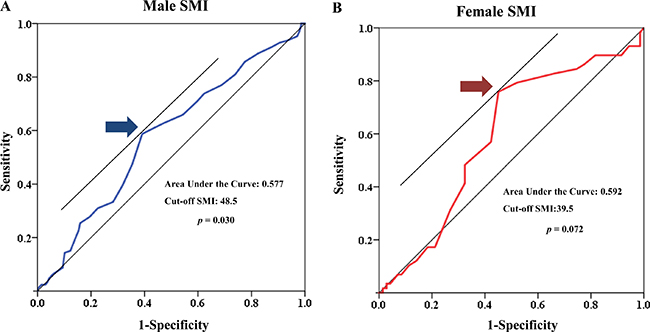 There were no significant differences in mean BMI values or the distribution of patients in BMI subgroups based on sex. The proportion of overweight or obese (BMI ≥ 25 kg/m2) men and women was 21.3% and 25.6%, respectively. 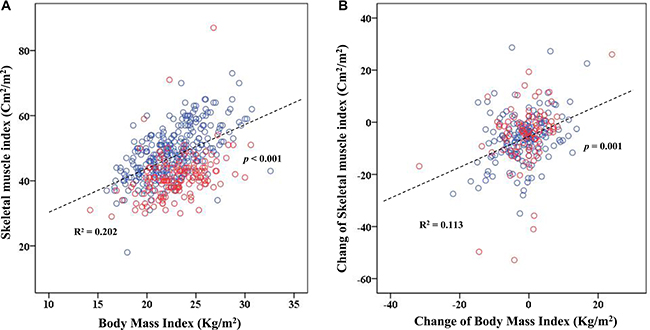 Factors related to a decrease in skeletal muscle index during chemotherapy 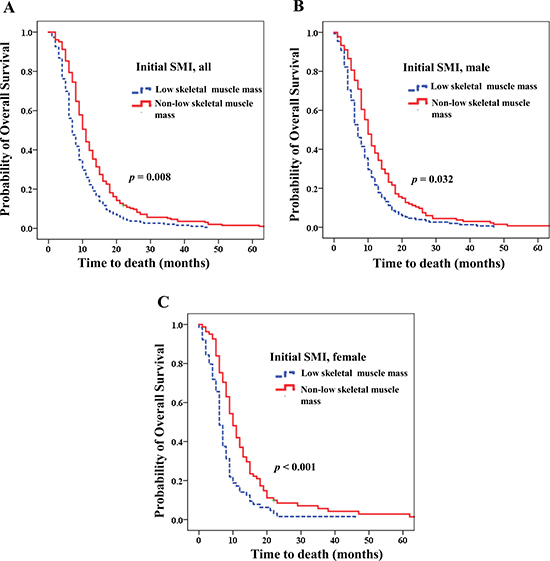 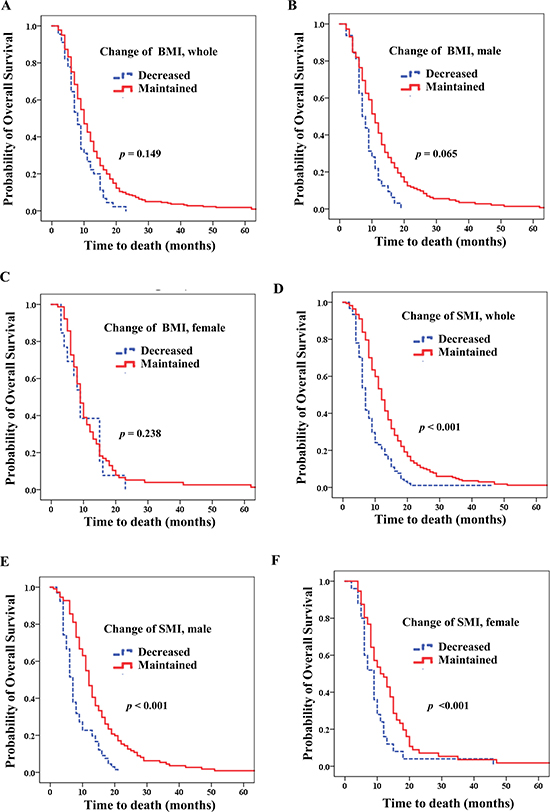 Low skeletal muscle mass and decrease in SMI were significantly associated with poorer OS than non-lower skeletal muscle mass and maintained in SMI via subgroup analysis according to ICC (p < 0.001 and 0.002, respectively; Supplementary Table 5). The number of patients with both initial SMI and BMI as well as progression SMI and BMI was 248. When we performed an analysis of these patients, the results were similar (Supplementary Table 6).

Correlation between BMI and SMI upon diagnosis

Table 5: Correlation of BMI and SMI at diagnosis 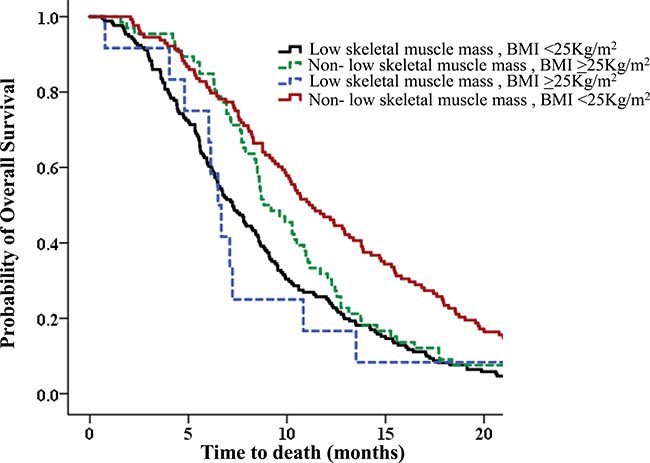 Correlation of changes BMI and SMI during chemotherapy

Table 6: Correlation of changes in BMI and SMI

Compared with a median OS of 12.0 months for patients with both SMI and BMI maintained during chemotherapy, decreased SMI was a poor prognostic indicator when BMI was maintained (median OS 7.0 months; HR, 2.186; p < 0.001; Table 6). However, for patients with SMI maintained during chemotherapy, decreased BMI had no effect on survival (p = 0.576). Analyses according to each sex (men, women) showed similar results.

In this study, we found that low skeletal muscle mass upon diagnosis and skeletal muscle depletion during chemotherapy predicted worse survival for patients with advanced BTC.

The influence of BMI upon diagnosis and change of weight (BMI) during chemotherapy is not well understood. One report has shown that obesity is associated with a high risk of BTC [20]. However, no report has analyzed BMI in BTC as predicting OS prognosis. Our study revealed that initial BMI upon diagnosis is not significantly associated with OS. However, based on sex analysis, a BMI upon diagnosis > 25 kg/m2 confers a poor prognosis for men. Furthermore, within the non-low skeletal muscle mass patient group, being overweight or obese (BMI > 25 kg/m2) leads to a worse prognosis (Table 5). Considering the above, although initial BMI is not prognostic in BTC, when considered along with the low skeletal muscle mass state, BMI might help to predict prognosis in BTC.

We showed that the decreased SMI during chemotherapy with decreased BMI was associated with a worse survival outcome (Table 6). Furthermore, while the decrease in BMI during chemotherapy did not significantly affect survival in the patients with maintained SMI (p = 0.714), a decrease in SMI was associated with reduced survival in the patients with maintained BMI (HR, 2.186; p < 0.001; Table 6). Analysis by sex showed similar results. Additionally, decreased BMI did not confer a significantly worse prognosis via multivariate analysis. Considering above, muscle depletion would be a more accurate prognostic factor than weight loss. However, considering muscle depletion along with weight loss might help to more accurately predict heterogeneous prognoses in BTC.

Our study also showed that muscle depletion varies according to the tumor origin of BTC (p = 0.008; Supplementary Table 3). The AoV Ca shows the lowest SMI decrease as compared to other primary tumors; thus, differences in OS between primary tumors in BTC might be associated with muscle depletion to some extent.

One previous report shows that median OS was significantly shorter in patients with low skeletal muscle mass (7.0 vs 2.0 months) in BTC [21]. However, this study analyzed only 29 patients and employed univariate survival analysis [21]. In contrast, our study enrolled a larger number of patients and employed multivariate survival analysis. Additionally, co-analysis was performed in our study for BMI, weight change and muscle change during chemotherapy.

Pathophysiology is characterized by a negative protein and energy balance driven by a variable combination of reduced food intake and abnormal metabolism [3]. IL-6 and TNF-α play important roles in inducing low skeletal muscle mass [27], mainly through stimulating muscle proteolysis and myocyte apoptosis [28]. Furthermore, deteriorated mitochondria are known to be associated with a loss of skeletal muscle integrity [29].

No treatment that leads to a gain of muscle mass in cancer patients has been defined to date. However, one recent report has shown that selumetinib promotes muscle gain in BTC [30]. Additionally, although there is little evidence of an effect of physical exercise on muscle strength, there is one report that showed ameliorated muscle proteolysis in experimental cancer cachexia [31]. Thus, increasing physical activity and muscle loading would be helpful for cancer patients.

The main limitations of our study were its retrospective design and the threshold values used to identify low skeletal muscle mass. The most frequently used cutoffs of sarcopenia in the Western population are 7.26 kg/m2 for men and 5.45 kg/m2 for women by dual-energy x-ray absorptiometry (DEXA) [32, 33]. Recently, these values were converted to CT measurements, which are correlated with the L3 skeletal muscle area and lumbar SMI (cm2/m2) [34–36]. However, low skeletal muscle mass defined by the cutoffs from previous Western studies may not be appropriate for a diagnosis of sarcopenia in the Asian population [37]. Therefore, we used ROC curve cut offs, the same method that was used in a previous report in Korea [13]. However, cutoff values in our study are different from those of previous reports on pancreatic cancer [13]. This observed difference in cutoff value may be attributable to different cancers, obese patients, or sex composition of the analyzed patient group. Thus, to validate our study, we used the cutoff value used in a previous study (52.4 cm2/m2 for men and 38.5 cm2/m2 for women) [38]; the results were similar to those of our original analysis (Supplementary Table 8). In addition, when we validated the current results using an ongoing study (selection of patients from “Biomarker discovery for predicting anti-cancer treatment response and prognosis in advanced gastric cancer, pancreatic cancer, biliary tract cancer and neuroendocrine tumor through prospective collection (from 2013) of human material: IRB No. H1306-069-497), we found that patients with low skeletal muscle mass had shorter OS than patients with non-low skeletal muscle mass; however, this result was not significant (Supplementary Table 9). Considering that is and ongoing prospective study, only sixty-two patients was analyzed; thus, further study and more patients are needed for a more robust analysis.

Finally, our study produced somewhat different results as compared to studies including other tumors, such as lung cancer [39]. However, ours represents a well-structured study on BTC, and provides a basis for further study.

We retrospectively enrolled consecutive patients with advanced biliary tract cancer (BTC) who were treated at Seoul National University Hospital (Seoul, South Korea) between 2003 and 2013. All patients fulfilled the following criteria: (1) BTC was histologically confirmed; (2) BTC was unresectable and recurrent; (3) body weight and height were recorded at the time of unresectable/recurrent BTC diagnosis; and (4) an abdominal computed tomography (CT) scan was performed within the 30 days prior to starting the first cycle of palliative chemotherapy. The medical records of each patient were reviewed and the following data were extracted: BMI, sex, age, anatomical origin of tumor, tumor localization, pathology, progression-free survival (PFS) and overall survival (OS).

CT scans performed upon diagnosis and progression date after first-line chemotherapy were used to quantify the initial area of L3 skeletal muscle. Two adjacent axial images within the same series, the third lumbar vertebra (L3), were selected for analysis of total muscle cross-sectional area (cm2) and averaged for each patient [17, 34, 40, 41]. Muscles were quantified within a Hounsfield unit (HU) range of -29 to 150 HU19 using Rapidia 3D software (v2.8; INFINITT Healthcare, Seoul, Korea) [13]. Muscle area was normalized to height in meters squared (m2) and reported as lumbar skeletal muscle index (SMI; cm2/m2) [13, 16, 17]. We used the area under the receiver operating characteristic (ROC) curve to determine the cutoff values for low skeletal muscle mass for both sexes.

Fisher’s exact and independent t-tests were used for continuous variables to compare baseline characteristics between two groups of patients. Logistic regression was used to identify factors associated with a decrease in SMI during chemotherapy. OS was calculated from the first day of palliative chemotherapy to the day of death, and PFS was calculated from the first day of palliative chemotherapy to the first day of progression or last follow-up. OS and PFS were estimated using the Kaplan-Meier method. A log-rank test was used to assess differences in OS and PFS across groups. The effect of patient characteristics and other prognostic factors, such as SMI or a decrease in SMI, on survival was evaluated using Cox proportional hazard models (univariate and multivariate analyses) and the resultant hazard ratio (HR) and 95% confidence intervals (95% CIs). A p value of 0.05 or less was considered statistically significant. All analyses were performed using SPSS software for Windows (version 20; IBM SPSS, Somers, NY, USA).

The study protocol was reviewed and approved by the Institutional Review Board of Seoul National University Hospital (IRB No.H-1306-109-500). The study was conducted according to guidelines (Declaration of Helsinki) for biomedical research.

This study was supported by a grant from SNU Invitation Program for Distinguished Scholar to Dr. Do-Youn Oh.